In 1926, a road with its eastern terminus at the corner of Michigan Avenue and Jackson Boulevard in Chicago, Illinois received its official designation as Route 66. With its catchy double-six road markers, this ribbon of asphalt and concrete stretched westward for 2,448 miles (3,940km) through three time zones and across eight states – Illinois, Missouri, Kansas, Oklahoma, Texas, New Mexico, Arizona, and California – to the shores of the Pacific Ocean at Santa Monica. Route 66 was one of the country’s first continuous spans of paved highway, linking the eastern part of America with the vast spaces and burgeoning new cities of the West. 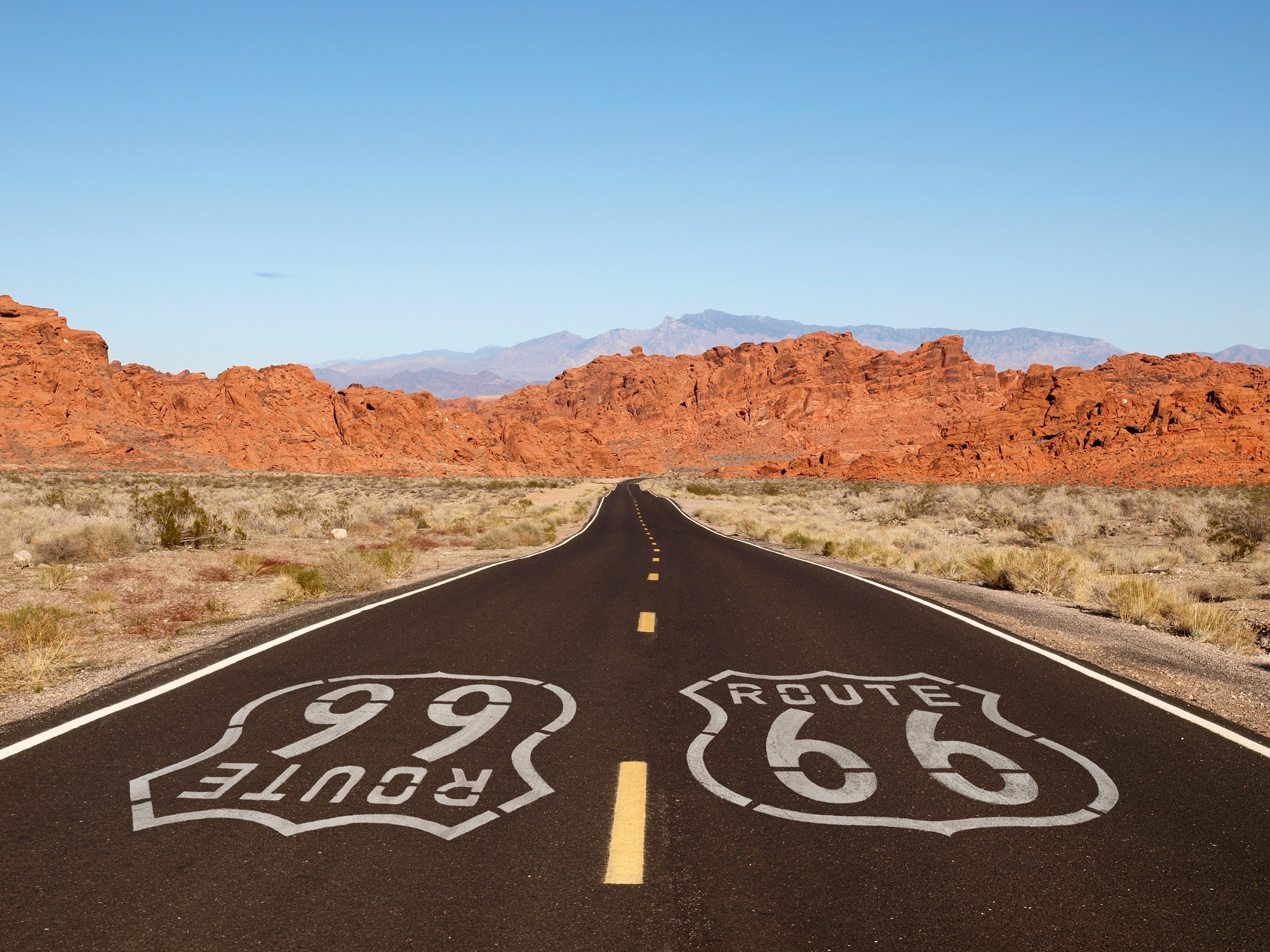 US Highway 66 reigns as the most storied highway in the annals of American travel. A recurring theme in American literature, Route 66 has been the star of more stories, books, songs, movies, and television shows than any other road. From the mid-1920s to the mid-1970s, it was more heavily traveled than scenic Highway 101 on the Pacific Coast, better known than the Pennsylvania Turnpike or the Alcan Highway, and surely better loved than busy US 1 between Maine and Key West, with its maddening traffic snarls around metropolitan New York. And before the advent of the interstate systems, US 66 came closer than any other highway to becoming the National Road. Route 66 was soon known as “the most magical road in all the world.” A legend was in the making.

And what a legend it would be. Nobody could possibly know how many Americans – from Oklahoma’s Dust Bowl refugees, to starry-eyed aspirants to Hollywood fame, to 1960s counterculture types “splitting for the Coast” – followed Route 66 on their way from their old lives to new ones in the California sun.

The nation first became aware of US Highway 66 when the 1928 International Transcontinental Foot Marathon (affectionately known as the Bunion Derby) tramped along the road from Los Angeles to Chicago, then on to Madison Square Garden in New York, a distance of 3,448 miles (5,548km). The winner was handed $25,000. Andy Payne, a part-Cherokee Indian from Oklahoma, won the purse.

Three decades later, for a fee of $1,500, Peter McDonald walked on stilts from New York City to Los Angeles, a distance of 3,200 miles (5,150km). From Chicago to Los Angeles, his way out west was Route 66. Pete was neither the first nor the last to place the road in the public eye – wild, weird, and wondrous celebrants were to follow. Two such celebrities were Happy Lou Phillips and his friend Lucky Jimmy Parker. The pair of intrepid travelers strapped on skates and rolled their way along America’s Main Street, as it was called, during their cross-country journey from Washington, DC, to San Francisco. Through the state of Arizona, a newspaper reported, “They walked a great deal, since at that time (1929) Route 66 was only paved through towns.”

Another student of perambulating the old highway was “Shopping Cart” Doughtery, who, sporting a white beard and turban, traveled 9 to 16 miles (14 to 26km) a day on Route 66 with all his worldly possessions in a shopping cart. History doesn’t tell us the final destination of Doughtery. 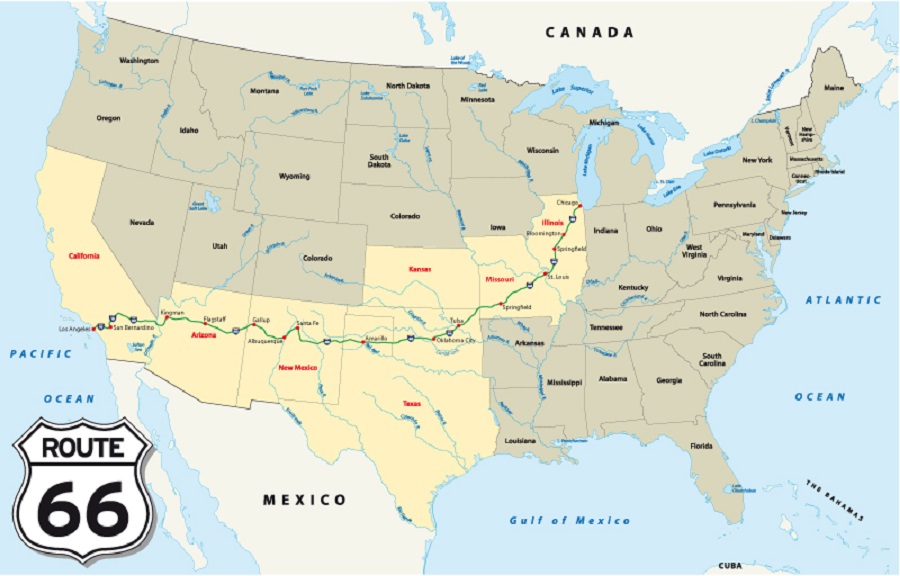 In 1972, John Ball, a 45-year-old South African, jogged from California to Chicago on Route 66, and then became a hero on the East Coast. The journey took 54 days.

The Mother Road has also seen its share of high school baton twirlers, who have marched along Old 66 setting dubious records.

In the Roaring Twenties, desperadoes and bootleggers – the likes of John Dillinger, Al Capone, Bugs Moran, Bonnie and Clyde, and Ma Barker and her god-fearing boys – lurched down Old 66, using it as an escape route. Occasionally, the Associated Press warned travelers of the dangers of “the criminally few who mix with the tourist throng.”

Through good times and hard times, the highway became a symbol of faith for the future. Novelist John Steinbeck set the tone of the highway in his Pulitzer Prize-winning book The Grapes of Wrath, when he found a nurturing quality in Route 66 and called her “the mother road.” It was the “Road of Second Chance.” To some, like the immigrants of the Dust Bowl, it was the “Glory Road.” To architect Frank Lloyd Wright, it was the chute of a tilting continent, on which everything loose seemed to be sliding into Southern California. And to travel agencies it was the chosen thoroughfare of the growing numbers of discriminating American tourists.

Route 66 was to carry a sundry of names at different locations throughout her history – names like the Pontiac Trail, Osage Indian Trail, Wire Road, Postal Highway, Grand Canyon Route, National Old Trails Highway, Ozark Trail, Will Rogers Highway, and, because it went through the center of so many towns, the Main Street of America. 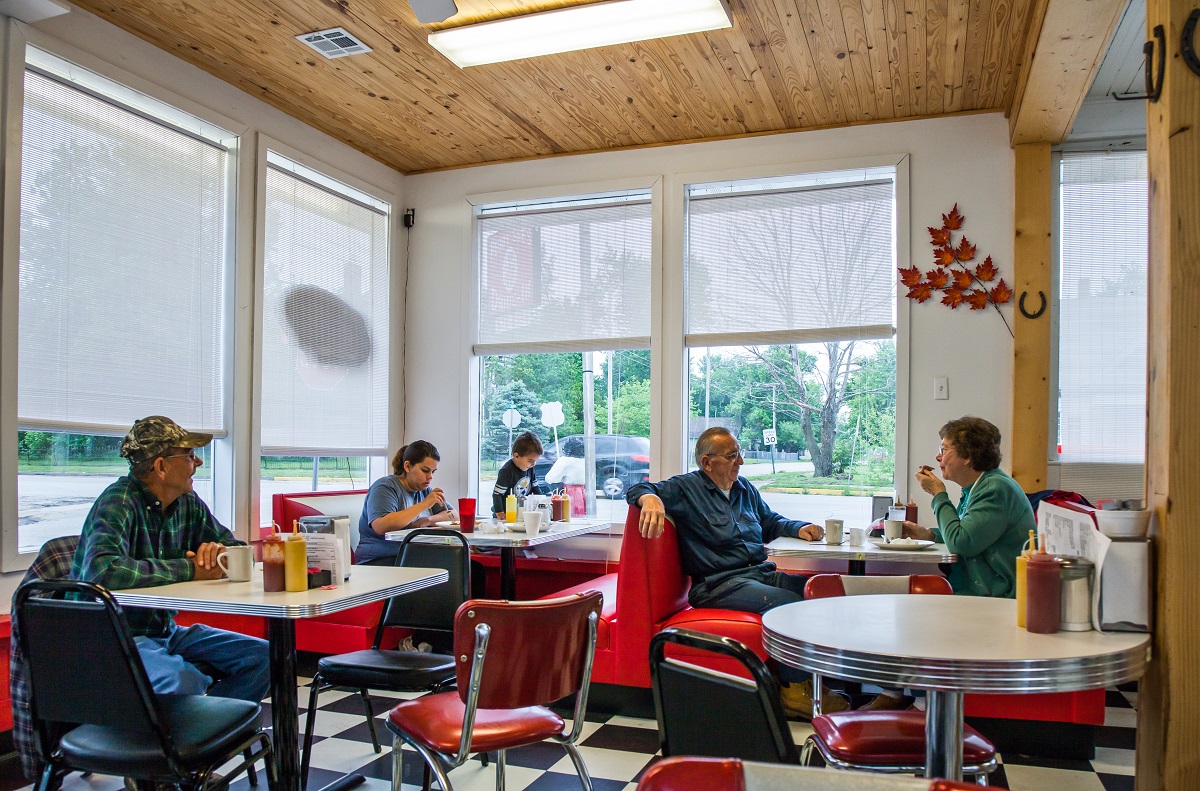 Route 66 was hundreds of locally improved and maintained lanes going from one town to the next. In Vega, Texas, a story – probably sprinkled with a little local folklore – is told of the town’s baseball team. They wanted to play the team in a nearby community but there was no connecting road. So the ambitious folks in this small Texas town built one. Today, that former deep-rutted path is said to be part of Route 66.

Route 66 was all-night radio out of Del Rio, Texas, Continental Trailways, and Greyhound buses, lemonade stands, family reunions, 25 cents haircuts, and a 5 cents cup of coffee. Kids counted telephone poles on the road, waved at engineers on trains, slept in a wigwam in Holbrook, Arizona, and signs in New Mexico promised “Tucumcari Tonight.”

“Route 66,” Bobby Troup’s hit song of 1946, became a highway national anthem. Originally crooned by Nat “King” Cole, the simple tune went on to be immortalized by Bing Crosby, Chuck Berry, The Rolling Stones, and a host of other recording artists – at last count over 100 of them. Nothing captured America’s love affair with the road more than this song.

It celebrated the end of World War II, and the end of gas and food rationing. The lyrics invited Americans to get their kicks on Route 66, and millions of motoring adventurers, addicted to the smell of gasoline and the drone of rubber on the pavement, took Bobby’s suggestion to heart.

Americans with itchy feet were ready to hit the road. They removed the musty canvas that had covered and protected the Plymouth ragtop and the Oldsmobile Woody since the outbreak of the war. And although the cars had been stored on blocks, folks replaced the prewar tires with a set of six-ply Allstate clinchers at a total cost of $43.80. Vacationers shined up their new postwar sedans and thumbed through state maps and plotted a course on the road to adventure – Route 66.

Mom wrote “Wish you were here” messages on picture postcards. The kids bought rich, gooey Pecan Log Rolls at Stuckey’s Candy Shoppe while Dad filled the gas tank at 17 cents a gallon and bought the entire family sticky, orange-flavored Popsicles out of the freezer.

The toll fare at the Chain of Rocks Bridge over the mighty Mississippi River was 35 cents per automobile, and brightly colored signs on the outskirts of St Louis, Missouri advertised “the Greatest Show under the Earth” at the nearby Merimac Caverns.

The 1950s saw Route 66 reach genuine celebrity status. Families could leave their homes in the East and Midwest and drive to the Painted Desert or Grand Canyon. They could drive all the way to the Pacific Ocean on a highway that passed through towns where the young outlaw Jesse James robbed banks, where Abraham Lincoln practiced law, and cross the great river Mark Twain wrote about. Tourists could see snake pits and caged wild critters and mysterious caverns and real-life cowboys and Indians, and visit Mickey’s Magic Kingdom in Disneyland, California.

Route 66 reached even greater popularity when a nomadic potboiler of a book by the same name as the highway became a hit TV show from 1960 to 1964. route 66 (yes, the “r” was not capitalized in the show title) was the story of two young adventurers, Buz (George Maharis) and Tod (Martin Milner), getting their kicks on Route 66 in a Corvette. Among its 116 episodes, few were actually filmed on Route 66. Sponsored in part by Chevrolet, the show itself inspired more Corvette sales than any TV commercial, and established the Vette as an American icon.

When the Federal Highway Act of 1956 called for the construction of interstate systems throughout the United States, it looked as if the bright lights of fame and fortune that had shone on Route 66 for so many years were beginning to dim.

The last stretch of Route 66 was bypassed in 1984 at Williams, Arizona, when the old highway was replaced by Interstate 40. There was a ceremony, almost a wake. Bobby Troup, since deceased, was there to give a speech. As tears streamed from his eyes, he called the occasion “a very sad day.”

In 1985, US Highway 66 was decertified, giving way to superhighways of diesel fumes and fast-food chains. Because the road is no longer classified as a federal highway, some folks will tell you the road is no longer there. For a while, the route that symbolized America’s love affair with the open road seemed destined to live on only in memories and museums.

But progress does not necessarily conquer all. Beyond the endless blandness of the interstates, there is a powerful rhythm in an old two-lane highway that still rises and twists and turns across rolling hills, the mountains, and the deserts. Slowing through quiet towns, then rushing on and up again to the next ridge, you’ll find the road waiting to be discovered in each of the eight Route 66 states. 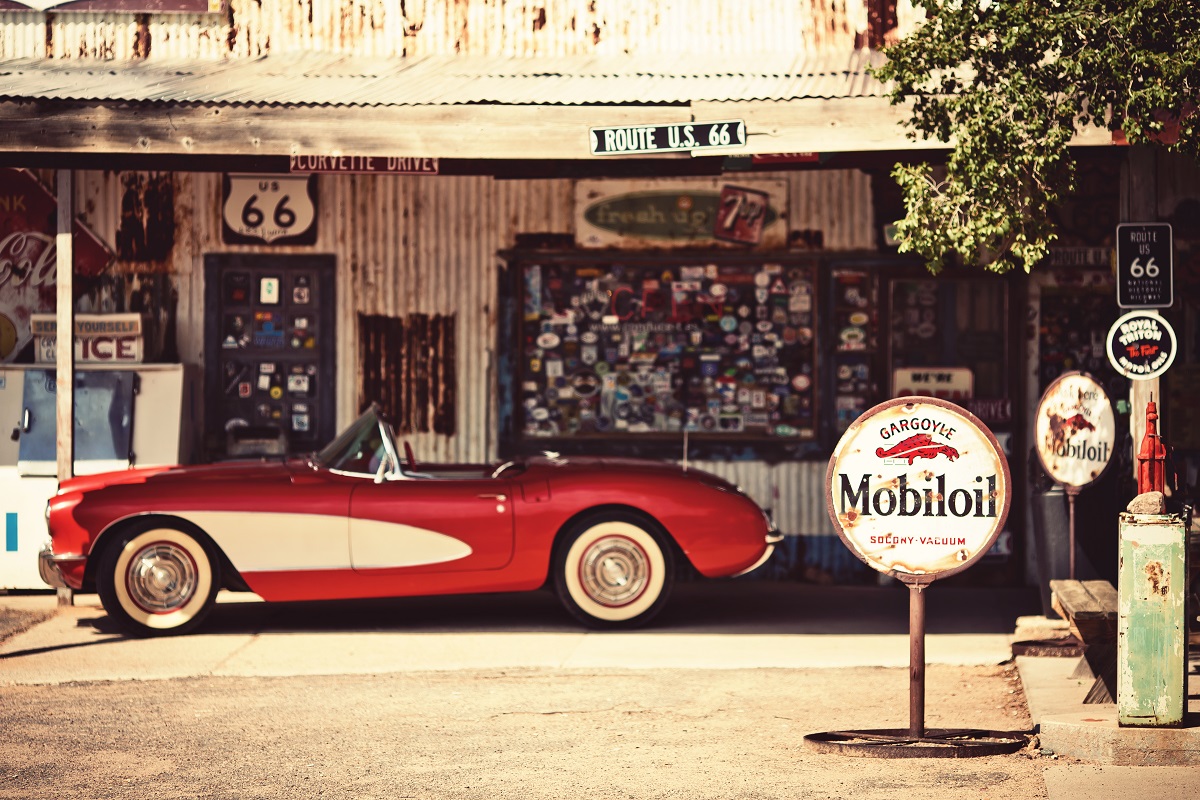 In rural areas you may come across abandoned and decaying remnants that pay an evocative tribute to the heyday of Route 66. Elsewhere, however, cafés and roadside attractions have been revived, restored, and reopened. Vintage Wurlitzer jukeboxes blare out old road songs. Folks in classic cars cruise into a drive-in for a hamburger and shake. Service station attendants offer to check under the hood and wash the windshield. Family-owned restaurants serve homemade pie, and a waitress in a starched pink uniform still calls you “Hon!” and yells at the cook. The old road still beckons pilgrims not only from across the US, but from nearly every compass point of the world.

With the car open to the wind, and an AM station riddled with static from a thunderstorm on the horizon, memories flicker in the sweetness of the moment. The miles themselves dissolve every question except the one that matters. What lies waiting, there, just over the next rise of Route 66? 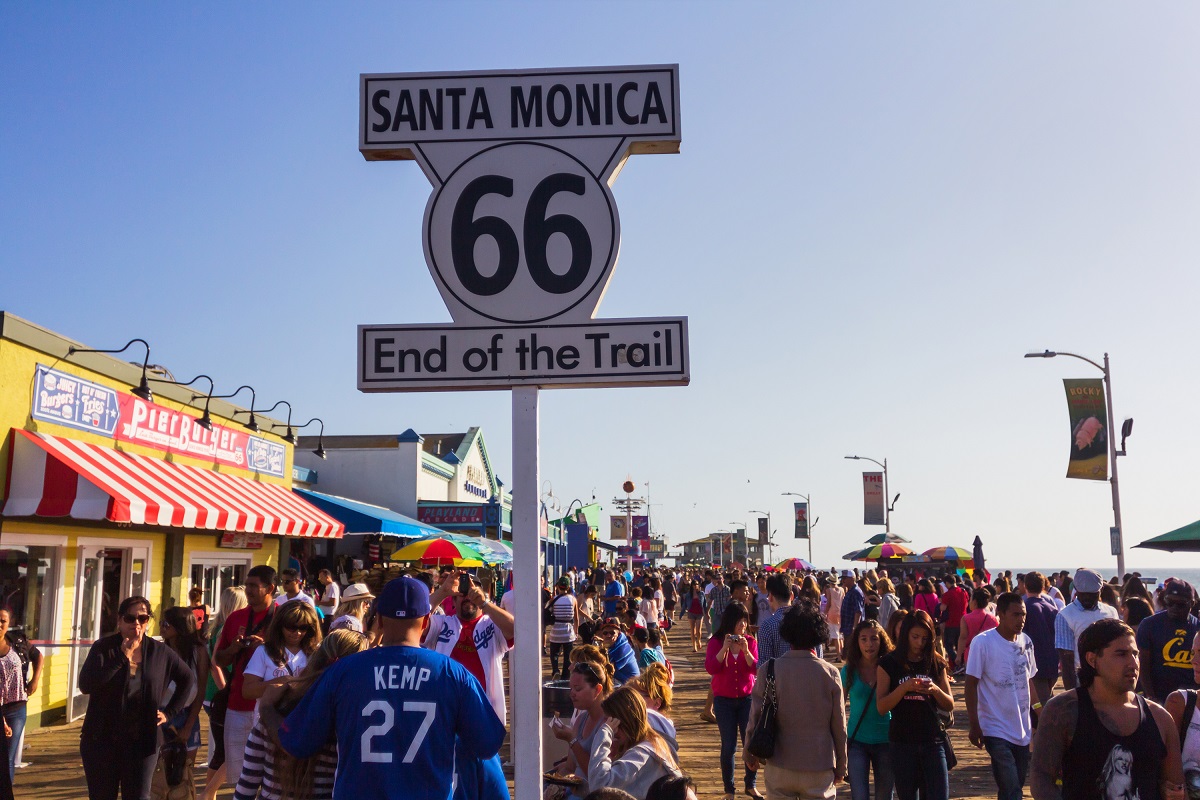