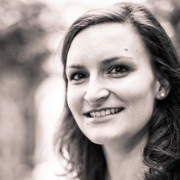 In depth: Singapore after dark

Singapore has undergone a remarkable transformation into a lively arts and entertainment hub. Whether it’s a night of pub-crawling or one of non-stop clubbing, the options are plentiful 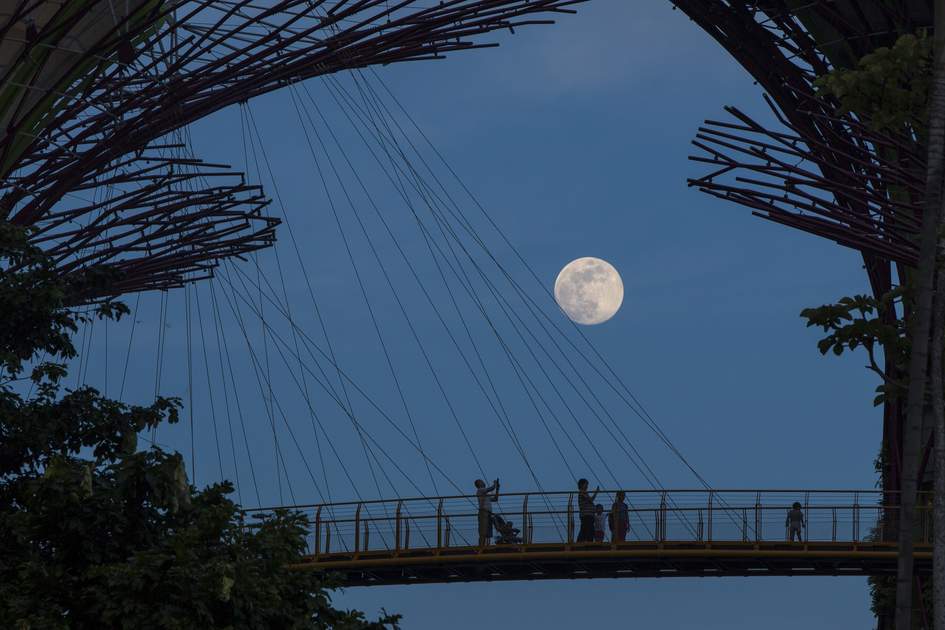 Over the last few years, Singapore has been taking itself less seriously...

Not only is it the first city in the world to host a Formula 1 night race, some clubs operate till the early hours in the morning, a reverse bungee-jump outfit sends people hurtling into the night sky, busking is no longer illegal, gay bars make no bones about their inclinations, and gambling in luxury casinos is the talk of the town – after eating and shopping, that is. Sticky issues still exist – sugar-free “therapeutic” chewing gum is only available after giving your name and ID card number to the pharmacist – but Asia’s little red dot is having a fine time playing hard and still working as hard. And if you reach down deep enough, you’ll hit the underbelly of Singapore society – as vibrant and decadent as the best of them.

The art of entertainment

There is an incredible number of arts and entertainment events throughout the year for a tiny city like Singapore. Arts venues such as the stunning Esplanade – Theatres on the Bay offers a year-round calendar of events, both free and ticketed. The Arts House, an arts venue overlooking the Singapore River that was transformed from the historic Old Parliament House, serves up a refreshing line-up of cultural, visual and performing arts events. In 2006, Singapore staged its first biennial international visual arts event, the Singapore Biennale. The Singapore Arts Festival takes place each June.

The National Arts Council, the government body that looks after Singapore’s cultural soul, organises year-round free concerts at lush Singapore parks. Other annual fixtures are the Mosaic Music Festival,  the Singapore Night Festival and the Singapore Dance Theatre’s Ballet Under the Stars series.

New Broadway-destined shows with an Asian focus occasionally premiere in Singapore, while long-running shows like Phantom of the Opera and The Lion King have made appearances here. Throughout the year, Marina Bay Sands’ theatres showcase a huge variety of Broadway musicals such as Wicked and Hairspray.

All these exist alongside a very healthy Singapore theatre scene, which features both locally written and produced works and international collaborations. Wild Rice, a theatre company that creates “glocal” works inspired by Singapore society and universal issues, has showcased its productions in cities such as Wellington (Animal Farm, 2004), Moscow (Generation/s, 2008) and Hong Kong (Animal Farm, 2010).

The Singapore Repertory Theatre is most associated with Broadway-scale productions which bring together the world’s most talented Asian stars – like David Henry Hwang, Lea Salonga, Pat Morita, Tsai Chin and Shabana Azmi – along with award-winning directors, playwrights and lighting, set and costume designers. It has also presented productions starring international actors such as Ian McKellen, Ethan Hawke and Kevin Spacey. Its  productions include A Midsummer Night’s Dream, Much Ado About Nothing and Richard III. Recent local productions include Red Riding Hood and The Tale of the Frog Prince.

Take a trip to Singapore with the Insight Guides experts. Find your urban adventure here 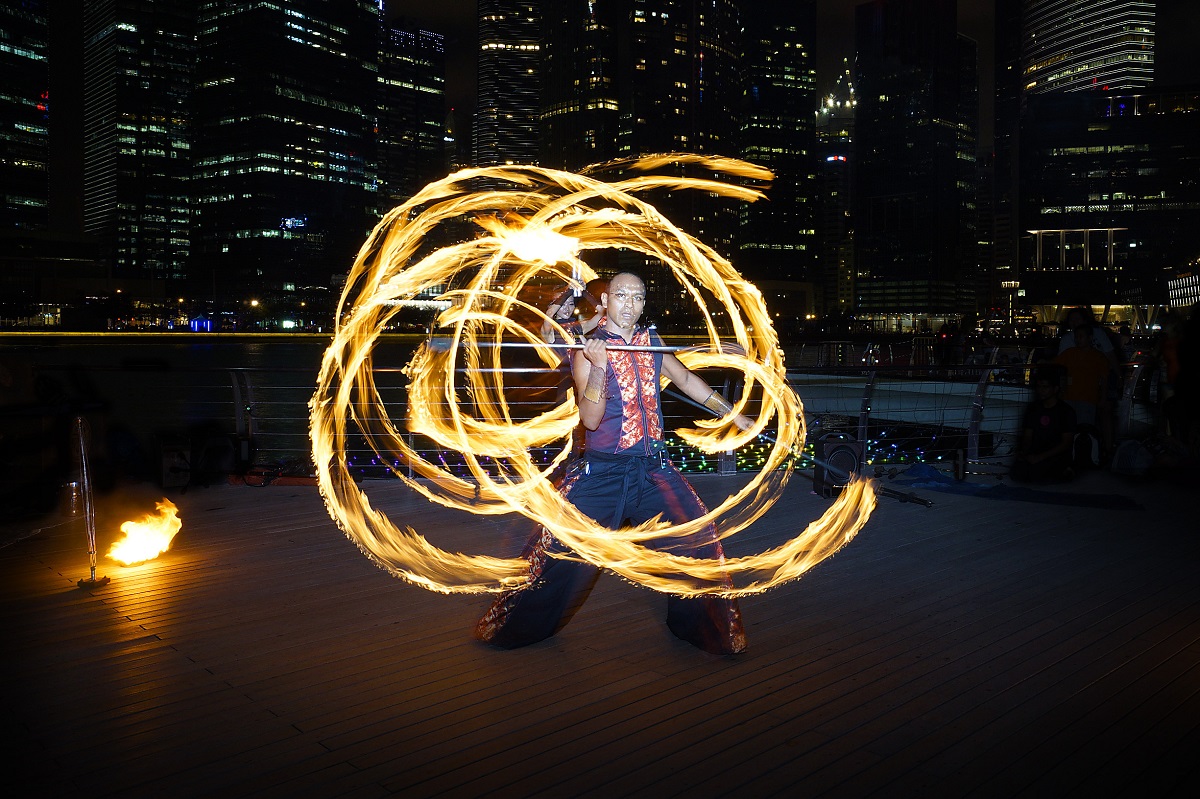 Classical music in Singapore revolves around the Singapore Symphony Orchestra, which traces its history back to 1979. The critically acclaimed orchestra gives more than 50 concerts a year at Esplanade – Theatres on the Bay. Its repertoire tends to be mainstream; most concerts comprise the standard overture, concerto and symphony, but it also performs more accessible classical and contemporary music. Big names that have performed with the SSO include percussionist Evelyn Glennie and tenor José Carreras.

Dance in Singapore is dynamic, with a corps of dancers and choreographers moving between projects and ensembles. The most important is the Singapore Dance Theatre, with a repertoire ranging from The Nutcracker and Sleeping Beauty to contemporary dance. Choreographer Jamaludin Jalil’s Juxtamotion, and Paul Ocampo’s Who Cares? set to the music of the pop group Queen have all entered into its repertoire, and some have been included in overseas tours.

Recent years have seen the local film industry grow at an unprecedented rate, with a glut of high-grossing films tackling social issues with both humour and style. Local directors such as Jack Neo, Eric Khoo, Kelvin Tong, Tan Pin Pin, Royston Tan and Anthony Chen are increasingly enjoying the limelight at home and overseas with their award-winning movies and short films. Singapore’s young film industry has far outstripped its sister, the television industry, in terms of quality and depth.

For the visitor, it’s no longer a matter of luck or timing when it comes to catching a well-produced local film. The Sinema+GV, a Golden Village and Sinema initiative, provides showcase and exhibition opportunities for Singaporean and Asian independent filmmakers to present their non-mainstream films. These films are screened every second and forth Wednesdays of the month from 7pm onwards. Limited seats are available exclusively at GV Grand, Great World City. Film buffs can also catch art-house flicks at The PictureHouse at the Cathay Building, Cinema Europa at VivoCity and The Arts House.

The moviegoer here is spoilt for choice. Virtually every shopping mall in Singapore boasts a multi-theatre cineplex, albeit screening mainly Hollywood pulp fare, up to six times a day. Midnight shows in the past were confined only to weekends, but today movie-lovers can watch all-night movie marathons. At Cathay Cineleisure on Orchard Road, for instance, movies on Fridays, Saturdays and the eves of holidays run overnight until the crack of dawn. Golden Village Cineplex in Great World City on Kim Seng Road offers – for a price – plush sofa-style seats for two, with the option to enjoy a meal as you watch the movie. 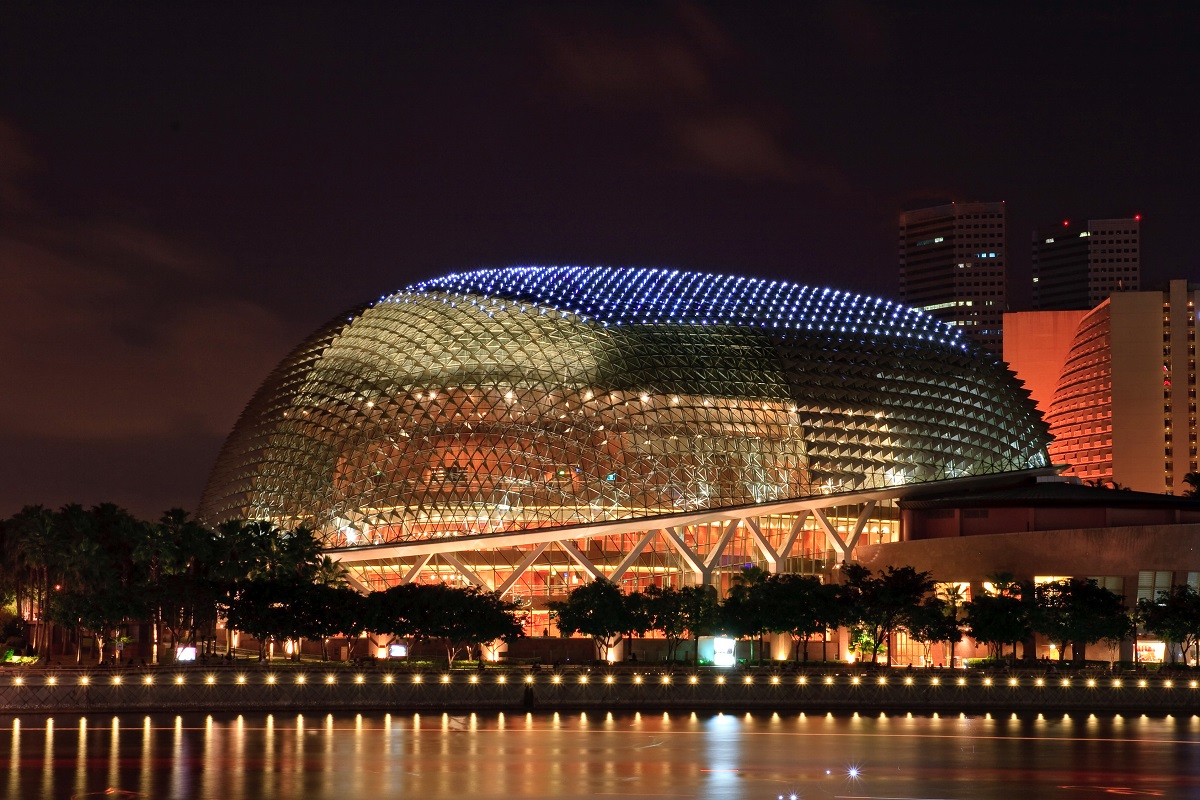 Singapore offers plenty of nightlife choices. There is a bar or club to suit every taste and quirk. If you don’t have much time and want a definitive after-dark experience, a multi-venue destination could be the answer.

St James Power Station at HarbourFront opposite Sentosa Island was formerly a coal-fired power station; it’s been given a new lease of life as a multi-venue hotspot – with a total of nine party outlets. Among the various outlets, The Gig is a hotspot for live music fans, and Mono is the place to enjoy karaoke sessions.

Better known in international clubbing circles is Zouk, at Jiak Kim Street, whose diehard fans continue to worship it as the ultimate in cool. Zouk plays a diet of edgy underground and house music, and has hosted in the past DJ luminaries like Paul Oakenfold, John Digweed and Sasha. The annual ZoukOut, which began in 2000, is now touted as Asia’s largest outdoor dance-music festival. This beach dance party held in December at Sentosa’s Siloso Beach lures in throngs of clubbing fans to party from 8pm to 8am.

The Butter Factory at One Fullerton is another spot where beautiful people gather for its cutting edge electronic music. Boat Quay might be considered just for tourists, but a fair amount of locals can be seen stumbling out of the bars here too. Favourites include Harry’s (where they have a cocktail, Bank Breaker, named after Nick Leeson, who brought down Barings in 1995 and used to hang out in this bar) and The Penny Black, where you’ll get a feel of Victorian England. Many bankers from the CBD area throng these bars after work.

Further along the river is Clarke Quay,  which lures tourists to its restaurants, bars and dance clubs. Home-grown favourites at Clarke Quay are Attica/Attica Too, where DJs spin everything from hip-hop to electronic dance, and The Pump Room, where hot local band Culture Shock performs nightly (except Mondays).

Sentosa offers beachside party options such as Azzura Beach Club, a multi-level entertainment, dining and hydro-sports complex, and Tanjong Beach Club, which offers refreshing cocktails and bites in a chill-out beach bar setting. The latter throws massive full moon parties three times a year. The opening of the integrated resorts in 2010 has also added many vibrant nightlife options. including Ku De Ta, perched on the magnificent Sands SkyPark, and Pangaea at the Crystal Pavilion.

For those seeking a quiet drink, there are a large number of chic bars and lounges, many with alfresco seating. Located by the Singapore River is Bar Opiume at Empress Place (next to Asian Civilisations Museum), a sophisticated chill-out place.

Some hotels are famous for their hotspots, such as Martini Bar at Grand Hyatt, New Asia Bar and City Space at the Equinox Complex at Swissotel The Stamford, and Post Bar at the Fullerton Singapore hotel. One of the top tourist bars is The Long Bar at Raffles Hotel, where guests can down glasses of the iconic Singapore Sling while enjoying live music by the resident band.

New, trendy independent bars with a focus on sophisticated cocktails have popped up mainly in the Chinatown area. They include The Cufflink Club, Jigger & Pony, 83 Club Street and Bitters & Love.

If jazz is your thing, there are a couple of places worth checking out. Near Arab Street, local jazz acts can be found bringing the house down at Blu Jaz Café, while over at Sultan Jazz Club, international and local acts offer sophisticated jazz in a relaxed environment.

Theme pubs are popular; among the long-standing favourites are Hooters at Clarke Quay with its well-endowed waitresses (enough said) and Ice Cold Beer on Emerald Hill for 9-inch hotdogs and 30 varieties of ice-cold beer. Paulaner Brauhaus at Millenia Walk is a German microbrewery specialising in freshly brewed light and dark lagers, while Que Pasa at Emerald Hill is an old shophouse converted into a Spanish-inspired bar serving tapas, sangria and cigars. Irish pubs are found all over Singapore – the bars of Molly Malone’s at Circular Road near Boat Quay  and Muddy Murphy’s at 313 Somerset were reportedly built in Ireland, taken apart, shipped to Singapore and painstakingly reconstructed.

Singapore is one of Insight Guides' top 17 places to visit in Asia this year. Find out why here 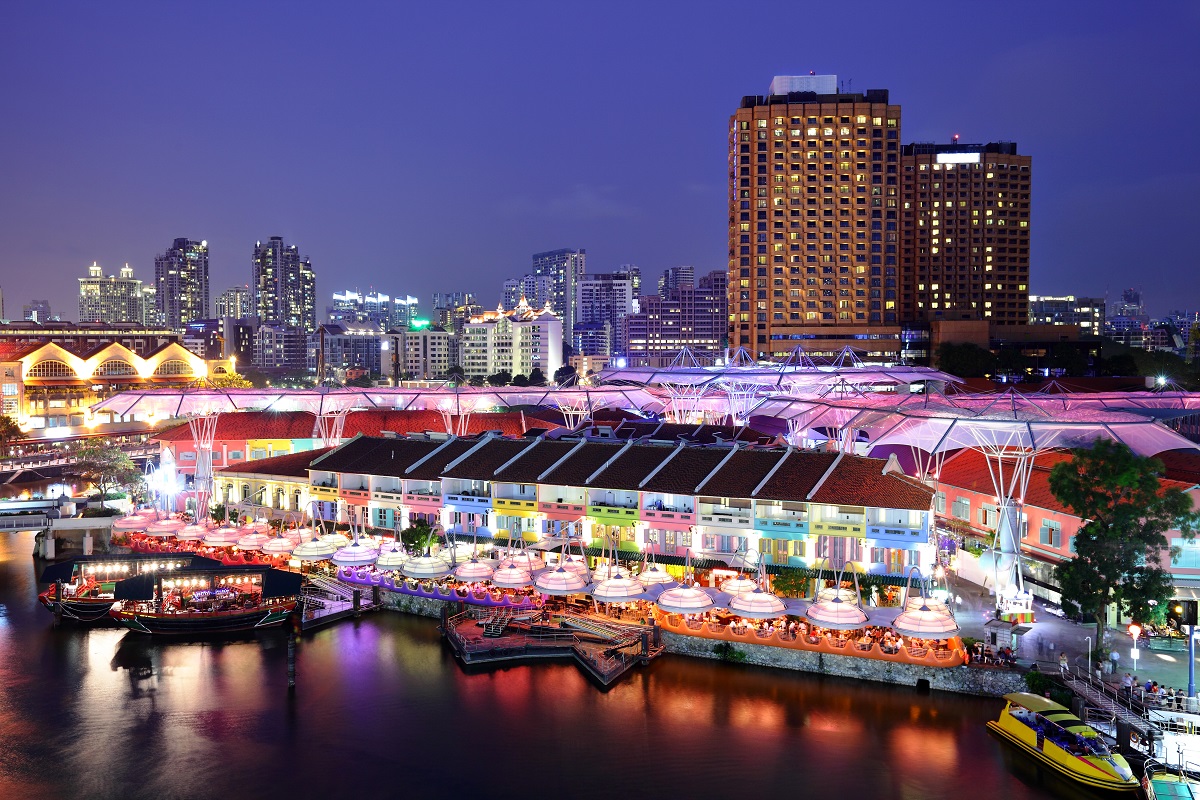 Karaoke lounges are everywhere, with membership clubs offering private rooms for rowdy sessions without punishing other patrons. K-Box Karaoke Lounge has about a dozen outlets in Singapore, and is open until 3am – when no one cares any longer who’s singing what. Some outlets even have extended hours on some nights. Another popular place for karaoke fans is Part World KTV which has outlets in Liang Court, near Clarke Quay and VivoCity.

Yet another underworld is Claymore Rise near Orchard Towers in Orchard Road, packed with “working girls” and their agents. If you are female and alone, don’t choose this as a meeting place – unless getting unwanted overtures or the sleazy eye from agents doesn’t faze you. Inside Orchard Towers are well-known pick-up joints like Ipanema.

All-you-can-drink alcohol buffets, drag nights, sex-for-sale joints disguised as health clubs and gyms, it’s all here in Singapore, if you know where to look and who to ask.

Plan your trip: When to go to Singapore

Everything you need to know: Singapore travel guide

What to do on your holiday: 5 things to do indoors in Singapore

Know your otak otak from your laksa: The best of Singapore street food