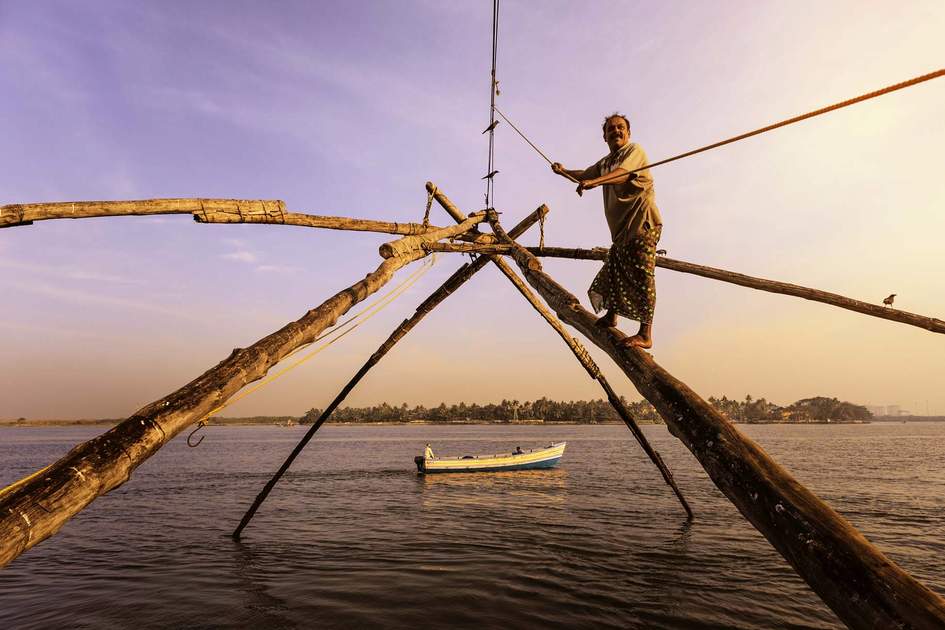 What is most distinctive about Fort Kochi (formerly known as Cochin), especially viewed from the sea, is its skyline. Giant contraptions that seem to be from another world dominate the coast all around the Fort: these are the Chinese fishing nets, unique to this part of Kerala and living symbols of a centuries-old Chinese influence on this coast. The palm-woven, broad-brimmed conical hats the fishermen wear are yet another reminder that the Chinese had a thriving settlement in this part of India, as are the roofs of many buildings in Kerala which turn up slightly at the corners, the China firecrackers that explode with a thunderous noise, and clay jars distinctly in the Chinese style.

These fishing nets are as effective as they are dramatic. Ingeniously constructed, these giant cantilevered fish traps comprise coconut trunk platforms on elephantine teak-log legs stuck solid in the beach, and supporting teakwood frameworks and extended poles from which hang giant nylon nets. The net, tied to four poles that link it to pulleys and counterweights, is lowered into the water by ingenious use of the counter-balancing rocks and then hauled out of it 15 minutes later by a team of four manning each platform. By pulling on the rope with the counterweights, the team raises the net to platform level; then one of the team members climbs up one of the poles from which the net hangs and skilfully scoops the catch into a basket, and back goes the net into the water again. Except during the May–August monsoon season, the nets are worked throughout the year.

See this unique sight for yourself on our Magical Kerala trip, which includes all of the region's top sights and experiences.