Fountain detail on Piazza della Rotonda in Rome 28 May 2016 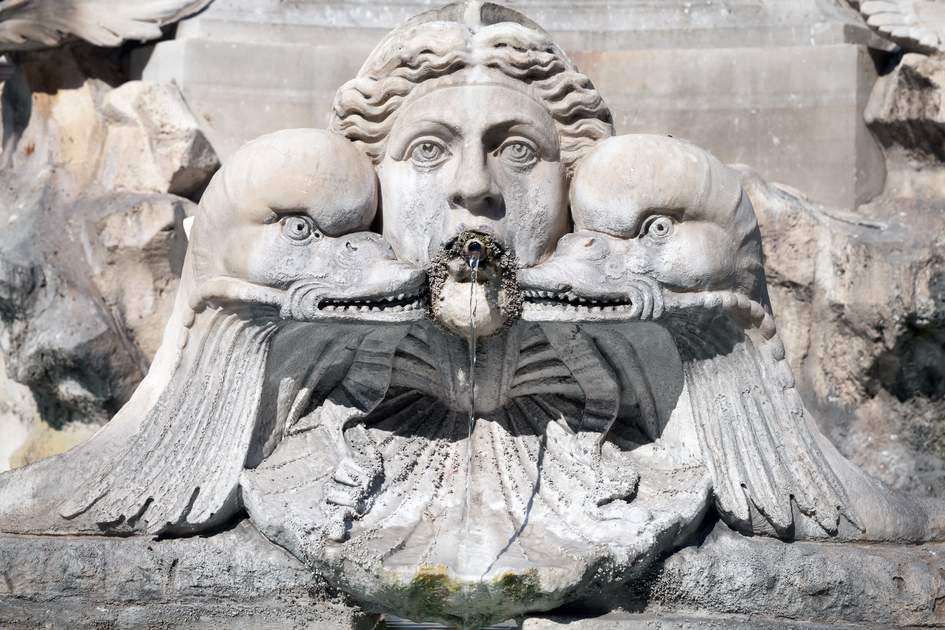 Rome's Piazza della Rotunda is the location of the Pantheon, famed for its exquisite dome.

A perfect hemisphere, and a symbol of beauty and harmony, the Pantheon dome had a profound impact on the architects of the Renaissance, influencing Brunelleschi’s cathedral in Florence and Michelangelo’s design for the dome of St Peter’s. The height of the dome is the same as its diameter: 43.3 metres (142ft). The hole (oculus) in its centre is still the only source of light. On sunny days a beam of light pours through the oculus and moves around the Pantheon’s interior, illuminating the frescoes and tombs. Originally, the dome was covered in bronze, but the Byzantine emperor Constans II stripped the outer layer off and took it to Constantinople in 667. Almost 1,000 years later, in 1620, the Barberini Pope Urban VIII had the inner layer melted down to make cannons for Castel Sant’Angelo and Bernini’s baldacchino in St Peter’s. This act of papal vandalism inspired the quip that “What the barbarians didn’t do, the Barberini did”. Every year on Pentecost, a shower of rose petals falls through the Pantheon’s open oculus thanks to a group of firemen who scale the exterior wall of the Pantheon and this sight is almost as interesting as the petal rain itself.

Let's just say there's a reason artists and poets have nicknamed Rome the  Eternal City. It is far and away one of the world's most romantic and enchanting travel spots. It's a place that brilliantly mingles ancient and modern. It's impossible to wander the streets without stumbling upon remnants of its rich past; ancient remains, revered pilgrimage sites, and so on. To discover the city is to stroll down narrow, winding streets, with majestic old buildings at every turn.

History lovers can marvel at the awe-inspiring Colosseum and the ruins of the Roman Forum. Meanwhile, early Christian basilicas and peeks of medieval Rome only add to the old-world charm and grandeur.

To visit this Italian metropolis is to practise the essential art of slowing down. The pace in Rome is slow. Unlike many Western cities, especially in the US, the manic rush and hustle-and-bustle is all but nonexistent here. Instead, locals seem to take their time, drinking in the slower way of life. As a tourist, it can be a refreshing (and welcome) change of pace. And, as the saying goes, 'When in Rome, do as the Romans.'