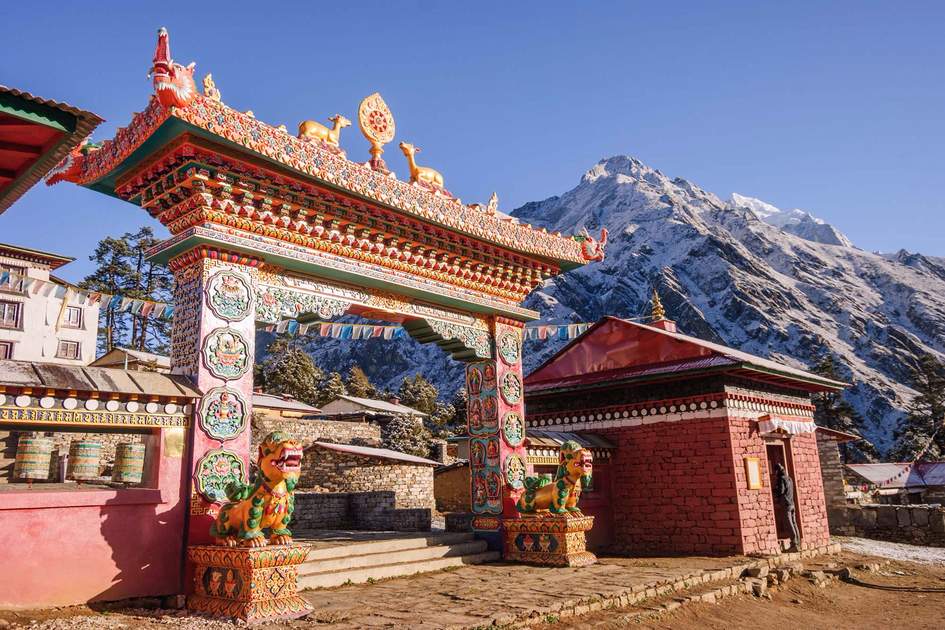 The monastery of Thyangboche, rebuilt after a fire destroyed the original buildings in 1989, is one of the Everest region's most important and beautiful cultural centres. Thanks to donations from the Sherpa and international communities, the monastery has been rebuilt in an almost identical style to its predecessor. The monastery is perched on a forested promontory at 3,867 metres (12,684ft). From here Ama Dablam (6,856 metres/22,493ft), Everest, Nuptse (7,879 metres/25,850ft) and Lhotse (8,501 metres/27,890ft) create a perfect tableau to the north. A Sherpa Eco Centre, with informative displays explaining the religious and home lives of Sherpas, and several lodges share the meadow site – a popular campsite for group treks. The Thyangboche Development Project has developed the area’s infrastructure, installing hydropower and telephone connections.

Thyangboche is also the best-known location of the Mani Rimdu festival, a dance-drama in which monks dressed in painted masks and silk robes perform ritual dances depicting Buddhism’s subjugation of the ancient Bön religion.

Visit the monastery of Thyangboche on a trekking adventure as part of our Exclusive Everest trip, which takes in several other exhilarating treks as well as a visit to Nepal's capital city, Kathmandu.

Probably the best trip of my life. The sites, the hotels, and the tours were all superb.