Posted on 10 Jul 2016
Waterfalls in Plitvice National Park, Croatia. One vivid turquoise lake flows into another. 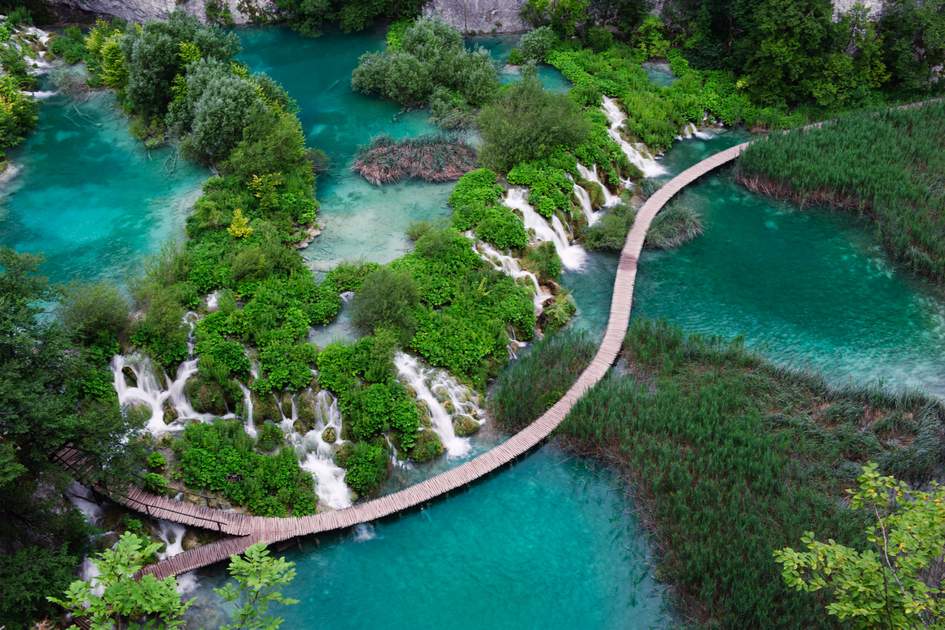 Waterfalls in Plitvice National Park, Croatia. One vivid turquoise lake flows into another.

Plitvice National Park is one of Croatia’s most popular tourist attractions. Call them emerald, call them turquoise, call them what you will, but
the tumbling waters of Plitvice are undeniably a visual circus as they bubble and churn their way through a series of 16 densely forested lakes.
Already protected as a national park, Plitvice Lakes earned a place on the Unesco World Heritage List in 1979, a fact that failed to deter rebel Serbian forces from trashing the park and looting its hotels between 1991 and 1995.

Today Plitvice has recovered its tranquillity and it makes an excellent place to spend a day or, better still, several days. A variety of wildlife, including the occasional bear, shares the park with humans in relative harmony. The best places to stay are the three park hotels (some rooms have views of the park and lakes), as negotiating the car parks and fighting for a space can be a problem for those travelling in
from outside. There is also a campsite.

Getting around the park is straightforward once you have paid the admission fee, which includes using the boats and tourist trains that aid getting around. There is a variety of trails, all linked by the trains and boats, and plenty of information assistants are on hand at the two entrances. Try to visit the most popular parts of the lakes in the early morning or late evening when there are fewer people and the ever-changing light creates fabulous effects on the greeny-blue waters. To escape from fellow visitors, try heading for the more remote
upper lakes to the south by taking the boat across Lake Kozjak (the park’s largest lake) from Entrance 2 and following the path that skirts Lake Gradinsko. Just past the lake is a series of spectacular waterfalls. From here proceed on the trail south past the Labudovac Falls to Lake Prošćansko. The vast, tree-shrouded Lake Prošćansko looks more like something that you would expect to find in the US or Scandinavia than in this corner of Europe. Be careful not to follow the rickety wooden walkway around the lake as this leads to a dead end requiring a dangerous jump on to the lake shore. Instead, head for the train pick-up point and then keep on south past the waiting passengers. Alas there is no lakeside trail and so you have to make do with the road, but there are few other visitors up here. A little way along there is a disused wooden pier where you can relax and take in the view in peace.

From Lake Prošćansko it is also possible to embark on a 7km (4-mile) trek up to one of the sources of the water that runs through the park. Ask at the park information kiosks as the main maps do not mark this route. With the lower lakes so overrun by tourists in high season it is tempting just to stay in the quieter southern half, but in doing so you would miss out on some of the most impressive scenery. Again, take a boat from the hotels near Entrance 2 across Lake Kozjak, but this time take the boat heading north to the far end of the lake, where you can stop for a lunch of spit-roasted chicken before carrying on. There is a small beach here but, as in the rest of the park, swimming is strictly prohibited. The path cuts away from the boat landing and down a series of waterfalls and small lakes that are criss-crossed by paths and
wooden walkways, the scene hemmed in by limestone cliffs on both flanks. The culmination is Veliki slap, the park’s largest waterfall, a spectacular drop that sprays onlookers with a gently cooling mist.

While one can negotiate the park on a rushed day trip, it is a much better idea to allow a couple of days.

Guiding you through the park's highlights Insight Guides: Croatia is an unforgettable trip accessory.

Hello " Beyond expectation " is the way I would describe your travel plan for us. The accommodations were well diversified from historic to new luxury which allowed us to experience two worlds of living. The Vans were very comfortable and the drivers excellent in knowledge as well as interesting and humorous and safe. The guides were exceptional in all respects, the food experiences a real pleasure and the wines superb. Many times I am asked by service providers. "how could we improve?" I really think you have, and are the perfect team, a dream accomplishment in business. After travelling to over 50 countries Croatia with you rates in the very top. Thanks for designing our trip, then keeping us on track by the day with your experts. Every aspect of your services was indeed "beyond expectation".

Croatia Game of Thrones and Highlights