For Harry Potter fans, the big screen certainly isn't the only place to scratch that wizarding itch. In fact, there are a host of real-life destinations filled with all the mystery and magic you'd expect to find at Hogwarts castle. Here is our guide to 17 Harry Potter vacation ideas around the globe. 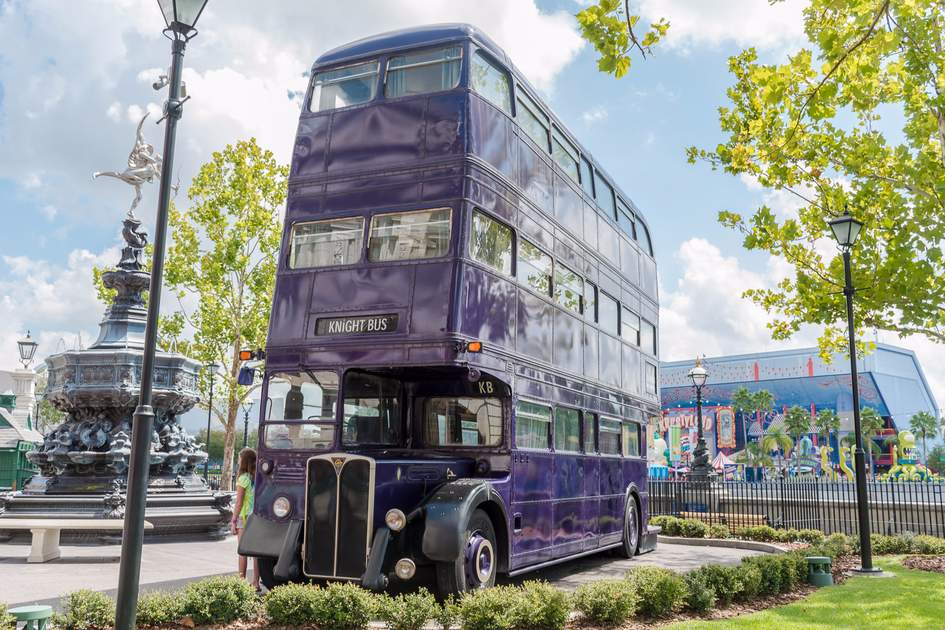 The United States and London both have a great selection of locations for you to visit, but if you are more adventurous there is a remarkable spot in Portugal too!

Harry Potter in the United States

Good news: The U.S. is loaded with Harry Potter fun.

1. Immerse yourself in The Wizarding World of Harry Potter

If you're a muggle who really loves witchcraft and wizardry, a visit to The Wizarding World of Harry Potter at Universal Studios will send you into overdrive. Both U.S. locations (Orlando and Hollywood) boast unreal replicas of Hogwarts and the village of Hogsmeade. Wander into the Hog's Head for a cool Butterbeer before popping into the famous Ollivander's for an enchanted wand of your own—the experience is so authentic, you'll feel like you came in through Platform 9 3/4. Universal also offers up some fantastic Potter-themed rides. (If you find yourself in Japan, the Wizarding World in Osaka even has its own Black Lake.) 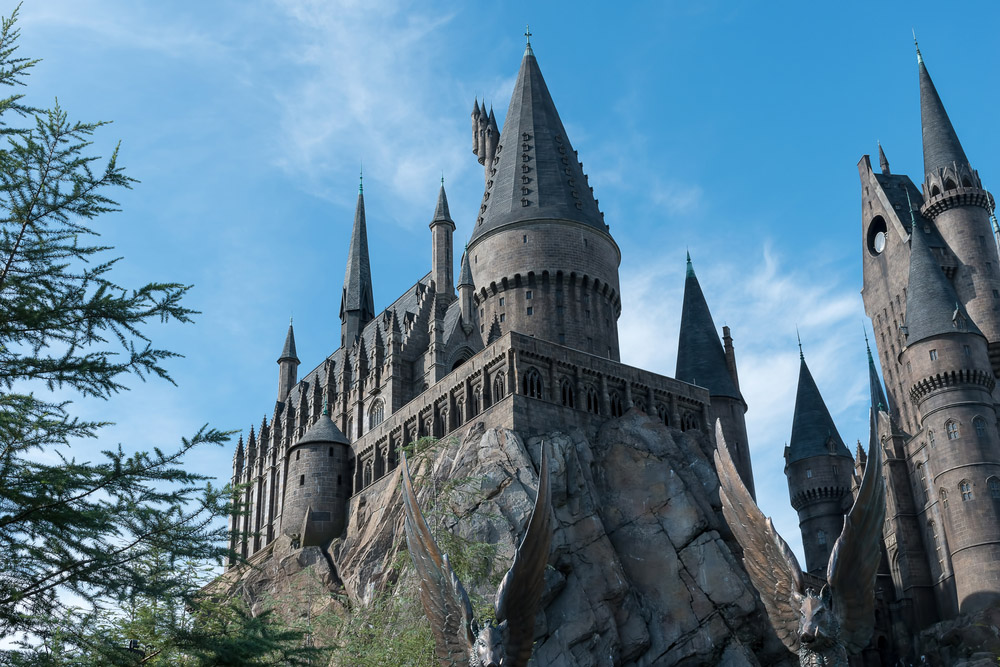 2. Become a wizard yourself

Visiting a Harry Potter exhibit is one thing; embodying a wizard is quite another. The U.S. is rich in LARP communities (live action role play), which take fantasy play-acting to a whole new level. A Harry Potter-style LARP is coming to Virginia this summer for a four-day mega-event of sorcery and witchcraft.  Poland also has a similar wizarding LARP of its own—both are full-scale, highly immersive experiences that turn fans into participants.

3. Celebrate all things Potter at LeakyCon

Those who find larping too extreme might feel more at home at LeakyCon, a hardcore fan experience that attracts thousands of attendees each year. The convention, which celebrates all things Harry Potter, touts wizardy panels, programs, discussions and more—including special guests like screenwriters and actors from the films. This year's LeakyCon will be held in Los Angeles this October. (Don't worry, mudbloods are welcome.)

4. Get your Quidditch on

Quidditch may have sprung from the imagination of J.K. Rowling, but the magical sport is all too real in the muggle world. South Carolina hosts an annual world cup every April that attracts roughly 80 teams from across the country. Highly competitive, the game is run through U.S. Quidditch, a nonprofit organization that hopes to expand the sport to all genders and age levels. If you want to catch sight of the golden snitch elsewhere, the International Quidditch Association also has a world cup of its own. This year's will be in Frankfurt, Germany in July. 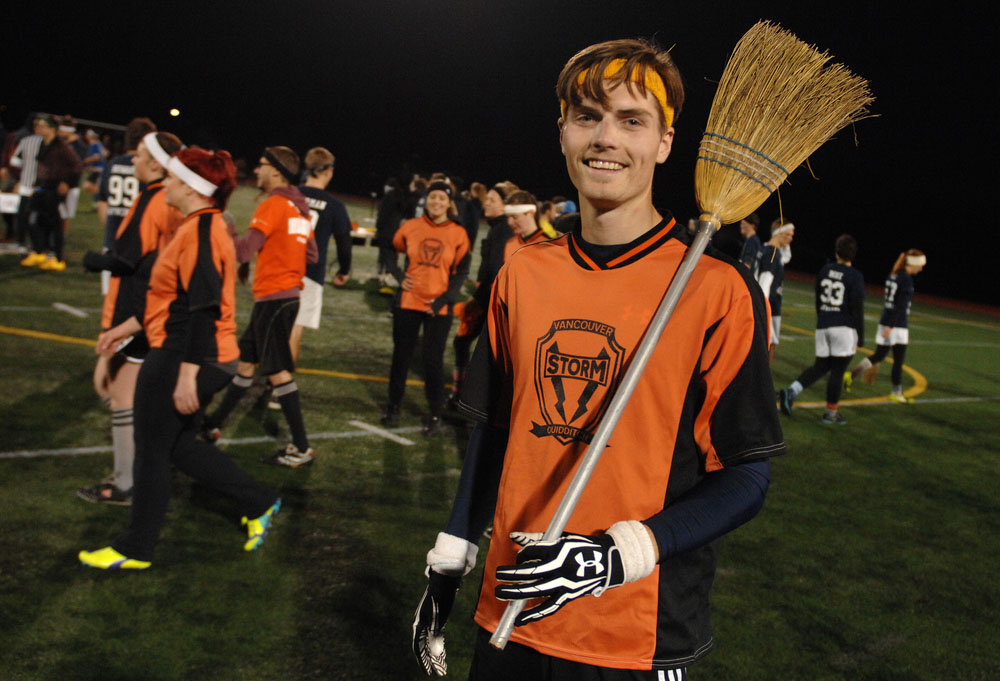 On the hunt for the best Harry Potter London tours? We've got you covered.

5. See the characters on stage with Harry Potter and the Cursed Child

Loyal Potter-heads are abuzz over this much-anticipated stage phenomenon. Making its debut in London's West End in July, the story will flash forward 19 years into the future—providing a glimpse into the adult life of "the boy who lived." The two-part play was spun off an original story by J.K. Rowling, which will be released this summer as the eighth official book in the Harry Potter series. Until then, fans can meet the characters (digitally, that is) while they wait for the curtain to lift.

6. Stroll past the Leaky Cauldron

In addition to being the most famed inn and pub in the wizarding world, the Leaky Cauldron is also the passageway to Diagon Alley. And while the books will tell you that it's located on Charing Cross Road, the exterior was actually shot at number seven, Stoney Street (though Rowling herself clarifies that the pub's true address is number one, Diagon Alley). If you find yourself in London, a stroll down Stoney Street will surely put you in a wizardy mood. 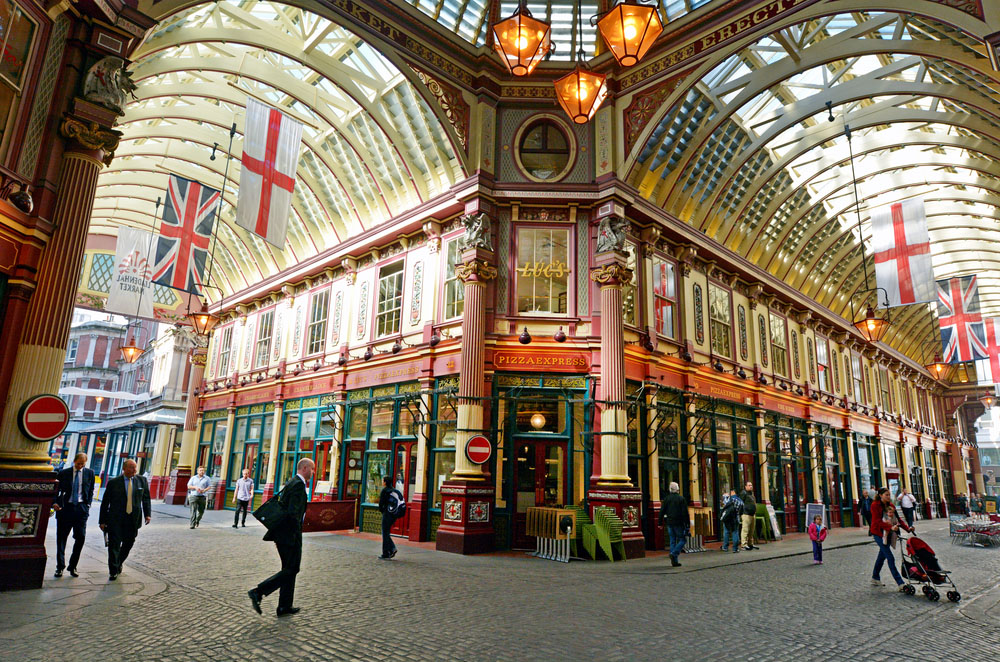 7. See the Hogwarts dining hall for yourself

While the Great Hall of Hogwarts may be a fictional gathering place for hungry wizarding students, the place that inspired it is quite real. The Hall of Christ Church at Oxford is stunningly reminiscent of the Hogwarts dining area, complete with ornate paintings, subdued lighting, and gloriously high ceilings. It's little wonder that the Harry Potter filmmakers built their own replica to use for the movies. Devoted fans will remember the Great Hall as the setting for the all-important Sorting Ceremony—the ritual that reveals which school house each first-year student will be assigned to. 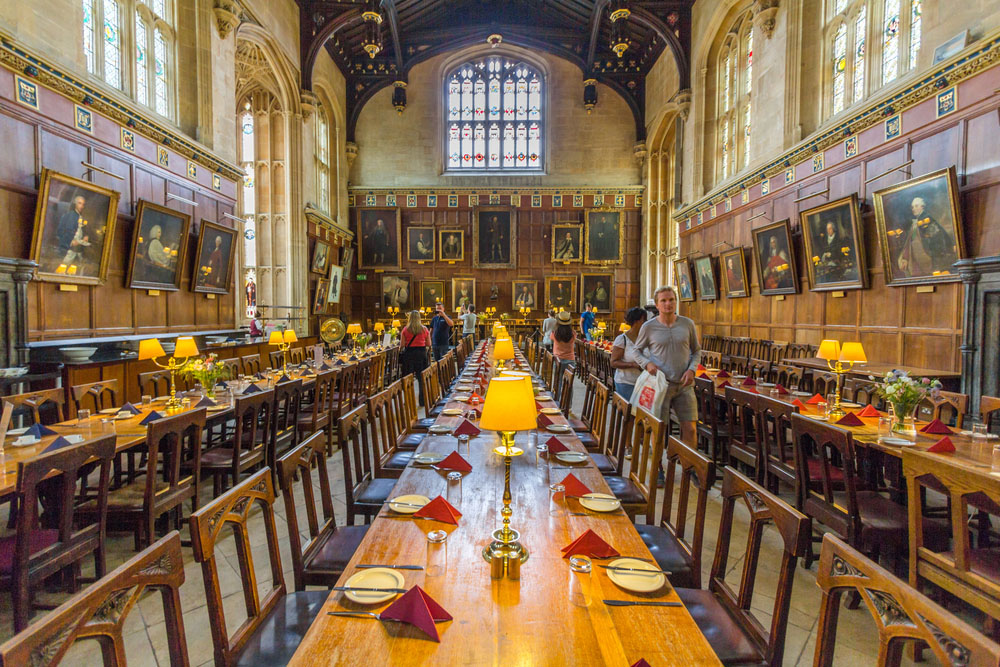 Where Harry Potter vacation ideas are concerned, it doesn't get much more authentic than a behind-the-scenes studio tour. Warner Bros. offers a fabulously in-depth "Making of Harry Potter" experience that should be at the top of any Potter-lover's to do list. Visit number four, Privet Drive and sneak a peek into the Dursleys' living room. From there, check out original sets, costumes and props used in the films (but not before sampling a Butterbeer or trying out some wands, of course.)

Some die-hard fans might prefer to get out of the studio and onto the streets. It's hard to go wrong with some Harry Potter London tours. This is ideal for travelers who want to feel the magic of Hogwarts without having to organize the details. Muggle Tours kick off near London Bridge and hit all the high points—from the visitors' entrance of the Ministry of Magic to hidden Harry Potter locales tucked away throughout the city. Meanwhile, bus tours can take you to King's Cross station and the exterior of Gringotts Bank.

10. Visit the locales behind Hogwarts

We can't very well talk about Harry Potter vacations without bringing Hogwarts into the mix. The famous School of Witchcraft and Wizardry may be a fictional one, but parts of the movies were indeed filmed in real places. It was at Alnwick Castle that Harry and company took off on their first-ever flying lesson. The ancient cloisters of Durham Cathedral also provided much of the backdrop for the movies, including some of Harry's classrooms. If it's Professor Snape's classroom you're after, you'll have to head to Lacock Abbey in Wiltshire. 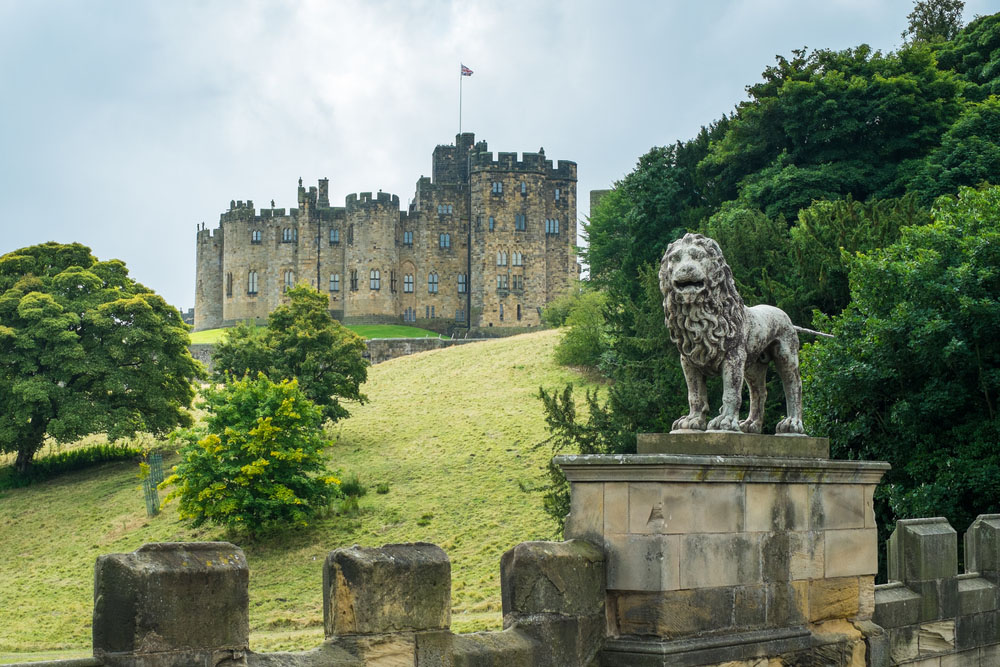 11. Check out the real Diagon Alley

According to Harry Potter lore, the Leaky Cauldron serves as an entryway into Diagon Alley. The famous street was actually inspired by the very real Leadenhall Market in London. For the students of Hogwarts, Diagon Alley is a wizarding shopping haven; the home of such retailers as Flourish and Blotts bookstore and Eeylops Owl Emporium. While the real-life Leadenhall Market is geared more toward muggles, it's still worth a visit. Its bustling streets are part of what inspired Diagon Alley.

12. Wander through the Forbidden Forest

The Forbidden Forest was off limits to Hogwarts students (unless they were sentenced to detention), but the rule doesn't apply in the muggle world. The real forest, located in Black Park in Iver, isn't nearly as foreboding or ominous. In the books, the Dark Woods are home to creatures like three-headed dogs and unicorns, with lovable Hagrid's cabin resting just on the outskirts. In reality, Black Park is a family-friendly escape full of woodland and raw, natural beauty.

13. Stay in a Potter-themed hotel

To really get into the spirit, Potter-heads don't have to call it quits come nightfall. London's Georgian House Hotel feels more like the private dorms of Hogwarts than a hotel, offering over-the-top Harry Potter-themed accommodations. The "Wizarding Chambers," as they're called, bring the sorcery to life with four-poster beds, mysterious potion bottles, and spooky cauldrons all around. If you didn't know any better, you'd think you were in the Gryffindor House. Let's just say this is the closest any muggle is going to get.

Every Harry Potter fan knows that few landmarks are as significant as King's Cross station. It's here that the magical 9 3/4 platform materializes, whisking Harry and his friends off to the magic that awaits them at Hogwarts. J.K. Rowling's kid wizards get there by running into the brick wall in between platforms 9 and 10, where they seemingly disappear. Today's visitors will get a kick out of the real luggage trolley sticking out from the wall, a throwback to Harry's first trip to Hogwarts.

Miraphora Mina and Eduardo Lima are the brilliant graphic designers behind the Harry Potter films. The iconic "Wanted" posters, every front page of The Daily Prophet, the infamous Marauder's Map—the pair brought them all to life on the big screen. The "House of MinaLima" exhibition, open until early 2017 at 26 Greek Street, celebrates the iconic graphic designs of the Harry Potter movies. The collection is all at once whimsical and otherworldly; definitely a worthy contribution to the Potterverse. 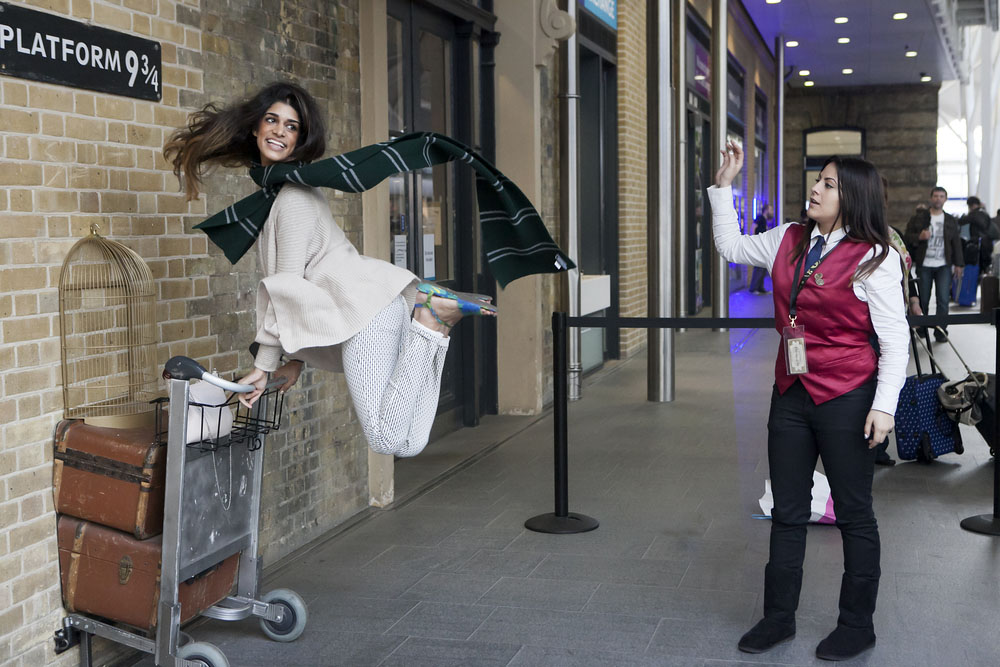 If some Harry Potter Brussels tours are on your list, we won't steer you wrong.

16. Get lost in Harry Potter: The Exhibition

London isn't the only place celebrating all things Harry Potter. The uber-hyped eponymous exhibition will debut in Brussels on June 30. The event is geared toward artistry, spotlighting some of the films' most iconic costumes and props. But the real draw here is in the presentation; all these Harry Potter goodies will be on display in intricate sets that mirror locales like the Great Hall, Hagrid's hut, and even the Gryffindor common room. Since debuting in 2009, the wildly popular exhibition has been everywhere from Chicago to New York City to Singapore. Soon it'll top the list of Harry Potter Brussels tours.

Portugal has a special Harry Potter connection you probably don't know about.

This absolutely stunning landmark has long been a popular tourist attraction in Portugal, especially for Harry Potter fans. The elaborately designed library was frequented by J.K. Rowling herself back when she taught English in Porto during the early '90s. In fact, many say that its interior is strikingly similar to Hogwarts; most notably the staircase. Whether Lello's (referred to by many as the most beautiful bookstore in the world) actually inspired the Harry Potter adventures or not remains a mystery, but that doesn't make a visit there any less enchanting. There's even a rumor going around that it was the inspiration behind Flourish and Blotts—the famous bookstore in Diagon Alley. 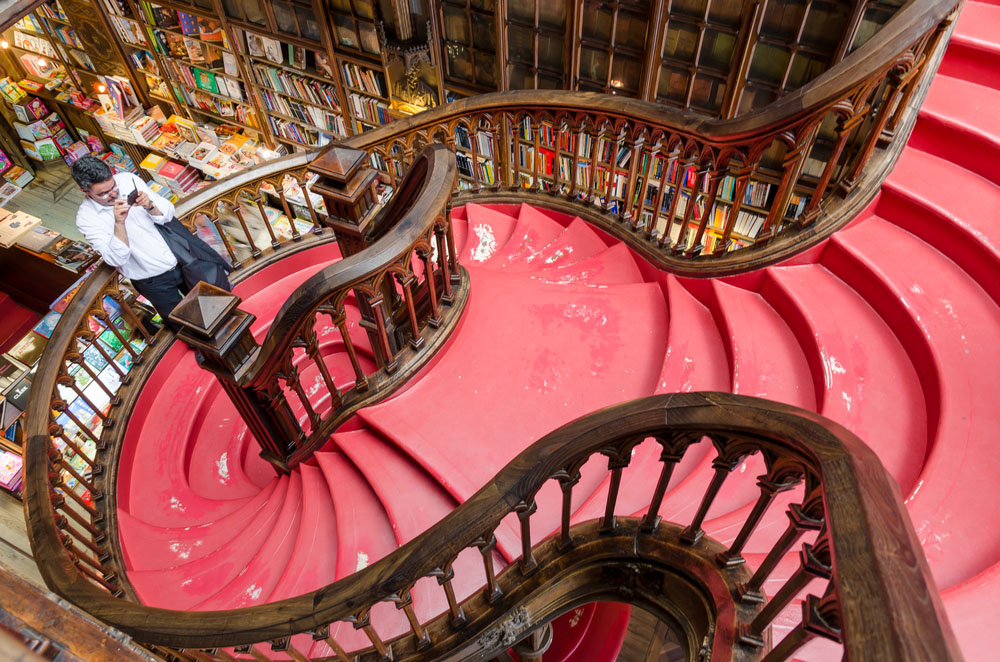 A visitor snaps a photo of the staircase at the Lello & Irmao bookstore, Portugal. Photo: Shutterstock

Ready to book a family trip to a Harry Potter-inspired destination?

Insight Guides can help you plan and book amazing family trips around the world. Simply get in touch to share your ideas for the trip and to let us know exactly when you would like to travel. Our local experts will then create a personalised itinerary based on your specific requirements, which you can amend until you're completely happy with every detail before booking.