Blues, barbecues, and booze: here's how to spend 48 hours in the Southern gem of Memphis. 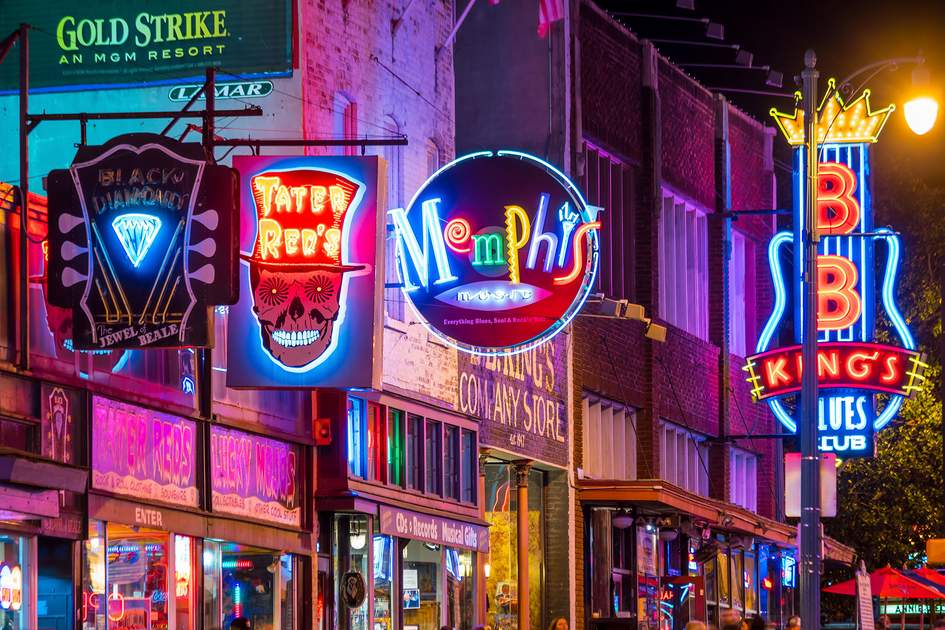 When most people think of the musical city of Memphis, they think of blues, barbecues, and booze. The city’s rich culture and dark political history combine with raucous nightlife to make this an intoxicating place to visit in the Deep South.

Memphis has a chequered past, having changed hands numerous times over the course of its history, and having survived a yellow-fever epidemic, the American Civil War, and the Great Depression. It also played a key role in the Civil Rights Movement and was the location for the tragic and shocking assassination of Dr Martin Luther King Jr in 1968.

Memphis is also a true mecca for music lovers from around the globe – it’s the birthplace of the blues and the original hometown of rock. Visitors should expect warm, Southern hospitality with a touch a grit – Memphis can get a little dicey after dark, so stick to the well-trodden path here. Try and book a hotel downtown if possible: the Westin Memphis, Hotel Napoleon and the Peabody are all good options and are within walking distance of the city’s popular downtown attractions and sights.

There’s plenty of things to do in Memphis to keep you entertained, from the crooning blues of Beale Street to immersive museums, music hotspot Sun Studio, and the musical pilgrimage of Graceland. Read on for our guide to a weekend in Memphis and discover a thrilling rock 'n' roll legacy that lives on to this day. 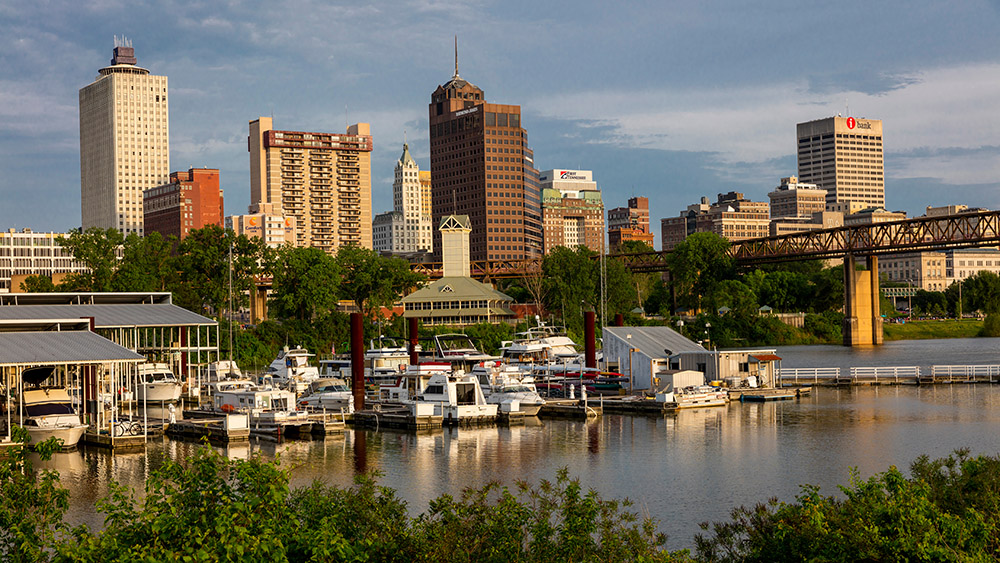 Begin your Memphis downtown exploration with a trip to Beale Street, among the most legendary in America. Beale experienced its share of highs and lows over the years before making a glorious comeback in the ‘90s as a top tourist destination and entertainment district. Bars and clubs offer live music and Southern eats seven days a week, while there’s also a range of shops, galleries, coffee shops, and restaurants to explore.

Whilst the street is primarily known for its nightlife, there’s plenty of places to check out during the daylight hours, too. Start by learning about the greatest rockers, rappers, and blues singers at the Memphis Music Hall of Fame, before admiring the glorious facade of the old Daisy Theatre. Photograph the live-in goats at Silky O'Sullivan's and make sure to order a retro sundae at the A. Schwab Old-Fashioned soda counter located inside the oldest store in Memphis.

If you are short of time in the city, book a hop-on, hop-off bus tour to see some of the main landmarks and attractions in Memphis. Stops include Beale Street, the Blues Hall of Fame, Graceland, and the National Civil Rights Museum. It’s a convenient and affordable way of packing in lots of city sightseeing. 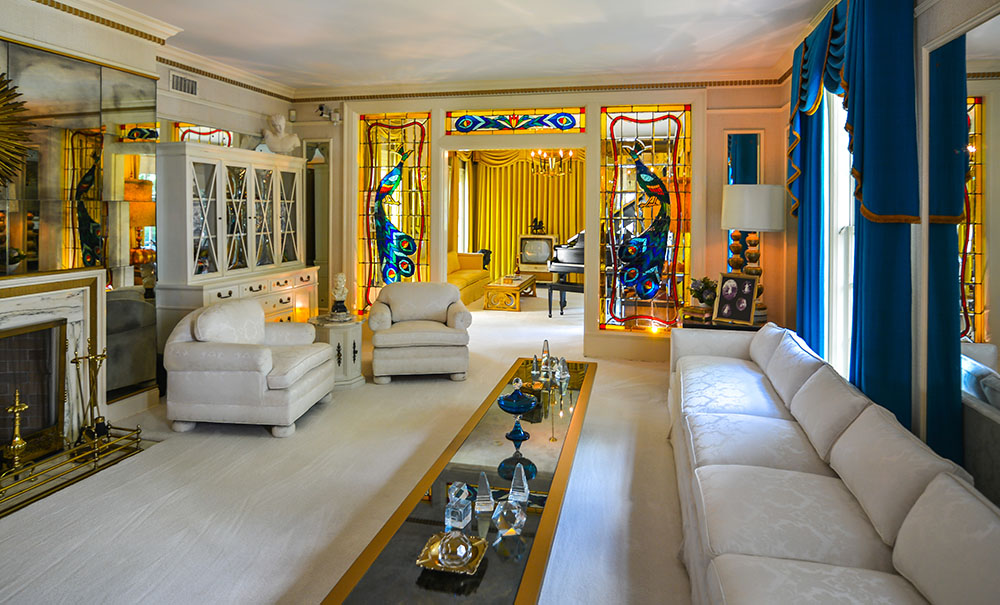 Start your exploration of the history of the Civil Rights Movement in Memphis at the site of Dr Martin Luther King Jr's 1968 assassination. The National Civil Rights Museum at the Lorraine Motel takes visitors on a journey to understanding the event that sent shockwaves around the world. It's a brilliantly emotive and immersive experience, with first-hand accounts from those who were integral to the movement. Wander around a range of multi-sensory and multi-media displays and important historical artefacts to learn more about the impact that the movement and Martin Luther King had on the world. Visiting this important museum will help you understand Memphis in its proper, historical context. 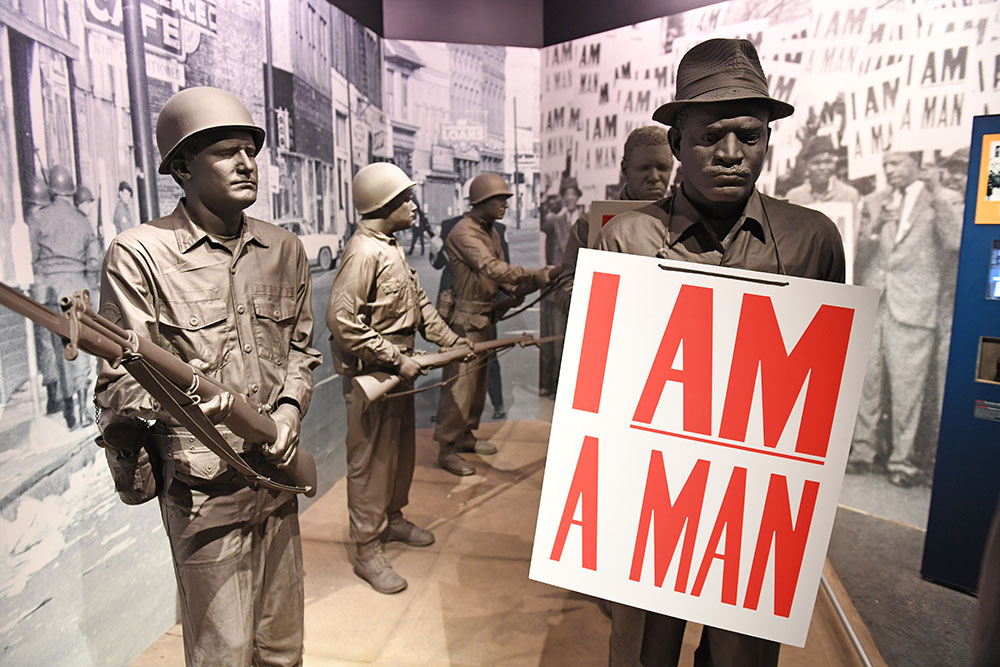 One of the most delightfully kitsch things to do in Memphis is to watch the world-famous duck parade. That's right, an actual duck parade. The pampered Peabody ducks spend their days swimming in the marble fountain in the hotel lobby, much to the amusement of hotel guests. Then, at 5pm sharp, they are led across the lobby and upstairs to the Duck Palace on the roof by the regally dressed Duckmaster, with all the pomp and ceremony that a duck parade demands. Whilst the kids can bag front-row seats, adults can get stuck into happy hour in the Lobby Bar.

Make sure to grab dinner at the iconic B.B. King's on Beale. Feast on Southern classics like Memphis-style ribs, fried catfish and pulled pork as you enjoy classic soul and moody blues on the mainstage.

For after-hours entertainment, Beale Street is pretty much ground zero when it comes to nightlife in Memphis. Party until dawn in neon-lit boozers and slamming music venues. Beale may have birthed the blues, but today you can experience a range of musical offerings including duelling pianos, reggae, rock, and fusion jazz. 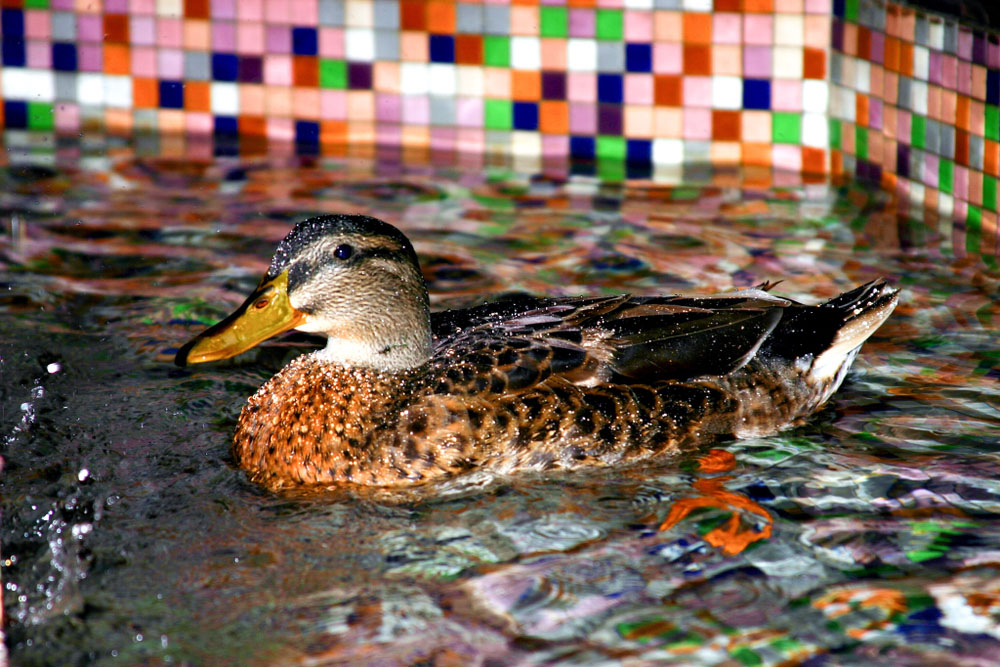 Head to Stax Museum of American Soul Music, the original site of famous Stax Records Studio and discover the history of soul music in Memphis. Here you’ll find an impressive collection of musical artefacts, exhibits, and interactive elements all dedicated to soul music. Learn the story of how this small studio start-up grew to become a multi-million-dollar organization that churned out mega hits from stars such as Albert King, Otis Redding, and Isaac Hayes. It's a fascinating insight into the legacy of soul music.

Continue your music education at the equally important Sun Studios. This rock and roll studio opened in 1950 and signed a plethora of talented artists like Johnny Cash, Elvis Presley, and Carl Perkins who went on to enjoy extraordinary fame. The museum was expertly created and curated by the Smithsonian Institution and aims to preserve and promote musical giants who overcame a raft of racial and socioeconomic barriers to create outstanding music that is still loved today. 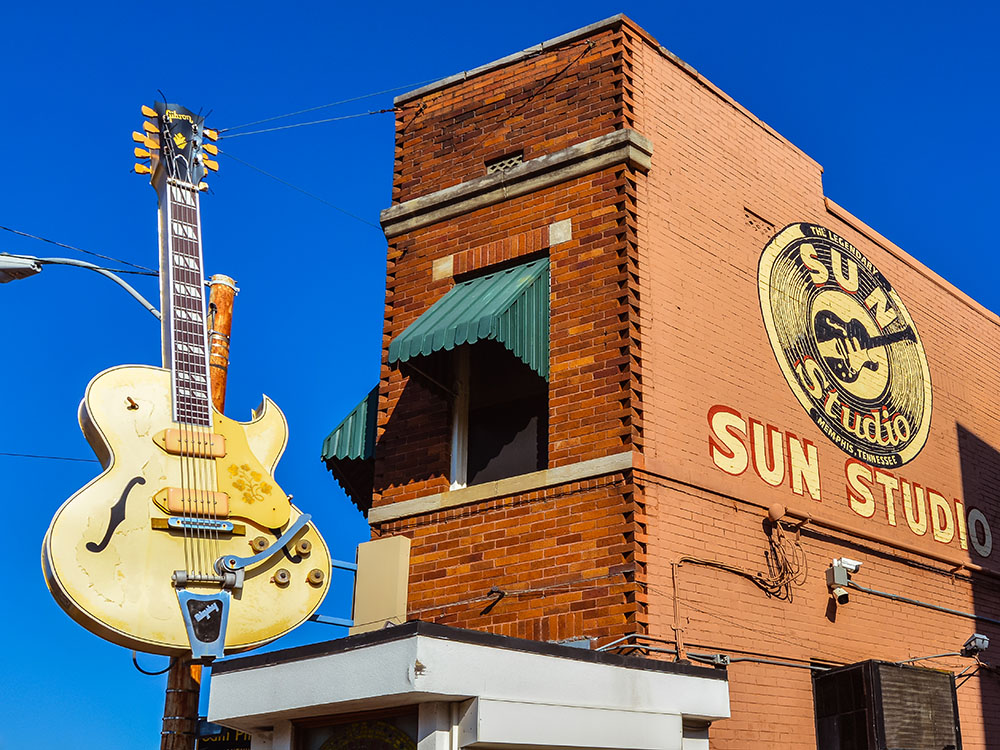 Cycling around Memphis on two wheels will allow you to cover a lot of ground in the city. Either hire a bike or book onto a guided bike tour to see some of the most-popular highlights. For a scenic cycle, bike over to the 'Big Muddy' – as the Mississippi is known. Check out local favorite Mud Island, where city dwellers go for recreation and river runs.

For sweeping views of the river and the downtown skyline, cycle over Big River Crossing. It's the longest public pedestrian bridge across the Mississippi River and connects downtown Memphis to Arkansas. Next, head on over to Main Street in the downtown area for a slice of quintessential Memphis. Grab a coffee and a bagel from Bluff City coffee shop and ride the vintage trolley like a total tourist.

Love photography? Make sure to check out the Instagram-worthy murals and striking sculptures in the area. They are sure to brighten up your Insta grid! 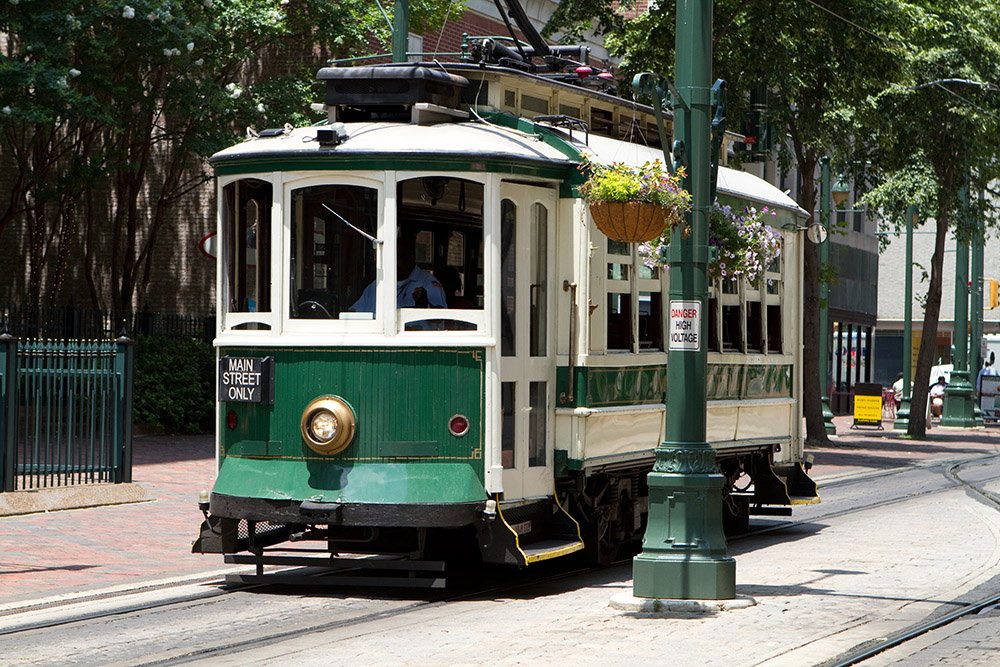 You simply must sample classic soul food at the hugely popular Central BBQ in downtown Memphis. They are an institution in the city and serve up slow-smoked beef brisket and the tastiest ribs around.

After a filling BBQ meal, why not discover the city’s spooky side. One does not come to Memphis and not partake in a ghost tour of the city. Embrace the paranormal and go on a guided tour to learn more about the dark history of Memphis, as well as spooky ghost stories and tales of haunted happenings. Be captivated by eerie tales as your local guide takes you to some of the more notorious and haunted spots in the city. Common stops include John Alexander Austin House, the Orpheum Theater and notorious Ernestine & Hazel's, all said to be plagued by a variety of spectres and ghouls.