Tunisia has dealt well with coronavirus, reopening its borders on 27 June. Here are 7 top attractions in Tunisia. 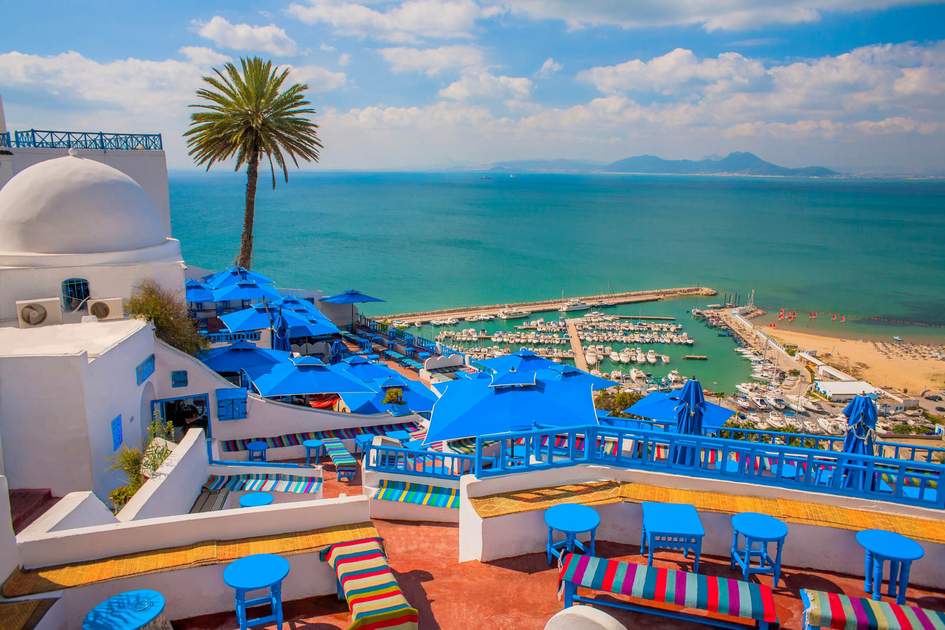 The North African country of Tunisia has weathered the Covid-19 pandemic with considerable success. The authorities closed borders and initiated confinement measures, with the result that the country has recorded just 1,168 cases of the coronavirus and suffered 50 deaths. From 27 June, Tunisia reopened its borders and has been placed on the EU’s list of ‘safe’ countries. In celebration of the country’s welcoming visitors back, we’re taking a look at 7 of its top attractions.

Perhaps the jewel in Tunisia’s crown, the Roman amphitheatre of El Djem is every bit as impressive as similar sites found across southern Europe, but receives just a fraction of the visitors – even before the coronavirus pandemic, it was possible to have the whole place to yourself on a quiet day. Built in the 3rd century AD, the amphitheatre could seat up to 35,000 spectators, who would flock here to watch gladiatorial matches and public executions.

El Djem is still occasionally used for entertainment purposes, though nowadays bookings tend to be musical concerts rather than blood sports. Even if there are no performances on, though, a visit to this magnificent amphitheatre is likely to prove a highlight of any trip to Tunisia. Take a position in the best seats and imagine yourself a well-to-do spectator of a gladiatorial combat, then explore the passageways and subterranean tunnels to get a sensation of life as a participant in these dangerous games. 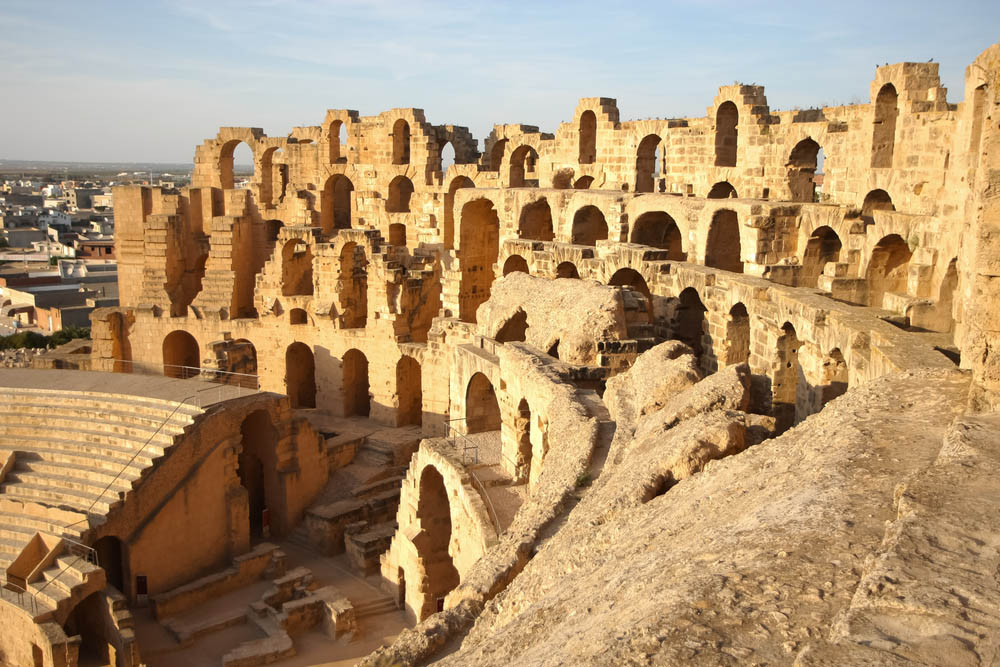 A short hop from Tunis, the capital city, you’ll find Sidi Bou Said, a beautiful small town perched on the clifftop above the Mediterranean coast. All the buildings here are painted white and blue, which sparkles in the ever-present sunlight, and there are fabulous views across town from the rooftop terrace of the Dar el-Annabi, a fascinating family home now converted into a museum. Wander the attractive streets and harborside, and make sure to stop for a maqloub – a flatbread filled with lamb, salad and yoghurt, seasoned with harissa – at one of the many small cafés. Le Chargui is our favorite, but there are plenty of worthy candidates!

History and archaeology buffs will also enjoy a trip here – on the outskirts of Sidi Bou Said are the extensive ruins of Carthage, the Phoenician city-state that challenged the power of the Roman Empire, most famously when Hannibal led his army and a troop of war elephants through the Alps to attack Rome from the north. It’s well worth spending a morning exploring the haunting remains of this once proud city. 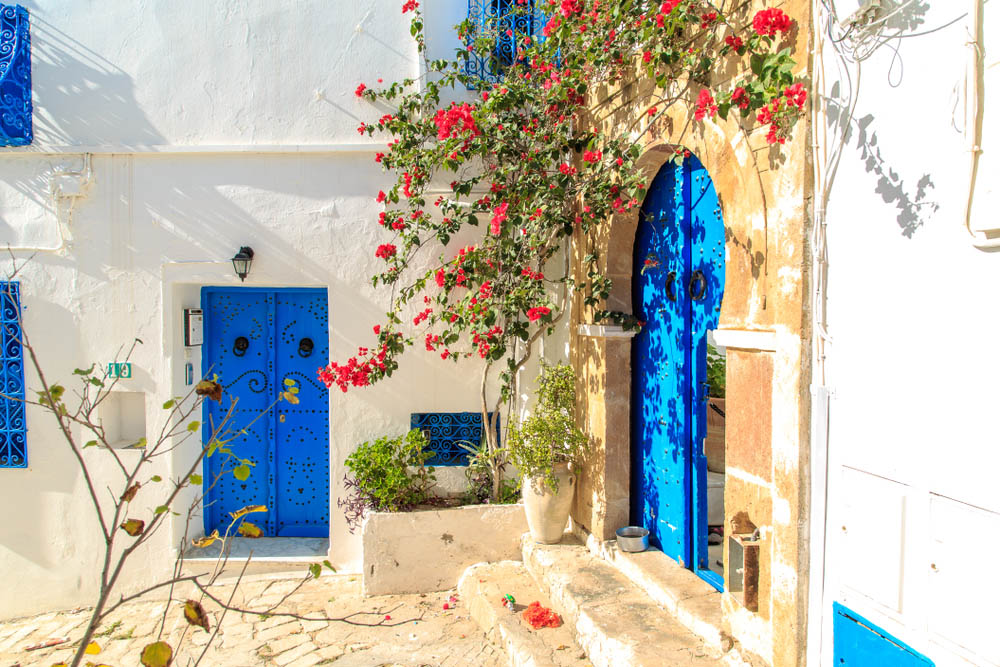 3. Down in the desert

Far away from the fertile Mediterranean coast, Tunisia’s south is characterized by the Sahara Desert. As you’d expect, much of this area is a sandy nothingness, but for those willing to make the trip into the desert, there are plenty of rewards to be found. Perhaps most obviously, the Sahara is the quintessential place to take a camel ride – try signing up for a safari in the town of Douz, or better yet, further south towards Ksar Ghilane.

Those seeking fascinating and unique architecture need look no further than the Berber villages of Matmata and Chenini, which feature troglodyte-like dwellings dug into the rock. A particularly fine example is the ksar (stronghold) at the small outpost of Ouled Soltane. If you arrive and have a strange sense of having seen this place before, you’re probably thinking of Star Wars: scenes from The Phantom Menace were filmed here, and the whole area was used extensively in the original 1977 outing A New Hope. Several of the film sets are still in existence and accept tourists, and the region is even called Tataouine… 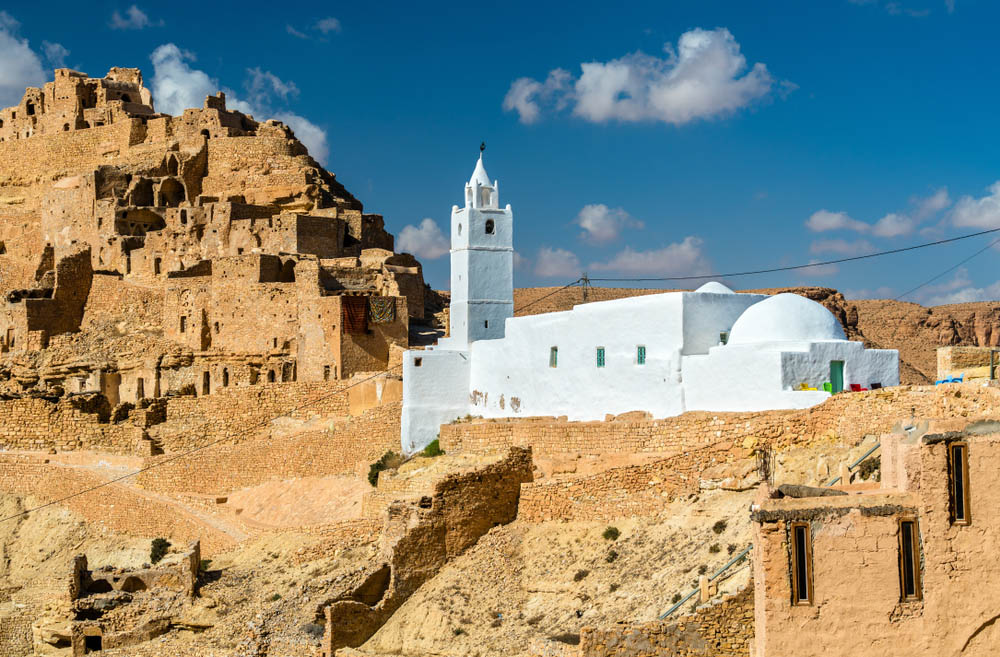 A little further north, the desert town of Tozeur is a pleasant and welcoming oasis, which rewards a couple of days’ exploration with a number of quirky local sights. Start with a wander around the old quarter to admire the beautifully intricate brickwork, and shop for carpets and other traditional souvenirs in the hassle-free stores. Tozeur is also an excellent place to try traditional Berber cuisine – the stews baked in clay pots at Restaurant Dar Deda are delicious!

Just outside town, you’ll find the enormous Chott el-Jerid, an otherworldly salt lake that glistens in the sunlight and may be one of the oddest landscapes you’ll ever see. For something a little less alien, try Tozeur’s palmeraie – a huge plantation of palm trees with a surprisingly interesting museum about the trees’ history, folklore, and biology. And finally, you’ll probably never have seen a place quite like Chak Wak, an ‘educational’ park which takes the visitor on an excitingly diverse tour of enormous and slightly silly models of dinosaurs, Noah’s Ark and the parting of the Red Sea, among plenty more. 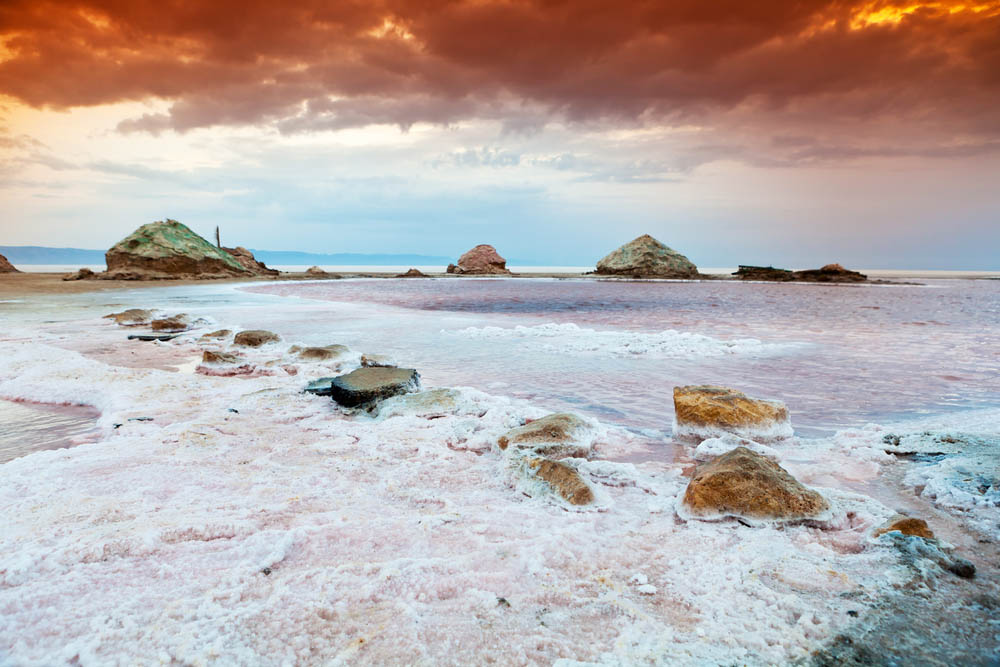 Yes, we’ve already talked about El Djem, but the Roman legacy in Tunisia amounts to much more than the amphitheatre. Following Rome’s defeat of Carthage in 146 BC, the Empire annexed Tunisia into its Africa Province and established many towns, some entirely new and others on the ruins of Carthaginian settlements. The remains of plenty of these towns still exist, and exploring their ruins is one of the highlights of a visit to Tunisia.

Bulla Regia, in the north, is one of the most unusual Roman sites in the world – owing to very high local temperatures, here the villas were constructed underground with open-air courtyards, which created a pleasingly cool ambience even in the heat of summer. The site is now home to some of the best preserved Roman dwellings anywhere, many of them bedecked with outstanding mosaic floors. It’s an excellent opportunity to get a real feel for what a Roman home was like.

Elsewhere in the country, Thuburbo Majus, Dougga and Sbeitla are all stunning Roman sites; it’s easy to make an argument in favor of any of these, but for our money Sbeitla is the best. Set in fields of long grass, the ruins – usually deserted except for a few friendly locals – comprise a fantastic triumphal arch, a small theatre, marvelous in-situ mosaics, and a trio of magnificent temples; all in all, it has everything you’d want from a Roman town. 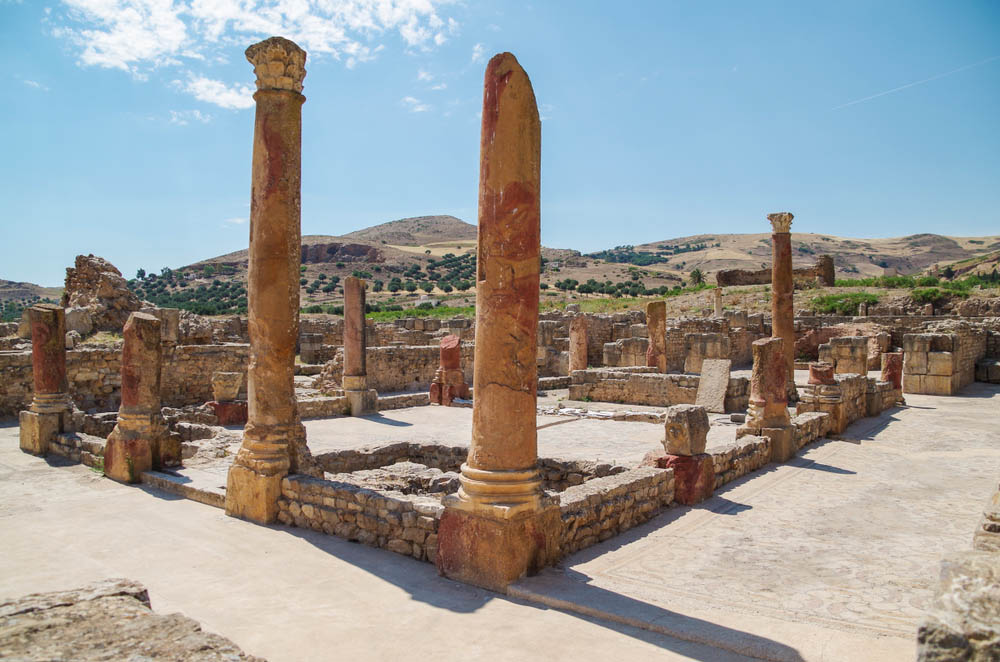 6. The Great Mosque of Kairouan

There are a number of contenders for Islam’s fourth holiest site, and one of them is here in Tunisia, in the central town of Kairouan. The Great Mosque – built in the 9th century – is the oldest mosque in North Africa, and it’s a large but elegant building. Non-Muslims are not allowed beyond the central marble-paved courtyard, but this is well worth a visit to see the hundreds of graceful arches along the colonnades on all sides, as well as to experience the peaceful and meditative atmosphere.

Kairouan is also home to a labyrinthine medina in which it’s a pleasure to wander and lose yourself for a morning – especially if you find your way to the Maison du Gouverneur, once a palace and now one of the most extraordinary carpet shops you’ll ever see. Every wall and floor – and even ceiling – in the enormous building is covered in beautiful carpets of all colors, sizes and shapes. Over mint tea, you’ll be shown rug after rug – and though there’s no obligation to buy, it’s hard to resist! 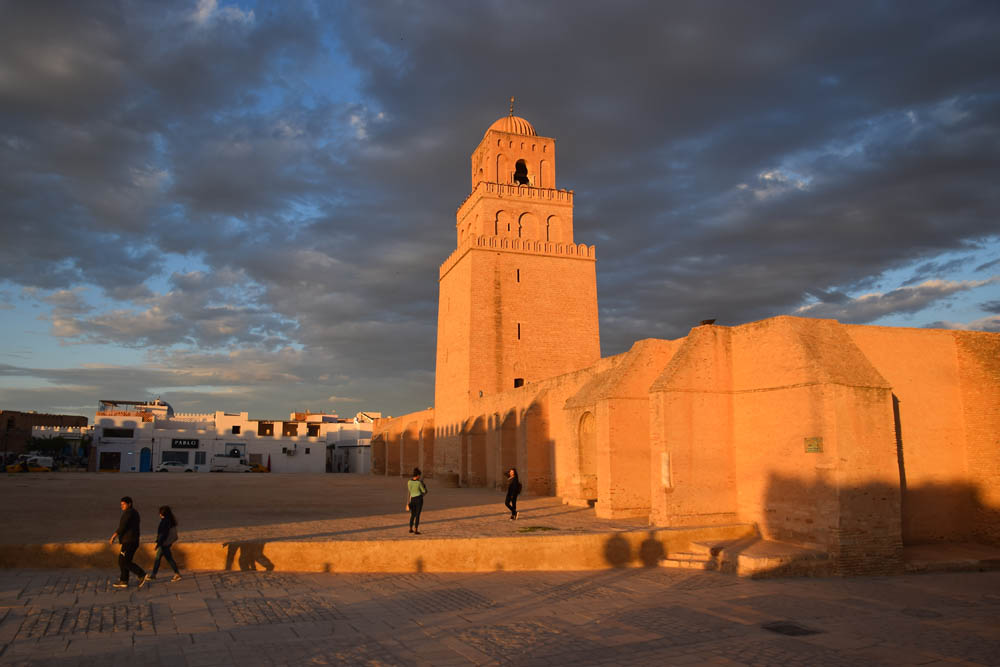 History, deserts and mosques can all be rather dry in their own ways – so after all that, you might want a splash in the sea! Fortunately, Tunisia is home to many outstanding beaches, which make great places to unwind after exploring the culture of this fantastic destination. Hammamet is perhaps the most well-known, and there’s a good reason for its fame: it’s a beautiful – if sometimes busy – expanse of perfect white sand and shining blue sea, with plenty of beachside cafés, restaurants and facilities.

If you’re looking for somewhere a little further off the beaten track, you could try La Grotte on the northern coast – it’s a lovely beach surrounded by towering white cliffs, popular with locals but seemingly little discovered by tourists. If even that sounds too crowded, you could always try the white sands and shallow seas of the Kerkennah Islands, which lie 25km (15.5 miles) off the east coast and offer lovely secluded beaches rarely visited by the outside world. 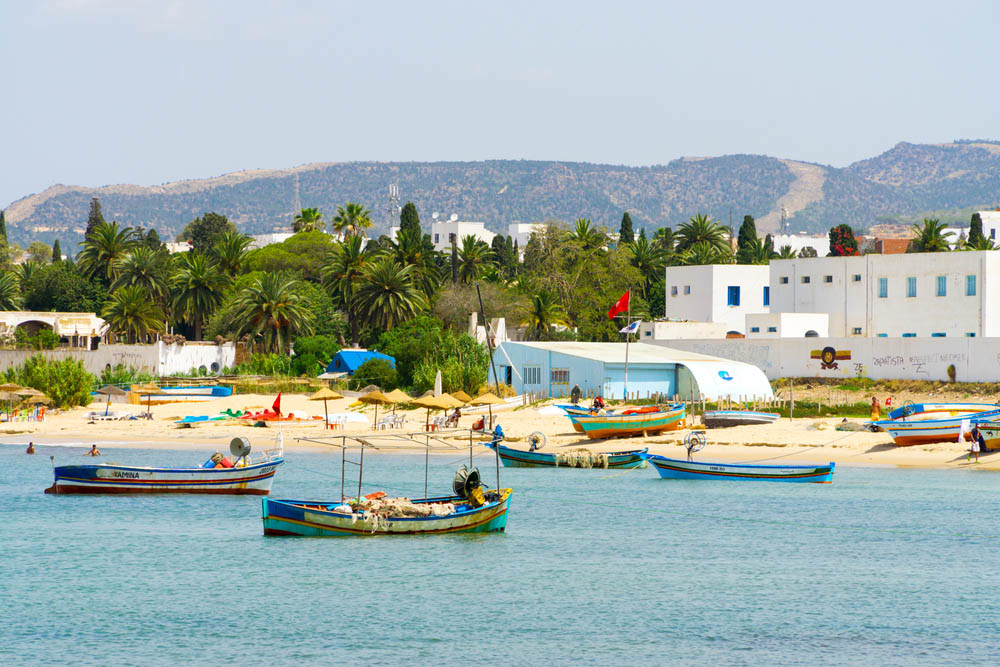 View of the beach and the sea at Hammamet. Photo: Thomas Klee/Shutterstock