A guide to Japan, host of the Rugby World Cup 2019

2019 is a big year for Japan. With the Rugby World Cup coming to town, a trip to this stunning country is a once-in-a-lifetime opportunity for many rugby fans. Insight Guides tells you what to expect. 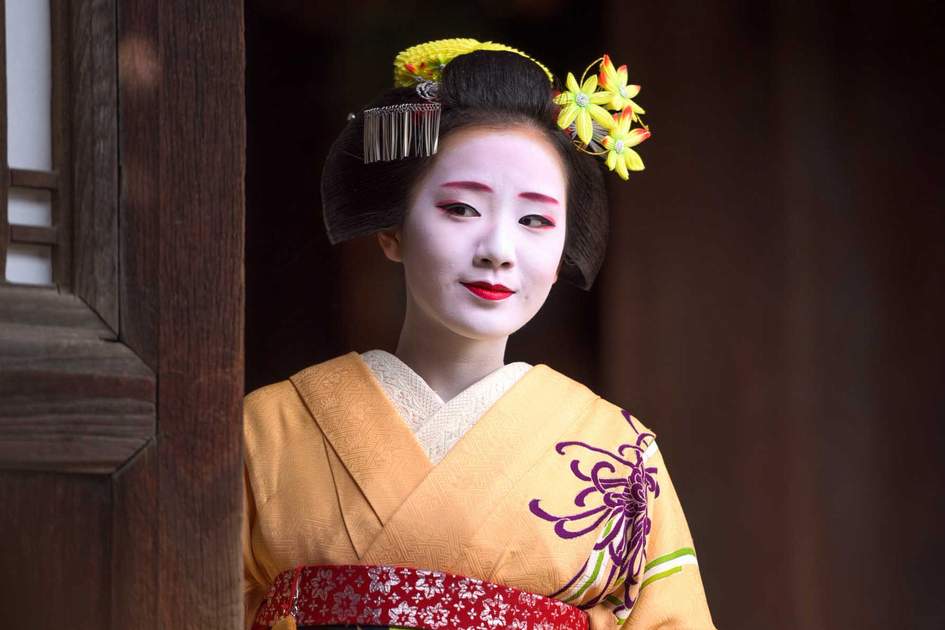 The 2019 Rugby World Cup is heading to Japan, making it the first time in history that the tournament will be held in Asia. Matches are scheduled to run between 20 September and 2 November, with Mitsubishi Estate Co. Ltd as the official sponsor. Tickets will go on general release in September 2018, but the Japanese Tourist Board has set up a website for the World Cup where you can register interest. But with flights and accommodation likely to be snapped up early and with a hefty price tag, you can never start planning too early.

Matches will be held in venues all around Japan. Here’s a guide to each location, and what they offer besides their obvious draw in 2019 – rugby.

Sapporo, located on the northern island of Hokkaido, is the island’s capital and its largest city, with 1.9 million people. Hokkaido is to many Japanese what Alaska is to Americans: the northern extremity with a romantic sense of frontier, where summers are short and winters exceedingly cold, and where the people are just a little bit different for living there in the first place.

Sapporo is an immensely liveable city, especially by Japanese standards. Streets are laid out in a grid, making navigation easy and useful addresses a reality, and they are also wider than most in Japan. The city is anchored by Odori-koen (Odori Park), running east to west through the centre. In summer, beer gardens spring up on the grassy areas and people linger outdoors long into the night. Take in a sweeping view from the observation deck on the 38th floor of the Sapporo JR Tower.

Iwate Prefecture, where Kamaishi City is located, sits in the Tohoku region. It is here that rugged mountains, sometimes incomprehensible dialects, innumerable hot springs and harsh winters make it seem a world away from Japan’s urban majority. Iwate-san (Mt. Iwate), at 2,040 metres (6,700ft), is considered the Fuki-san of the north, with its bubbling mud pools, steam geysers and scenic splendour.

The city itself is the heart of Japan’s steelmaking industry and has a close association with rugby, being home to the Kamaishi Seawaves team. It’s location, backed by mountains and fringing the Pacific Ocean, is delightful – take in its full glory by hiking up to the Daikannon Statue, which has been watching over the bay and its seafarers since the 1970s.

Kamaishi was one of the cities badly affected by the March 2011 earthquake and tsunami, when a magnitude 9.0 earthquake, the fifth-largest recorded in world history, struck 72km (44 miles) east of Sendai in the northwestern Pacific Ocean. The earthquake shook Tohoku for six minutes; the tsunami that followed swept away houses and caused massive loss of life. By 2017, 19,575 deaths had been confirmed in Tohoku, 6,230 people had been injured and 2,577 were still recorded as missing. Hosting games during the Rugby World Cup in 2019 will give the city a new legacy. 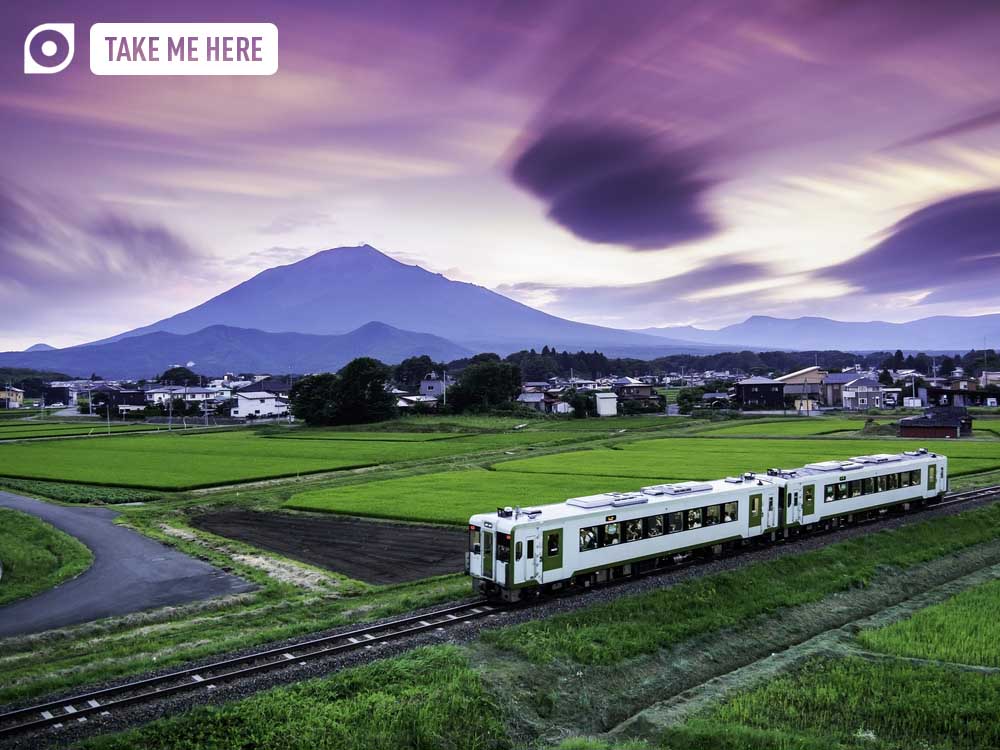 Just half an hour from Tokyo, Kumagaya is a regional hub with nearly 200,000 inhabitants. Two rivers define its geography: the Arakawa and the Tone River. The city grew rich through its silk and cement industries during the Meiji Period, but sadly most of the city centre was destroyed as a result of Allied bombings during World War Two.

Today, there is little of note to recommend this city, but a visit to Menuma Shodenzan Kangin Temple is highly recommended. Luckily, the World Cup isn’t held in the summer – when Kumagaya is one of the hottest cities in Japan.

Tokyo – the Japanese capital – is the city from which the world’s oldest imperial line rules from a hidden palace over one of the planet’s proudest peoples. Yet it’s also the place that gave us Sony and anime, Hello Kitty and bullet trains, and a city that’s continuously reinventing itself after being destroyed twice in the 20th century.

From the sushi vendors of Tsukiji fish market to the maids at Akihabar’s otaku (‘fanboy’) cafés, from the chic boutiques of Shibuya to the scruffy bars of Shinjuku, this giant 13+ million-strong-city in a sprawling megalopolis is opening its arms ever-wider to overseas visitors.

It is something of a cliché to describe the city through its contrasts, or to mention how traditional elements of a city sit beside modern. But in Tokyo’s case, that’s really what does define the city. Walk 10 minutes from the Imperial Palace, for example, and you’ll be surrounded by high-end European fashion houses and expensive department stores. 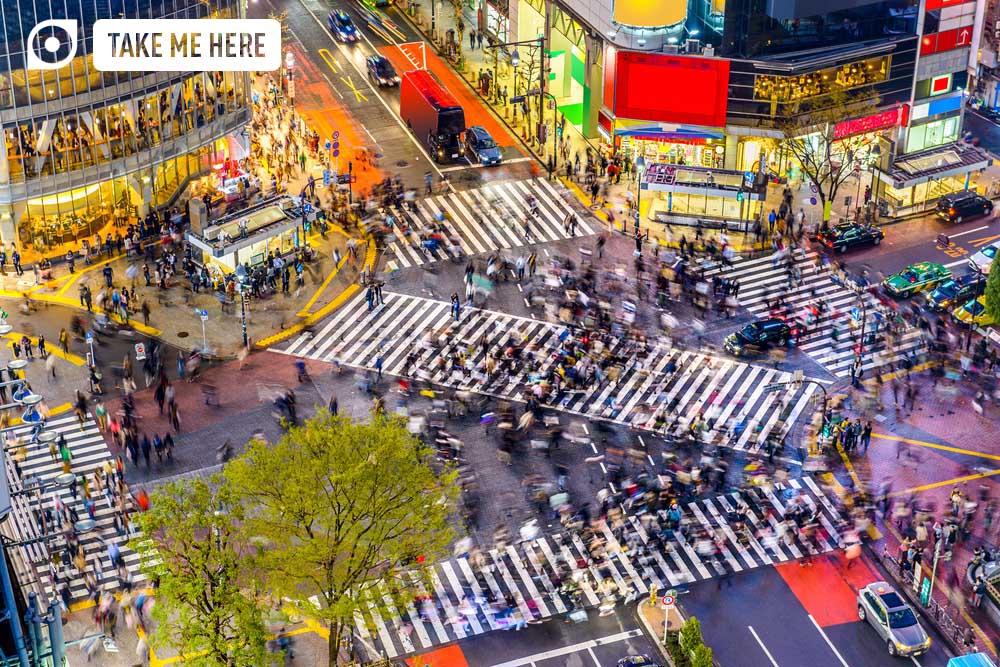 A time-lapse photo of Tokyo's Shibuya Crossing, one of the busiest crosswalks in the world. Photo: Shutterstock

When people say ‘Tokyo’ they are usually referring to the world’s largest conurbation, home to more than 30 million and an area that takes in the port city of Yokohama. By itself Japan’s third-largest city by population, Yokohama has a flavour all of its own. It’s just 30 minutes from central Tokyo.

When in town, must-sees begin and end at the waterfront. From the bayside you can amble over to nearby Chinatown and get stuck into a solid meal. The Yokohama Red Brick Warehouse is a pair of Western-style warehouses dating from the 1920s, when they made up the Customs Inspection House for Yokohama Bay. The buildings have been restored and converted into an attractive shopping centre housing 40 different shops, bars, cafés and restaurants. They’re right on the water and afford great views of the Yokohama skyline on the bay.

Another popular spot, Yamashita Park is a great place to survey the harbour. Nearby are some old homes that were occupied by the first Western traders in Japan, as well as Chinatown, formed by settlers who arrived as the port opened up, and now Japan’s largest.

Shizuoka, capital of the prefecture of the same name, straddles Japan’s Pacific Coast. Nearby Nihondaira is a popular beauty spot with long views stretching to Mount Fuji and the sea. Other points of interest within the city include Sumpu Park – set in the grounds of the former Sumpu Castle, of which the East Gate and the Tatsumi Yagura Turret have been beautifully restored; the Shizouka Sengen Shrine; and the Sumpu Museum.

For fans of rugby and cars, you can't do much better than Toyota. The eponymous car-manufacturing giant, with several of its manufacturing plants based here, actually gave the city its name (it was known as Koromo up until 1959). This is an industrial city, bounded by mountains to the north. Toyota is linked to the world through its motor heritage – its sister city in the UK is Derby (home to a Toyota factory) and in the USA, Detroit – the original ‘Motown’. Toyota Taikan (the Toyota Showroom) is a great place to see Toyota’s latest models – including environmentally friendly cars – plus information on Toyota’s role in society and their participation in motorsports. Note that tours of the showrooms must be booked in advance. 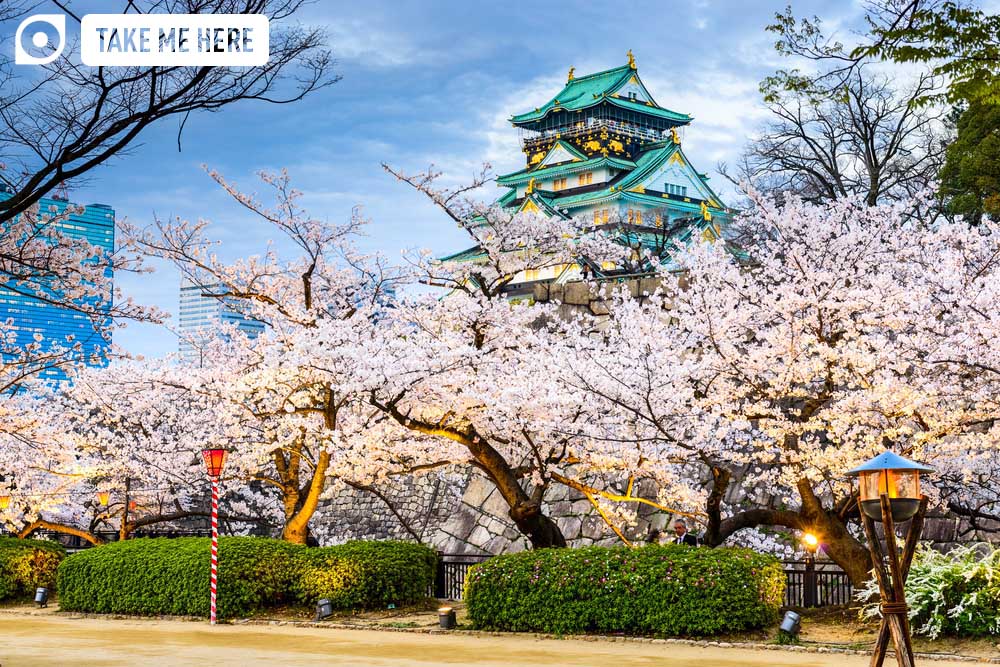 Osaka Castle, with a row of cherry blossom. Photo: Shutterstock

Osaka, only 40km (25 miles) from Kyoto, is an energetic, street-smart city. It is also the base for Japan’s well-known electronics manufacturers, Panasonic Corporation and Sharp Corporation, and is a leader – together with Nagoya in Chubu – in the development of robotic production techniques. Tokyo may be Japan at its most modern, but the great commercial and industrial complexes of Osaka (and Kobe) are the centres of Japan’s international commerce.

Osaka has its fair share of historic attractions, with the mighty Osaka Castle and temples such as Shitennoji, but it’s areas like the buzzing, neon-drenched Dotonbori entertainment district, with its restaurants, bars and theatres, that best represent the city. The entertainment continues out in Osaka Bay, where the Universal Studios Japan amusement park is a huge draw for Japanese travellers.

Osaka is also known for its numerous rivers, its excellent restaurant scene and the character of its people: straightforward, business-savvy jay-walkers who know how to eat well. While sophisticated Kyotoites are said to spend their month's wages on clothes, Osakans prefer to dispose of their hard-earned yen on culinary delights.

Like Osaka, Kobe offers visitors a mixture of fun and tradition. The European architecture in the Kitano-cho area, not to mention the colourful Nankinmachi Chinatown, can be traced to the early days of Kobe port, while the Rokko Island development is all modern amusements.

Although Kobe is lacking in fantastic attractions for travellers – and so usually overlooked – this is one of the most liveable and attractive cities in Japan, perched on hills overlooking the harbour.

Away from the city, Himeji makes for one of the most rewarding day trips in Japan for anyone with an interest in feudal history –  Himeji-jo is without a doubt the finest castle still standing in Japan.

Fukuoka is reportedly where both tea and Buddhism were introduced to Japan, and Korean captives brought back here were responsible for starting up a sizeable pottery industry. Today, with a population of over 1.4 million, Fukuoka competes with Kitakyushu as the largest city on Island. It certainly has more soul.

The city remains an important hub in regional trade and commerce, but while shopping and hotel complexes such as the glistening Canal City dominate the skyline, Fukuoka still retains a lot of charm at ground level. Canals crisscross the central urban area and in the evenings and at weekends small stalls selling snacks and alcohol are set up on the paths beside the water, each an oasis of relaxation and merriment for the hordes of harried sararimen (‘salarymen’) wending their way home from work. 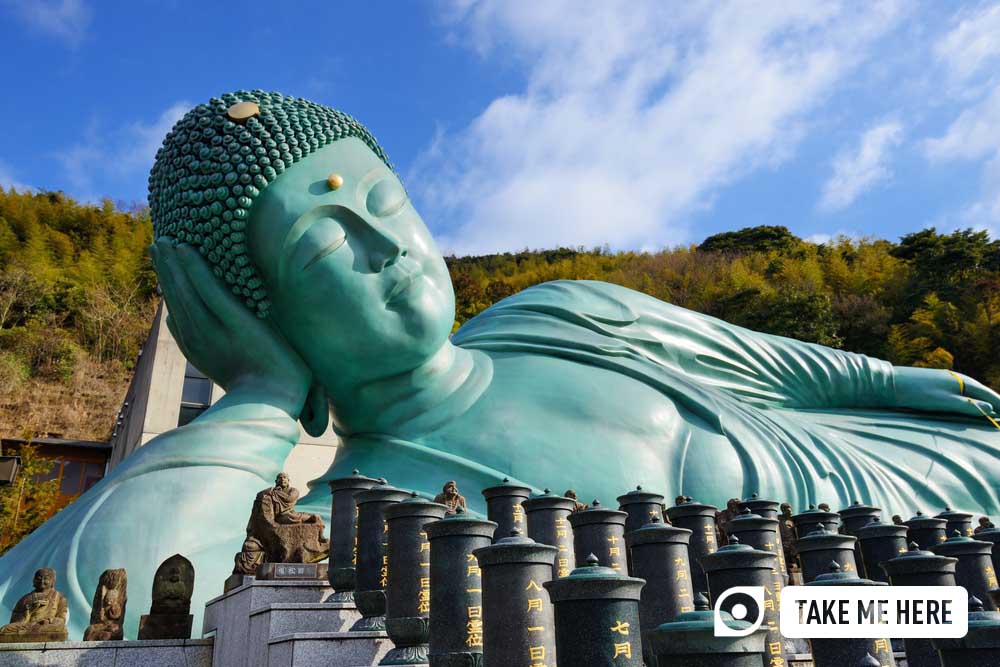 The Reclining Buddha at Nanzoin Temple, in Fukuoka. Photo: Shutterstock

Although it isn’t a popular tourist destination, Kumamoto is an interesting and dynamic provincial capital. The city of over 700,000 people is best known for its 17th-century castle, the 350-year-old Suizenji-jojuen (Suizenji Park) and its horse-meat sashimi. Kumamoto also has the most successful technical research park (adjacent to the airport) in Japan. Kumamoto Prefecture has a sister-state relationship with the American state of Montana, due more to the power and influence of the former American ambassador to Japan, Mike Mansfield, a Montanan, than to any similarity between the two places.

Workaday Oita was formed in 2005, when the towns of Notsuhara and Saganoseki merged into one. The area is really famous for its surrounding sights, rather than for the city itself. Nearby Beppu is a resort-town famous – and thus highly commercialised – for its jigoku, or variously coloured ponds of water and mud that steam and boil, as well as its hot springs. A popular destination for Japanese tourists, Beppu is gaudy and rather tacky and a far cry from the serene elegance of Japanese travel posters. Besides the hype, there are other hells, more than can be experienced in a lifetime, including: Blood Pond Hell, a vermillion-coloured boiling pool; Sea Hell, a boiling mud pond 120 metres (400ft) deep; and Mountain Hell, a mud pond in the hills, complete with statues of gorillas. All these are far too hot for bathing, but in the many onsen inns, comfortable hot-sand and hot-mud baths are available.

Taking a trip to Japan with Insight Guides

Our local experts can help you with the planning and booking of your trip to Japan, even during the Rugby World Cup. Simply get in touch to get the ball rolling, and we'll do the rest!