Railways are an integral part of the landscape in Europe and arguably the best way to travel the continent. Providing an endlessly changing procession of scenery, travelling by train can be a truly magical experience. Here is our pick of some of the best railway journeys in Europe. 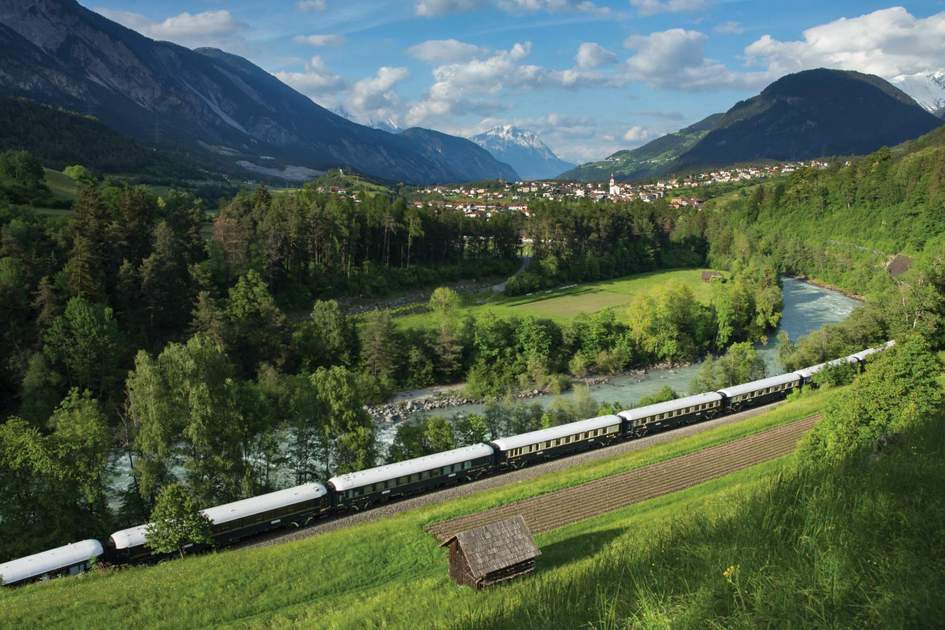 Every day, trains transport countless millions of people and move innumerable goods from one place to another. It’s hard to believe that train travel is actually only a relatively recent phenomenon. The railway network that has developed since England's Stockton and Darlington Railway opened as the first passenger line in 1825 has changed the world beyond recognition.

The train remains one of the most civilised and romantic forms of overland transport, while the freedom rail travel gives to read, work or gaze out of the window at the landscape rolling by is unrivalled. And travelling by train is more eco-friendly than travelling by car or plane. When you travel by train you are making a major contribution to minimising the environmental impact of your journey.

Chosen primarily for their scenic merits, we have chosen train journeys ranging from international trips on the luxurious Venice Simplon-Orient-Express to shorter rides undertaken by antique locomotives and carriages on the island of Mallorca. Read on for our pick of some of the best railway journeys in Europe.

A gorgeous journey through the wild country of the Yorkshire Dales, the Settle-Carlisle Railway is possibly Britain’s most spectacular main line, and certainly one of the best railway journeys in Europe. Sit back and relax as you are transported through the grandeur of the Pennine landscapes. And when you feel like stretching your legs, take the opportunity to enjoy one of the invigorating self-guided walks from stations along the route.

The northbound journey on the Settle-Carlisle Railway actually starts in the city of Leeds, heading through the towns of Saltaire and Skipton before the proper journey begins at the quaint market town of Settle, which is home to the compact Folly Museum and easily explored on foot from the station. Heading north, the line climbs steadily as it passes through the Yorkshire Dales National Park, offering many wonderful walking opportunities from all the stations within it.

Of several notable tunnels and viaducts along the route, Ribblehead Viaduct is the most impressive on the railway, stretching 405 metres across the windswept moors. North of Ribblehead, the train passes through Dent, the highest main-line station in England, en route to the northern reaches of the Dales at the village of Aisgill, from where it continues on a falling gradient pretty much all the way to the city of Carlisle.

Built in the late 19th century, the 73-mile-long Settle-Carlisle Railway is a significant regional feature that plays a major part in the local economy. This year marks the 30th anniversary of the line being saved from closure. To celebrate, a special Anniversary Express excursion is running on Saturday 13 July, 2019, from Carlisle to Chester and back again. 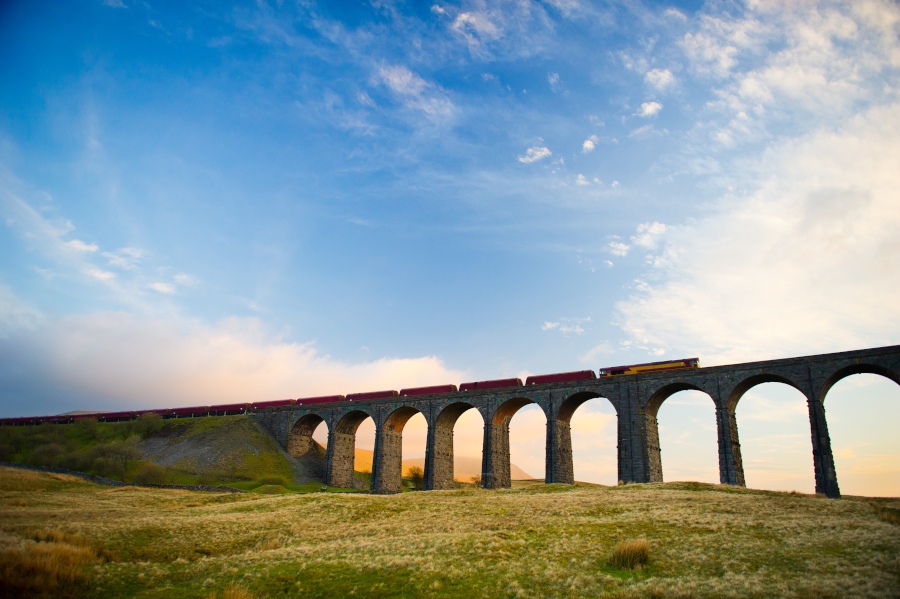 A 1,058-mile, 29-hour journey from London to Venice, this is the most romantic railway journey in Europe. It’s not just a trip through Europe, but a trip back to the Golden Age of travel on the Venice Simplon-Orient-Express. Everything from the exquisitely furnished period carriages and the luxury private sleeper cars, to the immaculately-dressed staff, champagne bar and gourmet cuisine brings the timeless glamour of the 1920s to life. There are a number of routes available, but below we outline the trip from London to Venice.

Your journey begins at London Victoria where you will pull out of the station on the iconic Belmond British Pullman train with its distinctive chocolate and cream carriages. Who knows? You may even be in the very same carriage that Grace Kelly once travelled in. Lean back on your sumptuously cushioned seat and sip a sparkling Bellini as you are whisked through the Kent countryside towards Folkestone, where you’ll board a luxury coach for transfer to the Channel Tunnel. On arrival in Calais, arguably the world's most elegant trains awaits you – the Venice Simplon-Orient-Express. At just over 400 metres long, the 17 sleeper carriages make up one of the longest passenger trains in Europe.

After you’ve been shown to your own compartment, the journey begins. Relish fine wines and dine on Brittany lobsters and Mont St Michel salt marsh lamb as you travel through France, mingle with fellow guests in the Bar Car, retire for the night in your own luxurious sleeping car, and wake up to breakfast amid the stunning scenery of the Alps, all savoured from the comfort of your cabin.

Marvel at ancient castles and churches in Switzerland, Liechtenstein and Austria, before arriving in the mountains of St Anton. After a brief stopover in Innsbruck, you will climb up to the highest point of the journey at 1,375 metres, to relish a gourmet lunch whilst passing through mountainous Alpine landscapes, before beginning the descent into Italy. You will travel past tiny villages, medieval towns, and the spectacular moated Buonconsiglio Castle in Trento, before passing through a number of famous Italian cities such as Verona, Vicenza, and Padua prior to crossing the long causeway that connects Mestre on the mainland with the island setting of Venice, where you disembark at Santa Lucia station. 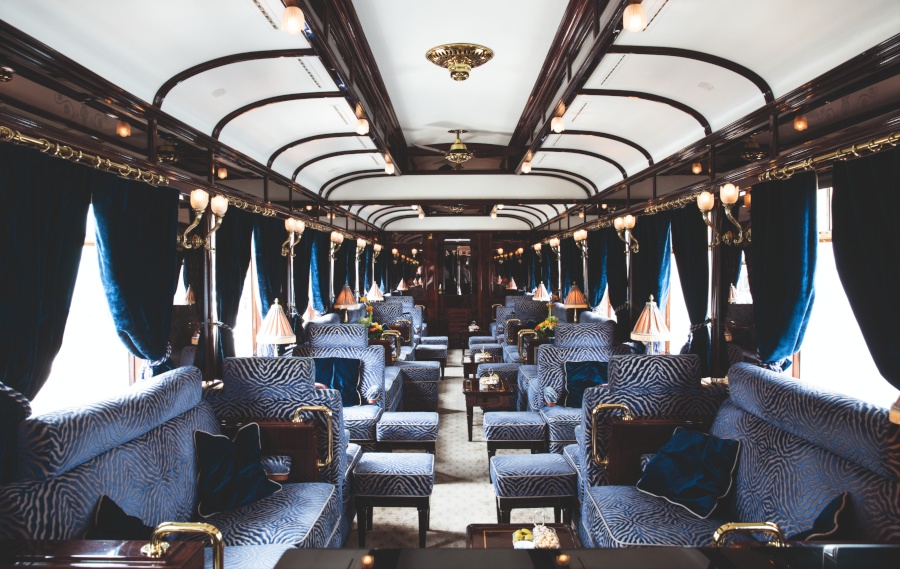 The inland Railway (Inlandsbanan) – Sweden’s ‘trans-siberian’ railway runs from the town of Gällivare in the north of the country, down to Östersund and Kristinehamn, with connections on to Stockholm, traversing some of the most remote and breathtakingly beautiful regions of the country. It is possible to make stopovers en route to stay for a night in local villages to walk in the mountains, or just soak up the magnificent wilderness landscape.

The modern town of Gällivare is the starting point for the journey, from where the line will soon be passing through scenery that you will become familiar with over the course of the journey – mile upon mile of verdant forest punctuated by lakes and rivers.

Shortly after passing through the town of Jokkmokk, the train guide announces that you are about to cross the Arctic Circle, where the train stops so passengers can take photos at the Polcirkeln (Polar Circle) platform. A stop-off at Moskosel allows you to visit the small railway museum that has been set up in the station.

Sorsele marks the halfway point on the northern section of the Inlandsbanan to Östersund, after which it is possible to spot herds of reindeer and moose moving across the windswept landscape. Other wildlife that you may be able to glimpse from the train includes bears, lynxes and wolves. If you make the journey during the winter you may be lucky enough to see the spectacular colours of the northern lights moving across the dark night skies.

Highlights of the southern section of the Inlandsbanan include Gratback, the highest point of the journey at 524 metres, where the train stops for around 30 minutes so the train guide can escort passengers to visit one of the well-established local bear dens. Before arriving at Orsa the train stops on an arched steel bridge above the scenic Helvetes waterfall. Soon after this stop, the train pulls into Mora, the terminus for intercity passenger trains from Stockholm, before proceeding to Kristinehamn, the final destination and home to the largest Picasso sculpture in Europe that stands 15 metres high on the shore of expansive Lake Vänern. 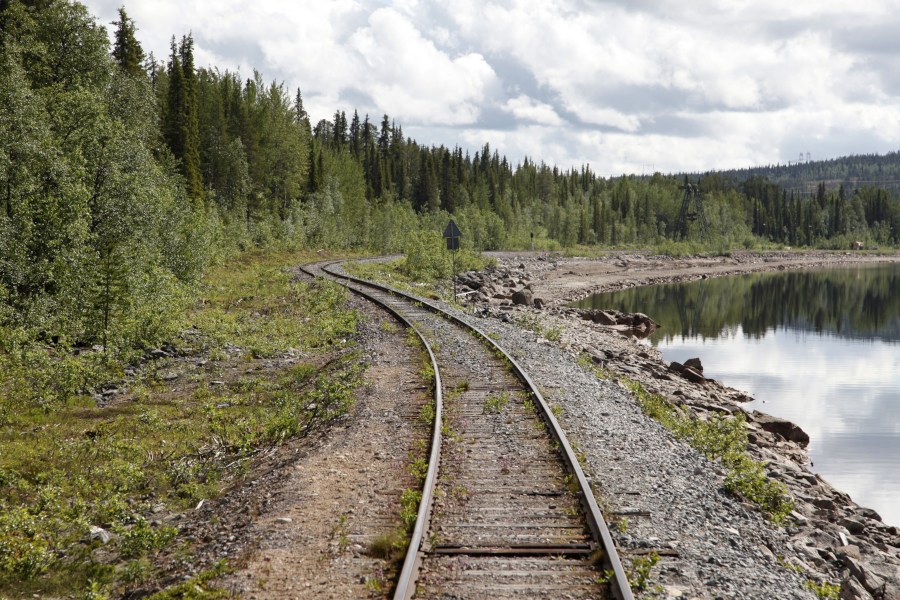 Mallorca isn’t exactly renowned for its impressive railway network, in fact, the island is still working on developing an efficient railway system. However,  travelling on the vintage electric train on the Sóller Railway that runs from Palma de Mallorca to Sóller is a certainly a lovely way to see parts of the island. The narrow-gauge line opened in 1912 and has changed very little since. The entire railway is 28km long and takes just under an hour to travel along. The train begins at the Mallorcan capital Palma, passes through olive groves, pretty towns and craggy mountains, before ending up in beautiful Sóller valley, stopping at a number of tiny stations along the way, where you can get off to explore.

Roughly halfway along the route, the train arrives in Bunyola, a lovely little town that is a base for hikers, and close to the ridge of the Serra de Tramuntana mountain range. The train snakes through a number of tight curves and tunnels on the way up the mountain, climbing 200 metres over a 7km stretch. Once it emerges on the northern side of the ridge, you are greeted by a spectacular panorama of Sóller valley and the mountains beyond. The train then descends into Sóller, where the line ends. Make sure you take the time to explore this pleasant little town before heading back to Palma. 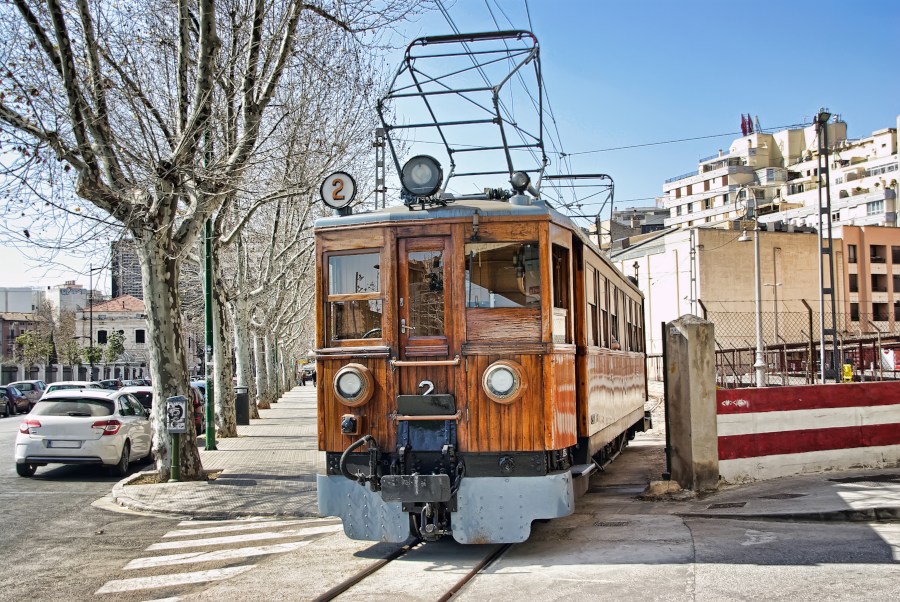 Read more about these and many other spectacular railway journeys in our new book Insight Guides Great Railway Journeys of Europe, which provides a country-by-country review of Europe's most captivating routes accompanied by stunning photos, fascinating detail about the history of railways, and practical information for those planning their own railway adventures.