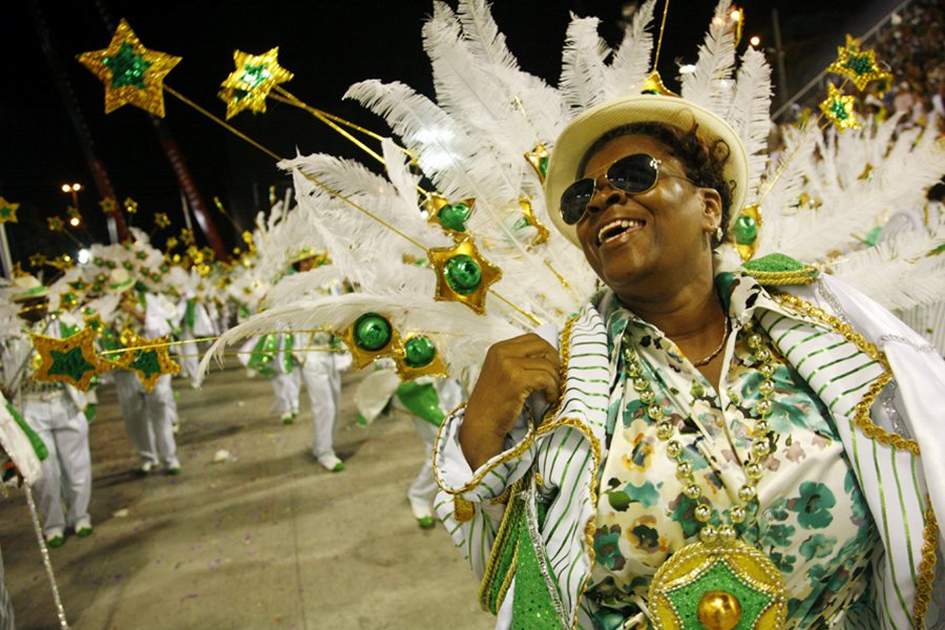 Brazil's Amazon city of Parintins has found a way to make a centuries-old cowboy tale into an annual festival of music, color, and imagination that rivals Carnival.

The last weekend of June marks the three-day Parintins Folk Festival, organized annually since 1913 and centered around a recounting of the Boi-Bumba fable. Two rival groups – Caprichoso and Garantido – vie with each other for popular acclaim as they fill the town with banners and balloons in their respective colors, blue-and-white for Caprichoso and red-and-white for Garantido. Each group, composed of up to 3,000 marchers and 500 musicians, parades through the streets for the staging of the Boi-Bumba legend. The best show, based on costumes, music, and adherence to Amazon folklore, is the winner.

The story reads like a folk opera. Boi-Bumba recounts the tale of a black ranch hand named Francisco whose pregnant wife, Catirina, pleads for a “special meal” of succulent bull’s tongue. Francisco obliges by slaughtering the ranch owner’s favorite bull. But his action turns him into a fugitive. In the trackless jungle, he meets a native shaman and his luck changes. Together they conjure up the Amazon spirits, who bring the favored bull back to life. Now, it’s the ranch owner’s turn to slaughter a bull as he welcomes back the prodigal ranch hand.

The Boi-Bumba legend offers broad scope for depicting Amazonian animals and colorful folkloric characters. Costumes, especially the headdress representing the bull, have become more elaborate with each retelling. The story is acted out through intricate dance routines to the beat of the toada, an hypnotic rhythm based on Amazon Indian music. Each presentation can last up to three hours.

As with Rio’s Carnival, the Parintins Folk Festival has become somewhat commercialized in recent years. Laser shows and fireworks have been added. Beer companies have emerged as sponsors. Some of the better-known toada singers have released albums and turned professional. As many as 50,000 spectators turn up for the three days of shows, parades, and regional cuisine, arriving by boat and plane, since Parintins has no road links to the outside world. Meanwhile, in 2006 Parintins became the first Brazilian municipality with city-wide WiMax internet access, making it totally plugged in while still geographically remote.

Originally called Bumba-Meu-Boi, the story and dance behind the festivities are thought to have originated in the state of Maranhão in the 18th century. They were based on European models but modified by the region’s slaves. In some retellings, Francisco becomes Father Francisco, or Chico, a black slave. The hand of the Jesuits can be seen in the themes of death, resurrection, and redemption. As in the Old Testament, the prodigal is always received “with great rejoicing”, in this case a good excuse for explosive music and dance.

Folkloric groups in Maranhão still make Bumba-Meu-Boi presentations in June. The tradition is also kept alive in Manaus and other Amazon-basin cities, and in other Brazilian states, but Parintins has no rival when it comes to fervor and spectacle. In the southern states, it is called Boi-de-Mamão or Boizinho. In some parts of the northeast, it is Boi-de-Reis. The phrase Bumba-Meu-Boi is akin to the American cowboy chant, “Get along, little doggies”.

The Great Drought of 1877 sent farm workers from Maranhão to the Amazon in search of work as rubber-tappers. The Bumba-Meu-Boi tradition they brought with them was gradually enriched by Amazon music and folklore, making it one of the most complete mixtures of Amerindian, European and African cultural elements in Brazil.

To find out more about Brazilian culture and traditions, pick up a copy of the fantastic Insight Guide Brazil.