Oscar Niemeyer and the architecture of Brasilia 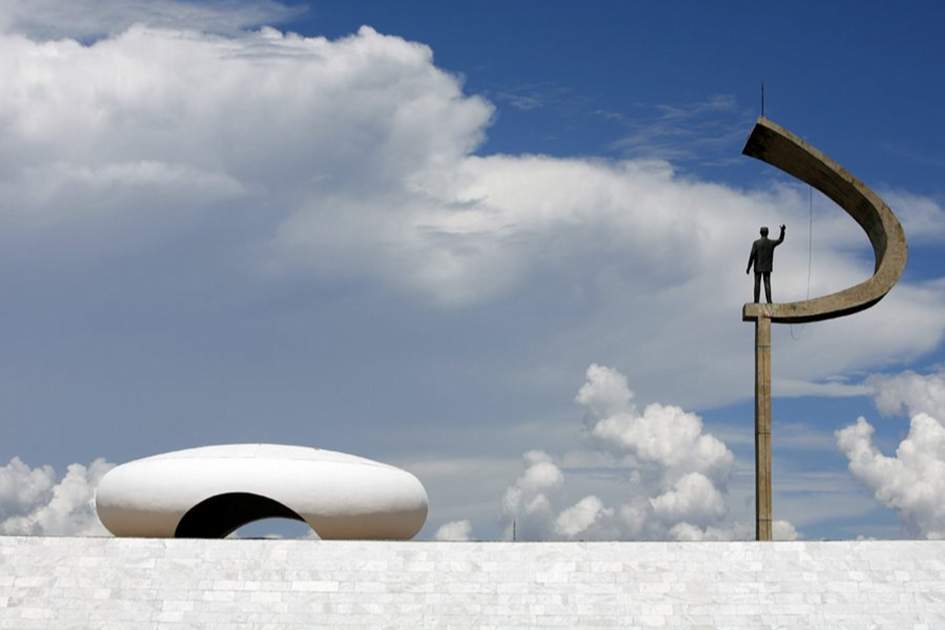 Memorial JK with the statue of Juscelino Kubitschek

For more than two centuries, the aim of Brazilian visionaries was to fill the vacuum in the center of their country with a new city. In 1891 Brazil’s first republican government sent a scientific team to survey possible sites in Goiás, which is watered by three great rivers – the Amazon, the Paraná, and the São Francisco. For the same purpose, a later commission was sent, in 1946, to conduct an aerial survey. Yet until the election of president Juscelino Kubitschek in 1955, Brasília remained simply an idea.

Kubitschek made the development of Brasília the centerpiece of his campaign to modernize the country. The pace of the project was determined by politics; Kubitschek knew that if the city was ever to be completed, it had to be done by the end of his five-year term. He selected as his architect Oscar Niemeyer, a Communist and student of Le Corbusier. An international jury selected the city plan, which was the work of controversial architect Lúcio Costa, and Niemeyer designed all the major public buildings.

The work began in September 1956 on the highest and flattest of the five sites identified by the aerial survey. The first task was to build a runway, which was used to bring in the initial building materials and heavy equipment. Brasília thus became the world’s first major city conceived in terms of air access. Only after construction had begun was a road pushed through from Belo Horizonte, 740km (460 miles) to the southeast. A dam followed, and Lake Paranoá began to emerge. By April 1960, the city housed 100,000 people and was ready for its inauguration as capital. In 1987 it was declared a World Heritage Site by UNESCO, and in 2002 an elegant triple-span steel bridge was built over Lake Paranoá – Juscelino Kubitschek Bridge. The city celebrated the 50th anniversary of its inauguration in 2010, and in 2014 it will host a number of the matches to be played in the FIFA World Cup.

Most visitors will come to Brasília the way Kubitschek first came – by plane. After flying over the semi-arid and sparsely inhabited Central Plateau, you see the city suddenly emerging as a row of white building blocks set along a gentle rise above the artificial lake. As it is a major domestic airline hub, it is relatively easy to include a quick visit to Brasília while travelling around the country.

Overland, the most spectacular approach is by road from the northeast. After driving through miles of red dust and gnarled scrub, known as cerrado, you reach a eucalyptus-lined ridge just beyond Planaltina, the oldest town in this region. Brasília is laid out in a gleaming arc in the valley below.

Like the United Nations Secretariat in New York, the present-day city is trapped in a 1950s vision of the future. Built around the automobile, its urban core is a complex of super-highways, which creates a hostile environment for pedestrians.

While under construction, Brasília captured the world’s imagination, but soon afterwards, the world lost interest, and Brasília became synonymous with technocracy run wild. Yet to this day, the building of the city remains a matter of great pride among Brazilians. It was the only post-war project intended to serve the people, not industry; and it was entirely financed and built at the behest of an elected president, in a time of democracy. For all the flaws that are now evident, Lúcio Costa spoke for the majority of Brazilians when he asserted: “The only important thing for me is that Brasília exists.”

This is located at the highest point (224-meter, 735ft) of the Eixo Monumental (Monumental Axis) that runs through the centre of the city. An informative map at the foot of the tower explains how the streets are laid out. An elevator to a viewing platform 75 meters (245ft) up the tower gives a bird’s-eye view of Costa’s plan: two gently curving arcs indicating the residential areas of the city, bisected by the Eixo Monumental containing the buildings of government. 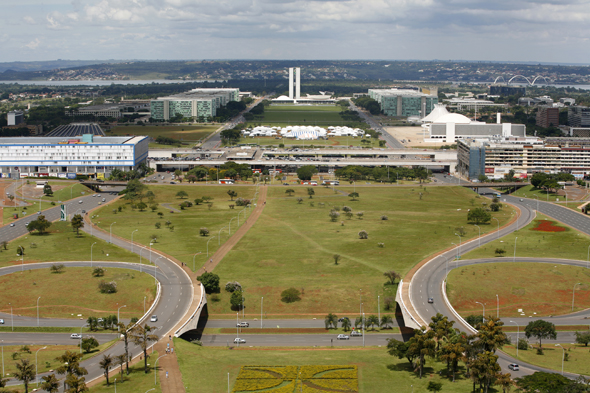 This building now houses the Foreign Ministry, which floats in splendid isolation in the midst of a reflecting pool.

The six curtains of falling water on the exterior echo the natural waterfalls around Brasília. 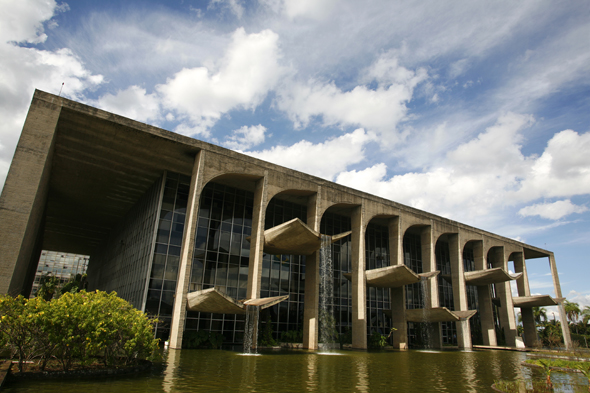 This memorial to Kubitschek was the first building in Brasília that the military allowed Niemeyer to design after their takeover in 1964. The curious sickle-shaped structure on top of the monument, in which the statue of Kubitschek stands, seems more like a political gesture by Niemeyer than a symbol of Kubitschek’s beliefs. 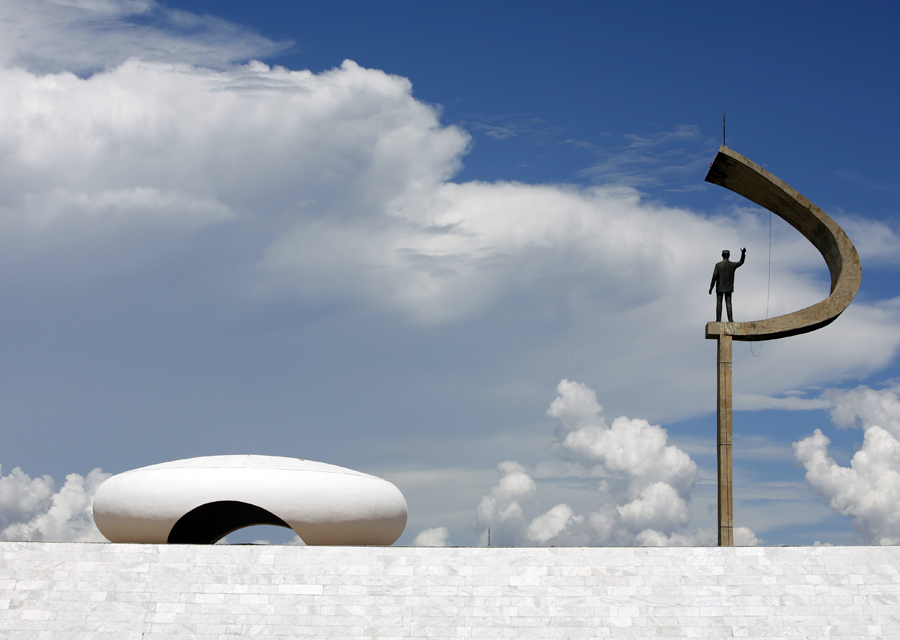 The Esplanade of the Ministries is a row of 17 identical pale-green box-shaped buildings running down both sides of the vast open boulevard. Each building houses a different government department, whose name is emblazoned in gold letters on the front. Since every ministry has long since outgrown its original quarters, they have sprouted additions at the back, approved by Niemeyer and UNESCO, connected in mid-air by concrete tubes to their mother ship. In the late 1960s, several buildings were subject to arson attacks, reportedly by disgruntled civil servants protesting against their forced move from Rio, although this rumour was never substantiated.

The Plaza of the Three Powers is a dense forest of political symbols. Named after the three divisions of power under the Brazilian Constitution, the executive is represented by the Palácio do Planalto, on the left, housing the president’s offices, while the judiciary is represented by the Supremo Tribunal Federal on the right.

This is the building whose twin towers' silhouette is the signature of Brasília.

At the western end of the Esplanada dos Ministérios, this is an unusual concrete building with a spectacular, stained-glass domed roof. Nearby, the newest buildings on the Esplanada dos Ministérios are the Biblioteca Nacional Leonel de Moura Brizola (National Library) and the Museu Nacional Honestino Guimarães (National Museum), that together make up the Complexo Cultural da República João Herculino. These two buildings were completed in 2006, following Niemeyer’s original plans. 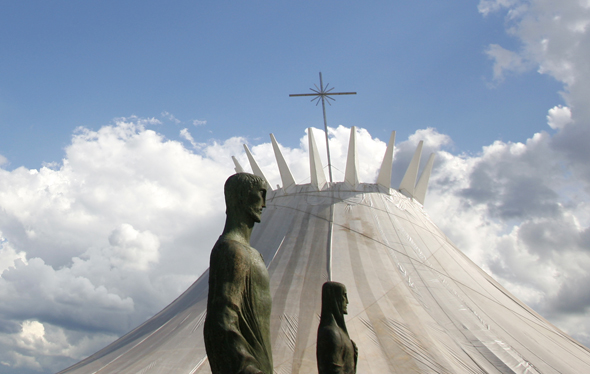 On the north side of the Eixo Monumental, near the Rodoviária, is the pyramid-shaped Teatro Nacional, where art shows and other exhibitions are held.

Further away, on the shores of Lake Paranoá, is the Palácio da Alvorada. The official presidential residence, the Alvorada is regarded as one of Niemeyer’s masterpieces, and one of the first projects to be completed. It is a two-story, rectangular building whose main features are the marble columns that have become a symbol of Brasília. For security reasons it is no longer open for visits by the public. 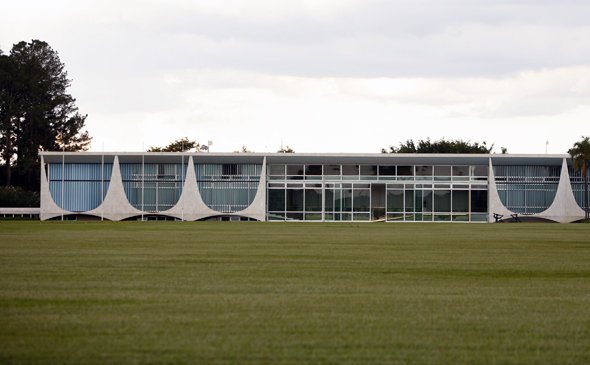 Named after Juscelino Kubitschek’s wife, this is also known as Parque da Cidade (City Park). This is a vast, green area of 42 hectares (104 acres) in the centre of Brasília, close to the Torre de Televisão. Here local people and visitors alike come to exercise, sunbathe, meet friends, or just relax.

Santuârio Dom Bosco in 702 South, is a cubic chapel with walls made entirely of blue-and-violet stained glass. 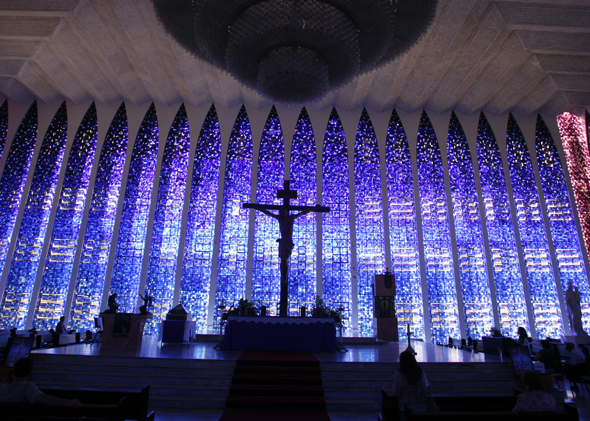 This Temple of Goodwill was built in the form of a seven-sided pyramid in 1989 (seven is said to be the number of perfection) and is crowned with one of the world’s largest crystals.

Find out more about Brasilia in our Insight Guide to Brazil. This in-depth title is also available as an e-book.

We did the suggested tour of Lunar Valley and Death Valley followed by watching an amazing sunset at a look out to the desert valley and mountains. This was so different from expectations. Very interesting as the light changed and moved! The salt flats... Read more