Byzantine mosques and Ottoman palaces: the grandest buildings to see in Istanbul 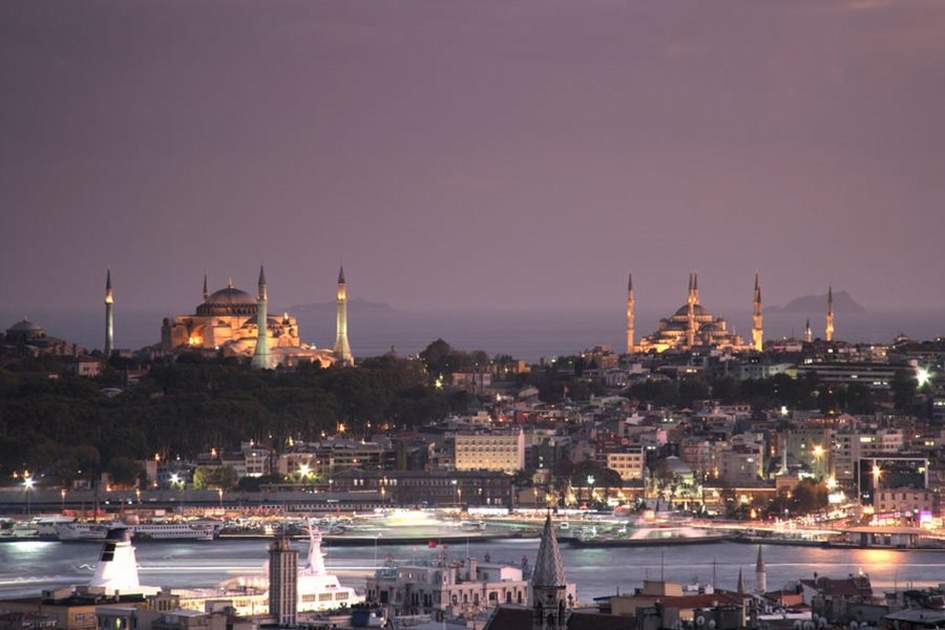 View over Istanbul by night

Maybe it's the magic of its famous trio of names - Byzantium, Constantinople and Istanbul - but this is a city which has always brought out the fantasist in visitors. If you are a fan of glittering mosaics, gleaming marble and atmosperic courtyards, the city's architecture will not disappoint. Three great civilisations have shaped the heart of Old Istanbul - Roman, Byzantine and Ottoman. Although little remains from Roman times, the city's Byzantine legacy boasts one of the world's greatest sacred buildings, the Hagia Sophia, and the most glorious of Ottoman mosques, the Süleymaniye, was built by Turkey's finest architect, Sinan.

Of the few ­remains of the Byzantine city, the most remarkable building is Hagia Sophia (also known as Aya Sofya). For almost 1,000 years, this was the greatest church in Christendom, an architectural wonder built by the Byzantine Empire to ­impress the world.

The finest materials were used in its construction – white marble from the islands of the Marmara, yellow marble from Africa, gold and silver from Ephesus.

The last Christian service ever to be held in Hagia Sophia took place on 28 May 1453, the day before Constantinople fell to the Turks. Mehmet the Conqueror immedi­ately conver­ted the building to an imperial mosque. Hagia Sophia served as a mosque until 1935, when Atatürk proclaimed that it should become a museum.

The scale of the interior is overwhelming: the dome is around 31m (100ft) in diameter, and floats 55m (180ft) above the floor – the same height as a 15-storey building.

Topkapi Palace is the former residence and seat of government of the Ottoman sultans. Begun in 1462 by Mehmet the Conqueror, it was extended by each succeeding sultan until it became a miniature city, which ­included mosques, lib­raries, stables, kit­chens, schools, the imperial mint, treasuries, barracks, armouries, government offices and audience halls. At its height it supported a population of nearly 4,000.

In 1924 it was converted into a museum, and has been undergoing a continuous programme of restoration ever since. It is the city’s most popular tourist attraction, and deserves at least several hours to do it justice. Most popular is the Harem, which housed the private quarters of the sultan, his mother and his wives and concubines. Its network of staircases, corridors and courtyards linked the sumptuously decorated chambers of the royal household, and harboured a claustrophobic world of ambition, jealousy and ­intrigue.

The six minarets of the Blue Mosque dominate the skyline of the Hippodrome. Known in Turkish as Sultanahmet Camii (Mosque of Sultan Ahmet), it was built between 1609 and 1616 for the Sultan Ahmet I, after which it became the city’s principal imperial mosque because of its proximity to Topkapi Palace. Once inside you will see how the mosque earned its familiar name. The very air seems to be blue – more than 20,000 turquoise Iznik tiles glow gently in the light from the mosque’s 260 windows, decorated with lilies, carnations, tulips and roses. The mihrab and mimber are of delicately carved white marble, and the ebony window shutters are inlaid with ivory and mother-of-pearl.

The outline of the Mosque of Süleyman the Magnificent (Suleymaniye Camii), rises from a site above the Golden Horn. Deemed the finest Otto­man building in Istanbul, the mosque is a tribute to the ‘Golden Age’ of the Ottoman Empire.

Süleymaniye Mosque and its complex of buildings were built between 1550 and 1557. Legend has it that jewels from Persia were ground up and mixed in with the mortar for one of the minarets. The interior is vast and inspiring, flooded with light from the 16th-century stained-glass windows.

Sultan Abdül Mecit (reigned 1839–61), continuing the programme of reform begun by his father Mahmut II, decided that Topkapi Palace was too old-fashioned. He com­missioned a vast new palace on the shores of the Bos­phorus, on the site of a park that had been created by filling in an old harbour (dolmabahçe means ‘filled-in garden’). Completed in 1853, the palace was intended as a statement of the sultan’s faith in the future of his empire, but instead it turned out to be a monument to folly and extravagance. Its construction nearly emptied the imperial treasury, and the running costs contributed to the empire’s bankruptcy in 1875.

Inspired to go? Buy one of our Istanbul guides today.