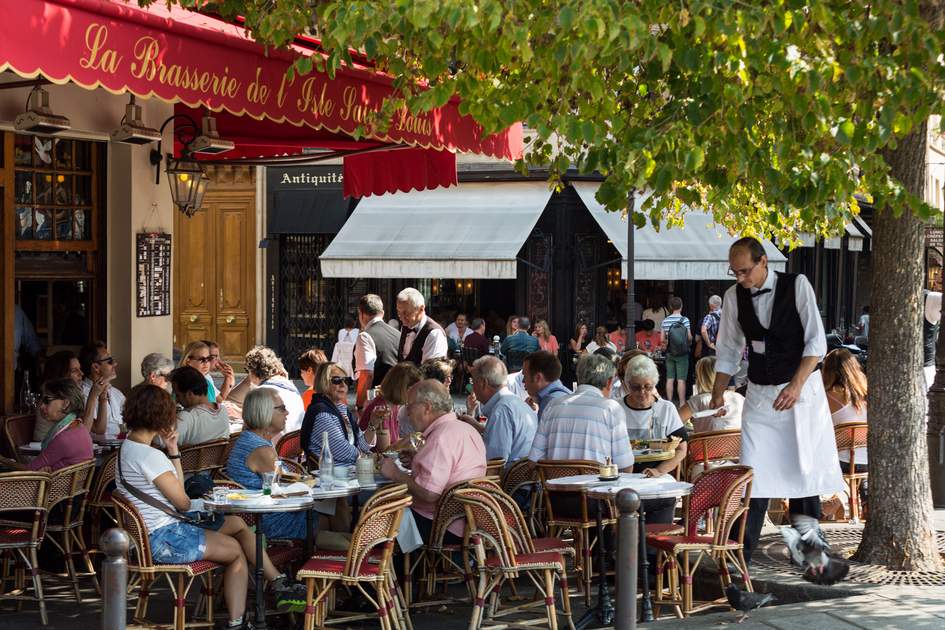 The neighbourhood café is the Parisian’s decompression chamber, easing the transition between Métro-boulot-dodo – commuting, working and sleeping. It offers a welcome pause in which to savour a p’tit noir (espresso) or anapéritif, empty the mind of troublesome thoughts and watch people go by. The café is also the place to meet friends, have a romantic tryst or even do business in a relaxed atmosphere.

The first café in France was Le Procope in 1686, and the literati soon began to congregate there, keen to exchange ideas. More sprang up all over the country, and it wasn’t long before there was at least one in every village. In the 19th century, the neighbourhood zinc, named after its metal counter, became part of the fabric of French life. In Paris, each café developed its own character, and with the widening of the boulevards, their tables spilled out onto the pavements. By 1910 there were 510,000 zincs in France, but today café life is waning.

While the invasion of fast-food restaurants is partly to blame, changes in the French way of life are also culpable. When customers move out to homes in the suburbs, they tend to “cocoon”, staying in to watch TV, and the local café eventually has to close. Then there are the ageing proprietors to consider: a café is traditionally a family business, but today fewer sons and daughters are prepared to take on gruelling 16-hour days.

Sadly, even the atmosphere of remaining cafés is not what it was. There is formica where once there was marble. Piped muzak and the beep of video games have replaced accordionists and the furious volleys of players on baby-foot machines. Only the Gauloise-fed haze (attitudes to the 1992 smoking ban are casual) and the hazards of the lavatories (some still holes in the ground) are the same.

Take a trip: Plan your trip to France

In search of the authentic Parisian café

Yet all is not lost. Authentic zincs can still be found in Paris, and many are thriving. Try stylish Café de l’Industrie on Rue St- Sabin, La Palette on Rue de Seine or the tiny but lovingly restored Le Cochon à l’Oreille on Rue Montmartre. For literary atmosphere there’s the Café de Flore, where Sartre and Simone de Beauvoir wrote by the stove. “My worst customer, Sartre,” recalled the patron. “He spent the entire day scribbling away over one drink.”

A lifestyle under attack

On 13 November 2015, Islamist gunmen targeted a handful of Parisian cafés during their murderous rampage. The following days, Parisians tweeted their defiance by posting photos under the hashtag #JeSuisEnTerrasse (“I am on the terrace”).

I must say, the drivers and tour guides, were good. Two stood out, Mark, who picked us up on 9/5 for dinner at the Eiffel tower and then the Crazy horse, was great. Our driver from Amboise, Xavier, was outstanding. He also took us on the tour of villages... Read more