The Caribbean love of Cricket and Dominoes 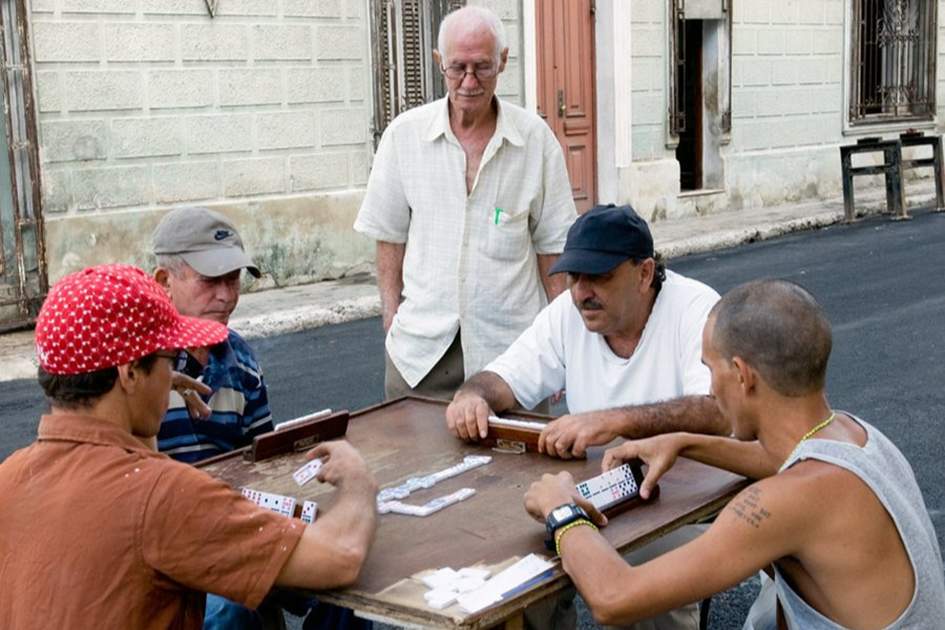 A few sharp cracks and the group of men huddled over the small table leap to their feet with a roar of jubilation. Dominoes may appear to be a sedentary game, but it is far from quiet and peaceful. It is played very fast and a game is over in minutes. The dominoes are often slammed hard down for maximum effect and the atmosphere can be tense.

Played by young and old on all the islands, it is a game for just a few players, which can be played anywhere, often out on the street in the evening or under the spreading mango tree with a tot of rum or a beer. You will rarely see women playing out on the street, but they are keen competitors too. It is a game that requires very little investment in equipment and can be played anywhere. Any sturdy, flat table will do, and all the better if you can score on it with chalk.

Dominoes is not just a social event, however. Played at club level it becomes a serious competitive sport with league matches. The World Council of Domino Federations (wcdf) is headquartered in Barbados (the word “World” is a slight misnomer, as the Caribbean dominates and Canada and the United States are the only other member countries, but the council aims to encourage wider membership). The wcdf has eight disciplines covering three-hand and four-hand dominoes: team four-hand, four hand pairs, male and female three-hand, king and queen domino, mixed pairs and female pairs. Got that?

The week-long World Domino Championship, held every other year since 1998 (it was held annually from 1991 to 1998), has been won by Barbados more times than any other country. Dominica has won a couple of times but St Lucia is Barbados’ main rival, having won the title five times to Barbados’ eight. Antigua hosted the 2008 Championship, St Lucia that of 2010, and Florida was the venue for the tournament in 2012. 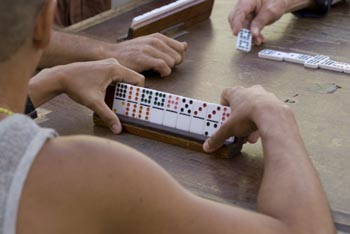 There is a campaign for dominoes to be an Olympic sport, but organizers face an uphill battle achieving the required standards. It could be many years yet before competitors are considered athletes, subject to strict anti-doping rules, however agile their minds are. Currently, club rules specify no eating, no drinking, and no talking once the game commences, but that’s it.

Dominoes originated in China, where legend has it that a soldier invented the game to entertain troops waiting to go into battle. The tiles were made of ivory and are still affectionately called “bones.” Brought to Venice in the 18th century by Chinese traders, the black and white tiles reminded Italians of the hoods of Dominican monks, and the nickname “Domini” was coined. The new parlor game of Venice and Naples soon spread across Europe to Britain and from there to the Caribbean via the sugar and slave trade.

Dominoes are used in schools to help with cognitive development and improve children’s mathematical skills. In the Caribbean it is a point of reference when islanders meet each other for the first time. Confident in their own abilities they are keen to challenge anybody to a game, wherever they are. Even Dr Ralph Gonsalves, Prime Minister of St Vincent and the Grenadines, is proud to be an honorary member of the WCDF, convinced that he is a better player than anyone else.  And who would want to argue with the prime minister of St Vincent and the Grenadines?

Cricket is much more than a game in Barbados; it is a national religion, inspiring the islanders with a fierce passion, particularly when the West Indies meets England, their old colonial masters, in a Test match.

For 5 days, the Kensington Oval, the island’s cricketing headquarters and national shrine, takes on a carnival atmosphere as supporters of both teams (Barbados almost sinks under the weight of the English fans who fly out for the event) pack the stands. With a “We must win but if we don’t, then we must still have a good time” attitude, the West Indians welcome their visitors, encouraging them to join in the fun and share their picnics and “liquid sunshine.”

The game of cricket has been described as “like abstract art – you only understand it when you have watched it for a long time.” Introduced to the island almost 200 years ago by the British as a character builder, cricket now has no class boundaries, and Barbados has produced many heroes: the “Three Ws” – Clyde Walcott, Frank Worrell, and Everton Weekes – were knighted in the 1960s; Gordon Greenidge and Desmond Haynes, one of the world’s best opening pairs; several fast bowlers; and the greatest cricketer of all time, Garfield “Gary” Sobers, who was knighted in 1975, having scored 8,032 runs, taken 235 wickets, and held 110 catches.