Escaping Bangkok: a trip to Kanchanaburi 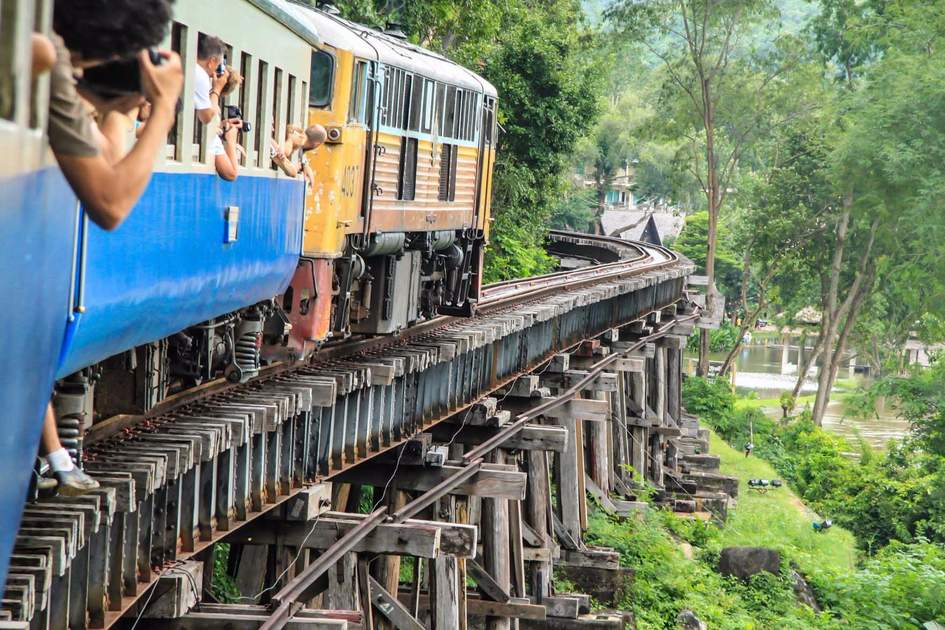 Distance: Bangkok to Kanchanaburi: 130km (75 miles); Kanchanaburi tour: 7.25km (4.5 miles)
Time: One or two days
Start: Bridge on the River Kwai
End: Kanchanaburi War Cemetery or Erawan National Park
Ideal Insight Guides' trip: The sights covered by Day 1 of this route are featured on Insight Guides' River Kwai Discovery tour. Simply modify this trip's itinerary to explore Erawan National Park on an additional day.
Points to note: It is best to hire a car to get to Kanchanaburi. Leave Bangkok west on Highway 4, head 10km (6 miles) past Nakhon Pathom, then follow Route 323 to Kanchanaburi. If you're taking this trip with Insight Guides, our local experts can assist with where to hire a car from. Alternatively, they can organise a private transfer for you. If you go by train or bus, you can get around town by tuk tuk or songthaew (open-backed taxi vans) for around B30 a go, or hire motorbikes and bicycles along River Kwai Road.

Bridge on the River Kwai

Kanchanaburi is famous as the location of the Bridge on the River Kwai, part of the ‘Death Railway’ built by prisoners of the occupying Japanese forces in World War II. The story of how some 16,000 Allied POWs and up to 100,000 Asian slave labourers died during the construction was told in the 1957 film The Bridge on the River Kwai, directed by David Lean and starring Alec Guinness. Parts of the bridge are original, but the central arches were rebuilt following Allied bombing in the war. Period steam trains are parked close by, with more at the main railway station on Saeng Chuto Road.

You can walk across the bridge, but gaps in the planking reveal long drops into the river, so people have to shuffle carefully around each other on the firm central plates between the tracks. Niches between the spans provide a refuge in case a train happens along.

The railway was built to link what was then Burma to Japanese positions in the rest of Asia, both as a supply route and to exploit the country’s natural resources. It is said that one prisoner died for every sleeper laid.

From the bridge walk 50m/yds along River Kwai Road, past the shops, to reach the World War II Museum on the right. Despite its name, this eccentric collection is in many ways a vanity project for the family that owns it; one of the two buildings here has a celebration of the family achievements on the top floor. The rest includes artefacts from Thai history and an art collection as well as war-related items. There are the remains of a wooden footbridge built by prisoners to cross the river, plus weapons and vehicles. Despite a slightly tacky ambience and poorly labelled exhibits, this is still an entertaining diversion. On the road next to the museum is a Japanese War Memorial Shrine.

After another 500m/yds you will come to a temple called Wat Chaichumpol. Adjacent to it is the JEATH War Museum (daily 8am–6pm; charge), founded in 1977 by a monk called Phra Theppanyasuthee, who later became abbot of the temple. The museum is named after the countries whose dead it is intended to commemorate: Japan, England, America, Australia, Thailand and the Netherlands. The building – which is modelled on one of the bamboo huts in which prisoners of war were incarcerated – contains newspaper clippings, personal items such as photographs and clothes, and drawings by ex-prisoners depicting their life in the camps. 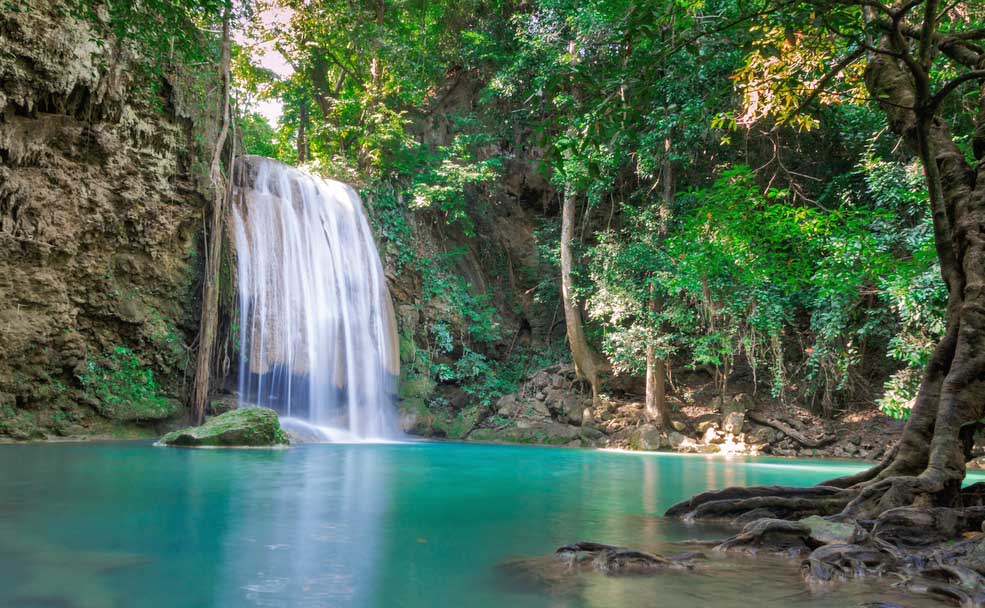 Head back along Thanon Chaichumpol, and then turn right through the monumental white city gates. Beyond the city pillar, take a left at the traffic lights along the Saeng Chuto Road, then left again after 2km (1.25 miles) into Jaokunnen Road, where the Thailand–Burma Railway Centre (daily 9am–5pm; charge), the latest of Kanchanaburi’s war-related museums, is situated 50m/yds on the right at No. 73.

The two-floor exhibition space starts with a timeline and useful maps plotting Japanese expansion in Asia and then moves through videos, models and photos showing the prisoners’ living and working conditions. During a push to complete the railway quickly, increased labour hours and poor nutrition caused the deaths of 7,000 prisoners in a five-month period to October 1943. A model of a hospital hut, with dioramas of amputations being performed, details the medical staff’s struggles to cope with equipment improvised from found objects such as old bicycles.

On the second floor, exhibits include moving personal items such as diary entries and letters from home. A café on site has snack meals and drinks.

Opposite the museum is the Kanchanaburi War Cemetery, where the 7,000 Australian, British and Dutch casualties of the Death Railway are buried or commemorated (those from the US were repatriated). Despite the tourist buses, the cemetery retains its serenity and is very moving. There is a museum tracing how the men lived their final days.

Depending on how much you want to see, day two could be long, so start as early as you can. Leave Kanchanaburi, heading northwest for 65km (40 miles) along Route 3199 until you come to the main entrance of Erawan National Park (daily 8am–4.30pm; charge). There are also buses from Kanchanaburi that drop you at Erawan Village. From there, take a songthaew to the park entrance 2km (1.25 miles) away.

The park’s main attraction is the seven-tiered Erawan Waterfall, named after the three-headed elephant from Hindu mythology. There are lots of stopping points if you can’t make it all the way to the top (a two-hour trek). Remember to take food and water with you. The falls are at their best during and after the rainy season, when water levels are highest and you can swim.

Ready to take your trip to Kanchanaburi with Insight Guides?

Browse our range of suggested itineraries or submit a trip request today; remember the route outlined above can be added to any of our Thailand trips