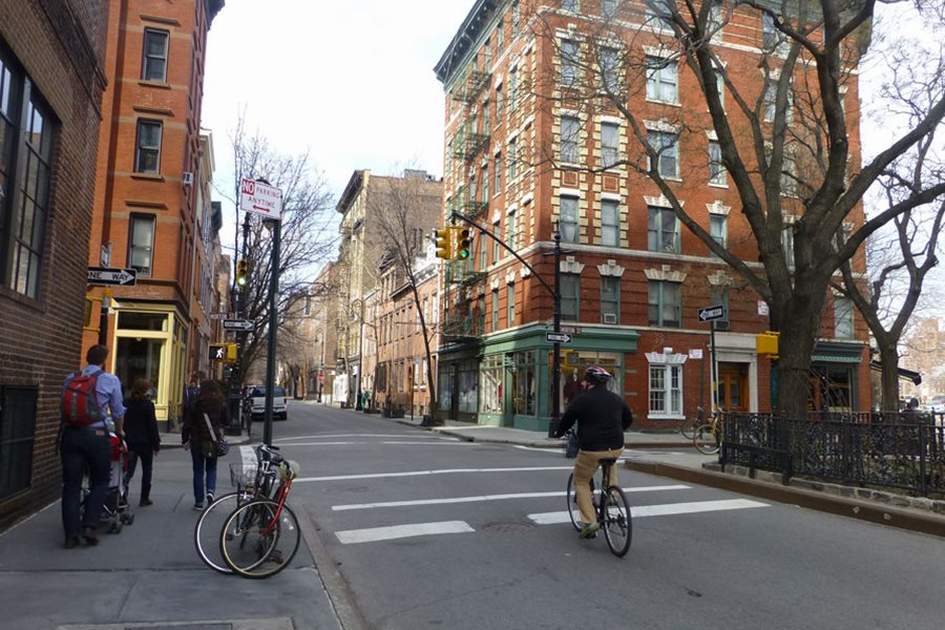 This Spring sees the publication of our brand new Explore guides - a series of books designed to help you make the most of your time away by suggesting routes around your destination's most fascinating areas.

To mark the release of the New York guide, here is our suggested route around the city's Greenwich Village area. You'll find a map at the bottom of the page and café recommendations along the way.

Take in notable sights, shops, bars, and cafés on this route around what was once North America’s foremost bohemian neighborhood, plus a foray into the trendy precincts of the Meatpacking District.

Time: A half- to full day

Start this walking tour near the intersection of Bleecker and MacDougal streets. Caffe Reggio [green map dot 1], is one of the last of the classic cafés where you can sip coffee at a sidewalk table and recall bygone days, when artists, anarchists, and advocates of free love ranging from Edna St Vincent Millay and e. e. cummings to Jackson Pollock, Jack Kerouac, and Bob Dylan made ‘the Village’ the epicenter of New York’s bohemian culture. Alternatively, head west up Bleecker and turn right onto Cordelia Street for cozy Home [green map dot 2].

A colorful history is buried beneath the layers of concrete – at one time it served as a graveyard for the indigent and unknown. In 1888, Mark Twain took a train from Connecticut to meet Robert Louis Stevenson and they sat on the park benches discussing the writerly life, a moment immortalized by artist Francis Luis Mora. On the same benches is where, according to his autobiography, Marlon Brando first got drunk and passed out. A group of concerned citizens including Eleanor Roosevelt, who lived on Washington Square West, successfully campaigned to have car traffic removed from the park.

Nowadays the park serves variously as a town square, performance space, and unofficial campus for New York University, which owns most of the large modern buildings around the edges. Its everyday mix of students, chess hustlers, tourists, and carriage-pushing moms is a showcase of the social contrasts that animate the neighborhood.

On the north side of the park, serving as a gateway to Fifth Avenue, is the Washington Arch [black map dot 2], built in wood in 1892 to commemorate the centennial of George Washington’s presidential inauguration and later replaced by this marble version. North Square [green map dot 3], at the corner of Waverly Place, in the Washington Square Hotel, is a good choice for lunch.

Thankfully, NYU has spared the fine townhouses on Washington Square North, which are about the only 19th-century buildings still facing the park, apart from Judson Memorial Church on the opposite side. The church was designed in Romanesque Revival style by architect Stanford White in the early 1890s and is associated these days with a broad range of progressive issues and events, including a series of theatrical performances, gay lectures, and art exhibits.

Walk about half a block up Fifth Avenue to Washington Mews [black map dot 3] (gates closed at night), a cobbled alley that runs between Fifth and University Place. The pretty little row houses here were originally built as stables for the townhouses on Washington Square North and were later converted to artist studios.

The nearby Salmagundi Club, at 47 Fifth Avenue, is the country’s oldest artists’ club, founded in 1870. Its facilities are for members only, but there are walk-in classes (www.salmagundi.org) should you fancy joining the artistic fraternity for a few hours.

Additionally, the Village is home to some of the world’s most famous jazz clubs. First among equals is the Blue Note (131 West 3rd Street), which presents time-honored greats as well as contemporary acts. Also in the neighborhood, the Village Vanguard (178 Seventh Avenue South) cut its teeth by launching jazz royalty like Miles Davis and John Coltrane.

Back on Fifth Avenue, head west on 8th Street, then north on Sixth Avenue for about a block to the Jefferson Market Library [black map dot 6], a Gothic confection. Built as a courthouse in 1877 and later attached to a women’s prison, this Victorian landmark is now a branch of the New York Public Library. Inmates included activist Angela Davis, Catholic reformer Dorothy Day, and accused spy Ethel Rosenberg. The prison was demolished in the 1970s, and a community garden stands in its place.

If time permits, take a detour up Greenwich Avenue, which has numerous shops and restaurants. If you’re in the mood for a bite, Elephant & Castle [green map dot 4], is found at No. 68, and Rosemary’s [green map dot 5] at the corner of West 10th Street.

Double back on Greenwich Avenue and turn right at Christopher Street. This is the traditional center of New York’s gay community. Although much of the scene has now shifted north of 14th Street, it’s still worth having a stroll around. Between Waverly Place and Seventh Avenue is the Stonewall Inn [black map dot 8] (53 Christopher Street), site of a 1969 riot touched off by gay patrons fed up with being rousted by the police. The event is widely seen as the opening salvo in the gay rights movement. (The original bar was actually next door.)

Just across the street, tiny fenced-in Christopher Park has a statue of Civil War general Philip Sheridan. Sheridan Square itself isn’t a square at all, it’s actually at the triangular junction where Grove, Christopher, and West 4th streets meet.

Follow Christopher across Seventh Avenue South, then turn left at Bedford Street into one of the quiet residential areas that make the Village such a pleasant place to live. The poet Edna St Vincent Millay lived at 75 ½ Bedford Street [black map dot 9], said to be Manhattan’s narrowest house at just over 9ft (3m) wide.

Retrace your steps on Bedford Street, turn left at Grove Street, and continue one block to Hudson Street. Facing the intersection is the blocky, austere mass of St Luke in the Fields [black map dot 10], the city’s third-oldest church, built in 1822.

Farther up Hudson Street, amid a cluster of boutiques, antique shops, and restaurants, is the White Horse Tavern [green map dot 6], a favorite of Welsh poet Dylan Thomas before he collapsed here in 1953 after one too many whiskeys. Dylan later died at nearby St Vincent’s Hospital.

Beyond 11th Street, Hudson Street converges with a six-way intersection around cute and leafy Abingdon Square [black map dot 11]. This route concludes by heading northwest up Hudson Street to the Meatpacking District, where there are some great options for eating. Before making your way there, you could make a detour by turning right on Bleecker Street, where you can stroll around the antique shops and boutiques that line the street all the way to Sixth Avenue.

Look, too, for pricey designer shops like Marc Jacobs (385 Bleecker), Mulberry (387 Bleecker), Ralph Lauren (381 Bleecker), and Juicy Couture (368 Bleecker), which in the last few years have been cropping up on this strip and elbowing out funky, longtime retailers, much to the consternation of locals.

Bleecker is crossed by some of Greenwich Village’s prettiest side streets. Bank Street is particularly lovely, with its cobblestones and pastel houses, as is Perry Street, which is one block farther along.

Northwest of Abingdon Square, the Meatpacking District was formerly a neighborhood of meat wholesalers and commercial butchers that has now become one of the city’s most fashionable areas.

During the day, you can browse high-end designers; there are a number on West 14th Street [black map dot 12] between Ninth and Tenth avenues: Alexander McQueen (No. 417), Jeffrey New York (No. 449), and Diane Van Furstenberg (at the corner of Washington Street). If you’re in need of a break, there’s a clutch of restaurants around the cobbled intersection of Hudson, Gansevoort, and Little West 12th streets where you can stop for dinner or drinks.

It’s a fairly laidback scene, and very different from the glitz of the nighttime hours, when thin, rich, and famous celebrities jam the restaurants and nightclubs, flashbulbs pop, and the hoi polloi gawk from behind velvet ropes.

At the edge of the Meatpacking District, the High Line runs from Gansevoort to 30th Street between 10th and 11th avenues. This is a defunct, elevated freight railroad transformed into New York’s most unusual park. Built in the early 1930s to serve upper-floor loading docks of factories and warehouses, the railroad delivered its last trainload of frozen turkeys in 1980 and was left to molder for 20 years, sprouting a natural garden of wildflowers and weeds. Seeing the potential, a group of friends successfully enlisted the city to save the tracks. The original wild plantings inspired the naturalistic landscaping along a concrete walkway that incorporates parts of the rails and the original metal fencing. It offers seating, and city and Hudson River views from a 30ft (9m) high perspective. There are future plans to extend it further west, as far as the Jacob Javits Center.

Just below the High Line on Washington street, the Standard Grill [green map dot 7], has good food and a great terrace. 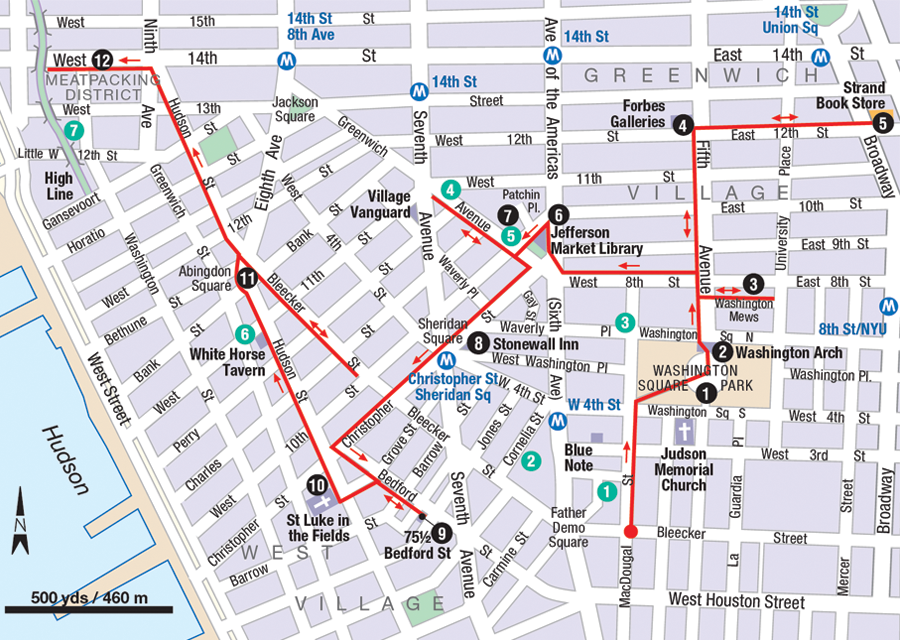 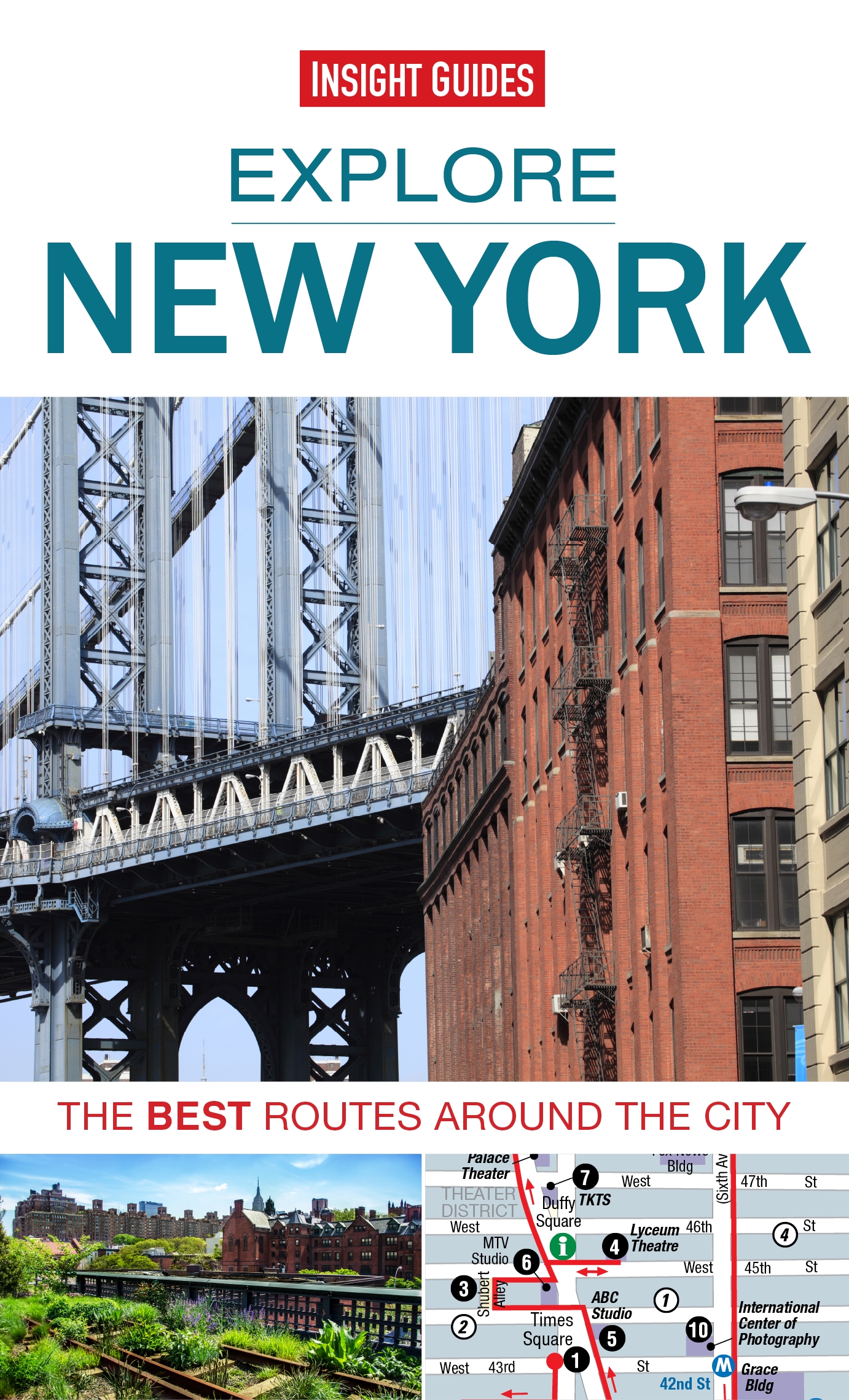 Whether you are new to the Big Apple or a repeat visitor, Explore New York will help you discover the very best of this exciting city - however long your stay. This brand-new, full-colour guide contains 18 easy-to-follow routes that take in the city's best sights. Marvel at the shopping opportunities and impossibly tall buildings with our route along Fifth Avenue and experience fantastic American jazz and soul music with our walk through Harlem. Enjoy some tranquility in the heart of the city with our route around Central Park and hang out at stylish boutiques and cafes with our tour of Soho and Tribeca.

Learn about the history and culture of the city as you go and stop off at our recommended cafes along the way. All routes are plotted on a useful pull-out map and beautiful photography throughout the guide shows off New York's dazzling skyline.

Buy Explore New York as a book or ebook here.