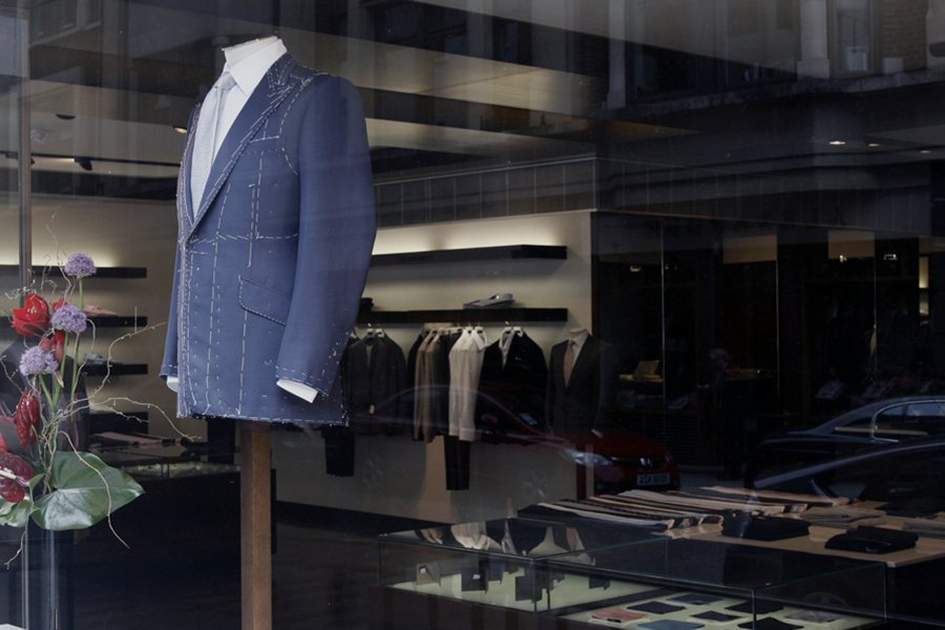 The Japanese word for business suit, sebiro, is said to be a corruption of Savile Row, and this short street is synonymous worldwide with the artistry and craftsmanship of bespoke tailoring. Even the word ‘bespoke’ itself was coined here in the 19th century when a particular bolt of cloth was said to ‘be spoken for’ by a customer for his suit.
The tailors here continue to make by hand what are widely considered the best suits in the world. Savile Row has dressed European aristocracy and royalty, and every icon of male elegance from Nelson to Cary Grant to Jay-Z. A bespoke suit requires four to six fittings, takes five months to complete, and prices start from £3,000 for a two-piece.

While the proud tradition of bespoke continues, there are around half the number of bespoke tailors in the Row than there were in the 1980s. The older established firms of the Row – Henry Poole & Co (15), Dege & Skinner (10), Kilgour (5 and 8), H. Huntsman & Sons (11) – have had to bow to the pressure of modern times and now also sell made-to-measure and even some off-the-peg ranges. And a newer, sharper modern type of tailor has moved in, as have menswear designers and brands as diverse as Lanvin (32) and Evisu (9).

The new generation on the Row is represented by Richard James (29) and Ozwald Boateng (30) who, in their separate ways, have managed to infuse traditional tailoring with new colours and fabrics and ‘sex up’ the image of the Row.

In the big building on the corner of Burlington Gardens is Abercrombie & Fitch, which, although sounding like a fitting resident, with its disco ambience and half-naked beefcake bouncers, actually gives the old craftsmen of the Row a fit of the horrors.

Abercrombie & Fitch have also taken over number 3 as a children’s store, which sits where, in 1967, The Beatles set up ‘Apple Corp’, a briefly psychedelically muraled office, boutique and studio and is the location of the infamous last rooftop performance on a cold 30th January 1969.