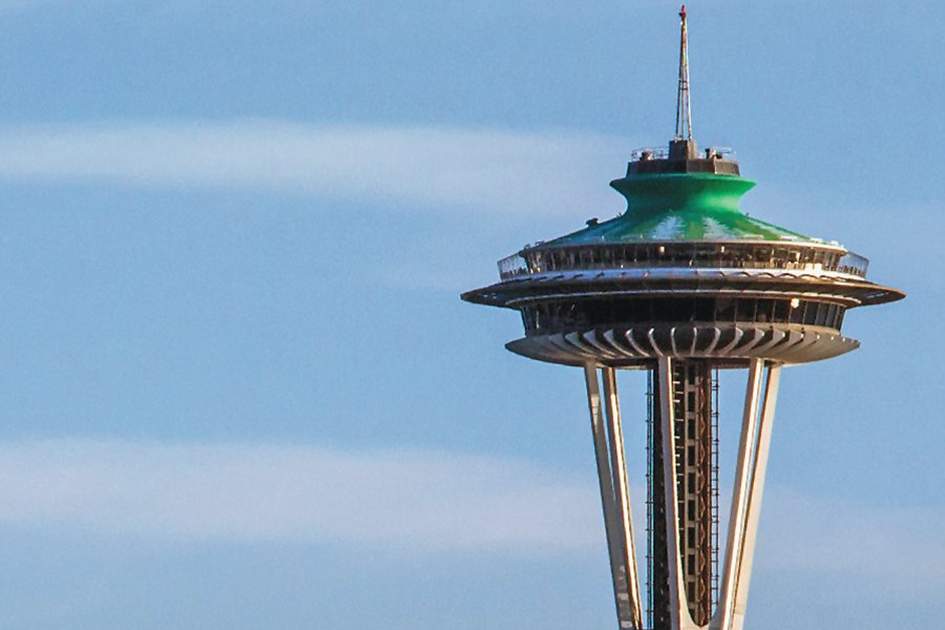 Only one World’s Fair was the setting for an Elvis Presley movie (It Happened at the World’s Fair) and that was the one held in Seattle in 1962. However, most Seattle residents are proudest of the fair’s most tangible legacy: the Space Needle, turning what would otherwise be a rather dull skyline into something instantly recognisable.

Built in 1962, the 605ft (184-meter) Space Needle was a marvel of design and engineering that cost $4.5 million ($40 million today) to erect. The centrepiece of the fair, the flying-saucer shape (an idea, according to local lore, first roughly sketched on a placemat in 1959) was chosen from many designs that had been submitted. In the end it was Edward Carlson, John Graham and Victor Steinbrueck who all collaborated to produce the futuristic icon that towers magestically in the sky to the north of Downtown, connected to the centre by that other charmingly retro feature, the Seattle monorail. 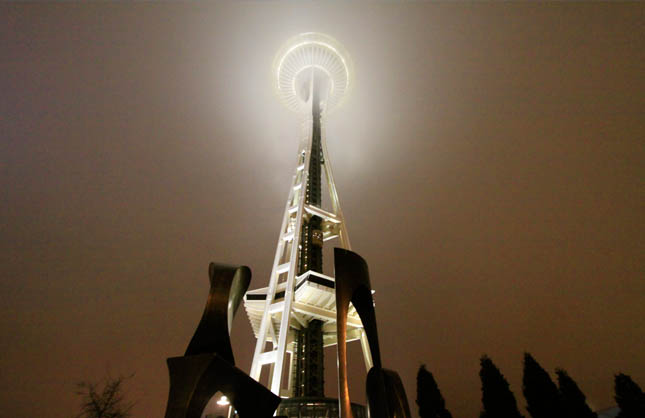 Built upon an old fire department lot, construction was speedy and it was completed in less than a year, but the three elevators that transport visitors from the ground to the Needle’s restaurant and observation deck were last to arrive; the final one got to Seattle just a day before the fair opened. In 1993, two of the elevators were replaced with computerised versions that travel at 10mph; the third, which is mostly used to transport freight, moves at 5mph.  The other option is to take the stairs, all 832 steps of them.

Originally painted in bold colours with wonderfully sci-fi names such as “Orbital Olive,” “Re-entry Red,” and “Galaxy Gold", the tower has undergone a number of colour changes over the years and can often be found wearing the logos of local successful sports teams. 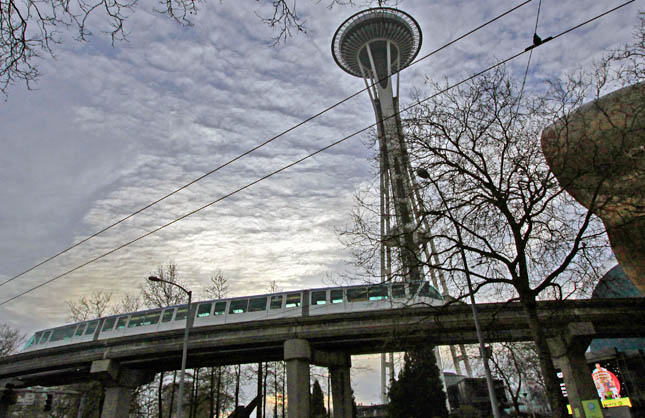 With a restaurant 500ft above ground and an observation deck just above, the Space Needle offers some of the city’s best views: to the east are Lake Union, the immensely larger Lake Washington and the distant Cascade Range; westward, Elliott Bay opens into Puget Sound in front of the Olympic Mountains; and southeast is the snowcapped peak of 14,410ft (4,392-meter) Mount Rainier, 60 miles away. 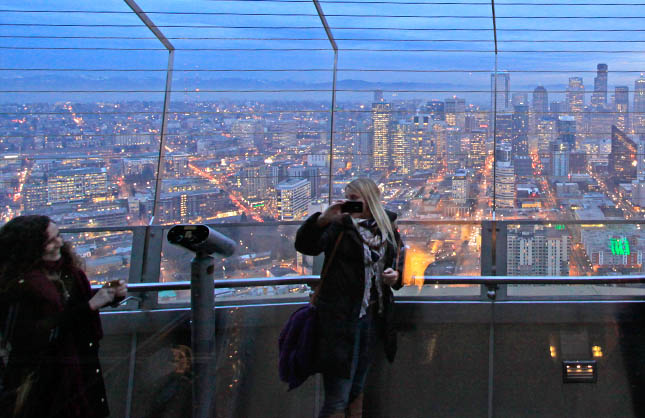 The revolving restaurant, SkyCity, provides a 360-degree view. As diners enjoy tasty – if expensive – northwest cuisine, the restaurant completes a rotation every 47 minutes with the aid of a 1.5 horsepower motor.

As well as appearing in countless films and television programs, the building has now found a slightly more modest fame as a Lego kit, allowing you to bring a little bit of the Pacific northwest to your desk or mantlepiece. When putting it together, consider the strength of the original. The Needle is designed to withstand winds up to 200mph and earthquakes up to 8 on the Richter scale. The building reacts to the elements apparently swaying as much as an inch for every 10 mph of wind, something to note before ascending on a stormy day. One reason may be the tower's low centre of gravity which lies only 5ft from the ground, the concrete foundations themselves decending a further 30ft.

The Space Needle was given Historic Landmark status in 1999 and celebrated its 50th anniversary thirteen years later with a fresh lick of paint.

Find out more in the new updated edition of the Insight City Guide to Seattle now available as an eBook.

Buy direct from us now for an amazing saving

Insight City Guide Seattle is a comprehensive travel guide to this innovative and scenic city.
Full-colour photos and maps throughout combine with authoritative text to inspire you to explore Seattle and its surrounding areas. Be inspired by the 'Best Of Seattle' section, which highlights unmissable sights and experiences, while a comprehensive Travel Tips section gives you all the practical information and travel advice you need to plan what to do on your trip, including selective listings for hotel and restaurants.