Thailand. The mere mention of the country's name conjures up images of limestone islands and tropical beaches. Ever feel like you've seen it before? That's because you probably have... 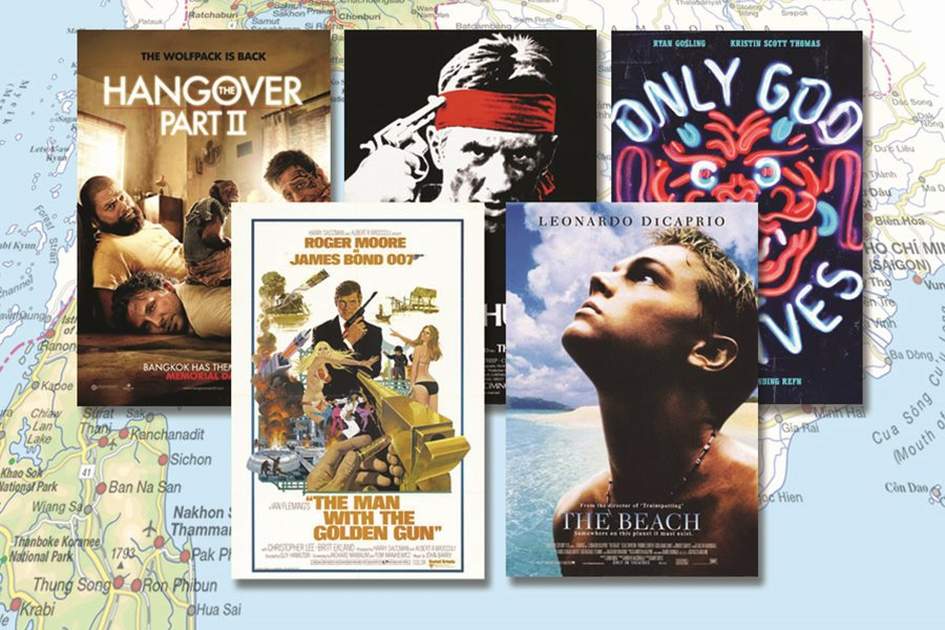 Thailand serves as a great location to film movie scenes, from lush rainforests to idyllic beaches and bustling cities. We’ve asked film critic Scott Jordan Harris to take us on a tour of some of the country’s most memorable film locations, from “the perfect beach” to “James Bond Island” and from Bangkok’s best luxury hotels to “the world’s largest outdoor museum”.

The enormously successful Hangover comedies follow a group of immature men, who call themselves "The Wolfpack", through their increasingly absurd international adventures. The first film is set in Las Vegas, but for the sequel director Todd Phillips took the characters (played by Bradley Cooper and company) far from their native country and far from their comfort zone, transplanting them to Thailand.

Of all the films that have been shot in Thailand, TheHangover Part II has some of the best locations to visit because it features some of the country’s key tourist destinations and most luxurious accommodation. The wedding of Stu (Ed Helms) and Lauren (Jamie Chung), for example, takes place at Ritz Carlton’s Phulay Bay Resort in Krabi, southern Thailand you can explore the Krabi Provence on Insight Guides' Krabi Discovery trip. The “super luxury” hotel advertises itself as “a secluded paradise… in one of the world's most spellbinding destinations” located “beyond the limestone mountains rising from Thailand’s Andaman Sea” among “virgin rainforests, ethereal beaches and crystal clear waterfalls”. A stay there is perhaps reason enough to visit Thailand.

But if you’d like to do more than relax in the opulent surroundings of Phulay Bay, there’s no quicker and more enjoyable way to immerse yourself in Thai culture than with a visit to “the world’s largest outdoor museum”, Muang Borang (aka The Ancient City), which is the site of the “Chinese temple” that the Wolfpack visits in the hope of remembering what happened on the incredible night after which Alan (Zach Galifanakis) woke up with a shaven head and Ed woke up with a large facial tattoo.

The Ancient City is in Samutprakarn, about 45 minutes from Thailand’s capital, Bangkok, and for Hangover Part II fans looking for a hotel in Bangkok, the Lebua is ideal: it offers some staggering views of the city and features prominently in the film. Hardcore Hangover aficionados should be sure to sample a “Hangovertini” at its Sirocco restaurant, which can be seen onscreen several times, and to stay in the spacious three-bedroom “Hangover Suite”. Be warned though: chain-smoking monkeys are not permitted.

If you prefer to do your location-spotting while enjoying a low-budget backpacking holiday instead of a tour of Thailand’s high-end hotels, The Beach is the perfect film to use as your onscreen tour guide. It sees Leonardo DiCaprio arrive as a student traveller in Thailand in search of the perfect beach – and find it in the form of Maya Bay, on the island of Phi Phi Ley near Phuket. A trip to this beach is included on Insight Guides' Krabi Beach Escape trip.

The film became infamous in the area because Thailand’s “perfect beach” was deemed not perfect enough for the production, which planted imported palm trees to “improve” the local scenery. Maya Bay was later victim to the ravages of the 2004 tsunami, but has recovered enough to reclaim its status as one of the world’s best beaches. There are few better places to relax in the sun. Just don’t try to plant your own palm trees.

Although Maya Bay is naturally The Beach’s best-remembered location, fans may also want to visit the stunning waterfall that makes an unforgettable appearance in the film. It is the magnificent Haeo Suwat Falls in Kaho Yai National Park, a few hours outside of Bangkok. Camping is permitted inside the park, which offers nature tours, water-rafting, mountain biking and abseiling, and so it’s easy to complete your backpacking experience with a few nights among Kaho Yai’s hundreds of species of birds, mammals and lizards and thousands of species of plants. 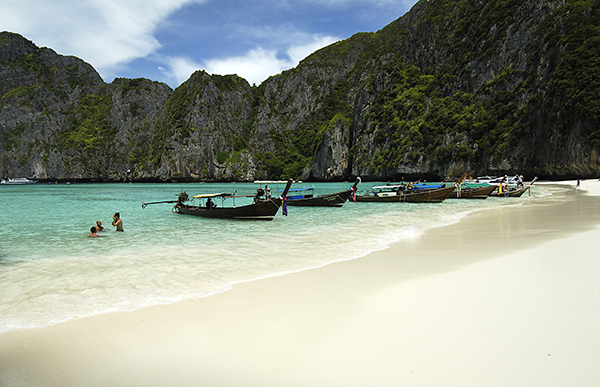 The location of The Beach. Photo: Shutterstock

The Man With The Golden Gun

It’s unsurprising that film’s most famous international playboy brought his brand of espionage to Thailand; James Bond arrived in the country in the form of Roger Moore in the 1974 camp classic The Man With The Golden Gun. In his pursuit of Christopher Lee’s expert assassin, Francisco Scaramanga, 007 visits a location that would later become familiar to the cast of The Hangover: Muang Borang. But while The Hangover Part II uses The Ancient City as a Chinese temple, The Man With The Golden Gun dresses it up as a karate school where Bond fights students in a high-kicking action sequence designed to cash in on the kung fu craze of the 1970s.

The Man With The Golden Gun’s most memorable sequences take place at its most memorable location: Scaramanga’s private island, which is, in reality, Khao Phing Kan. The two islands that make up Khao Phing Kan were relatively unknown to international tourists before appearing in the film but sightseers now flock to them to visit what is quite probably the most beautiful location ever used in a Bond movie. In fact, Khao Phing Kan is now so closely associated with The Man With the Golden Gun that it is more commonly called “James Bond Island”. The best way to reach it is to base yourself in nearby Phuket and book a tour. Visit some of the filming locations on Insight Guides' Southern Thailand Explored trip. 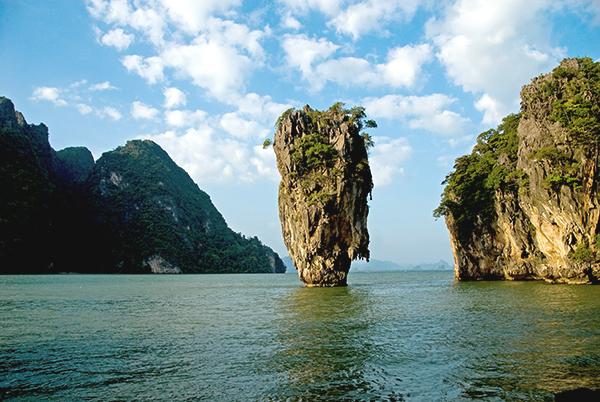 Ryan Gosling and Nicholas Winding Refn followed stylish crime thriller Drive with stylish crime thriller Only God Forgives, in which Gosling plays Julian, a drug smuggler working in Bangkok’s underworld. To give the film its distinctive dark look, Refn principally filmed at night and avoided the immediately recognisable locations used in The Hangover Part II, The Beach and The Man With The Golden Gun.

However, one location that is recognisable, at least for those lucky enough to have seen inside it, is the five-star Emporium Suites hotel on Sukhumvity Road in Khlong Toei. It’s where Kristin Scott Thomas’s character, Crystal, stays and, like Bangkok’s Lebua hotel, it offers gorgeous views of the city from surroundings of “worry-free luxury.” Visit Bangkok's luxury hotels on Insight Guides' Bangkok Culture trip. 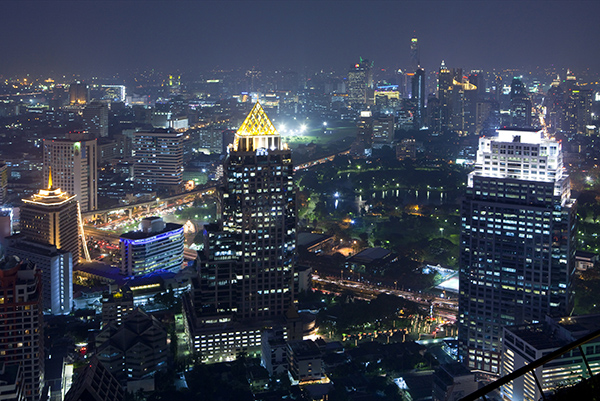 It would be remiss to discuss Thai film locations without mentioning a film set in the Vietnam War. Thailand has frequently doubled for Vietnam on the silver screen, and never more famously than in the 1978 classic The Deer Hunter, which won Best Picture at the Academy Awards. The film’s re-creation of the evacuation of Saigon, for example, was filmed in Bangkok, on Throng Wad Road, and the prison camp scenes in which the characters played by Robert De Niro and Christopher Walken are forced to play Russian roulette were filmed in Western Thailand on and around the Khwae Yai River – which is better known as the River Kwai. If you’d like to spend time on the River Kwai in rather more comfortable conditions, a great option is to book a room at the River Kwai Jungle Rafts Hotel, which literally floats on the famous river.

This river is, of course, also known for the tragic story of The Bridge on the River Kwai, made into a classic film with Alec Guinness in 1957 – but shot in Sri Lanka!

This article was originally published on 9th September, 2013

Taking a holiday to Thailand: how to get started

Insight Guides can help you with planning, organising and booking your trip to Thailand. Simply, get in touch and share your budget, interests and travel style. Our local experts will create an itinerary exclusive to you and your requirements, which you can amend until it's just right. Alternatively, browse and modify ready-made holidays to create your dream trip today.

Our family thanks you so much for organizing such an amazing trip for my son and I, in a short couple of weeks before the holidays. The entire trip was meticulously planned, all with only a few tidbits of information in interests and needs. We had continuous contact and people checking in on our well being and satisfaction with itinerary. Each and every guide and driver along the way were friendly, gracious, knowledgable, kind, well organized and had a great sense of humor! We could not have asked for a better adventure!