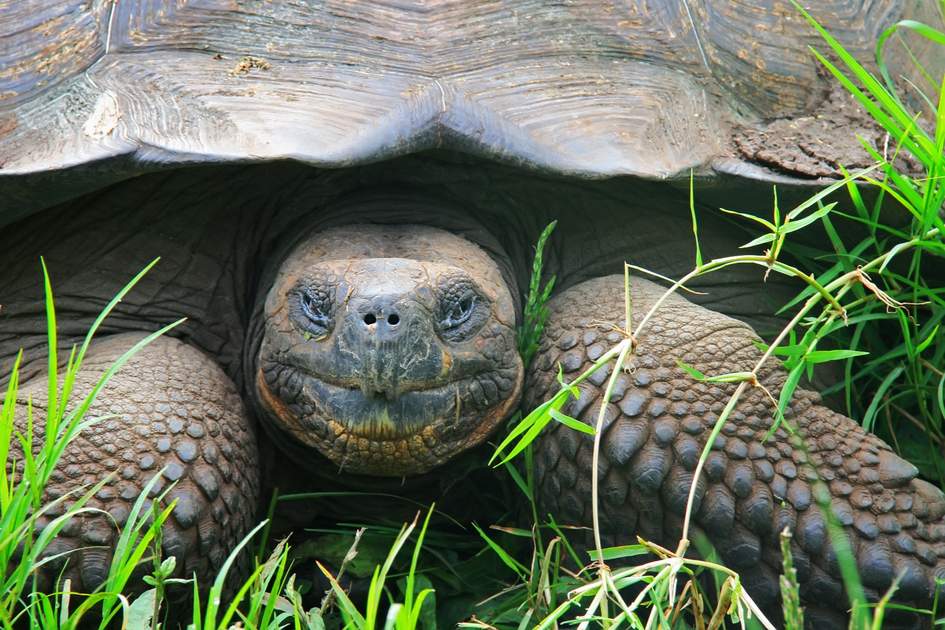 Fifty-eight resident bird species have been recorded here, of which 28 are endemic. Land birds include the famous Darwin finches, mockingbirds, the Galápagos dove, and the endemic Galápagos hawk, but it’s the seabirds that tend to impress visitors. The world’s entire population of 15,000 pairs of yellow-billed, waved albatrosses nest on the single island of Española (Hood). These magnificent creatures are famous for their extraordinary courtship displays, dancing about and “fencing” with their beaks – literally, standing face to face and clicking their beaks together at a great rate.

Blue-footed boobies, although not endemic, are an unforgettable sight, as their feet really are a bold, striking blue. They were named “boobies” after the Spanish word bobo (dunce) by early sailors amazed that the birds did not fly away when approached. The boobies have a somewhat comical courtship ritual: they “dance” toward one another, plodding about with blue feet working up and down, “skypoint” (pushing their wings up to the heavens) and give one another twigs as presents. They are often seen diving into the water from heights of 20 meters (65ft) to catch fish.

Another common seabird is the frigate. They can look quite sinister when hovering overhead, and are not above preying on other birds’ young. The males’ puffed scarlet chest sack makes an impressive sight when they are mating. With only 400 pairs still alive, the Galápagos lava gull is said to be the rarest bird species on earth.

The penguin is a big favourite on the islands, clumsily waddling about on land but speeding like a bullet under the waves. They are the most northerly penguin species, probably first coming up from the south with the icy Humboldt Current. They are mostly found on Isabela and Fernandina, although they can also easily be seen on Bartolomé.

The endemic flightless cormorant also makes an entertaining sight. There are only around 800 pairs in existence on the remote, far coasts of Isabela and Fernandina. With no enemies to fear, it scampers along flapping what look like the shreds of lost wings. It is, however, a good diver and can easily catch the fish it needs for its food.

It was Darwin who called the Galápagos “a paradise for reptiles.” Most common are the endemic black marine iguanas, often found sunning themselves on cliffs and shorelines. These creatures have adapted themselves to the ocean to feed on seaweed, often diving to 12-meter (40ft) depths. They have developed unusual glands connected to their breathing systems that accumulate the excess of salt in their bodies. Every so often the salt is snorted out through the nose; not an attractive sight. While they are usually black, the males change colour during mating to orange, red and blue.

The rarer-to-spot land iguanas are yellow in colour and often larger than their seagoing relatives. Tiny lava lizards can be found on all the Galápagos Islands, frequently seen doing somewhat absurd “push-ups” on pathways, which is a sign that they are marking out their territory against intruders.

The most famous of the Galápagos reptiles is the giant tortoise. This most ancient of reptiles exists only here and on the island of Aldabra in the Indian Ocean. Weighing up to 250kg (550lb), it has two types of shell: the dome-shaped type is found in humid environments such as Santa Cruz, where vegetation is low and abundant; the second type has a shell that resembles a horse’s harness and lives on islands with uneven soil and no low grass, such as Española (Hood).

Saving these magnificent creatures has been a major task of the Charles Darwin Research Station near Puerto Ayora, where a program of breeding has been instrumental in restoring the tortoise population on Española.

Young sea lions are incredibly cute and playful; they will swim about snorkellers and tease them, even staring into your goggles and pretending to charge you before turning away. The machos, or older males, do, however, stake out their territory very jealously. They can turn aggressive and have been known to bite swimmers, so a degree of caution should be used in their presence (guides will know which areas are the preserve of the bull lions).

Fur seals have more hair than sea lions, and are smaller and very shy: they prefer to live in colonies, on distant cliffs. Bottle-nosed dolphins are often seen surfing the bow spray of boats.

Under the waves, snorkellers will be constantly surrounded by many of the 541 (79 endemic) species of fish, and more are being discovered every year. Schools of brightly coloured tropical fish pass over the sea floor and around rocks, making a spellbinding sight.

Hammerhead and white-tipped Galápagos sharks can also be seen in the waters around the islands and the grace of these creatures is particularly impressive. They are not dangerous, but attacks by non-native sharks have been known in recent years.

Keep an eye out for the different types of rays that glide majestically along the ocean floor. The giant manta ray can sometimes be spotted leaping out of the sea and landing with a loud slap on the waves. None of the rays are dangerous except for the stingray – on some beaches they lie in shallow water beneath a layer of sand, and can give quite a sting if trodden on.

Invertebrates such as jellyfish, sponges, mollusks, and crabs, proliferate. The most commonly seen of these is the bright yellow and orange Sally Lightfoot crab, which can be found on almost every rock in the Galápagos.

Book it: Completely Galapagos
Read more: In depth: Life and Lore in the Sierra
Buy a book: Insight Guide Ecuador and the Galápagos