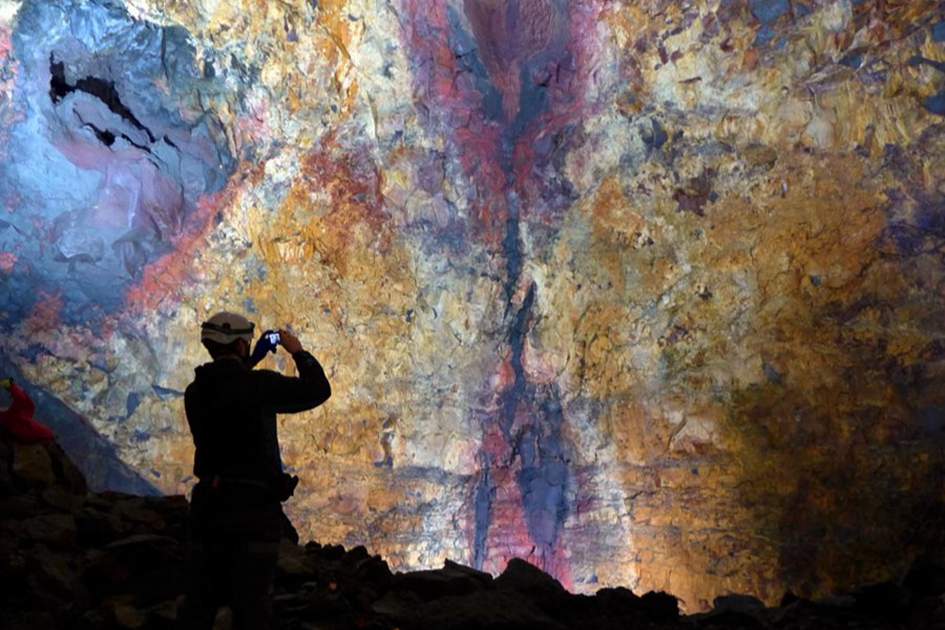 Our cartographer, James, describes his experiences exploring a magma chamber while visiting the new "Inside the Volcano" experience in the þríhnúkagígur volcano, south of Reykjavík, Iceland.

Adding new sights to maps is something I do every day, but adding the “Inside the Volcano” attraction to the next edition of Insight Guide to Iceland reminded me of when I was five and my father took us to Iceland to explore a 4,000-year dormant volcano.

Within 24 hours of having this moment of nostalgic wonder, tickets had been booked to go again, and three ex-geography student friends of mine had been press-ganged into a field trip (my wife declined: "Lowered into a volcano? I'm not a sacrifice!")

See our top volcano hotspots around the world...

From our apartment in central Reykjavik, our team was collected along with eight other adventurers from around the world. We were minibused out to a stretch of road beside an out-of-season ski resort, a location made dramatically desolate by the black scree of the bare slopes.

It was here we were to begin a 50-minute, 5-km hike to the foot of the þríhnúkagígur (Three Peaks Crater) volcano.
We had been warned that the hike was by no means a walk in the park, and that their recommendation of good hiking boots should be observed – it's mostly flat, but the loose rock and mud calls for good footwear. It's also difficult to concentrate on your feet when you are passing across such awe-inspiring terrain!

Stopping now and again, our guide pointed out the key geological elements and started to touch on the relationship the Icelandic people have with nature.

A highlight of the trek is the crossing of a crevasse, one of the expanding cracks separating the Eurasian and North American tectonic plates. This is clearly blockbuster geology. 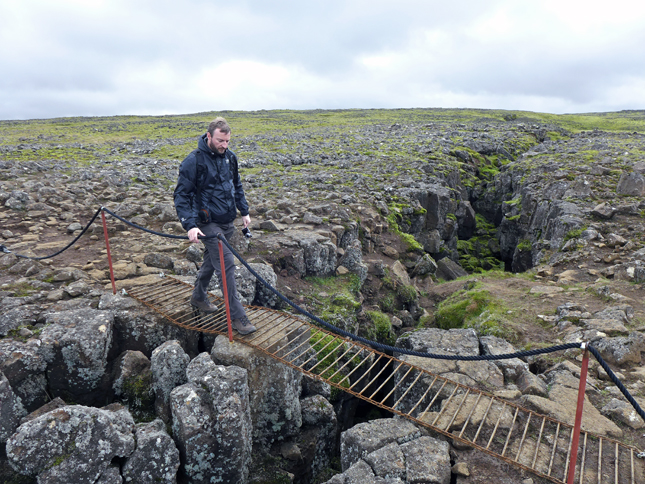 Quicker than expected, we reached the basecamp – a heated and welcoming portacabin hidden beneath the now inescapable þríhnúkagígur peak.

We donned hard hats and safety harnesses, and were divided into groups of four to climb the last few hundred feet to the summit of the volcano. At the top was a view out across the desolate wilderness to Reykjavík in the far distance.

You descend into the volcano in what is basically a window-cleaner’s basket. This was the moment I was not looking forward to – despite being ok with heights, I was still unnerved in the days prior to the event. 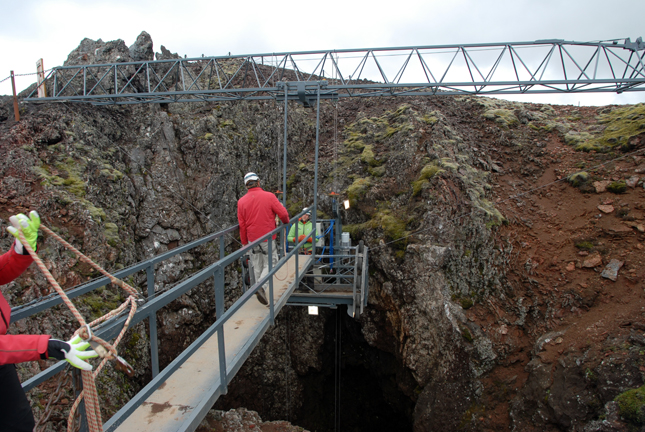 We were hooked onto a safety line, and then we crossed a gangplank to the basket, climbing tentatively in.

"We have two speeds," our magnificently bearded guide informed us, "fast and slow. But we'll go fast so that you'll get more time inside."

With a shudder and lurch, we dropped past the rocks and into darkness. A slight kink in the chamber meant the wheels on the side of the cart made contact with the walls – we grasped the metal basket tighter.

But within seconds, concern made way to wonder as the rocks beside us moved away to reveal a genuinely breathtaking range of colours, textures and patterns.

A few minutes later we made a light touch down and set foot onto the rock and rubble below. It's a very different experience to that of árni B. Stefánsson who first explored this site using only ropes in 1974. 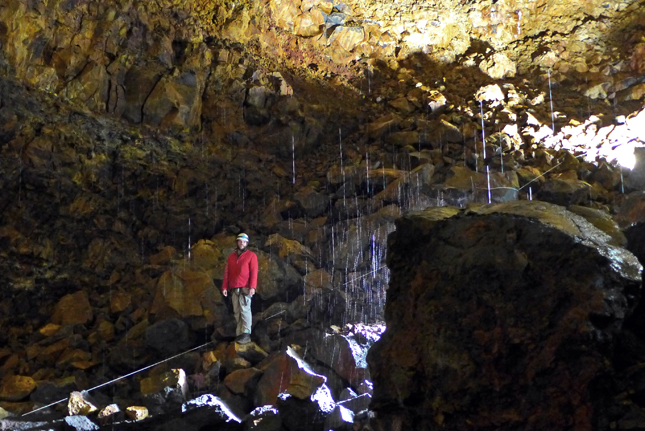 The chamber is enormous – the Statue of Liberty can fit within it with space to spare. Four floodlights sit on the floor illuminating the cavern with just enough to see the detail and yet allow some mystery.

Our guide took some time to explain the structure of the space, the differences in the mineral structure, and the 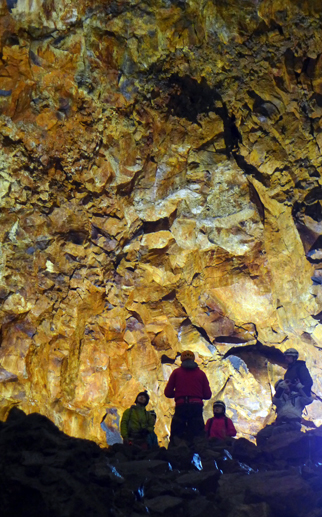 routes the lava had taken to reach the surface. The existence of the chamber is still a mystery – it should be filled in by cooled magma.

It's clear to see why excited geologists were the main visitors in the first year (and Tom Cruise apparently), but this year has seen the profile of the visitors broaden.

The "danger" areas were pointed out, including the entrance to a long and deep cavern, which we were politely advised to keep away from. Then we were able to explore...

The floor of the chamber is filled with rocks, so getting around required some work as the rocks are unstable and the drops behind can be daunting.

Water falls to the floor from an unseen part of the ceiling hundreds of feet up, and droplets could be followed for ages as they shone and reflected in the floodlights before hitting the rocks below.

The temperatures and pressures this place has witnessed seemed almost impossible to fathom.

After 25 minutes of so, we were called back to the basket and slowly began the reverse journey to daylight. As the lift made its slow and steady progress upward we could see some wonderful patterns in the walls, hidden from the depths of the chamber.

As we approached the surface the first signs of life appeared in the moss that covers everything for miles around. 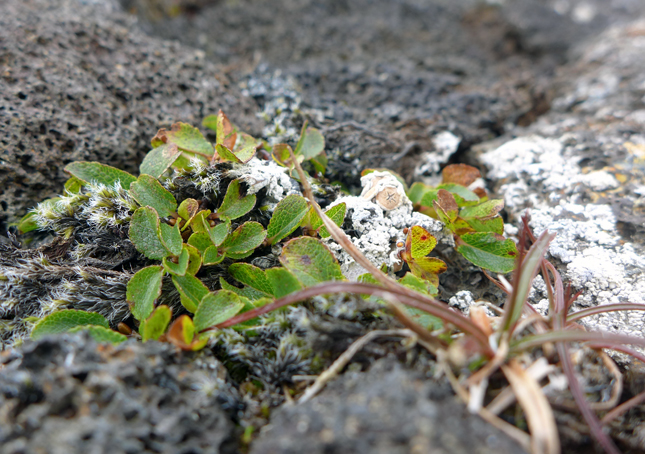 Once out (and after another few moments gazing across to the capital), it was back down to the basecamp where the lamb or vegetable soup was just about the most perfect snack.

Later we took a look at a secondary vent, the origins of which were pointed out in the chamber.

We were also lucky to see a semi-tame arctic fox cub – one of the most adorable things you could ever see!

On the return hike we focussed on smaller details: the  flowers, grasses and a distant falcon's call, finally identified as a merlin, working its way across the basalt fields. Beautiful.

We made good time, which allowed the bonus exploration of a lava tube, partially collapsed but still clearly part of an enormous ongoing network, the edges smoothly finished and the ceiling dripping in small, stunted stalactites. 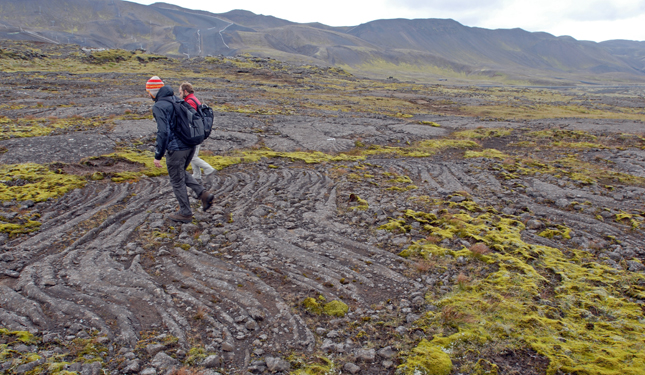 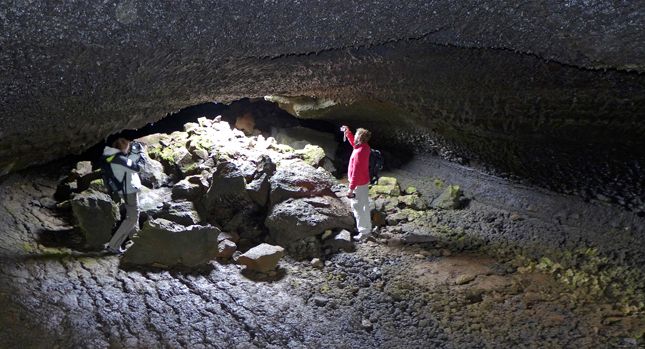 There are plans afoot to enable to chamber to be visited by greater numbers by the creation of a tunnel into the chamber. This is a contentious plan that is strongly opposed by many who see it as destructive – Icelanders are rightly proud of their land. As strong as an argument is for allowing easier access for those unable to make the trek or maneouvre inside the chamber, it is true that the feeling of adventure would be lost.

If you are able to experience this, then go. It's simply wonderful.

In keeping with the vagaries of nature, the opening dates for Inside the Volcano depend upon the severity of the winter and spring seasons, but in 2014 they hope to open from early May through until early September.

There are four to five tours a day but all are dependent upon the weather – the day we visited was calm, but up on the exposed summit the wind speeds were high enough to struggle against.

To enter the volcano you need to be able to cover the trek and be comfortable with the rocky chamber. Children are able to take part but only if they are over 12 years old.

Collection from hotels in Reykjavík is included in the ticket prices, as is stew and refreshments. 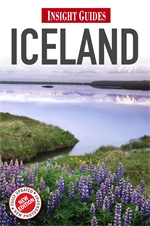 From visiting the Blue Lagoon to outlandish Icelandic cuisine to seeing the Aurora Borealis, read more articles about Iceland...

Or take a look at our travel guides to Iceland...

Many thanks for all your hard work. We absolutely loved our trip to Iceland.

Thank you for all the arrangements made by you to facilitate our visit. The accommodation was good, comfortable and well located. The landscapes and drives were breath taking. I cannot say which was the best, they were all equally awesome...my husband and my family joins me in extending our appreciation to Rick for the wonderful day he gave us at Landmannalaugar.