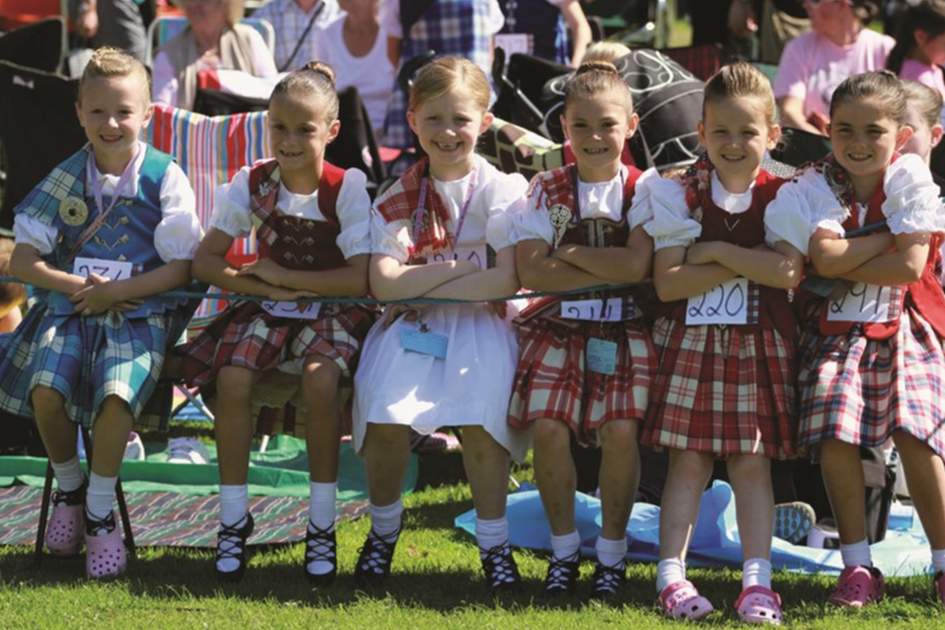 Children preparing to dance at the Highland Games

Highland Gatherings, sometimes described as “Oatmeal Olympics”, make for a fantastic day out in Scotland. Many of the games across Scotland take place in August, so why not limber up and join in with the fun?

The Highlands of Scotland are famous for their games. Some claim that games were first held in 1314 at Ceres in Fife, when the Scottish bowmen returned victorious from Bannockburn. Others believe that it all began even earlier when King Malcolm organised a race up a hill called Craig Choinnich. The winner received a baldric (warrior’s belt) and became Malcolm’s foot-messenger. A race up and down Craig Choinnich became a feature of the Braemar Gathering, which is the highlight of the circuit. However, this isn’t so much because of the calibre of the competition but because, since the time of Queen Victoria, it is often attended by the royal family.

Highland Games are very much in vogue, and new venues are constantly announced. Currently, more than 90 gatherings are held during the season, which extends from May until mid-September. In spite of the spectacular appeal of the great gatherings (Braemar, Cowal, Oban), you might find the smaller meetings (Ceres, Uist in the Hebrides) more enjoyable. These have an authentic ambience, and competitors in the heavy events are certain to be good and true Scots and not professionals from foreign parts. And you may not even have to pay admission.

One of the original aims of the games was to select the ablest bodyguards for the king or chieftain, and this is perpetuated in today’s heavy events. The objects used have evolved from what would be found in any rural community, such as a blacksmith’s hammer or even a stone in the river bed. 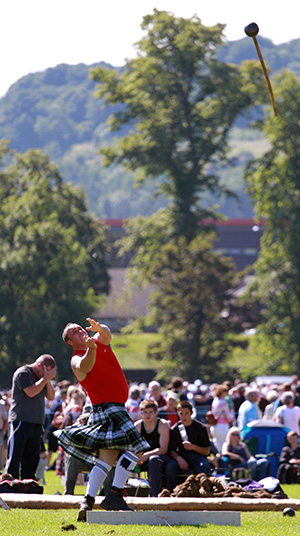 Hurling the hammer and putting the shot are similar, yet different, to those events as practised at the Olympics. At the “Oatmeal Olympics” the hammer has a wooden shaft rather than a chain; the “shot”, a 56lb (25kg) weight on the end of a short chain, is thrown with one hand; the length of weight and chain must not exceed 18ins (45cm). In this event it is not distance but height that counts. The competitor stands below and immediately in front of a bar with his back to it. Holding the weight in one hand, he swings it between his legs and throws it up and, with luck, over the bar. A correct throw will just miss the thrower on its way down, while a bad throw is liable to cause untold mischief.

The most spectacular event is tossing the caber, a straight, tapered pine-tree trunk shorn of its branches. It weighs about 125lbs (57kg) and is about 19ft (6 metres) long. The diameter at one end is about 9ins (23cm) and at the other about 5ins (13cm). Two men struggle to carry the caber to a squatting competitor. They place it vertically with the narrow end in his cupped hands. The competitor gingerly rises and, with the foot of the caber resting against his shoulder, and the remainder towering above, starts to run. Finally, at a suitably auspicious moment, the competitor stops, lets out an almighty roar, and thrusts his hands upwards. The wide end of the caber hits the ground; now is the moment of truth: will the quivering pole tumble backwards towards the hopeful competitor or will it stand up, turn over and fall away?

Everywhere the sound of pipes can be heard. The solo pipers are undoubtedly the aristocrats of the games, and the biggest prize is awarded to the pibroch winner. There are three competitions for solo pipers: pibrochs (classical melodies composed in honour of birthdays, weddings and the like), marches (military music); and strathspeys and reels (dance music). While playing a pibroch the piper marches slowly to and fro, not so much in time to the music, but in sympathy with the melody. When playing dance music, the pipers remain in one position tapping their foot, and, understandably, when playing a march, they stride up and down.

King Malcolm Canmore is credited with being responsible for one of the more famous dances seen at the games. In 1054 he slew one of King Macbeth’s chieftains and, crossing his own sword and that of the vanquished chieftain, performed a Gille Calum (sword dance) before going into battle. The touching of either sword with the feet was an unfavourable omen.

The origin of the Highland Fling is curious. A grandfather was playing the pipes on the moors and his young grandson was dancing to them. Two courting stags were silhouetted against the horizon. The grandfather asked the lad: “Can ye nae raise yer hands like the horns of yon stags?” And so originated the Highland Fling. The dance is performed on one spot, because the Scot, like the stag, does not run after his women, he expects them to come to him. Another explanation is that it was originally danced on a shield. 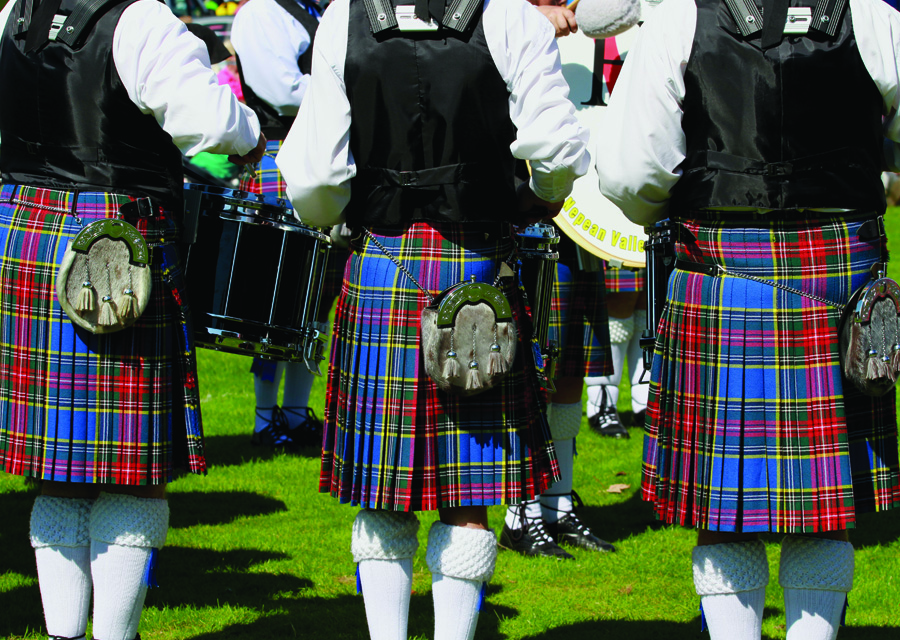 Colour is the keynote of the games. All dancers and musicians are dressed in full Highland regalia, as are many of the judges and some spectators. Competitors in the heavy events all wear the kilt. The reds of the Stuarts, the greens of the Gordons and the blues of the Andersons all mingle with the green of the grass and the purple of the heather to produce a muted palette.

Text taken from the forthcoming new edition of Insight Guide: Scotland, due to be published in spring 2014.