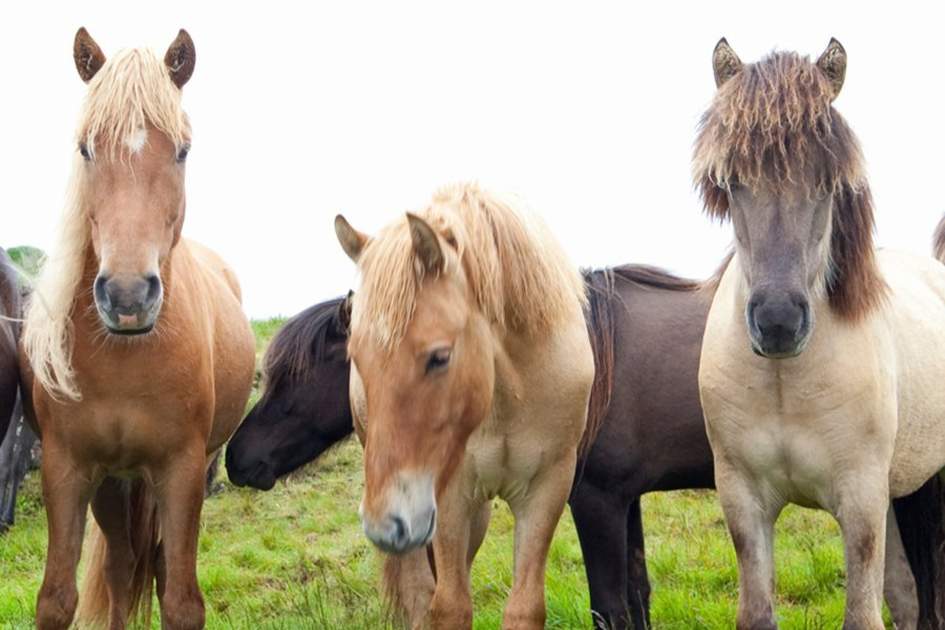 One of the incidental advantages of Iceland’s near total isolation over the centuries is that the Icelandic horse has survived almost unchanged for over 1,000 years.

The Icelandic horse, the stocky breed introduced by the first Nordic settlers, is today protected by strict regulations which forbid the import of horses into Iceland, and which state that an Icelandic horse sent out of the country can never return to Iceland, for fear of importing diseases to which the local breed would have no immunity.

The most useful servant

“Elegant” is not an adjective which springs to mind to describe the Icelandic horse. These chunky, thick-set, muscular animals bear little resemblance to their leggier European relatives, though they can put on a fine turn of speed. They have adapted to the cool climate by growing a thick, shaggy overcoat for winter, which is shed in the spring. In summer, their coats can be groomed to shining smoothness.

In spite of their relatively small stature (13 hands on average), Icelandic horses are famed for their strength and stamina. They have played a vital role in Iceland’s history, for centuries a roadless, bridgeless land. Known affectionately as þarfasti þjónninn (“most useful servant”), the horse was the sole form of overland transport in Iceland until the arrival of the first car in 1904. Even today, the horse has a vital role during the autumn round-up, when sheep are herded from remote mountainsides.

Surefooted, intelligent, affectionate, home-loving and sometimes headstrong, the horse is also known for its five gaits. In addition to the conventional walk, trot and canter/gallop, it has two additional steps in its repertoire: the tölt or running walk, and the skeið or pace. Some can’t manage the skeið; these are known as four-gaiters. The tölt, almost unknown in other breeds of horse, is a smooth run, which (unlike the trot) does not shake the rider about in the saddle and is understandably very popular for long-distance overland travel.

However, horses are not just important as a working animal; horse-riding is now Iceland’s number-one leisure activity. Riding clubs flourish all over the country, and various competitions, races, shows and meets are held throughout the summer months. Iceland’s equine population numbers in the region of 80,000. Horse breeding and trading, up till now on a fairly modest scale, is becoming an important business.

Nineteen national organisations in Europe, North America and New Zealand are affiliated to the International Federation of Icelandic Horse Associations (FEIF), and international Iceland-horse championships are held annually. Iceland always sends a team of horses and riders to the world championships, and invariably carries off many of the prizes – although, frustratingly, the top local-bred Icelandic horses can never be sent to the international contests: since horses taken overseas are not re-admitted, no devoted rider would think of taking their best horse to compete in Europe only to leave it behind.

For more about Iceland's flora and fauna, check out one of our beautifully illustrated travel guides.

I must tell you that my tour with you is probably THE best tour I've ever taken (and I've taken a lot). My guide Rico set a bar so high that I don’t know if any other tour guide will ever measure up :) I can't say enough great things about him, or about... Read more