Coddle and drisheen: what to eat in Ireland 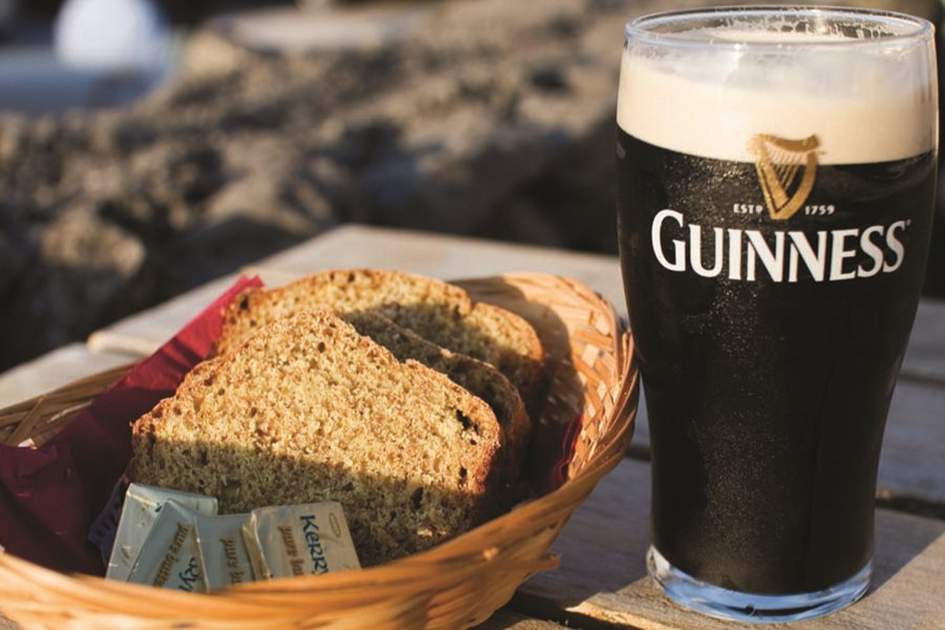 Exploring Ireland will give you quite an appetite, so what can you look forward to eating on your trip to the Emerald Isle? Despite the recent cycle of economic boom and bust, Ireland remains an agricultural country that produces far more food than it can eat. Its green, fertile land and temperate climate ensure an abundance of fresh ingredients and superb meat and dairy produce.

Traditionally, Irish food was plain but hearty. Bread and potatoes accompanied the main meal – a meat stew if you were lucky, or fish on Fridays. Vegetables were boiled to a pulp and salads were a rare summer treat. Garlic, avocados and aubergines were unheard of in most homes. However, in one generation Irish cooking has changed beyond all recognition. There is a new awareness of the excellent raw materials available to chefs in the form of grass-fed beef and lamb, fresh seafood from the Atlantic, abundant dairy produce and home-grown vegetables and salads. Even the humble Irish soda bread, made without yeast or other additives, and once considered inferior to shop-bought white bread, has come to be valued for its unadulterated wholesomeness.

The same holds true for Northern Ireland, where the chefs are if anything even more innovative than in the south. There are minor differences in the two cuisines – for example, at breakfast in Northern Ireland you will probably get a potato farl (fried potato bread) with your Ulster Fry, while down south, there’ll be white pudding with the Full Irish, as it’s known (bacon, eggs, sausages, black pudding, fried tomato and sometimes mushrooms). 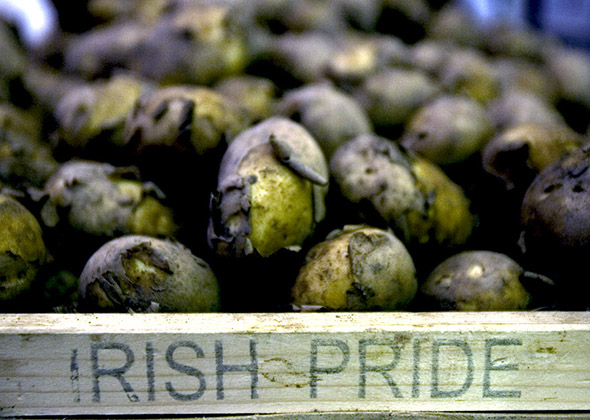 Traditional Irish dishes usually include some form of potato, while most main courses are served with at least one kind of spud, and sometimes three – for example, mashed, roast and dauphinoise. Cabbage with bacon remains a firm favourite, and is usually served with unpeeled potatoes on a side dish, their skins bursting open. Another favourite is Irish stew – onions, potato, carrots and lamb, boiled together, seasoned with salt and pepper and parsley. Dublin coddle – ham, sausage, potato and onion cooked on the stove top in a broth – is a great comfort food. In Cork, tripe and drisheen (cows’ intestines and blood pudding) is a traditional dish, and one stall at the entrance to the famous market on Princes Street sells nothing else. Pig’s trotters (feet) are popular in both Cork and Dublin; both dishes are on the menu at Cork’s Farmgate Café.

The Irish are also great cake makers: try a slice of tea brack (a light fruit cake in which the fruit has been soaked overnight in tea), or a slice of traditional fruit cake – still one of the most popular options on Irish Rail’s tea trolley. 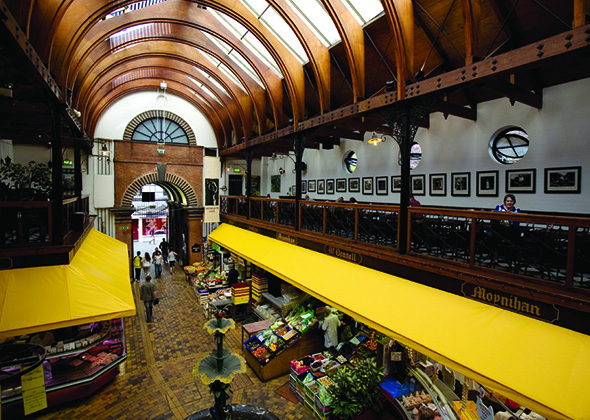 Ireland’s high-quality produce is imaginatively prepared by today’s chefs to emphasise its freshness, flavour and texture. Ireland’s chefs work closely with artisan food producers, who use traditional methods to smoke fish and make charcuterie and farmhouse cheeses. Besides excellent smoked salmon, you will also encounter smoked trout, mackerel and eel. Many restaurants grow their own salads and herbs, or have an arrangement with a local grower. When people eat out, they have come to expect a high standard of cuisine, whether at an expensive restaurant or at the local café.

Irish chefs are trained in the classic tradition, and most go abroad for a few years and bring back culinary influences from their travels – generally Mediterranean, but sometimes eastern – adapting them to the Irish market. This eclectic approach is also followed by Ireland’s private cookery schools, of which by far the best known is Ballymaloe Cookery School near the famous country-house hotel in County Cork. Darina Allen, its director, has been preaching the doctrine of using fresh local produce, treated with simplicity and respect, since 1983, and has trained many of today’s Irish chefs. Her mother-in-law, Myrtle Allen, who started advocating this philosophy back in the 1960s at her restaurant in Ballymaloe House, is active alongside Darina in the highly successful Irish Slow Food movement.

All meat in Ireland is now traceable back to the farm, and the flavour of locally reared and butchered meat comes as a pleasant surprise. The Irish Food Board runs a programme, Féile Bia, encouraging restaurants to source as much of their food as possible from local suppliers, and to pass on the information about its provenance to their customers. ‘Bia’ is the Irish word for food, and ‘féile’ means both festival and celebration. If you see these words on the menu, it means that the restaurant is committed to serving carefully sourced fresh local produce. This reliance on Irish suppliers of meat means that restaurant menus will change according to the season. There will often be game in the autumn and winter, including venison, pheasant, duck and woodcock. New season spring lamb is eagerly awaited, especially in Connemara and Kerry, and is usually on the menu by Easter. 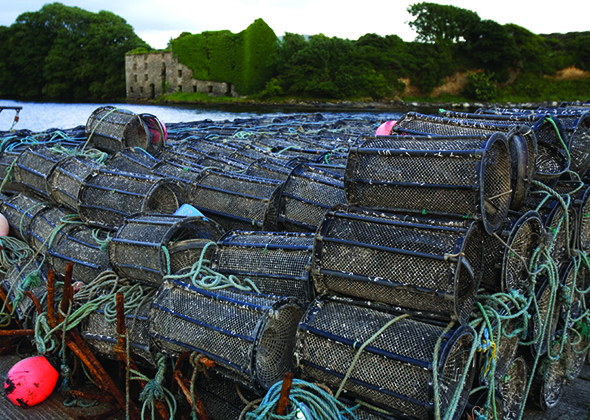 Irish fish comes straight from the Atlantic, and in places such as Kinsale, Dingle and Galway, which have their own fishing fleet, most restaurants buy direct from the boat. The difference is remarkable. Be sure to sample a fresh crab open sandwich, lobster, brill, john dory, tuna and monkfish in summer, and oysters and mussels from September to April (although they are sold all year round, this is the traditional season).

Irish restaurants have also increasingly turned their attention to the quality of their bread, which is usually served with butter on the side. Most places now either bake their own or buy it in from an artisan baker. 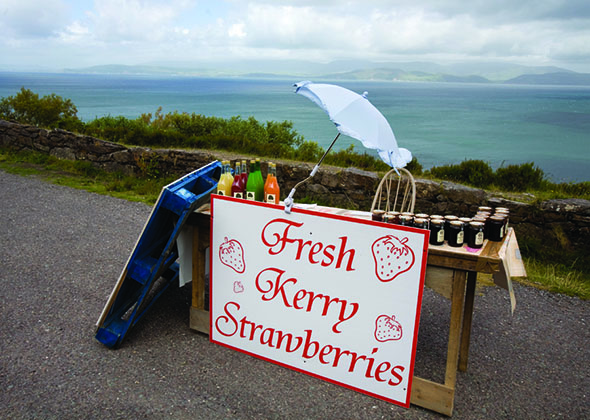 - McNean House and Restaurant, Blacklion, Co. Cavan. A successful TV series and cookbook have not distracted young Neven Maguire from his main job as chef in his family’s business. Worth the detour.