Corona Virus important information
It's not over yet, Mallorca | Insight Guides Blog

It's not over yet, Mallorca 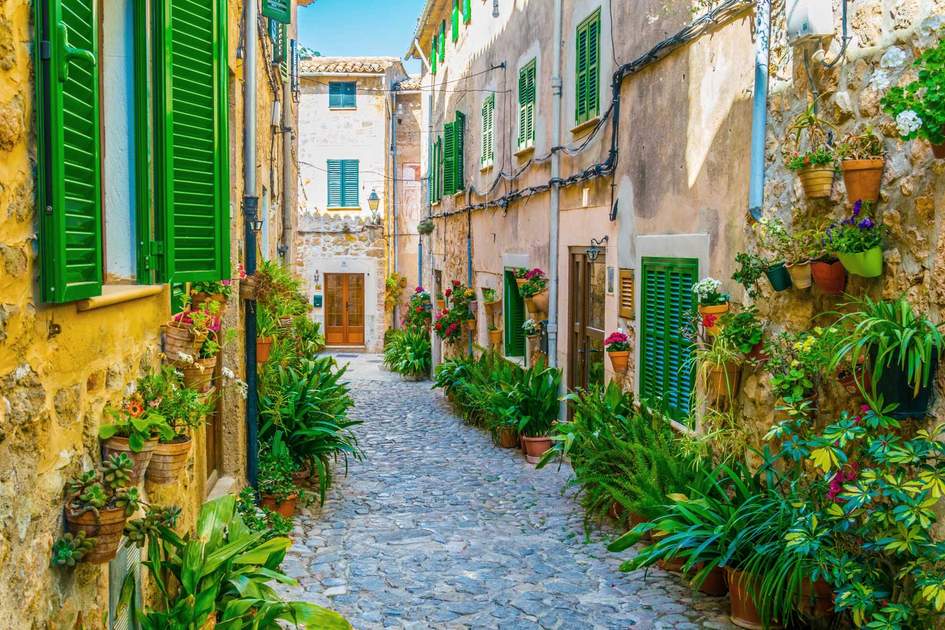 View of a narrow street in the spanish town Valldemossa at Mallorca. Photo: trabantos/Shutterstock

If you are still searching for the last rays of summer sun in Europe and can survive the stags and hens that haunt the flight path then Mallorca is the destination for you.

With over 550km of coastline, nightlife that could rival its little sister Ibiza, a staggering mountain range and stunning villages nestled in to it; the largest of the four Balearics is more than alluring.

Even though it passed through the hands of the Carthaginians and the Romans, Mallorca owes its beautiful terraces, water system still used today, architecture and advancements in cuisine, culture and language to the arrival of the Moors in 902. Under the reign of the Aragonese King Jaume II the island entered a ‘golden age’. Handsome villages sprang up in rural areas and money was poured in to gentrifying the important towns and cities.

Today you can see a blend of Moorish and Modernista (Catalan Art Nouveau) architecture – coloured hydraulic tiles made famous by Huguet and the stained glass and whimsical wrought iron of the Belle Epoque.

Whether it’s a mad dash for the last weekend of sun or you have 2 weeks of holiday still up your sleeve, side step Magaluf and spend a day in Deià. 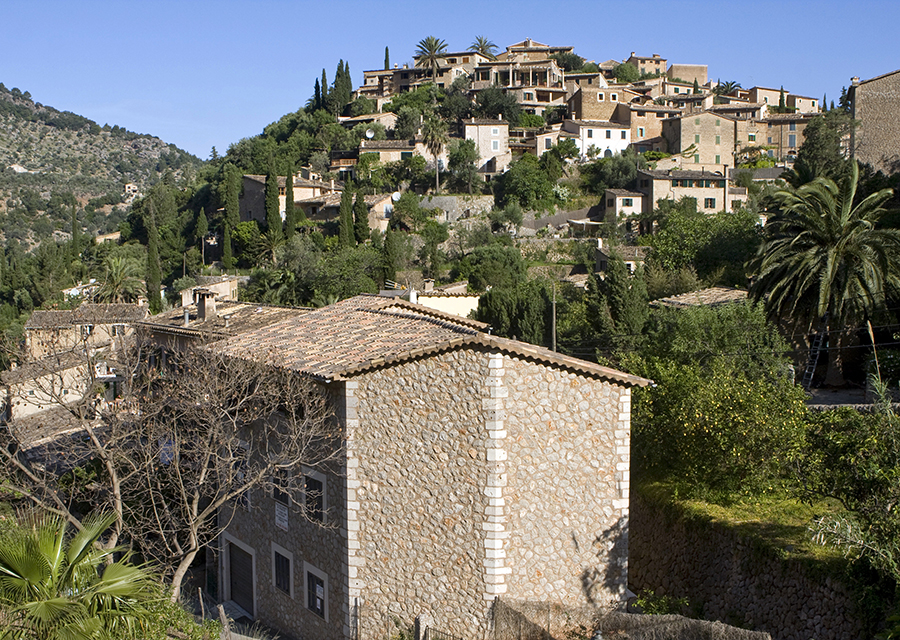 First port of call (excuse the pun) is Deià and the Port de Valldemossa. Still buzzing in late September despite its size due to its beauty and popularity amongst the glitterati (Michael Douglas and Catherine Zeta Jones, Andrew Lloyd Webber and Pierce Brosnan all have houses in the vicinity).

The drive to Deià is not for the faint hearted; this steep drive with hairpin bends is not where you want to meet a tour bus, that’s for sure. A large part of the traffic is made up of keen cyclists enjoying the endless sea views to one side and groves of ancient warped olive trees (reminiscent of J.K Rowling’s whomping willow) to the other. 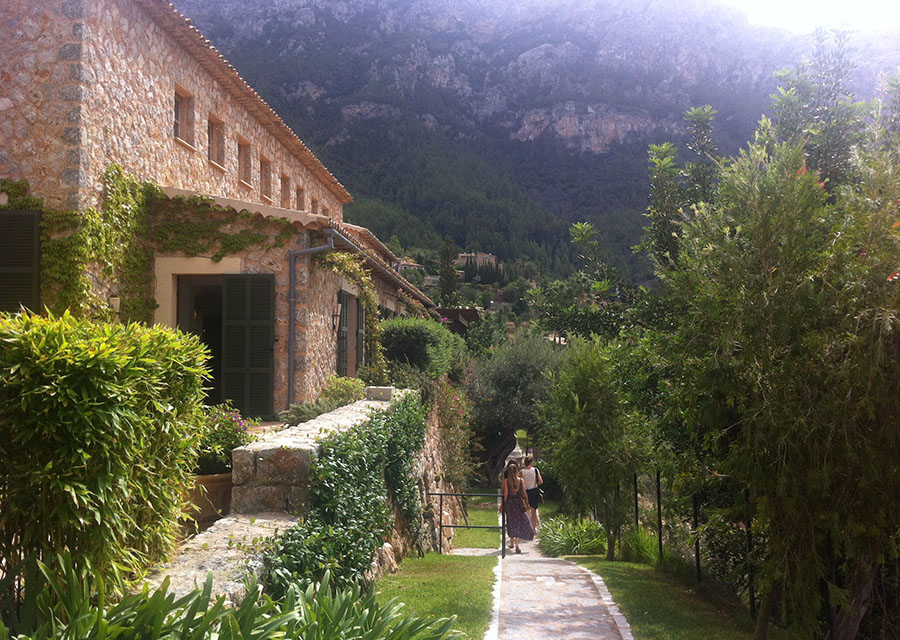 Spectacular views aside, this beautiful honey-coloured stone village’s claim to fame is that it is the final resting place of Mallorca’s most famous adopted son, Robert Graves – English poet and novelist, author of I, Claudius. Graves attracted a melting pot of artists, writers and actors of his time from Anais Nin to Gabriel García Márquez and Ava Gardner. 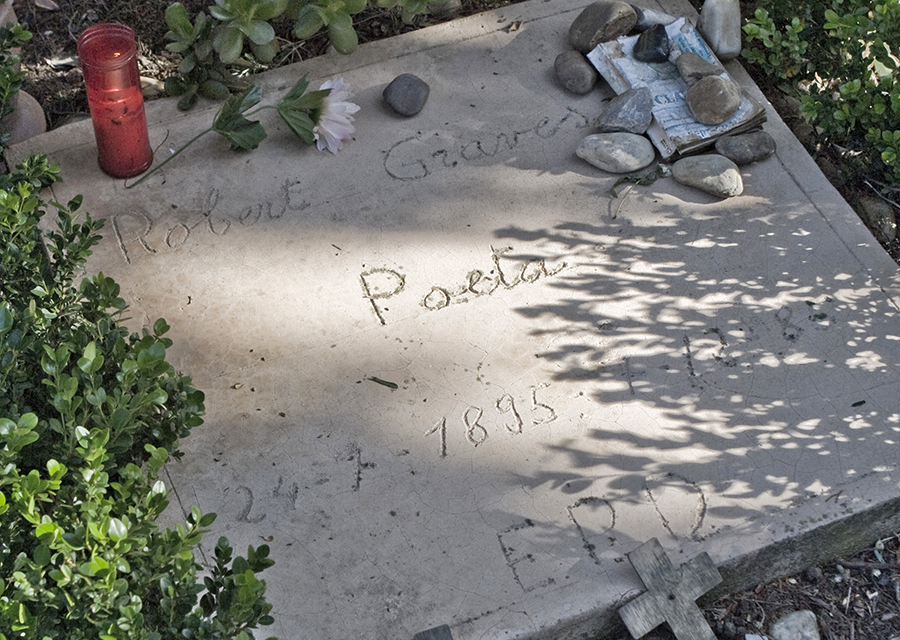 Walk off your lunch by taking a stroll up to the Església de Sant Joan Bautista and its cemetery to pay your respects. On the way down make sure you stop to savour Mallorca’s exquisite sweet oranges. Just like the traditional American lemonade stands, you can stumble across a lady selling and juicing outside her home. 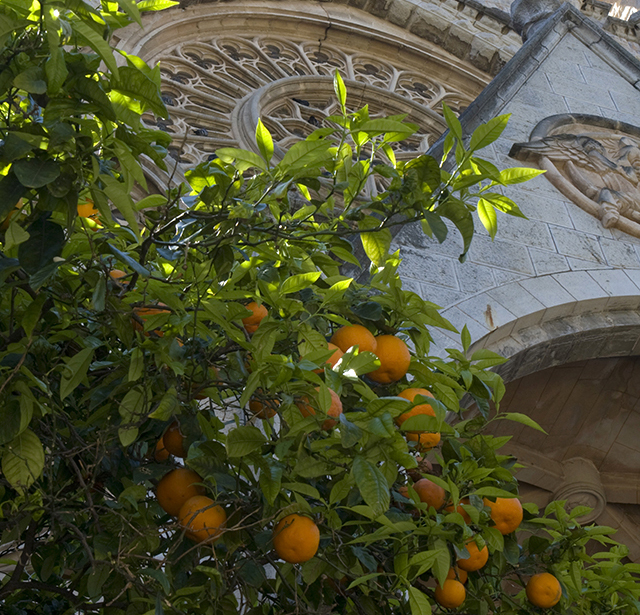 You can also visit La Casa de Robert Graves opened to the public in 2006, the house is as he left it. Spend an afternoon strolling through the gardens to absorb the tranquility and landscapes that inspired many of his great works that were penned here. 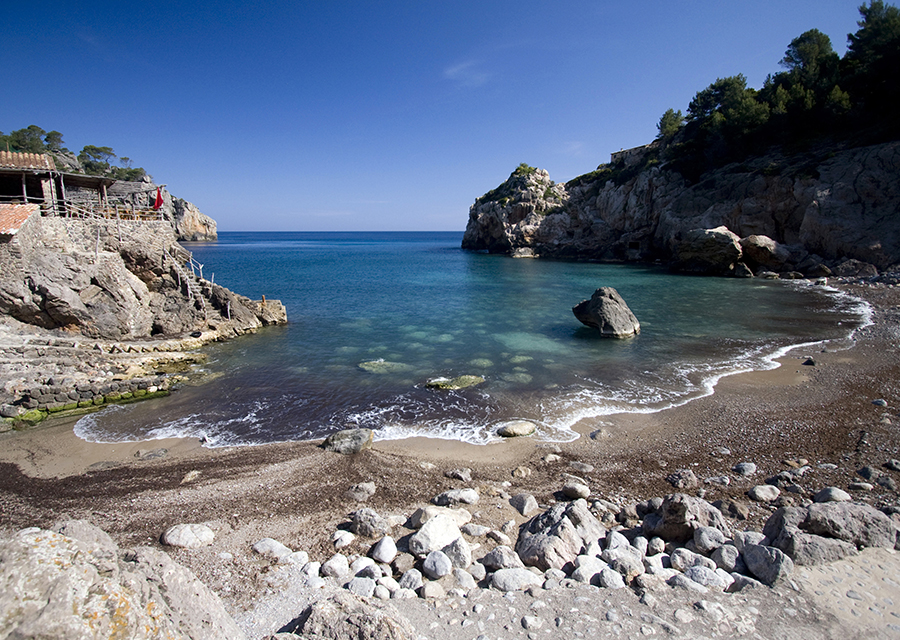 Mallorca is full of tasty treats, with nets of freshly caught fish and seafood, Spain’s famously delicious little black piggies and the finest olive oil, this island is a foodie’s dream. You can get down with the fishing village culture and have lunch at one of the best fish shacks in Spain, Ca’s Patro March - Heston Blumenthal says so himself. He declares Sóller’s prawns the best he’d ever had. As you can imagine reservations are essential, especially on their driftwood balcony cut in to the cliffs overlooking the small pebble beach. 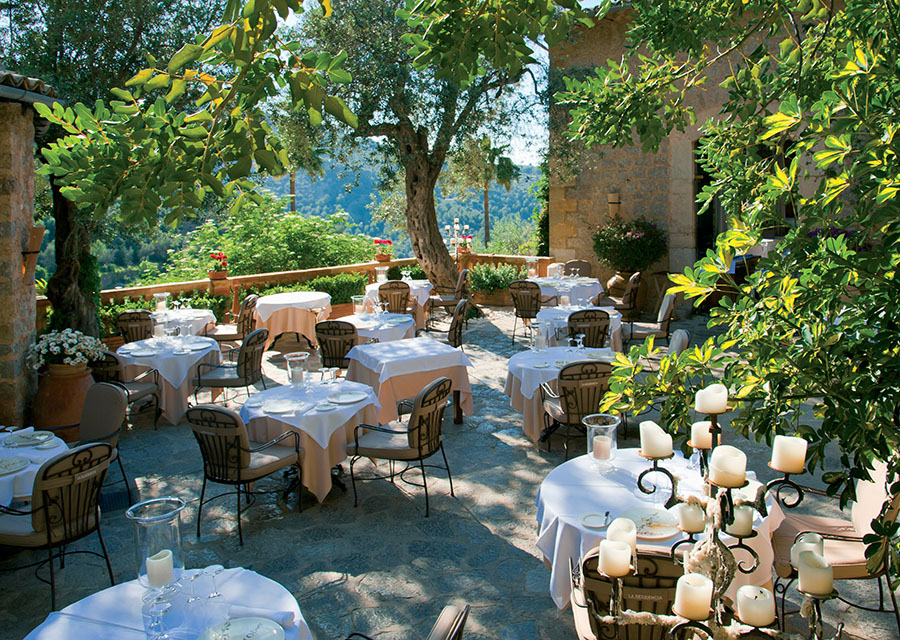 Alternatively you can splash out and spend an afternoon at La Residencia hotel’s El Olivo restaurant. Facing Deià and the Església de Sant Joan Bautista the views are spectacular. Eat your lunch to the intermittent bray of their resident donkeys. The modern Mallorcan tasting menu changes seasonally and is one of the best on the island. Or you can fill your table with an array of mouth watering tapas from crispy cannelloni filled with pork shin, seafood croquetas, octopus a la gallega, scallops wrapped in bacon, and the list goes on. All presented with impeccable service and washed down with a local wine. 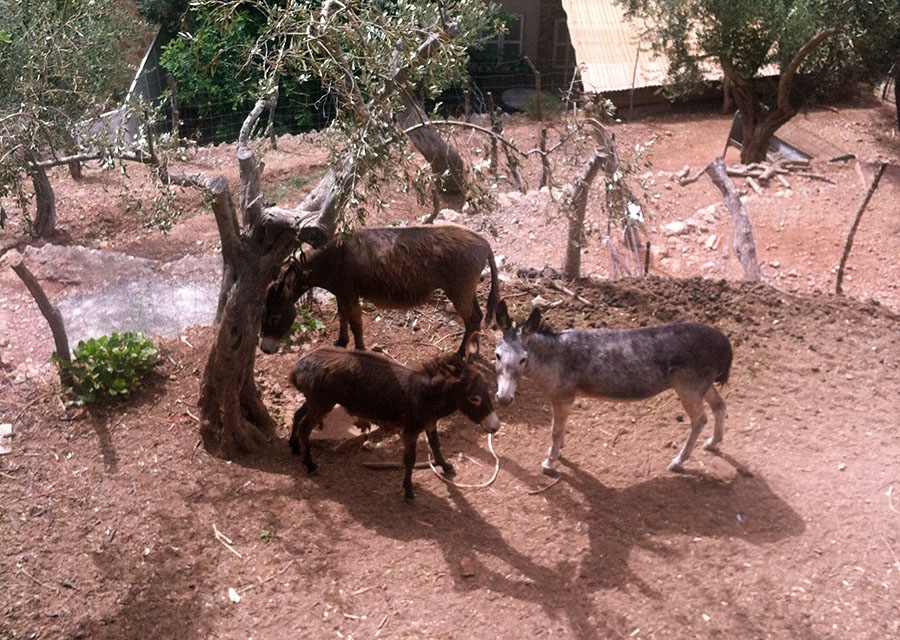 The Palau del Rei Sanxo and its adjoining apartments where novelist George Sand and Frederic Chopin lived for a winter. Recitals of Chopin’s music are held at intervals through out the day.

Spend a day in the capital, Palma de Majorca. Visit La Seu - the formidable gothic Cathedral – and get a glimpse of Gaudí at the altar, stroll along the harbor, and drink in the art and architecture (and perhaps a few cocktails). 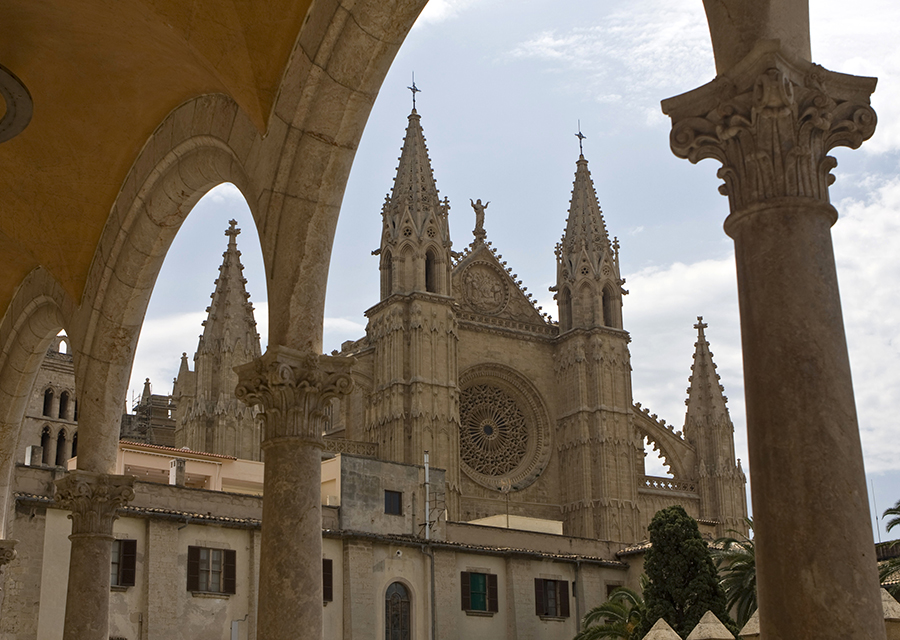 The Coves d’Artà. Mallorca’s landscape is packed with stunning caves and grottoes, a feature of the porous limestone of the Balearic islands. The Most spectacular and atmospheric, perhaps partially due to their bloody history are the Coves d’Artà. These caves were the hideout for more than 2000 moors that were eventually smoked out and slaughtered after Jaume I’s invasion. 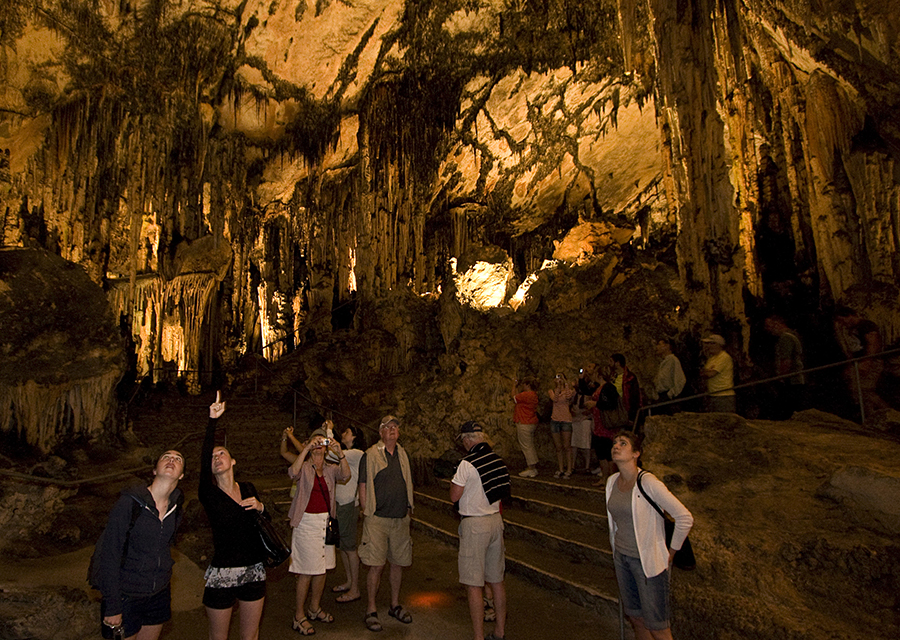 Finally if it all gets too much, escape from the crowds with a trip through the Serra de Tramuntana, a Unesco World Heritage Sight since 2011. Stay in a mountain top sanctuary or try the six-course tasting menu of the week at Santi Taura, one of the rising stars of new Mallorcan cuisine. Enjoy Santi’s elegant décor, locally sourced, seasonal products and the simplicity of being told there is only one thing to choose on the menu and the wine you want to go with it.

Or if you feel like that is all too civilized, head to Nikki Beach for a taste of Ibiza – pumping music, white sofas, cube dancers by the pool, magnums of rosé, Mojitos that need two hands and yacht spotting! 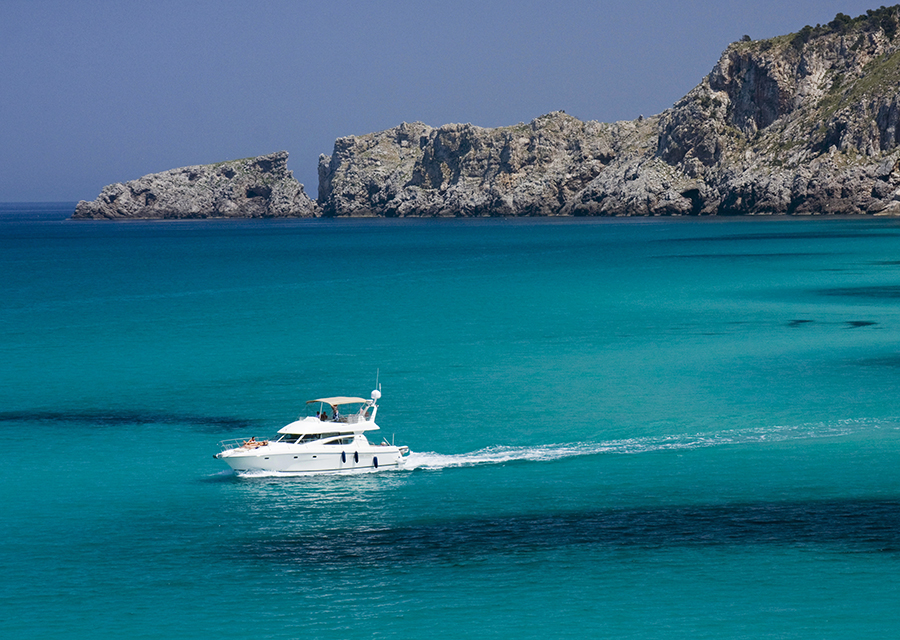