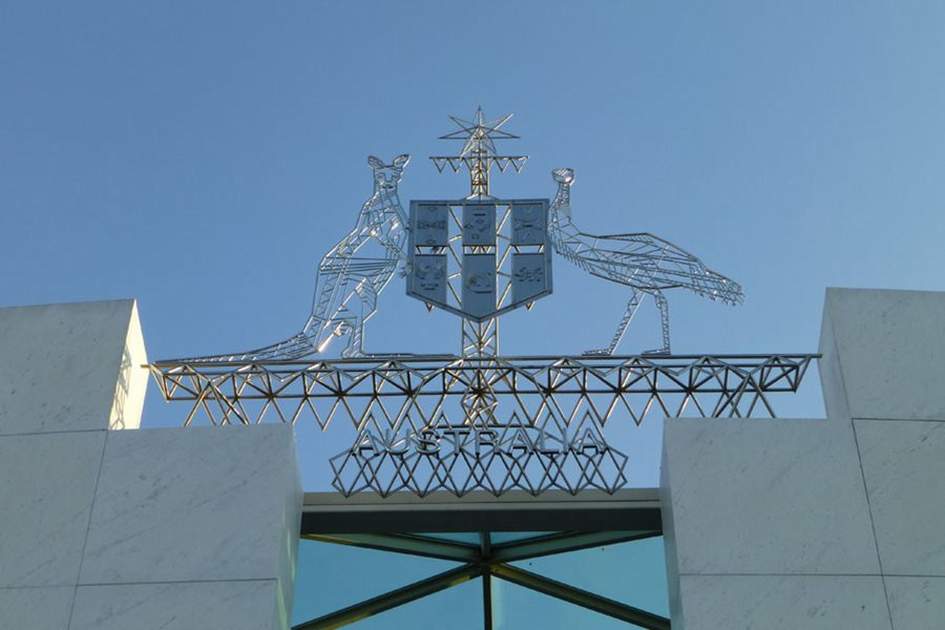 Canberra gets a rough press. A purpose-built capital city, constructed on a compromise, it's much maligned by Australians who think of it as soulless and dull and is often overlooked by tourists in favour of Australia's bigger, bolder cities like Sydney and Melbourne. Two friends of mine moved from the UK to Canberra last year and I went to visit and decide for myself.

Canberra celebrated its hundredth birthday this year. It's a baby in city terms and for such a young place I think it packs a punch. A lot of the national galleries and monuments are here and, of course, the country's parliament. But there's more to Canberra than civic duty. I found a city that, with its sweeping boulevards and modern architecture, is slightly strange to British sensibilities, but by no means dull. I experienced friendly people, aboriginal art, gorgeous green spaces, impressive views, quirky cafes and markets, and wild kangaroos during my time here. And I actually found the order and spaciousness of the place quite peaceful - it made a welcome change to the brassiness of Sydney and the bustle of Melbourne, which I also visited in the same trip.

Here are some of my favourite photos, which I hope will convince you to consider getting off that coach on the way from Sydney to Melbourne.

I arrived in Canberra in the afternoon, having caught the coach from Sydney. The early springtime weather was glorious and we went for a walk up to Mount Ainslie as the sun was setting. 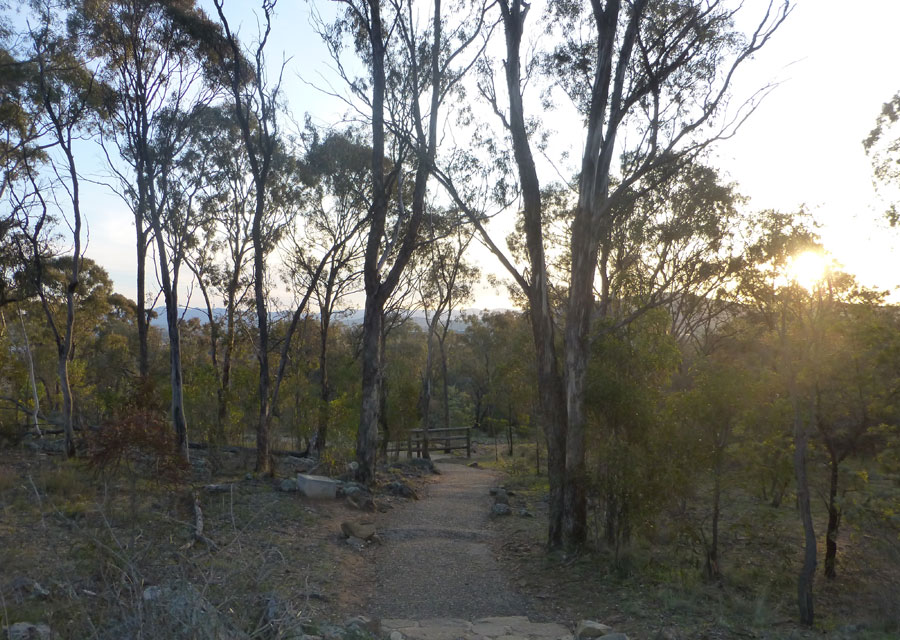 On the slopes of Mount Ainslie we saw wild grey kangaroos. To a Brit, this was a BIG DEAL. I had seen kangaroos at Taronga Zoo in Sydney a few days earlier, but seeing them in the wild was just incredible. I couldn't believe how close I was to them and how well camouflaged they were with their surroundings. A really special moment. 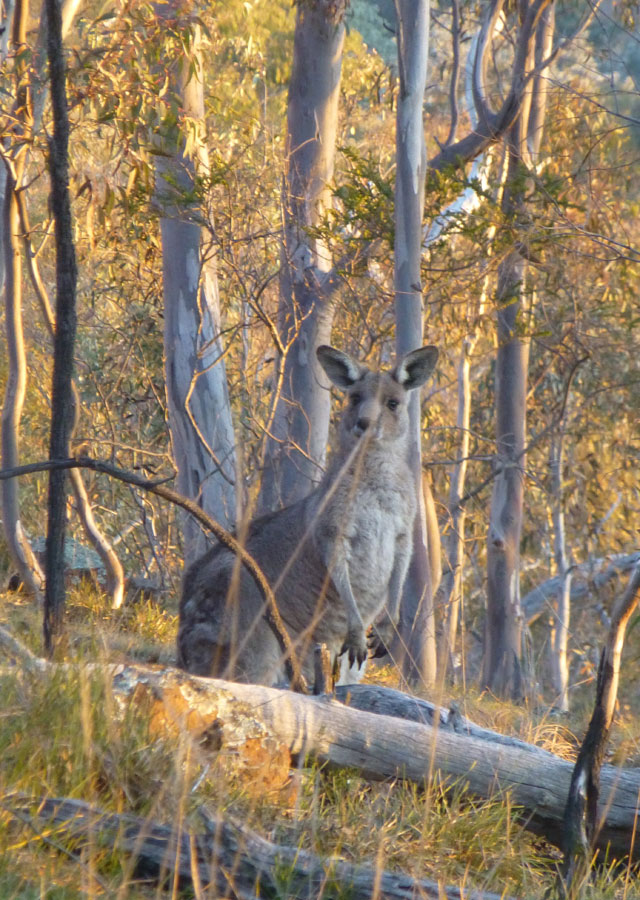 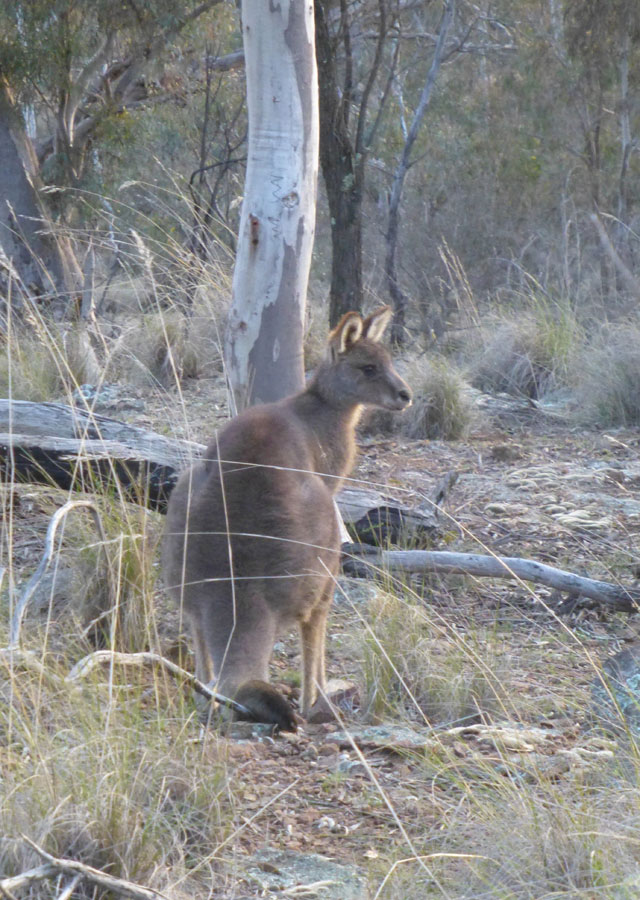 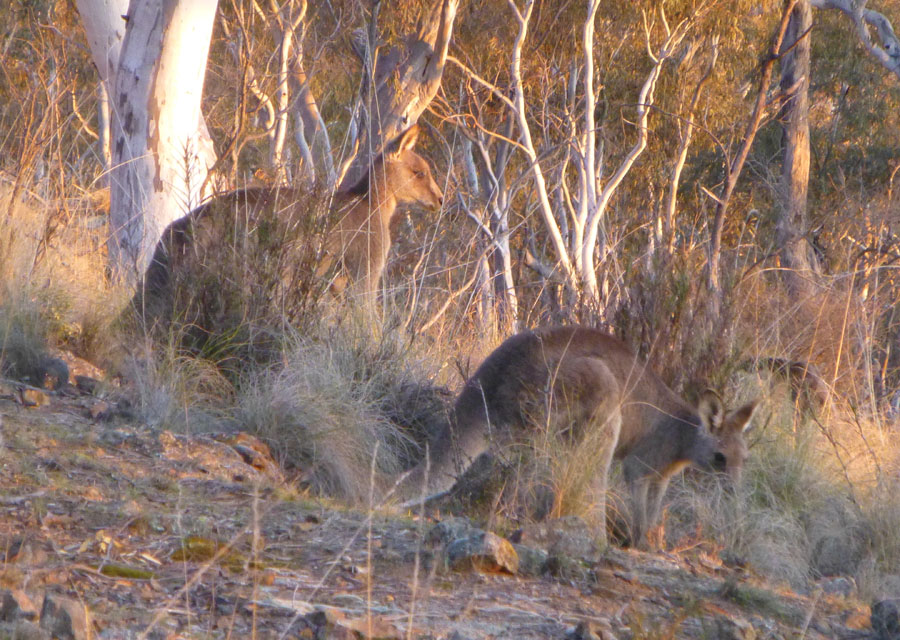 Here, you can see a couple just behind us, grazing on the grass. 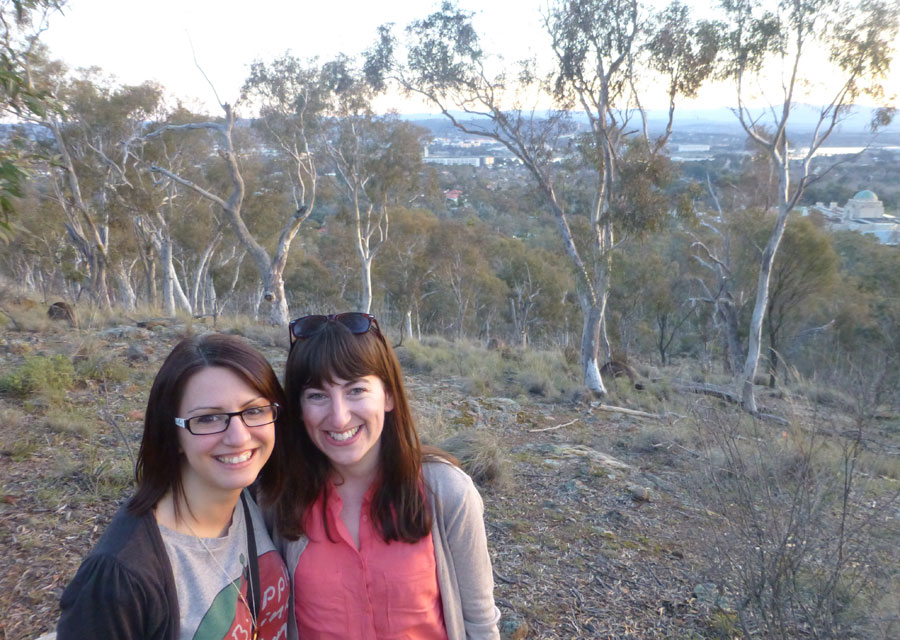 From Mount Ainslie, you can see all over Canberra and get a true sense of how well planned the city is. In this picture you can see the Parliament House on one side of Lake Burley Griffin and the National War Memorial on the other. 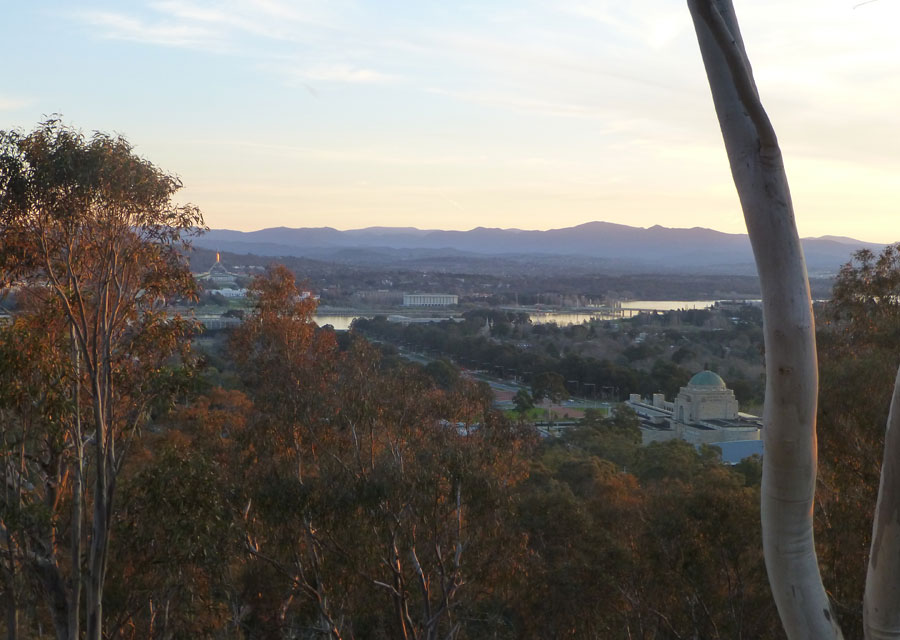 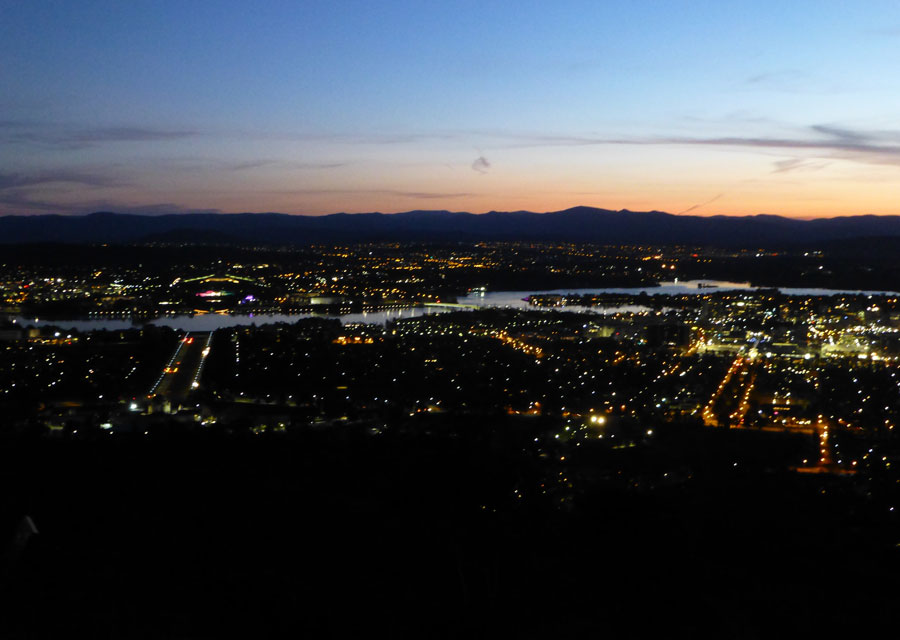 On my first morning in Canberra, my friend took me to a great cafe for brunch. Mocan and Green Grout in the New Acton area of the city is a really cool place, where the chefs cook your food for you in the middle of the seating area. I had gorgeous poached eggs. And gorgeous poached eggs always make me happy. 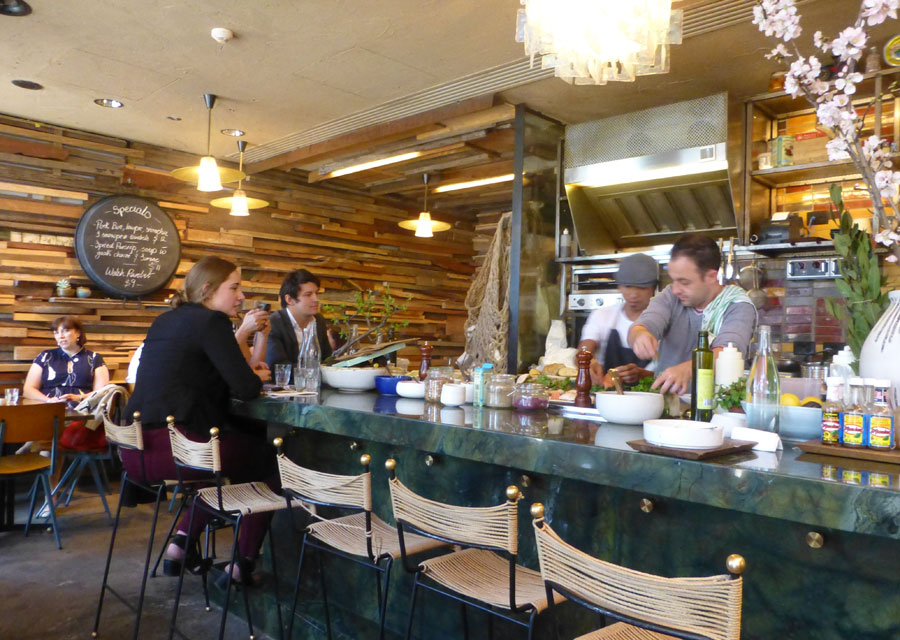 You can't go to Canberra and not see the Australian Parliament. Especially when you're visiting during election week, as I was! I've seen lots of European parliament buildings, but this one was very different. It's modern and angular with an absolutely huge flag pole. You can walk up the grassy sides of the building on to the roof for great views over the city. I was interested to see that the chambers inside reflect the British parliament in colour scheme but are more muted, so that the House of Commons green becomes the House of Representatives eucalyptus and the House of Lords red becomes the Senate ochre (to represent the Australian land). It was really fascinating to be there during such a politically important week. 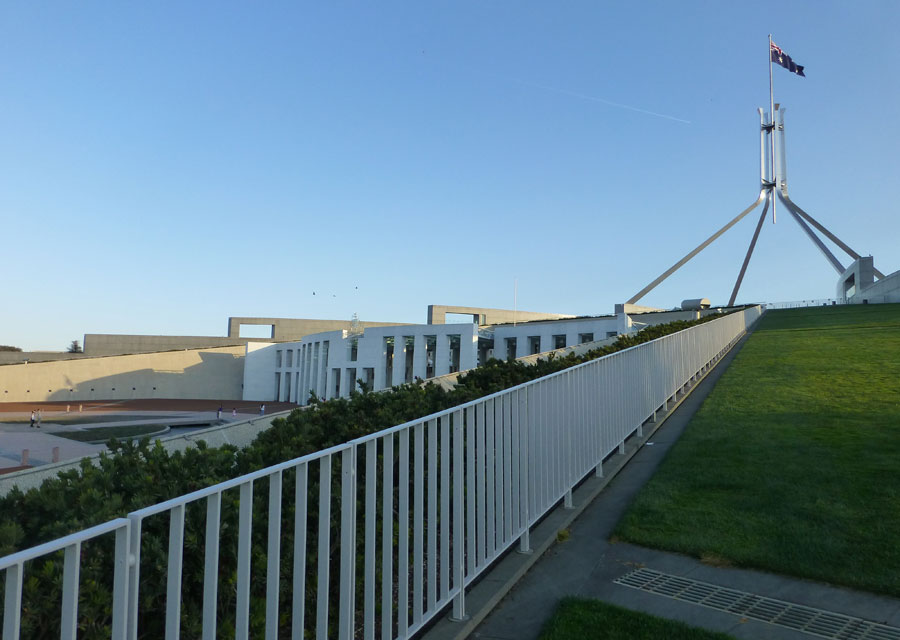 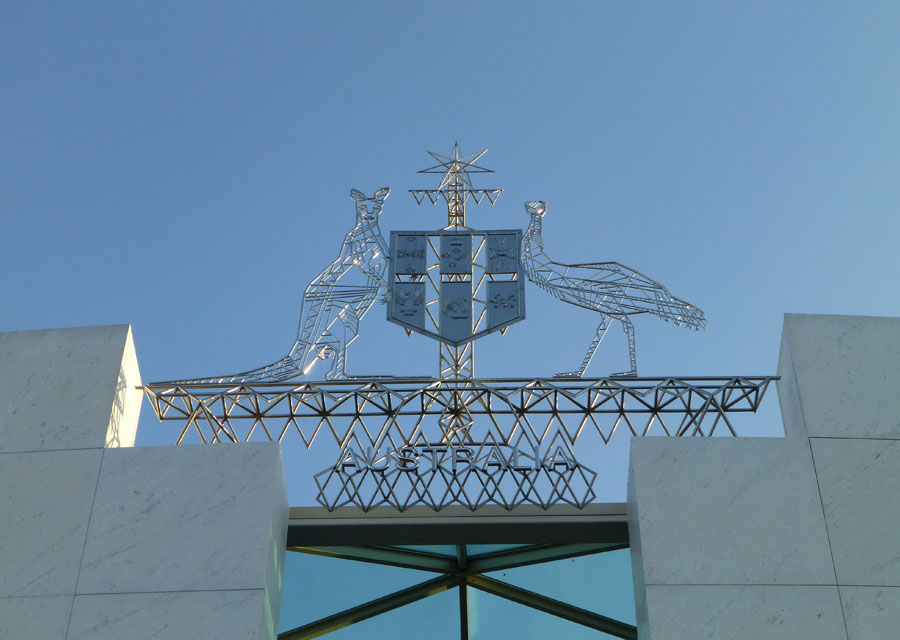 Canberra is home to the National War Memorial. It sits at the end of Anzac Parade; a wide boulevard lined with several individual memorials to specific conflicts that the Australian forces have participated in. The picture below is taken from the war memorial steps - you can see Parliament House in the distance. The memorial itself is very moving and is surrounded by pretty gardens. 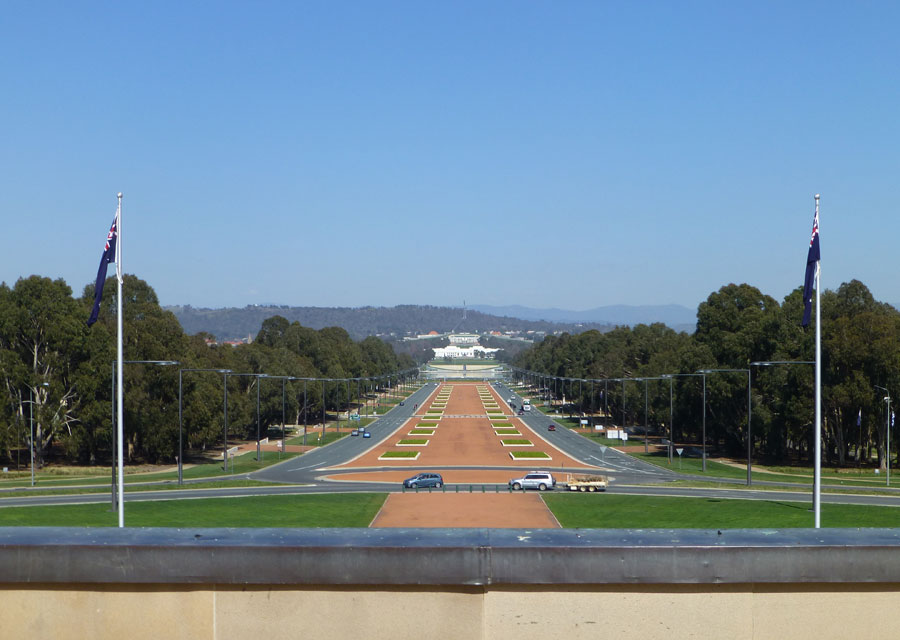 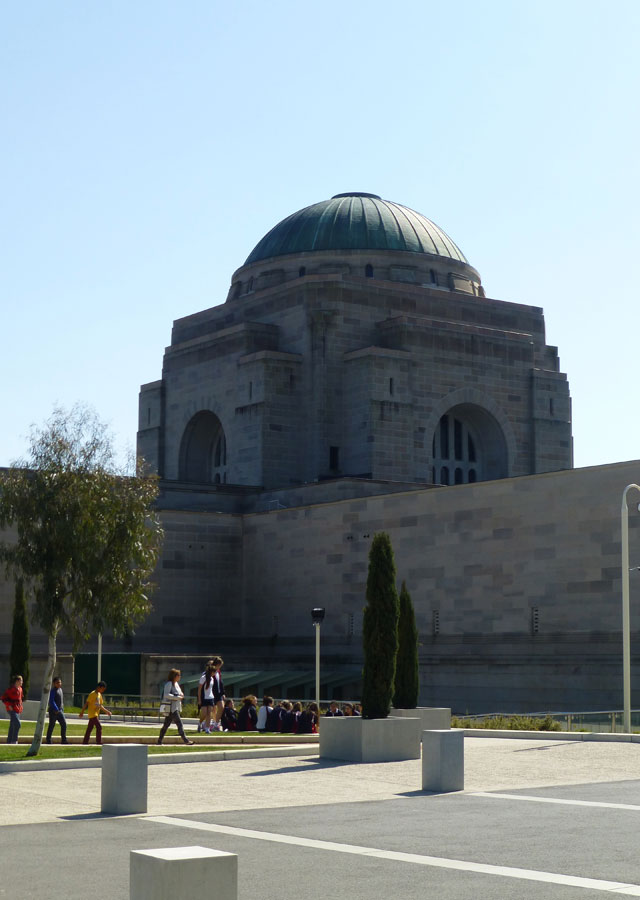 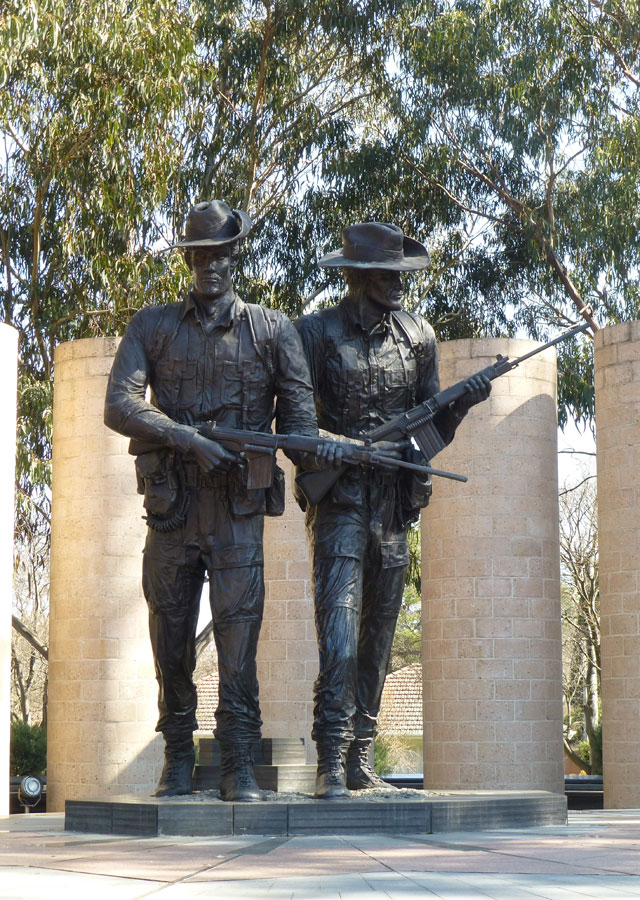 The bird below is an Australian magpie. They are known to swoop at cyclists at certain times of the year and I think you can tell in this picture that he means business. 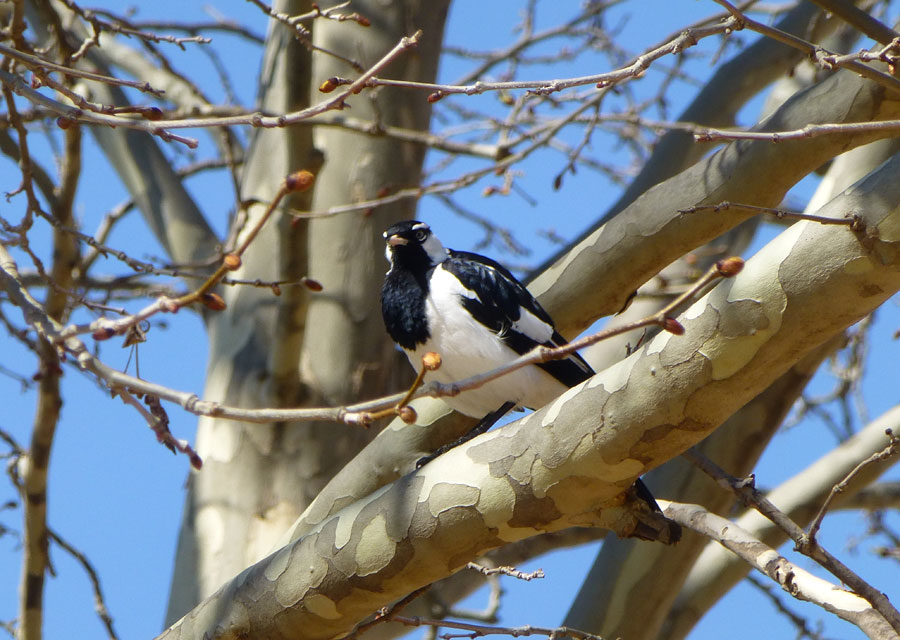 The National Botanic Gardens are a real treat. We spent hours wandering around them in the sunshine. It amazed me how different the plants are to anything I'd ever seen before. The gum trees were particularly lovely. 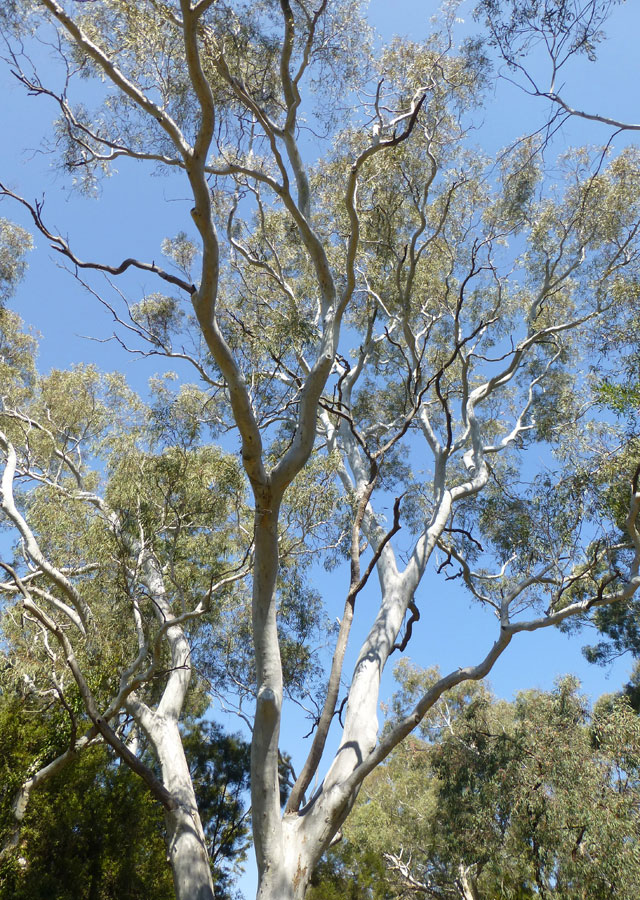 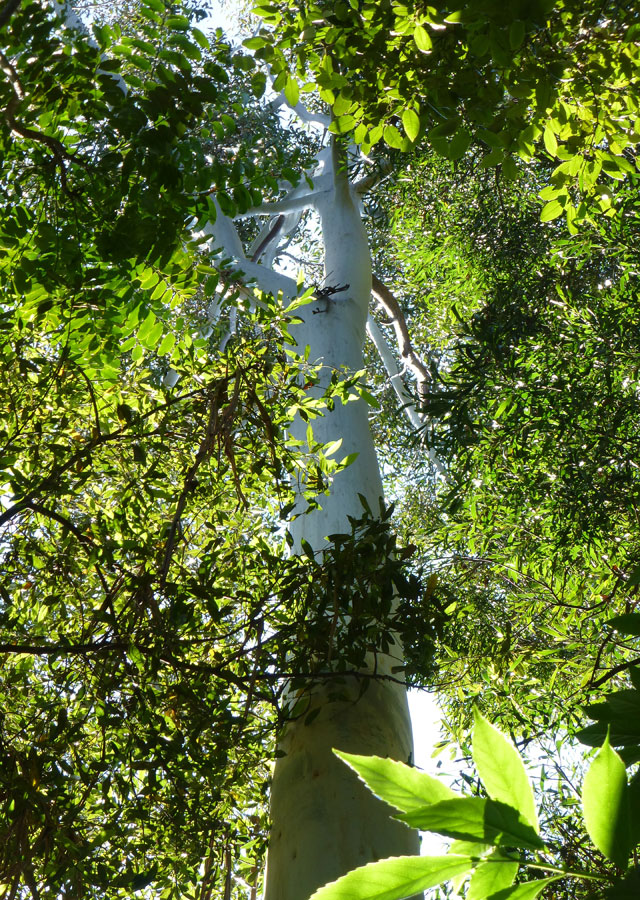 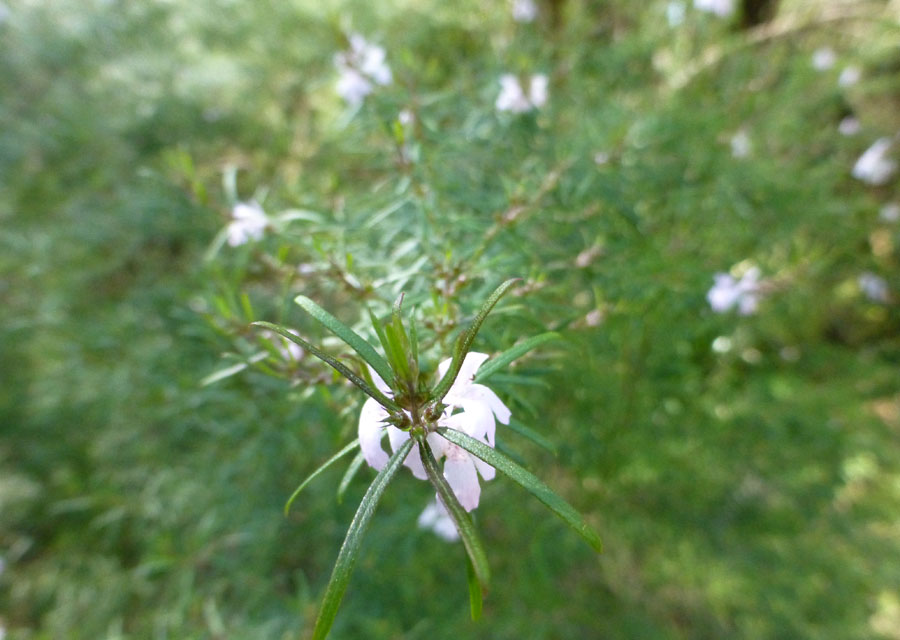 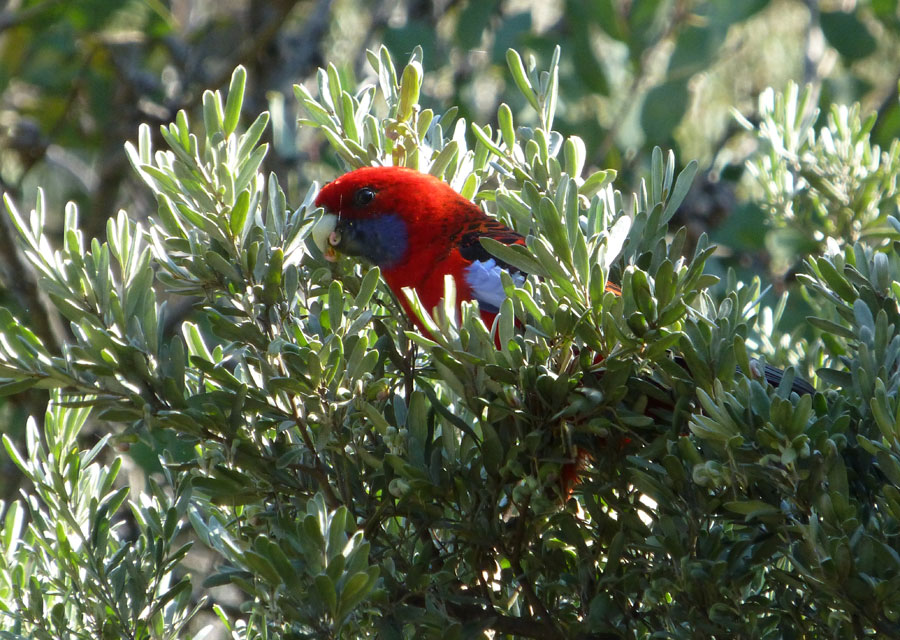 The picture below right shows the National Carillon on serene Lake Burley Griffin. This bell tower was a gift from the British government. In the background you can see a gift from the American government, a stone eagle on top of an obelisk - locally known as the 'chick on the stick'. 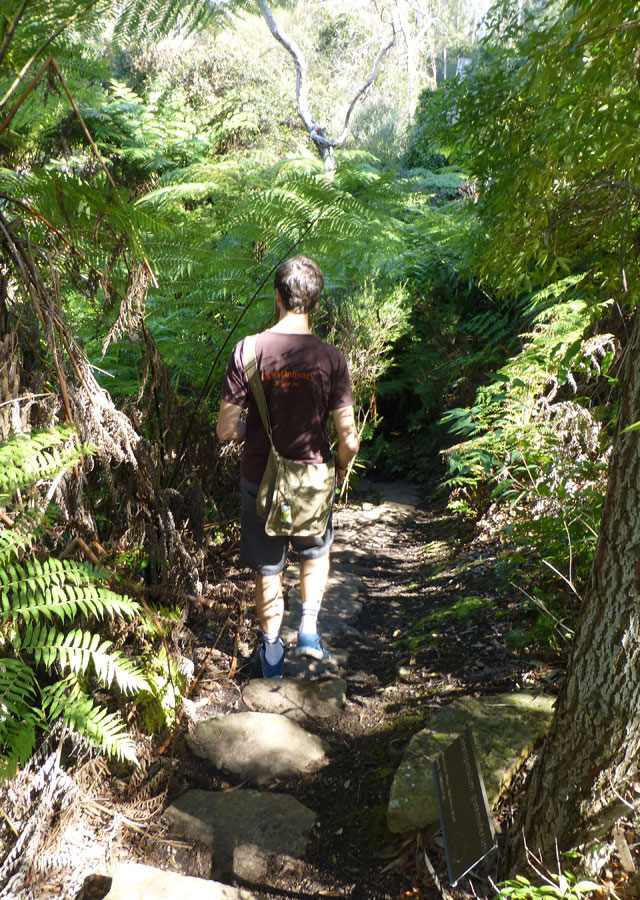 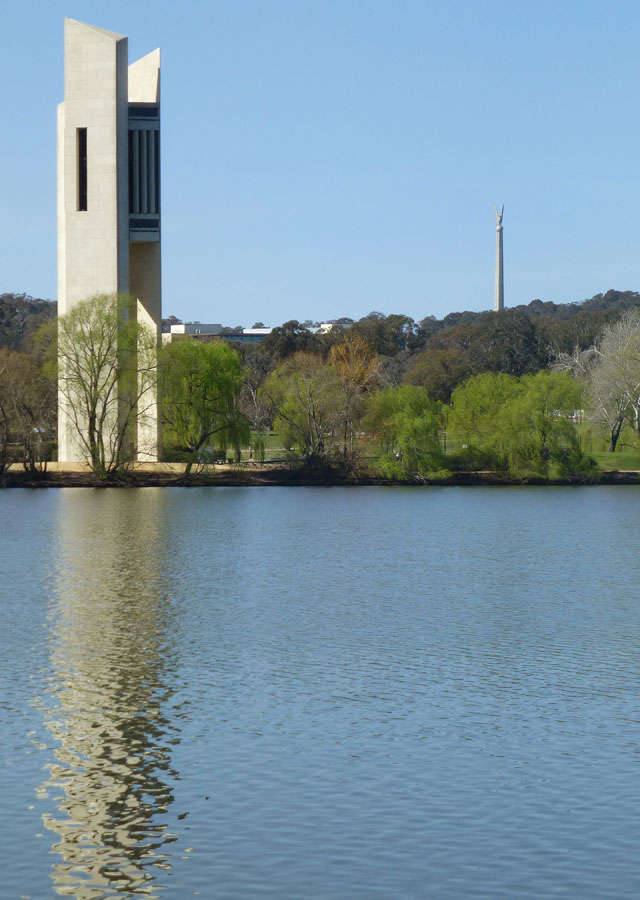