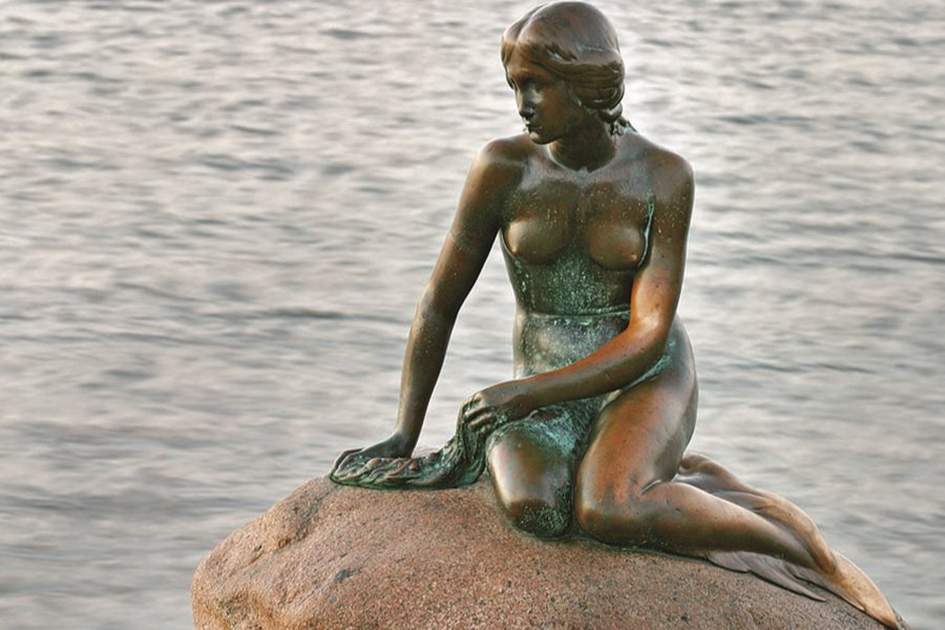 The Little Mermaid (Den lille havfrue) is celebrating her 100th birthday today, another milestone in her less than quiet life. Based on Hans Christian Andersen's 1837 fairytale, she sits today upon a rock in Copenhagen's harbour under the almost constant scrutiny of visitors' camera lenses.

In Andersen’s fairytale, this tragic sea-girl exchanged her voice for human legs in order to gain the love of an earthly prince, but had to watch in silence as he jilted her for a human princess. In desperation, she threw herself into the sea and turned into foam.

She has been decapitated twice, blown up, painted various colours, co-erced into demonstrations, been dragged to Shanghai and back, and clambered over by thousands. Fortunately, the workshop of sculptor Edvard Eriksen retains the original moulds from 1913, and new parts can be cast if necessary.

She remains as calm and dignified as always, or at least as dignified as a naked mermaid can be. Although being one of the most famous statues in the world it must be said that the statue is rather small and unassuming.
She now has somewhat unorthodox companionship in her new neighbour 'Genetically Modified Little Mermaid' a few hundred metres away. Sitting upon her own rock in a similar stance, this statue's design echoes that of Den lille havfrue but with a twisted and elongated appearance. This obviously was enough to ensure that the still strongly monitored copyright was not infringed.

Getting to the little mermaid

Lille havfrue is actually a bit of a stroll from the centre of town. Head north via Amalienborg and Larsens Plads passing the Kastellet to the west. østerport is the nearest train station.

Buses don't quite reach the mermaid, but route 1A stops outside the Design Museum Denmark then it's a short walk down Esplanaden. Route 26 can also be used, stopping near østerport then a stroll down Indiakaj.

Both northbound buses can be caught from outside Christiansborg.

Find out more in the Berlitz Pocket Guide to Copenhagen