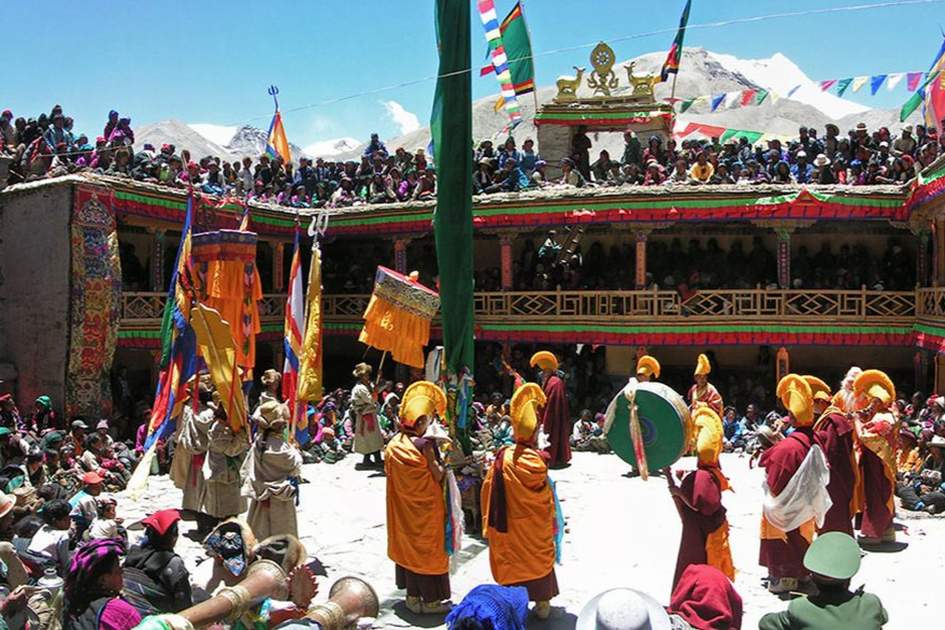 Photo taken 24 May 2005, at the Mani Rimdu festival at the Rongbuk monastery in Tibet, China. For most people there, it was the first time the authorities had allowed the festival to go ahead in living memory.

From 10-13th November 2014, the Mani Rimdu dance-drama festival will be held at Thyangboche Monastery in the Khumbu area of Nepal, high on the trekking route to Everest.

This colourful festival sees monks enact Sherpa legends and evoke the protector gods with masked dances, prayers and feasts. Clad in silk robes, the monks perform ritual dances depicting Buddhism's subjugation of it's predecessor in the region, the ancient Bon religion. It is an ideal festival to combine with trekking, as Thyangboche is on the well-worn trail to Everest Base Camp, and many tour operators can plan a fitting itinerary that incorporates it.

In Nepal, it is often said, every other building is a temple and every other day is a festival. There are more than 50 festivals, many lasting several days or even weeks, each year. Some, such as Bhaktapur’s boisterous Bisket Jatra, are epic undertakings with crowds of thousands and attendant tourist hordes and camera crews; others are little-known local affairs in the compound of some forgotten village shrine.

The majority of Nepal’s festivals have a religious underpinning, tied to one or both of the two great religions of the land, Hinduism and Buddhism. Hindu festivals generally combine mass pilgrimages and puja offerings at temples followed by large melas (fairs), feasts and animal sacrifices. Buddhist festivals tend to be quieter, but equally colourful. Adherents of both faiths, however, often participate in one another’s festivals.

Some of the great religious events celebrated in Nepal are universal to the wider Hindu or Buddhist world – the chaotically colourful spring festival of Holi, for example – and some are based on a comparatively recent regal decree. But others have their roots in local traditions and folk beliefs that predate the arrival of any world religion in the Himalayas. There are thousands of gods and goddesses, demons and ogres to be appeased; the various seasons must be honoured, and there are essential rites for the blessing of seeds to be planted and crops harvested.

For more information about Nepal and its fascinating culture, see our comprehensively updated new edition of Insight Guide Nepal...

We chose this trip specifically as we are regular hill walkers and had always wanted to hike in the Everest region of Nepal, but had been put off by tales of smelly, dirty accommodations whilst on trek, which at our age is no longer of appeal. Thus, it... Read more

We recently spent 10 days in Nepal on tour organized by the local agent Rajeena. Nepal is an amazing country and our trip was made particularly special by Prim, our amazing tour guide. We normally prefer to travel on our own, but Nepal is a challenge for individual tourists. Prim made sure that everything from airport pickup to drop off went smoothly. Prim was extremely knowledgeable of all aspects of Nepal history, culture, the Buddhist and Hindu religions, flora and fauna. We were awed by the depth and breadth of Prim's knowledge and we came away with a deep appreciation of Nepal and its people. Prim was an excellent ambassador for Nepal! On a side note.....After Prim got us checked in at the Kathmandu airport and moments before we were to board our plane, there was a small fire at the airport which delayed all flights. The was brought under control by the authorities fairly quickly and we were never in any danger. Surprisingly, Prim became aware of the incident and stayed in touch with us throughout the delay and until we landed safely in Cambodia the next morning. We could not have had a better experience in Nepal!