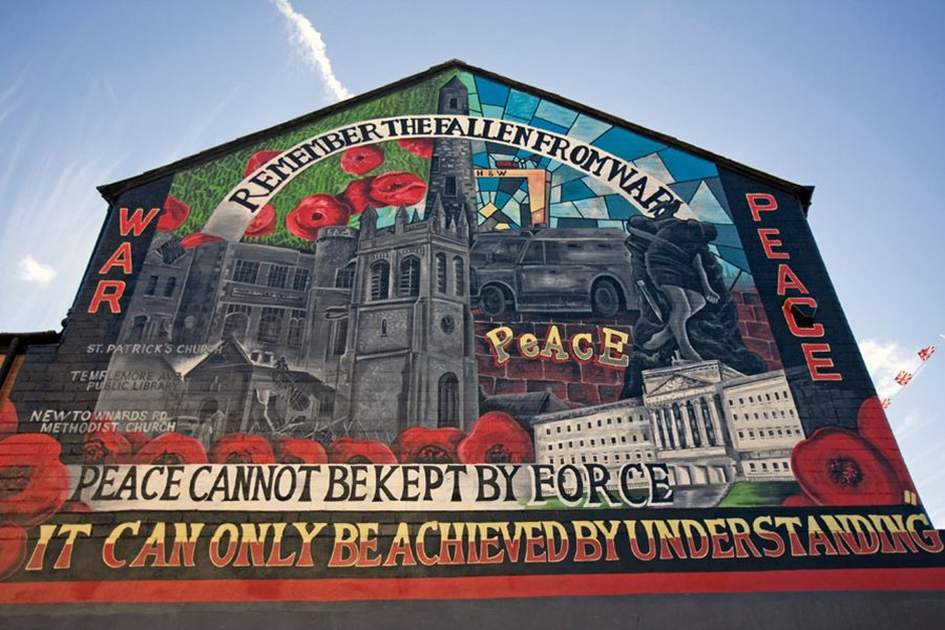 A mural in Belfast

From harsh political propaganda and monumental historic events to footballing and literary legends, murals on the walls of Northern Ireland’s cities tell a fascinating story.

Around 2,000 murals have been documented in Northern Ireland since the 1970s. The sectarian divide between Protestant and Catholic has long been an artistic pre-occupation across the North. A century after Protestant William of Orange defeated his Catholic father-in-law James II at the 1690 Battle of the Boyne, artisan coach painters celebrated with gable-end paintings of ‘King Billy’ riding triumphant on his white horse. The first mural to appear in Belfast was in 1908, again recording William’s victory at the Boyne. When partition in 1920 hived off Northern Ireland, triumphalist Orange murals were encouraged, deflecting the attention of poor Protestants from chronic unemployment and miserable housing.

Until the 1981 IRA hunger strike, nationalists and republicans confined their icons inside political and sporting clubs. Then, with a growing confidence that they would triumph over Protestants as Protestants had over them, republican murals were born. Protestant murals, on the other hand, had been restricted to references to 1920s gun running, portraits of English royals, biblical prophecies and portraits of William. Now Protestant paramilitaries saw their role as defenders of the faith. Contemporary military hardware appeared and the murals became increasingly aggressive in their nature. The images underlined the importance of the communities, where the borders lay and whose turf it was.

Along Sandy Row, the Shankill and Newtownards roads, working-class Protestant heartlands, are loyalist
organisation murals, including those of the UDA (Ulster Defence Association), which hark back to the B-Specials (a loyalist paramilitary police force disbanded in 1969) and to Cúchulainn, Hound of Ulster, and leader of the 100BC Red Branch Knights.

Meanwhile, in Catholic north and west Belfast, the icons became the lily of the 1916 Easter Rising, Cúchulainn (the republican version), dead hunger strikers and expressions of solidarity with Mexican and Basque revolutionaries. Some read ‘saoirse’ (freedom); others display a mordant wit in such altered traffic signs as ‘sniper at work’.

Another noted collection of murals is in the Bogside area of Derry City. Most famous is the ‘Free Derry’ mural declaring the area’s ‘independence’ from British rule.

Travel Belfast’s Falls and Shankill roads and you will see some of the most poignant tributes to those who died during the Troubles. Faces of the young look down on passing tourists, a haunting reminder of those harrowing years. The iconic mural of hunger striker Bobby Sands, unveiled in the Falls Road in 2000, is one of the most visited in the city. But the peace process has brought new hope to the city and the Falls and Shankill communities are rebuilding their lives.

Murals have evolved as a peaceful, yet powerful, art form, such as the images in east Belfast to C.S. Lewis and George Best, and tributes to one of the most poignant of Belfast icons, the Titanic. They are attracting a new generation of tourists, but remain a compelling reminder of the past and a persuasive tool for the future.

For more information on Belfast, click here, or buy our Great Breaks guide to Belfast today.