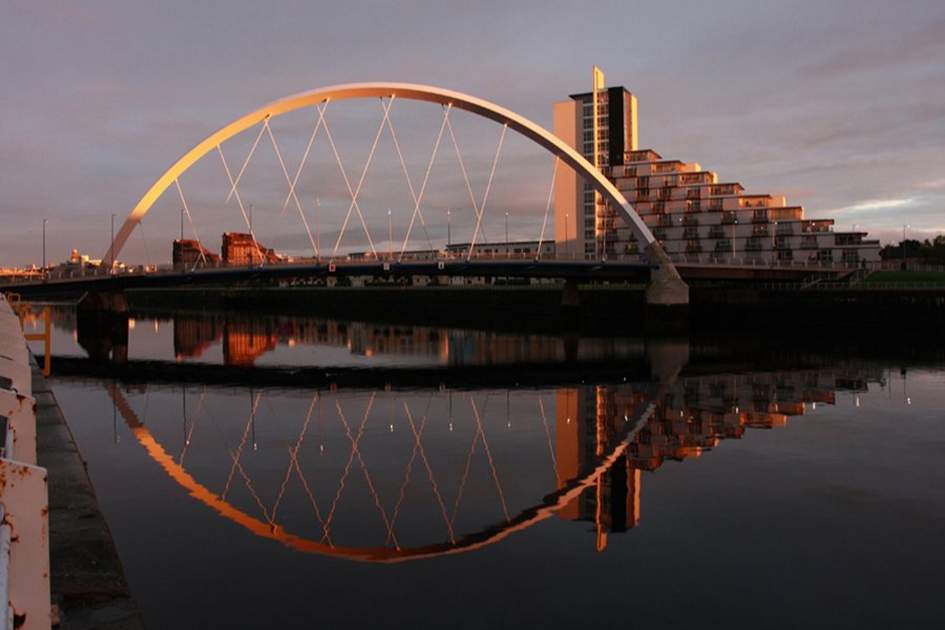 THE CLYDE ARC, KNOWN LOCALLY AS THE SQUINTY BRIDGE IS NOW IN FULL WORKING ORDER AFTER REPAIRS LASTING OVER SIX MONTHS CAME TO AN END IN JUNE THIS YEAR 2008. THE BRIDGE WAS OFFICIALLY OPENED IN 2006 BY GLASGOW CITY COUNCIL STEVEN PURCELL

The London 2012 Olympics are well under way, and the capital is buzzing with sporting fever. But it’s not just London that is playing host to the action. The games are unfolding at venues across the country – particularly the football competition, which is being staged at a number of the UK’s finest stadiums.

One such location is Hampden Park, Scotland’s impressive National Football Stadium. Although the competition here got off to a rocky start when the South Korean flag was accidentally shown at a North Korea women’s match, play has since gone smoothly, and Hampden Park is gearing up to hold its final fixture, the Sweden v France women’s quarter final tomorrow (3 August).

Hampden Park is also home to the absorbing Scottish Football Museum (tel: 0141-616 6139; www.scottishfootballmuseum.org.uk). It’s closed while the Olympic events at the stadium are taking place, but it reopens from 7 August. Don’t miss the opportunity to tour the stadium while you’re there.

What to do in Glasgow

Of course, there’s much more to edgy, vibrant Glasgow than a football stadium. Among its many attractions, you should be sure to check out its fantastic nightlife and art scene.

Drinking has always been a serious business in Glasgow. For sophisticated drinking and eating head to the Merchant City. Sauchiehall Street is mobbed by barefoot stiletto-wielding youth at weekends. The West End is popular with students and arty types.

Some of the best hostelries include Babbity Bowster at 16–18 Blackfriars Street, home to a heaving bar that attracts an eclectic mix of media types and local worthies, and Blackfriars at 36 Bell Street, which has a friendly bar, a range of real ale beers and is a comedy club and music venue at night. The Captain’s Rest, at 185 Great Western Road, is great for indie gigs and fun events including Disco Bingo. For traditional Scottish whiskies, try DRAM!, at 232–246 Woodlands Road, with more than 75 varieties on offer.

The swinging doors of the Charles Rennie Mackintosh-designed Glasgow School of Art (GSA) building continue to whir with the comings and goings of students and artists. It was the home of the influential fin-de-siècle Glasgow Group of modern artists – which included Charles Rennie Mackintosh – and also boasts celebrated alumni such as Alisdair Gray, Ian Hamilton Finlay, and contemporary artists Jim Lambie, Roddy Buchanan and Simon Starling.

Glasgow’s D.I.Y. spirit flourished in the late 1970s and early 1980s, when the city was deep in recession and blighted by sectarian violence. New Glasgow Boys and Girls took over warehouse spaces and set up gallery collectives, the most influential being Transmission in 1983 (www.transmissiongallery.org). By 1996 contemporary art was part of the mainstream and Glasgow got itself a grand building to showcase its artists: the Gallery of Modern Art (GoMA). Arts hubs CCA (Centre for Contemporary Arts), Tramway and Trongate 103 followed.

Both the Glasgow Art Fair and Glasgow International Festival – the city’s answer to the Venice Biennale – attract an international crowd. The impetus continues. The GSA is building a new teaching and research centre. Studio collectives are renovating warehouses and government-led partnerships continue to regenerate the Merchant City by creating a cultural quarter.

For more information on this exciting city, check out our Glasgow page or buy one of our fantastic Scotland guidebooks for more inspiration.