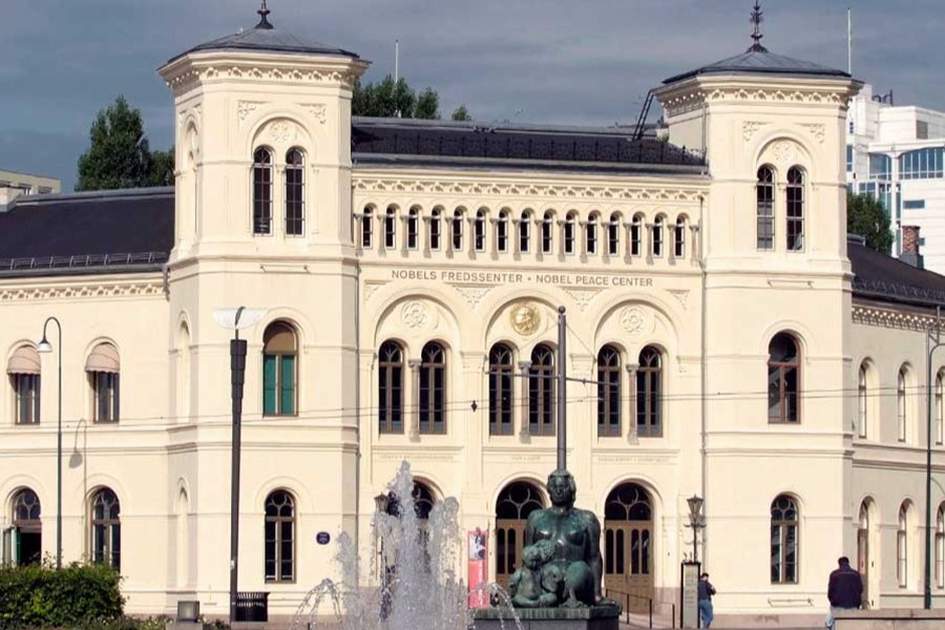 Nobel Peace Centre, Situated in the center of Oslo

Oslo grabs world attention once every year when the Oslo-based Norwegian Nobel Committee announces the winner of the Nobel Peace Prize. Swedish industrialist Alfred Nobel earmarked the bulk of his fortune for the creation of the coveted Nobel Prizes, and his will stipulated that while most of the prizes would be awarded in his native Sweden, he wanted the Norwegians to award the most prestigious of them all. Norway was still in its uneasy union with Sweden when Nobel died, and some suggest Nobel wanted to give Norway some support. A committee appointed by the Norwegian Parliament selects the winner, announcing its choice in October after sorting through scores of nominations. The prize itself is awarded in Oslo on 10 December, the anniversary of Nobel’s death.

On 10 December every year, a torchlit parade in honour of the Nobel Peace Prize winner ends here in the evening, and the crowd waits for him or her to make an appearance on the balcony of the suite at the adjacent Grand Hotel where the prize-winner always stays. The winner traditionally waves to the crowd and accepts cheers and applause, before stepping back inside to attend the annual Nobel banquet at the hotel. The Grand has a long history in Oslo and a prime location, just across the street from the Parliament. Its elegant Grand Café on the street level was a favourite haunt of playwright Henrik Ibsen, who’s featured in the café’s murals and has one of the hotel’s many suites named after him. The Grand has nearly 300 rooms, a special floor dedicated to women, and also features a luxurious restaurant where you can order the menu served to the most recent Nobel Peace Prizewinner at the annual Nobel Banquet that’s also held at the hotel every year.

As home to the Peace Prize, Oslo plays a visible role in promoting world peace, and Norwegians take the role seriously.The new Nobel Peace Center, next to City Hall where the award ceremony occurs, has emerged as an important venue for showcasing peacemaking efforts. The Peace Center, which opened in Norway’s centennial year of 2005, showcases not only the Nobel Peace Prize but also Norway’s role in international peace-brokering. The Peace Center is a high-tech, hands-on museum of sorts with information on the prize, its winners over the years and changing exhibits dealing with war and peace.

Plan your visit to Oslo to ensure that you don't miss any of the best sights (including the Grand Hotel and the Nobel Peace Center) with the new Berlitz Pocket Guide to Oslo. Major attractions such as the Munch Museum, the National
Theatre, the Akershus Fortress and Castle and the Forests of Nordmarka are detailed within colour-coded sections that enable you to find the information you need quickly. Oslo is an easy city to get around, so whether you are walking or using the city's effective public transport system you will find the attractions described in this guide accessible. Full colour fold-out maps provide instant orientation wherever you are in the city. The best places to shop and dine are detailed, including Karl Johan's Gate, along with details of local specialities and useful phrases for ordering food and drinks.