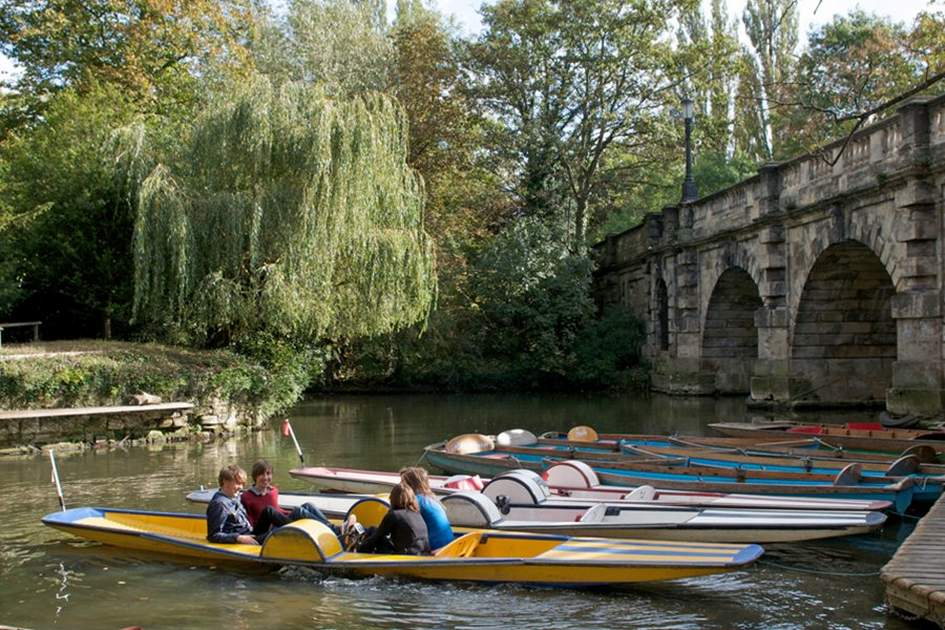 Take to the rivers and canals of Oxford for a fun, alternative way to view the City of Spires.

Oxford’s three waterways, the Thames (known here as the Isis), its major tributary the Cherwell (pronounced ‘Charwell’) and the canal provide not only a different perspective on the city but also an escape into rural surroundings right on its doorstep.

Noted for its absence of rowing crews and power boats, the Cherwell is much more tranquil than the Thames and is hence the preferred river for punting or rowing skiffs. Its peaceful narrow backwaters can be followed all the way up to the village of Islip to the north, but the Victoria Arms on the way (at Old Marston) is a well-known landing stage. Traditional Thames river craft, punts were originally used by the watermen for fishing and ferrying. Novices may have initial difficulties using the pole to steer and propel the punt, but a paddle is supplied in case the pole gets stuck in the mud or you veer towards the riverbank. Punts (chauffeured or not) and rowing boats can be hired from the Cherwell Boathouse, Bardwell Road (www.cher?wellboathouse.co.uk), from Magdalen Bridge Boathouse (www.oxfordpunting.co.uk), and from Salter’s Steamers (www.salterssteamers.co.uk) at Folly Bridge. The Cherwell can also be explored from dry land, in particular from the University Parks (accessible from Parks Road) and from Addison’s Walk in the grounds of Magdalen College.

Visitors can enjoy the Thames at Christ Church Meadow, through which a wide, tree-lined, well maintained track leads down to the waterfront and, to the east, to a long chain of college boathouses. This stretch comes alive during ‘Eights Week’, held from the Wednesday to the Saturday of the fifth week of Trinity (summer) term. Eight-oared crews from all colleges compete for the distinction of being ‘head’ of the river. The boat that crosses the finishing line without being ‘bumped’ (overtaken) is the winner, but any crew that successfully bumps five or more other boats throughout the week is awarded ‘blades’, meaning that each crew member can buy their own commemorative oar. Pimm’s and barbecued food are sold down by the boathouses, making Eights Week a sociable affair.

Near Christ Church Meadow is Folly Bridge (the Head of the River pub is a popular drinking hole here), where Salter’s Steamers Ltd offers cruises along the river to the village of Iffley and to Abingdon. Iffley can also be reached by following the towpath; it is worth visiting for the historic church of St Mary the Virgin. The interior of the Isis Tavern on the opposite bank brims with university boating regalia.

Another good place to enjoy the Thames is at Port Meadow, north of Oxford via Walton Street and the district of Jericho. The walk along the riverbank leads to the village of Binsey, with its pub, the Perch, and continues all the way to another historic inn, the Trout at Godstow.

Last but not least is the canal, a busy industrial waterway after its completion in 1790, but now a ribbon of tranquillity on the edge of the city, and home to many house boats. To explore it, take the towpath walk from Hythe Bridge Street to the north.

For more information on Oxford click here, or buy our Great Breaks guide to Oxford today.