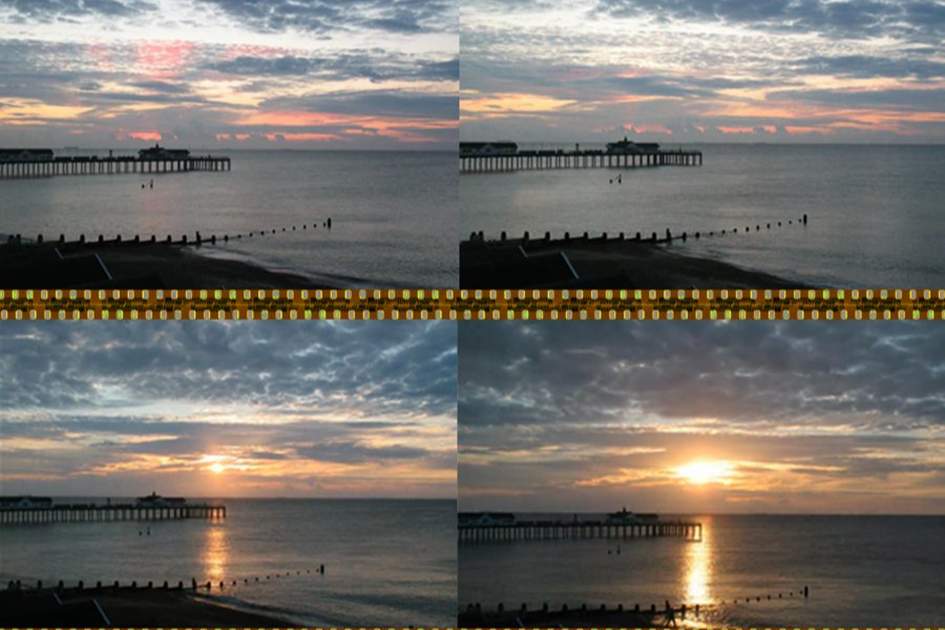 Until recently it was the domain of the dedicated enthusiast or professional, equipped with a modified video or motion picture camera. But with the introduction of feature loaded digital cameras and dedicated camera phone apps, time-lapse photography can now be experimented with by nearly anybody.

A time-lapse of city life or a beautiful rural scene with clouds sliding and bubbling in the sky is a fascinating thing that bewitches and fascinates. Sitting yourself down for an hour on a café balcony overlooking a busy square, or perched reading a book in the sun on a seaside bench, take out your camera and use the opportunity to produce something wonderful.

There are numerous websites and groups devoted to this subject (example) and they are the best place to get the in-depth technical background - but the basics to the technique are pretty simple.

Each second of film is created by rapidly showing separate images at a set frame rate (the number of images per second). The time-lapse trick is to increase or decrease the intervals between the capture of each of the images. The longer the gap between the images you take, the quicker the action on-screen occurs. The shorter the gap, the more it resembles real time. The images are then assembled either in the camera or phone and exported as a movie. The size of each image taken need not be enormous as most HD video systems are at most 1920x1080 pixels - much smaller than the high quality image your camera can probably produce. By setting your camera to these dimensions (or as close to) means you are not wasting disc space and processing power when converting to video.

Increasingly digital cameras now include a setting for time-lapse and it is becoming more and more common both in compact, mid range and professional DSLR’s. Older cameras can be used if you have access to an automated shutter release and there are enthusiasts producing unofficial firmware updates and scripts that can be run on some old cameras - especially helpful if you have an old digital camera you wish to modify for specific time-lapse use.

Once set up, just work out the image you wish to capture, check the camera is on a stable surface (turn off the flash if it might be getting dark) and start the photos off. If the camera only captures the pictures but does not convert them to a movie, you will need to import all the images onto your computer and combine them with a video software tool (for example, QuickTime on a Mac allows you to create a movie of a folder of images by opening the first one with the “Open Image Sequence” command).

There are loads of apps that can produce time-lapse footage, both for Android devices and iPhones. Most apps also compress the images to create the video and some can even add music from your music library. Stability can be an issue for a phone as they are thin and light, which means they can be knocked about accidentally. You can usually find something to secure the device wherever you are, however. I've used books, tree bark and even toilet roll tubes, anything to keep the thing still!

Tips for the best shot

If you are heading out with the sole intention of capturing some time-lapse, then these are pretty much essential. The camera has to remain stable throughout the shot or the resulting video becomes uncomfortable to watch. Table tops, walls and ledges can work perfectly well, but you are limited to the angles you can shoot from. A very pleasing effect is to pan and rotate a camera during the capture of the shoot; just remember that this needs to be done slowly and smoothly. There are dedicated systems available, but there are other means. I have a flat topped mechanical kitchen timer that rotates though 360 degrees in exactly 1 hour; a bit of superglue has resulted in a tripod mount which fits a small compact camera perfectly. It also rings to tell you when it has finished. A bargain at £10.

How long do you need to spend somewhere to get the video you want? That depends on how long you want the video to last and how many frames per second you will be using. Again, the web can provide some wonderful resources.

If you are capturing people walking around or trains and cars heading back and forth, then you won't have to spend much time on each shot. A busy crowd can be well captured in 10 minutes, which gives you an opportunity to perhaps find a different viewpoint to add an alternate view or a different subject altogether.

If you are capturing a sunset then you should get to your desired vantage point early. This kind of film will take a few hours. Remember, you will need a few seconds of “bedding in” in your video to allow the viewer to familiarize themselves with the surroundings before the main subject begins. Keep capturing images until total darkness has descended. Placing something interesting in the foreground is a fantastic idea, a cityscape works beautifully during a sunset as all the city's lights gradually turn on one by one.

One thing to remember is that you will be set up with a camera for some time, be it on a tripod, on a café table, wall or ledge; it does raise a higher risk of undesirable interest. Keep a close eye on it!

Some great examples of time-lapse projects

A beautiful short film of Vancouver by David and Dan Newcomb.

Tokyo as produced by mockmoon. Here the photographer has also included a technique of blurring the top and bottom of some of the images to produce an effect similar to miniaturisation.

.......and our destination of the month Iceland by ArtifactProductions.