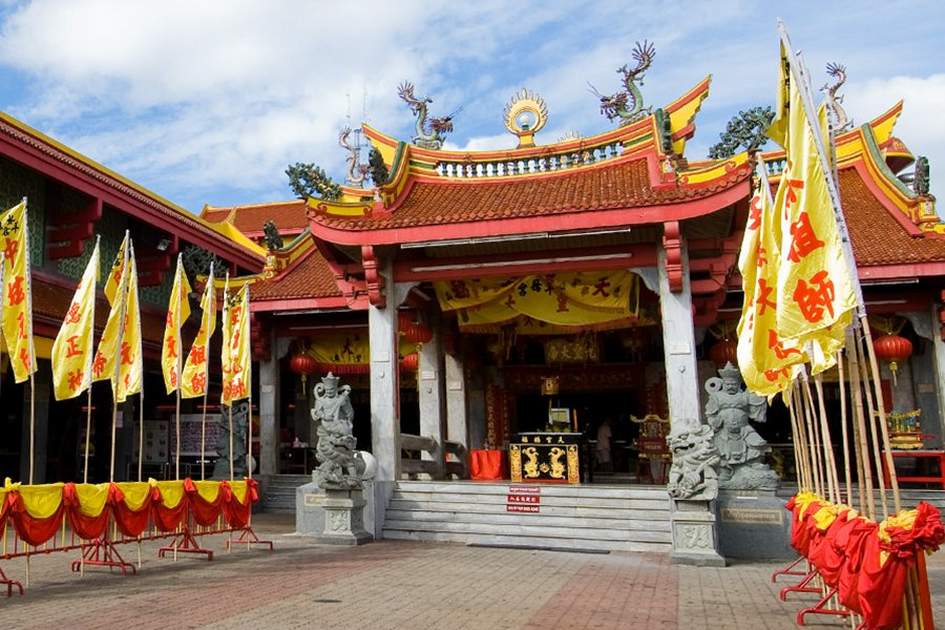 Devotees striking their heads with axe blades, cutting their tongues with knives and rolling in broken glass are common sights at the Vegetarian Festival in Phuket, Thailand.

According to legend, early Chinese settlers who arrived in Phuket 200 years ago witnessed the origins of the island’s most unusual event, the Phuket Vegetarian Festival. The festival is celebrated in the first nine days of the ninth month of the Chinese lunar calendar, usually in late September or early October.

The event is somewhat like a Taoist version of the Christian Lent, when devout Chinese Thais abstain from eating meat. In Phuket Town, the festival’s activities centre on six Chinese temples, with Jui Tui Temple, on Thanon Ranong, the most important, followed by Bang Niew Temple and Sui Boon Tong Temple. The festival is also observed in Kathu Town in Phuket (where the Vegetarian Festival is believed to have originated), and also at Trang Town in Trang Province.

Devotees at the Vegetarian Festival organise processions, make temple offerings, stage cultural shows and consult with mediums. They also perform a series of bizarre and extraordinary acts of self-mortification that, to the uninitiated, seem scarcely credible. Devotees enter into a trance designed to bring the gods to earth to participate in the festival, then walk with bare soles on red-hot coals, climb ladders made of razor-sharp sword blades, stab themselves with all manner of sharp objects, and pierce their cheeks with sharpened stakes, swords, daggers and even screwdrivers. It can be a bloody and disconcerting sight. Miraculously, little permanent damage seems to be done.

The opening event is the raising of the 10-metre (30ft) -tall lantern pole to notify the gods that the festival is about to begin. Meanwhile, altars are set up along major roads bearing offerings of fruit and flowers, incense, candles and nine tiny cups of tea. These are for the Nine Emperor Gods of the Taoist pantheon invited to participate in the festival and in whose honour the celebrations are held. Thousands of locals and visitors line the streets to observe the events, which are accompanied by loud music, frenzied dancing and the constant noise of exploding firecrackers.

Phuket’s Chinese community claims that a visiting theatrical troupe from Fujian almost two centuries ago first began the festival. The story goes that the troupe was stricken with a strange illness because its members had failed to propitiate the Nine Emperor Gods. In order to recover, they had to perform a nine-day penance, after which they became well.

Spectators and participants can enjoy specially prepared vegetarian food at street stalls and markets all over the island. Strangely, these vegetarian dishes, in Thai or Chinese style, are made to resemble meat. Though made from soy or other vegetable substitutes, the food looks and often tastes very much like chicken, pork or duck.

For more information on Phuket, click here, or buy one of our Thailand travel guides.