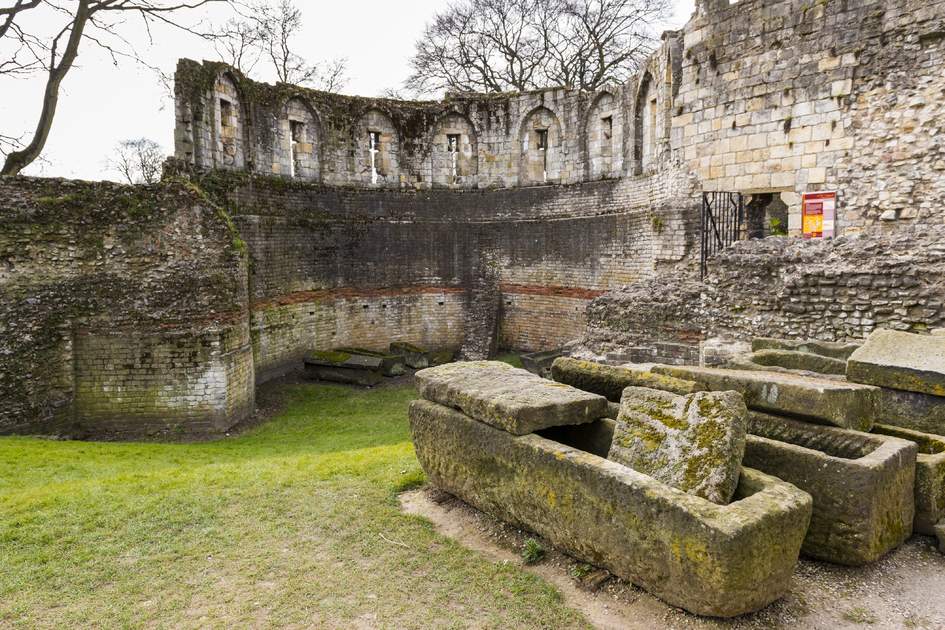 The northern English city of York played host to everyone from the Emperor Hadrian to Eric Bloodaxe – and all left their imprint on the city. An extraordinary range and richness of both Roman and Viking remains are ready to be explored.

It was in AD71 that the Romans founded York (known to them as Eboracum), whilst on a conquering raid into northern Britain. Governor Petilius Cerialis had an earth rampart and fortress erected at the confluence of the Foss and the Ouse. It grew into a 50-acre (20-hectare) fortress, with massive limestone walls, gateways and watchtowers.

Roman York must have presented an impressive sight. Two modern streets, Petergate and Stonegate, follow the Roman street pattern and some 10ft (3m) below the modern city, Roman Eboracum still lies buried with its barrack blocks, houses and bath buildings.

At the heart of the Roman city was the colonnaded forum of the legionary headquarters, now buried deep beneath the cathedral. From here Roman authority held sway over northern Britain – and at times over the whole Roman world when emperors were in residence, such as AD208, when Emperor Septimius Severus established his Imperial Court here. Eboracum’s importance was further emphasised in 306, when the reign of Constantine the Great began in the city: he was proclaimed emperor by his soldiers following the death of his father, Constantius. Both had been in England at the time.

Today, the only above-ground evidence of what Roman York must have looked like is the Multangular Tower in the Museum Gardens. But over the years countless excavations have uncovered statues, gravestones, Roman walls, towers, barrack blocks and other relics which testify to the power and status of the city. A public house in St Sampson’s Square, for example, has a glass panel in the floor so visitors can look down into a Roman bathhouse. Many finds have been discovered by workmen, such as the remains of a Roman column,  found beneath York Minster by builders working on the Central Tower. Even more unexpected was the discovery of a Roman sewer under Church Street.

The start of Constantine’s reign might well have represented a high point for Roman York, for in the latter years of the 4th century the city gradually declined, with a decrease in trade, and a shrinking in the population. By around 410, the Romans had left York – and Britain.

Historians still debate what happened to Roman York after the legions left. The Saxons had a trading post on the riverbank (confirmed by excavations when a new hotel was built in Fishergate) and then the Vikings sailed up the Ouse – settling outside the walls of the decaying city.

The wooden walls of Viking homes were found in 1979–81 excavations in Coppergate. The moist earth helped to preserve thousands of everyday items, ranging from leather and cloth to a Viking toilet – and its contents. The Jorvik Viking Centre is based on these astonishing finds, which revealed that heather was probably used as Viking bedding, and that Viking York was an important manufacturing centre, with metalworkers, shoe-makers, carvers and cup-makers all plying their trade. It was, of course, the Vikings not the Romans who gave York its modern name – York being a corruption of Jorvik.