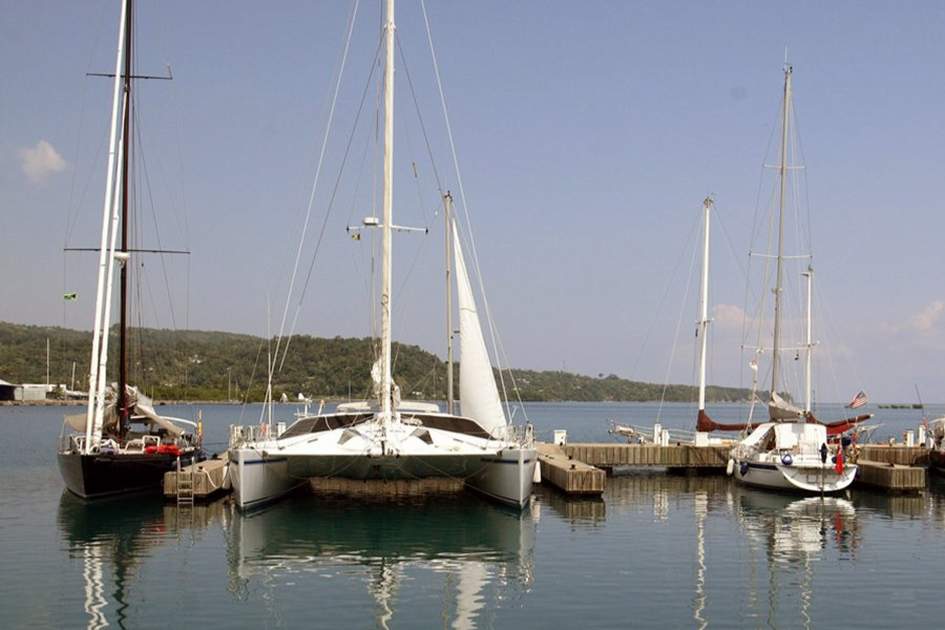 Life on the Ocean Wave

The steady northeasterly trade winds that carried Columbus into the New World have made the Caribbean one of the top sailing destinations in the world.

The image of sailboats cruising in the gentle waters around the Grenadines seems like a dream – quiet sand-fringed bays below rolling hills, rustic harbor towns, and lively beach bars. Visitors from all over the world flock to the Caribbean harbors during winter months, either with their own boats, on bareboat charters, or renting large yachts with a skipper and a crew.

The season kicks off with the arrival of yachts from Europe taking part in the Atlantic Rally for Cruisers just before Christmas in Rodney Bay, St Lucia. The old English seafaring tradition has influenced international regatta competitions in the British Virgin Islands and in Antigua, but you can find yacht clubs on most of the bigger islands organizing inter-island races at different times of the year. For local color,  look out for races between traditional wooden fishing boats, such as at Anguilla’s Carnival in August, or  beautiful schooners, ketches, and sloops built as early as 1909 racing off English Harbour during Antigua’s Sailing Week.

Sailing during the night and fun-filled days spent on different islands: cruises on the luxurious all-inclusive waterhotels are big business. Cruise ships mainly begin their routes in Florida, San Juan, or Barbados and offer guests 24-hour entertainment with a break during the day to explore an island or shop in tax-free malls. Some cruise lines offer themed holidays such as those for gay travelers or even romantic novelists.

Its All in the Game

When visiting the Carib Territory in Dominica you will see large wooden canoes carved out of a single tree trunk. These are identical to the canoes used by the tribes on their migrations from the Guianas and the Orinoco basin northward up the island chain centuries ago. They also used them when they went to war and for fishing. They were skillful at killing fish by using spears or by throwing branches of matapisca – the local name for the Jacquinia tree – into the sea, which would slightly paralyze even large fish, but didn’t harm humans. They also caught fish using baskets, nets, or lines; fish and shellfish were their main source of protein and most of their settlements were close to the sea.

Today, big-game fishing enthusiasts fight tuna, marlins, and wahoo while strapped to comfortable seats on motor boats. Equipped with special rods, private charter boats offer day-trips on many of the islands, or you can book a whole week’s adventure on the waves. Smaller companies also provide angling gear, but the tale of the blue marlin or grouper that got away is up to you.

The seafaring poet John Masefield once wrote, “All I ask is a tall ship and a star to steer her by,” thus capturing the romance of tall ships. If tall ships still tug at the heart it is because they tap into the romance of the great age of sail, when tea clippers such as the Cutty Sark plied the seven seas. The quintessential tall ship is the clipper, which enjoyed mastery of the seas from 1850 to 1875. Compared with its rounded, low-masted predecessors, the sleek clipper had a long waterline and narrow design build, allowing it to sail faster and closer to the wind.

In 1866 the Thorbecke, a fast Dutch merchant clipper, sailed from the Netherlands to the Dutch East Indies in a record 71 days. Braving the perils of shipwreck, pirates and enemy fleets, the clippers would transport cargoes of sugar, spices, rum and coffee from the Caribbean colonies to Europe. Although the clippers struggled to survive the age of steam and the opening of the fast Suez Canal route, tall-ship replicas still sail Caribbean waters today.

Set against the bleached Caribbean light, these square-rigged windjammers conjure up an era of buccaneers and buried treasure, exotic cargoes and distant ports of call. These latter-day tall ships, often lofty four-masted barquentines, make voyages similar to those by ships following the spice routes of several centuries ago, while other majestic replica clippers, such as Stad Amsterdam, can be chartered by wealthy modern adventurers.

Life of the Limey

The sense of seafaring continuity is most apparent in Antigua’s picturesque English Harbour, where Nelson was based from 1784 to 1787 as captain of hms Boreas, a three-masted, fully rigged frigate. In Nelson’s day, life on board a tall ship was one of considerable hardship. While officers’ quarters were acceptable, the crew slept in hammocks strung into netting around the deck; these formed a protective barrier during battle, and could be used as life rafts. On a typical tall ship’s voyage, lunch was fish stew or salted pork or beef while supper consisted of weevil-infested biscuits and red worm-infested cheese. Depending on supplies, drink was beer, brandy or rum.To combat scurvy, the British sailors were given fresh fruit, lemon or lime juice, hence the nickname “limeys” given them by the Americans.

In the British navy, the punishment for drunkenness was a flogging with the cat-o’-nine tails – a nine-tailed whipping device – a punishment abolished only in 1879. Since 12 lashes would normally remove the flesh from a man’s back, the ship’s surgeon was required to apply salt or vinegar as an antiseptic. For a serious offence, such as desertion or striking an officer, the seaman would be “flogged around the fleet”: after being tied in a crucifix position, the hapless -culprit was flogged on every ship in the fleet.

A more romantic way of recalling the era of tall ships is to try a tall-ship cruise with Star Clippers or Sea Cloud Cruises, both of which operate elegant, replica clipper ships in the Caribbean, or to sail on a more contemporary vessel that has the look and feel of a sailing ship, including sails, but is powered by engines, such as the three Windstar Cruises ships or those belonging to the French line Compagnie du Ponant.