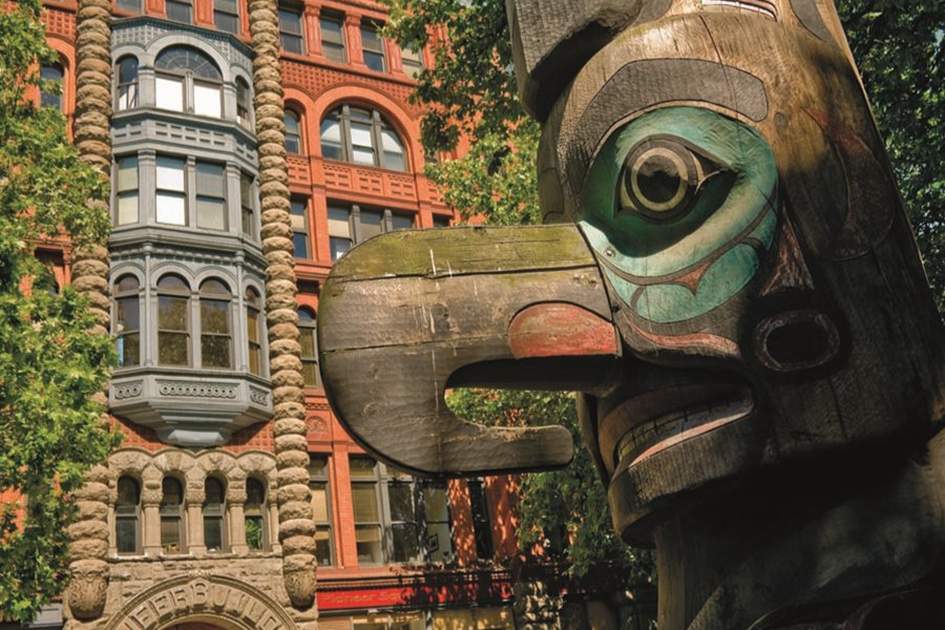 Seattle is one of the fabulous destinations on our Northern Route road trip. Discover the city's local heritage and learn more about the region's fascinating totem poles.

Northwest Indians are carvers by tradition, and the totem pole is one of the more notable of their crafts, with the practice ranging from the Puget Sound area north to Alaska.

The natives of British Columbia and Alaska, however, were the first to carve them. The history of these works is surprisingly brief, for it wasn’t until the mid-1700s, when European explorers first encountered these remote people, that the unique sculptures began to appear. Although the local tribes were already expert carvers of canoes, tools, long-houses, and furniture, they lacked the iron tools necessary to fell a massive tree in one piece and carve its length.

With the iron axes for which they traded, the coastal tribes could now take advantage of the trees that grew so tall and straight in their wet climate. Initially, the poles were made to stand against the front of a home, with figures facing out and a door cut through the base, so all would enter the house through the pole. In these cases, the totem pole functioned as a family crest, recounting genealogies, stories, or legends that in some way identified the owner.

Poles served the function of recording the lore of the clan, much like a book. The top figure on the pole identified the owner’s clan, and the succeeding characters (read from top to bottom) tell their stories. There is a story behind almost every image on a pole. If a legendary animal – Raven, the trickster, for example – had the power to transform into, say, a person, then the carver would depict Raven with both wings and limbs or with a human face and a raven’s beak.

Towards the end of the 1800s, the poles stood free on the beach or in the village outside the carvers’ homes. Some villages were virtual forests of hundreds of poles. The family that carved the pole held a potlatch (ceremony) with feasting, games, and gift-giving. These gatherings were costly and required a great deal of preparation and participation. The custom frustrated white men trying to “civilize” the tribes, especially local missionaries, who solved the problem by chopping down the poles. Employers, too, complained that their Native American workers were unreliable when a pole was being carved or a potlatch planned. Eventually, both the Canadian and United States’ governments banned potlatches, and pole carving nearly died out. (The ban was finally lifted in the 1950s.)

Learning to read – and appreciate – totem poles is like learning to read a language. The poles speak of history, mythology, social structure, and spirituality. They serve many purposes, for both individual and community, and continue to be carved by descendants of the original carvers.

To read more about what to see in the United States, visit our USA destination pages. See also our guide to the Northern route from east coast Boston to west coast Washington state.