The streets of Madrid are adorned with sprayed, drawn and painted images. A stroll through the city reveals outstanding urban artworks speckling its barrios, from playful road signs and controversial pieces to avant-garde spaces and grand murals. Here is our guide to the best street art in Madrid. 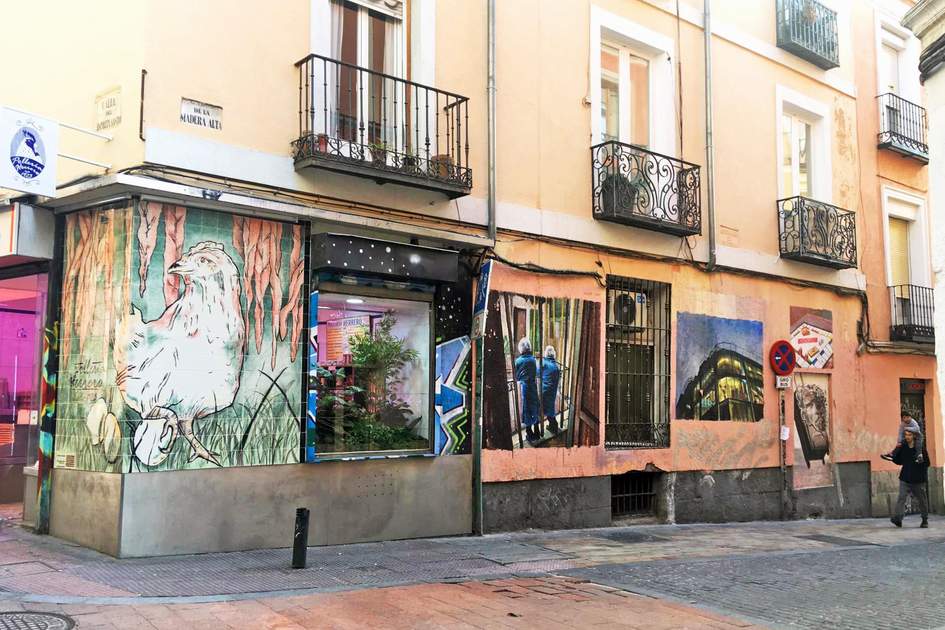 What is street art?

Street art or urban art covers a diverse spectrum of public art, everything from illegal graffiti tags and ‘throw-ups’ sketched out in haste before the police arrive, to high-quality murals commissioned by shops or city councils to transform public spaces. Artists use spray paint, brushes, marker pens or bare hands to mark shapes on dusty surfaces – an endless variety of styles are on display in Madrid’s streets. Artworks here are ripe with social and political comment: protests against oppression, gentrification, domestic violence, religious hypocrisy and police brutality, as well as calls for social inclusion and positive messages about community.

Local and international artists have been painting Madrid since the Movida Madrileña movement of the 1980s, when young people began rediscovering their freedom after the Franco dictatorship ended. Muelle was one of the pioneers of urban art at that time, when he began tagging his trademark arrow signature around the Campamento neighbourhood. Suso 33 is another famous Spanish artist whose most impressive works include the shadowy figures at Plaza del Poeta Leopoldo de Luis. Other street artists who have made their mark here include Borondo, SpY, Ángel Aragonés, Okuda and Jonipunto, as well as the 11-strong international collective Boa Mistura. 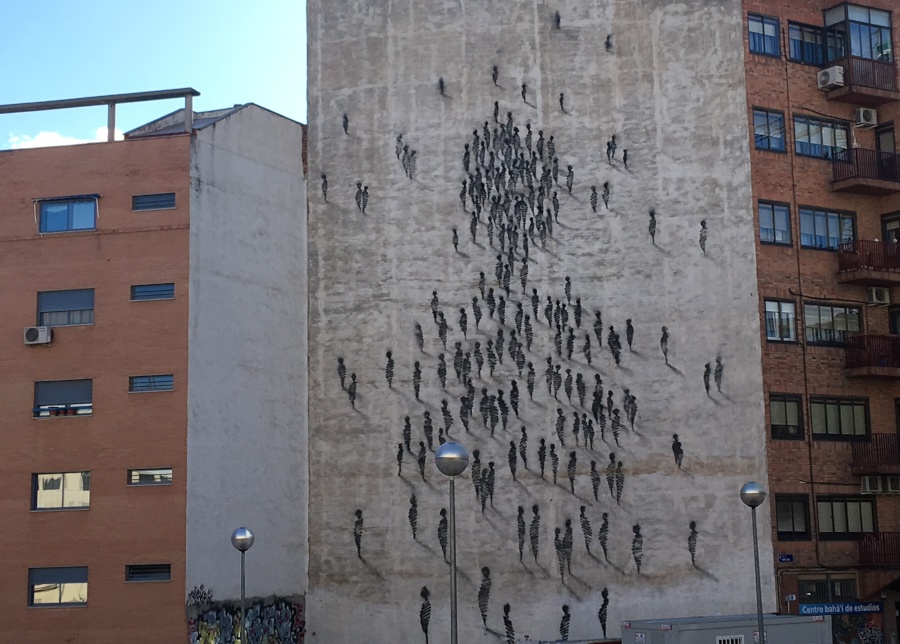 One of richest areas in Madrid for street art is the central Lavapiés neighbourhood. A large immigrant population gives the area its distinctive character, with shops selling Turkish sweets and Moroccan leather, while African vendors vie for trade outside. This multiculturalism is reflected in the urban art of the district. Check out Esta es Una Plaza, a community garden on Calle Doctor Fourquet, 24, where the exterior walls have been decorated with vibrant designs celebrating the world’s nationalities.

A new artwork appeared in the area at La Plazoleta de Cabestreros in February 2019. A 3-D monkey by Okuda and Portuguese artist Bordálo leaps from the corner of a building. Half its face incorporates the rainbow colours of an Okuda mural that previously occupied this spot, while the other half is a composite of recycled materials.

Much of the art in Lavapiés is politically charged. On a bright yellow wall at 19 Calle Embajadores the back of an African man framed by barbed wire pays tribute to a Senegalese street vendor Mame Mbaye whose tragic death at this spot in March 2018 sparked the Lavapiés riots. The tag reads ‘A todos nuestros vecinos sin derechos’ (‘To all our neighbours without rights’).

This 19th-century tobacco factory is the city’s urban art epicentre. For more than 170 years the Tabacalera was an industrial space where female factory workers packed tobacco and campaigned for their rights. It’s appropriate, then, that the Tabacalera continues to make voices heard through art. In 2003, the then abandoned building was converted into a contemporary art gallery and street art space. Venture below ground to explore El Keller, a network of tunnels which has become an experimental playground for graffiti artists. Outside, the walls of the Tabacalera have been spruced up by the 2014 Muros Tabacalera project, featuring designs by 32 urban artists.

The countercultural Movida movement sprang up in the 1980s in the Malasaña district, which subsequently became a natural home for the emerging street art scene. There’s ever-changing art to view around Plaza del Dos de Mayo and on Calle Galería de Robles. Head to Plaza Callao to see geometric works by Nuria Mora and El Tono, and keep your eyes peeled for striking stencil portraits by Parisian graffiti artist C215, paintings by fine artists Cassassola Raúl Muñoz, and bars on gates and windows pimped up by E1000. Yipi Yipi Yeah creates inclusive art for everyone. His work, which is prevalent around Malasaña, includes discreetly placed plaques and road signs adapted with light-hearted socio-political statements. 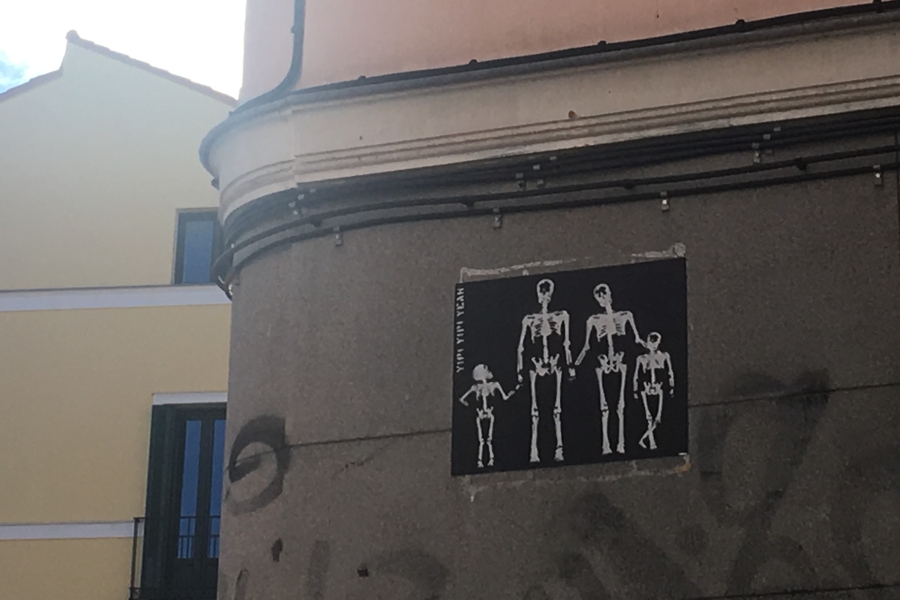 There is also plenty of graffiti activity in Madrid suburbs such as Tetúan, Usera and Vallecas. Venture away from the centre by train and you’ll spot plenty of tags and throw-ups beside the railway lines by groups including Ron’s Crew, Farlopa, Kors and Monge, to name a few.

There are many large murals too. In Tetuán, perhaps the most visually arresting is a piece by Borondo on Calle del Marqués de Viana 52: a man and a woman, painted side by side across two buildings, have their hands tied behind their backs. Meanwhile, SpY – Spain’s answer to Banksy – has installed 150 fake security cameras on a building in Calle Las Almortas, which he describes as ‘a reflection on the daily interaction with technology and those behind it.’ 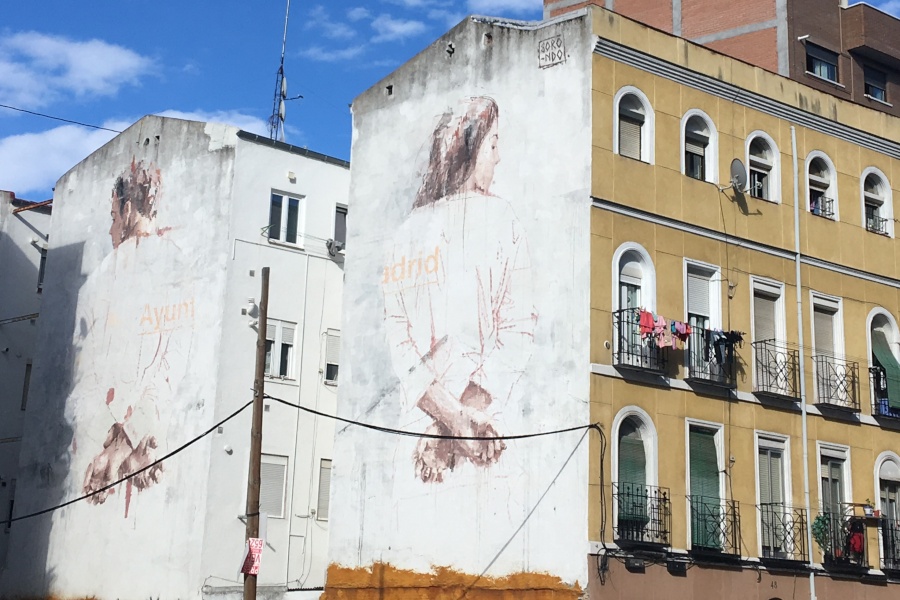 In Vallecas, you can see El Espiritu de la Montaña by Barcelona-born artist Sixe Paredes, and strange animals by the Argentinian artist Franco Fasoli. Around Madrid’s Chinatown in the Usera neighbourhood, street art is thriving – look out for Inside Usera, an impressive mural by Laguna.

Although Madrid’s urban art is there for everyone to discover, a great way to learn about the artists and the messages in their works is by taking a guided tour. Cool Tours Spain run street art tours by bike and on foot around Lavapiés and Malasaña. Street art workshops are also available at which you can try your hand and find out whether you could be the next up-and-coming graffiti artist...

Ready to take a trip to Madrid?

Insight Guides can help you plan and book fantastic trips to Madrid and other cities in Spain. Simply get in touch with us to share your ideas for the trip and let us know when you would like to travel. Our local experts will then create a personalised itinerary to your specific requirements, which you can amend until it's exactly how you want it before booking. You can browse our existing itineraries for inspiration, and keep in mind that they can all be tailored to suit your needs.