Tagines and pastilla: a guide to Moroccan food 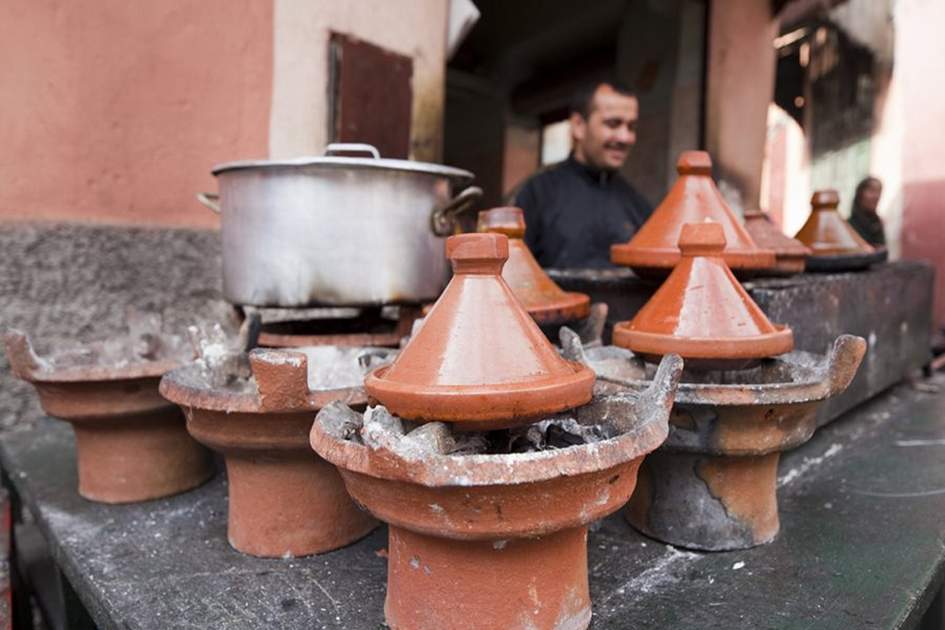 Moroccan cuisine has influenced top chefs and restaurants all over the world, but you’ll never find it as tasty or as subtle as the food served up in a Moroccan home.

Essentially, Moroccan cooking combines the desert nomads’ diet of mutton, vegetables and dairy produce with more refined and exotically spiced specialities introduced in Morocco at the time of the Arab conquest. But over the centuries it has also incorporated other influences: southern European (olives, olive oil, fruit, tomatoes), sub-Saharan African, and French (particularly apparent in the country’s Westernised restaurants).

The best Moroccan food is found in the home. The average Moroccan will rarely eat “out” except perhaps at one of the many simple restaurants found in every town, where grilled brochettes (kebabs of marinated chicken or lamb), basic tagines, spicy merguez sausages  and kefta (grilled minced lamb) are served.

There are, however, a growing number of high-end restaurants catering to tourists, particularly in cities like Marrakech, that reflect the rich range of Moroccan cooking. Some are resolutely traditional, while others serve up more innovative and contemporary reworkings of typical Moroccan classics, influenced by the growing number of European (particularly French) and European-trained Moroccan chefs working in the country.

Couscous is regularly cooked at home, usually on a Friday, the Muslim holy day. A mound of steamed grain topped with chicken, lamb, beef or vegetables, it is traditionally served at the end of a meal, although these days it is more likely to be a meal in itself. A garnish of fried onions is often added, while almonds and raisins may also be scattered on top of it.

The famous Moroccan tagine comprises a stew of beef, chicken, lamb or just vegetables slowly cooked in the eponymous earthenware dish with a conical lid. More elaborate tagines add additional spices and ingredients, typically fruit, such as barrogogbisbasela (lamb tagine with prunes and almonds), safardjaliyya (beef tagine with quinces), or sikbadj (lamb with dates and apricots). Olives are also frequently added, while citrus-flavoured tagines cooked with lemon are also common. Tagines are typically made of solid clay (aficionados claim that unglazed and unpainted tagines impart the best flavour), although some of the elaborate examples you’ll see in tourist souks are intended for decorative rather than practical use. Tagines are traditionally slow-cooked over a low, even charcoal fire. The tagine’s conical lid traps steam, which then condenses and falls back into the pot, meaning that only small amounts of water are needed to create tender stews.

The other popular everyday meat is chicken, or djej. Classic dishes include matisha mesla (chicken cooked in tomatoes, honey, ginger and cinnamon) and djej bil loz (chicken with spices and almonds), although you’re more likely to encounter simple chicken brochettes roasted over an open charcoal fire or the ubiquitous servings of rotisserie chicken which can be seen slowly turning and browning in cafes across the country.

Fish restaurants are found along the Mediterranean coast, from Tangier to Ceuta, and the length of the Atlantic Coast. Oualidia on the Atlantic is famous for its oysters, as is Dakhla, in Western Sahara. Huge araignéedemer crab and oursin (sea urchins) are often found in season in Essaouira and Oualidia, and giant prawns caught off Agadir, octopus, squid, boned and stuffed sardines, skate and sole are available at the most modest quayside restaurant: in particular, check out the food stalls set up each morning on the harbours of Agadir and Essaouira.

Inspired to go? Buy one of our Morocco guides today.

We had a fantastic trip! Both the guide and the driver were wonderful! They made us feel safe throughout the trip and they were very accommodating to our needs, tailored the schedule to our liking. They were both funny and easygoing. We ended up doing... Read more