Thaipusam at the Batu Caves, Malaysia 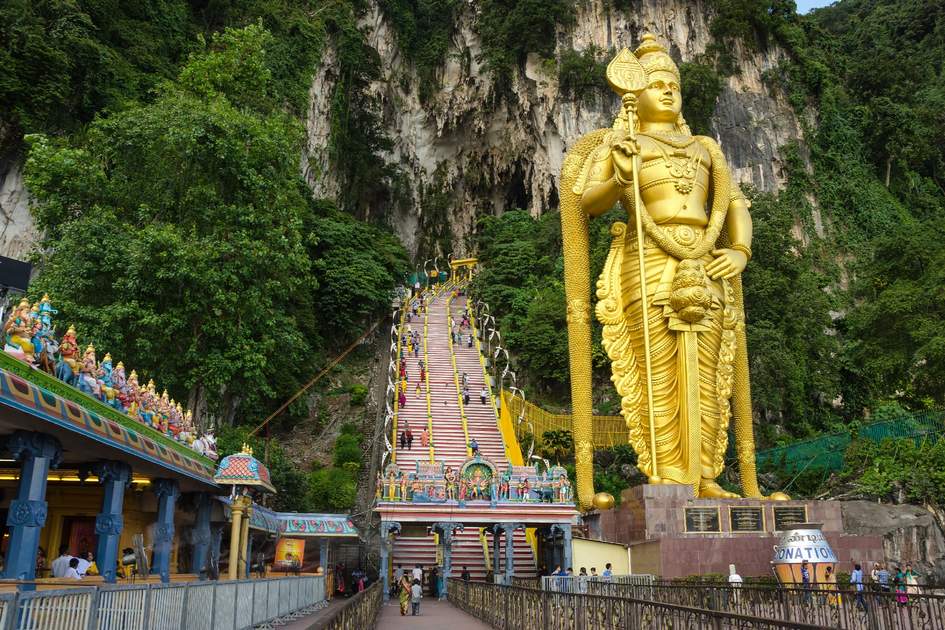 The giant Batu Caves are a popular excursion from the capital city of Kuala Lumpur in Malaysia. Set in limestone cliffs hidden in the forest, they were "discovered" in 1878 by a group of explorers. The caves were even a hideout for anti-Japanese communist guerrillas during World War II. Now transformed into a Hindu shrine, they receive the most attention during the Thaipusam Festival, a Hindu festival that celebrates the victory of good over evil that took place on the 24th of January this year.

This is a moveable Hindu feast, celebrating the triumph of good over evil, in this case, depicted as Lord Murugan receiving a sacred spear with which to vanquish the sources of evil. It is celebrated mostly by Tamil Hindu communities. Every January or February (depending on the moon) thousands of Hindus gather to do penitence for past sins. The most fervent of them punish themselves by having their tongues or cheeks pierced with skewers, and hooks inserted in their bodies. Some also carry a kavadi (a frame bearing peacock feathers and statuettes of deities). Some simply carry jars of milk, rose water, coconut or sugar-cane juice, which are given as offerings. During the Thaipusam festival, as many as 500,000 people will crowd around the Batu Caves.

For tourists, the climb in humid heat up nearly 300 steps to the cave-shrine entrance may be penitence enough. There are, in fact, dozens of impressive limestone caves attracting botanists and zoologists to study their unique flora and fauna, but only three are accessible to the general public. At the top of the 272-step staircase is the Temple Cave, the most breathtaking of the three, with its architectural columns of lofty stalactites and stalagmites. At the foot of the hill, a bridge over a Koi pond leads to the Cave Villa, with three indoor galleries – the Valluvar Kottam, where verses of the ancient Tamil poet Thiruvalluvar are painted directly on stone tablets; a reptile gallery; and the art gallery, which displays colourful statues of Hindu deities.

Get me there: Traditional Malaysia and Wild Borneo