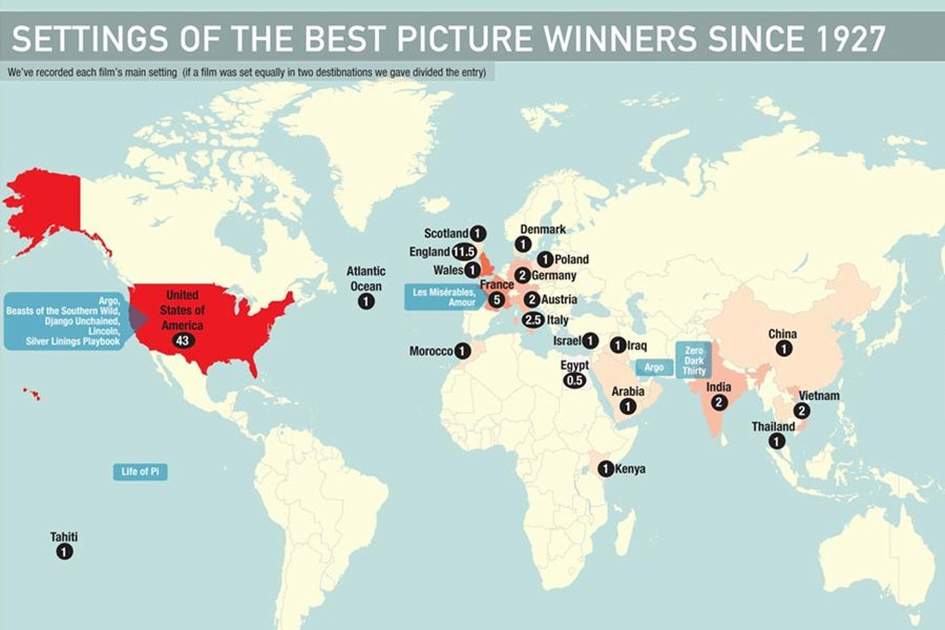 It's OscarTM time and the excitement is building across the globe as we draw closer to the opening of the golden envelopes on the Dolby Theater stage in Los Angeles. Here at Insight Guides is no exception, as we eagerly await this week's Academy Award announcements with heated debate as to who will emerge clutching an Oscar for the Best Motion Picture.

As we're always thinking about travel, we decided to see if where in the world each movie is set would have any bearing on the result. Where have winning films been located in previous years? Could this help with our predictions?

Our cartography team gathered together all the previous winners of the Best Motion Picture category and plotted them on a map to see if there are any noticeable trends. You can download the map here.

Looking at the map, it's clear that films set in USA dominate the Academy Awards, with 43 winners. Only England comes close with 11 winners. And this is perhaps no surprise as these are traditionally awards for the Hollywood Studios.

But an interesting precedent could be set if Life of Pi wins. What with Titanic winning in 1997, could it a second success for a film set in the middle of an ocean?

France appears twice in this year's list, with strong entries set on its soil – Les Misérables and Amour.

War films always seem to storm the Academy Awards, and the sucess of Argo or Zero Dark Thirty would increase the haul of winners based in Middle Easten conflict – alongside The Hurt Locker (2009) and Lawrence of Arabia (1962).

But based on our map, we feel there is a very strong chance of an American set film romping home. What's more, although last year's winner, The Artist, was set in the USA (despite being a French film), the three years prior to this have all seen winners set elsewhere (India, Iraq and England). Probability-wise, it seems that this year will see a return to an American film set in an American location, which would narrow the field to Argo (although mostly set in Iran), Beasts of the Southern Wild, Django Unchained, Lincoln and Silver Linings Playbook.

So, here we go - our predictions for the big four awards - largely ignoring the would-be advice from our map above:

Best Actor in a Leading Role: Daniel Day-Lewis for Lincoln

What do you think? Have we got it dead wrong? Leave a comment below and let us know who you think will win.

This year's full list of Best Picture entries and their settings

Beasts of the Southern Wild (USA)

Article and map by James @ Insight

This February we're exploring sunny Sri Lanka as our destination of the month. For more updates keep following the Insight blog, or check us out on Twitter @InsightGuides or on our Insight Facebook page, or why not look at some lovely travel photography on Pinterest.