The Best of England 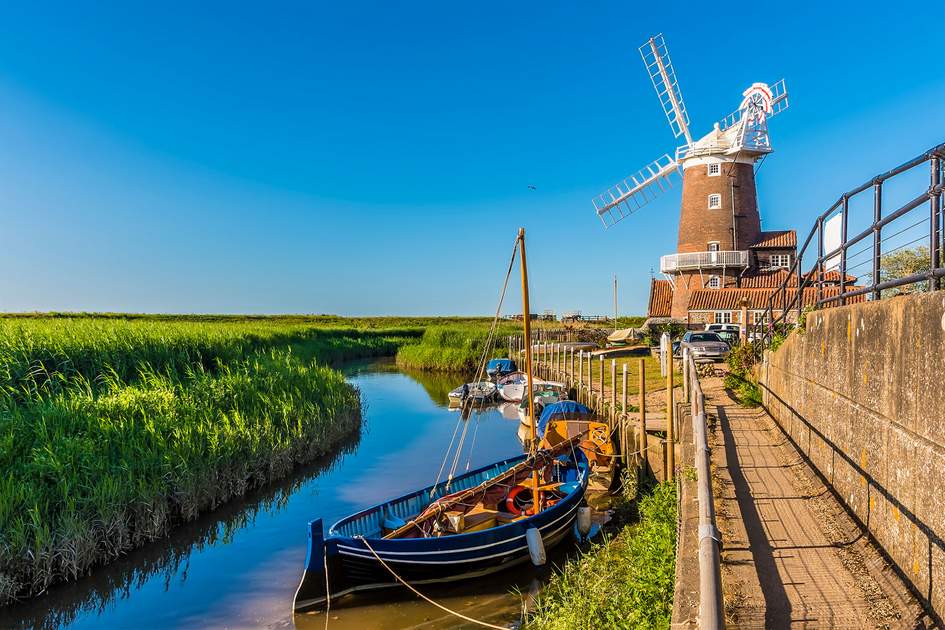 From rolling green hills to historic cities and tremendous beaches, England is every bit as charming as the guide books would have you believe. Stone walls and thatched cottages are still found in quaint villages, while lonely windswept moors and spectacular views aren't in short supply, either. From the Lake District to Norfolk and Suffolk and the cultural heavyweights of York and Oxford, here are the best places to visit in England and how to enjoy them.

England is a compact country, with a reliable railway network and well-maintained roads. The good news is that means you can take in plenty of the best places in England to see on a single trip.

If you're wondering where to go in England and want a holiday spent outside, make for Devon and Cornwall. Many miles of wonderful coastal scenery, spectacular beaches, wild moorlands and great gardens make this the place to be outdoors. And don’t leave without trying Cornish pasties – traditionally filled with chuck steak, turnip, potatoes and onion, these are the real deal.

What to see and do in the area: The Eden Project is Cornwall’s most popular attraction, while at Tate St Ives, you can see the painting and architecture the landscape has inspired. Torquay is an elegant resort with perfect examples of Edwardian seaside architecture, while the handsome Devon town of Dartmouth is the pride of the Navy. Exeter has a majestic Cathedral and nearby Topsham is the perfect place to while away the hours in antique shops.

Where to stay in Devon and Cornwall: In Cornwall, be sure to visit the charming town of Padstow, built around a medieval harbor. Book into the Old Custom House, with light, elegant rooms and fresh seafood served in the on-site restaurant. If you're enjoying the countryside in Devon, meanwhile, bed down at Kentisbury Grange, a restored Victorian country house with four stars, luxurious bathrooms and attentive service. They also have self-catering bungalows should you want more of your own space. 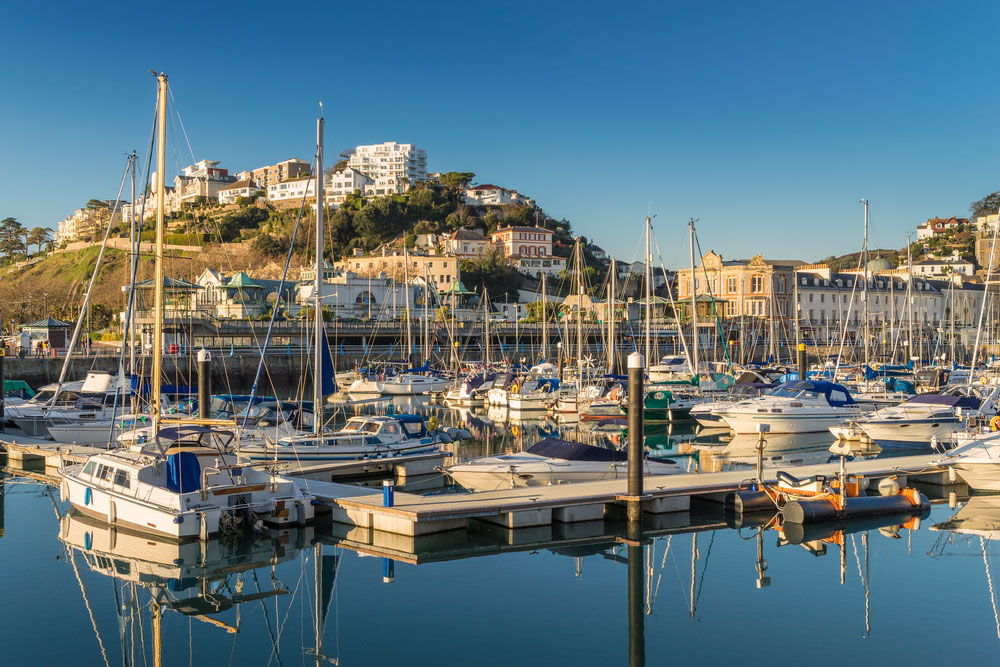 Well loved, well walked and wildly romantic, the Lake District is one of the best-known corners of Britain. The glaciated landscape is home to many a spellbinding lake and challenging climb, while picturesque villages host traditional inns and cosy tearooms for recharging the batteries. Creatives will muse on scenes that once inspired the Lake Poets – Wordsworth, Coleridge and Southey – as well as enjoying a clutch of small local art galleries. In terms of local delicacies, Cumbria is renowned for the quality of its pork – be sure to sample some sausages or pork pies – and don’t forget to put a bar of Kendal Mint Cake in your rucksack before you set off into the hills.

What to see and do in the area: Setting off on long walks and taking in the glorious scenery is what the Lake District is all about. From Wast Water, the most austere and spectacular of the lakes, to Lake Windermere, the ideal leisure lake, the beauty of Lake District is breathtaking. Its literary heritage is impressive too – from Dove Cottage, once the home of William Wordsworth, to the enchanting World of Beatrix Potter.

Where to stay in the Lake District: The King's Head is a gorgeous 17th-century coaching inn with cosy, well-decorated rooms, a real fireplace and a store selling local produce. If it's eye-watering luxury you're after, plump for Low Wood Bay on the shores of Windermere, with world-class facilities including a pool, spa, steam room and fitness suite. What better place to rest those feet after a mighty walk? 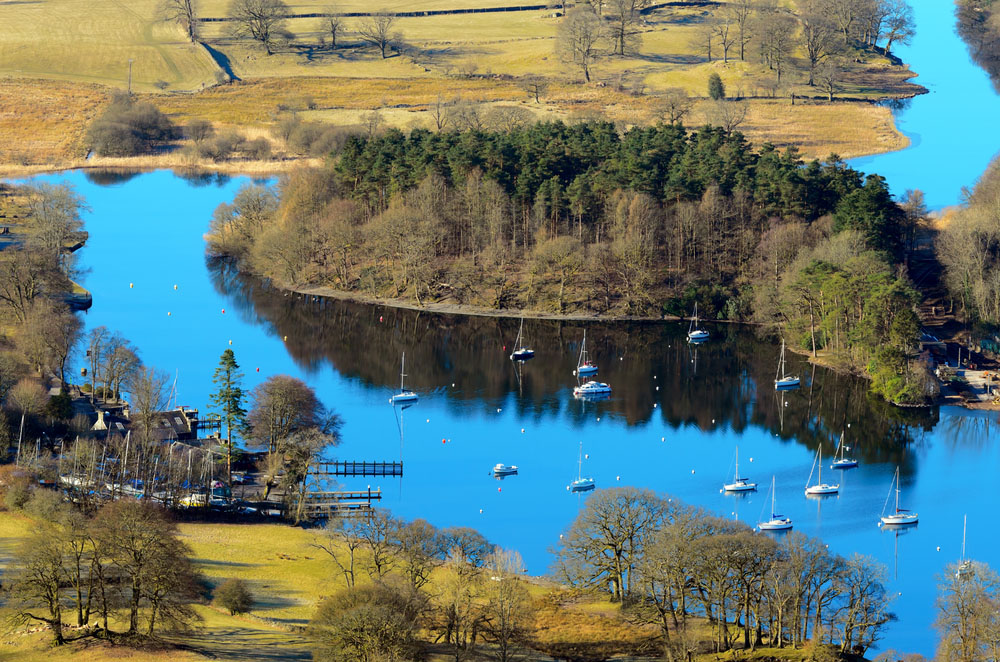 This quintessentially English area of rural Britain is peppered with stone villages tucked into lush river valleys and graced with elegant, historic towns. Many of the settlements date back to the 14–16th centuries, with gorgeous architecture and reams of tearooms and antiques shops. Then there's Stratford-upon-Avon, birthplace of England's most famous playwright. Foodies will find excellent dairy products in the Cotswolds, from home-made ice creams and yoghurts to local cheeses such as Single and Double Gloucester and North Cerney goats’ cheese.

What to see and do in the area: Chipping Campden and the Slaughters are almost too beautiful to be true, while Snowshill Manor is surrounded by gardens inspired by the Arts and Crafts movement. For lovers of all things Shakespearean, Stratford-upon-Avon is a shrine to the immortal bard. Cheltenham is noted for its shopping and Regency splendour, while Gloucester is renowned for its sublime cathedral and historic docks. The stunning National Arboretum at Westonbirt was planted in the 19th century and is a celebration of trees from all around the world.

Where to stay in the Cotswolds: There are plenty of swanky hotels in the well-heeled Cotswolds; our pick of the bunch is Ellenborough Park, set in sweeping countryside. You'll find a luxury Indian-themed spa, fine dining and spacious rooms inside this grand old country estate. For something a little more down to earth, book a room at The Stag at Stow, which has clean, slick rooms and a garden. In Cheltenham itself, make for boutique No131 The Promenade, with beautifully decorated rooms, a seasonal restaurant and a chic cocktail bar inside a gorgeous Georgian townhouse. 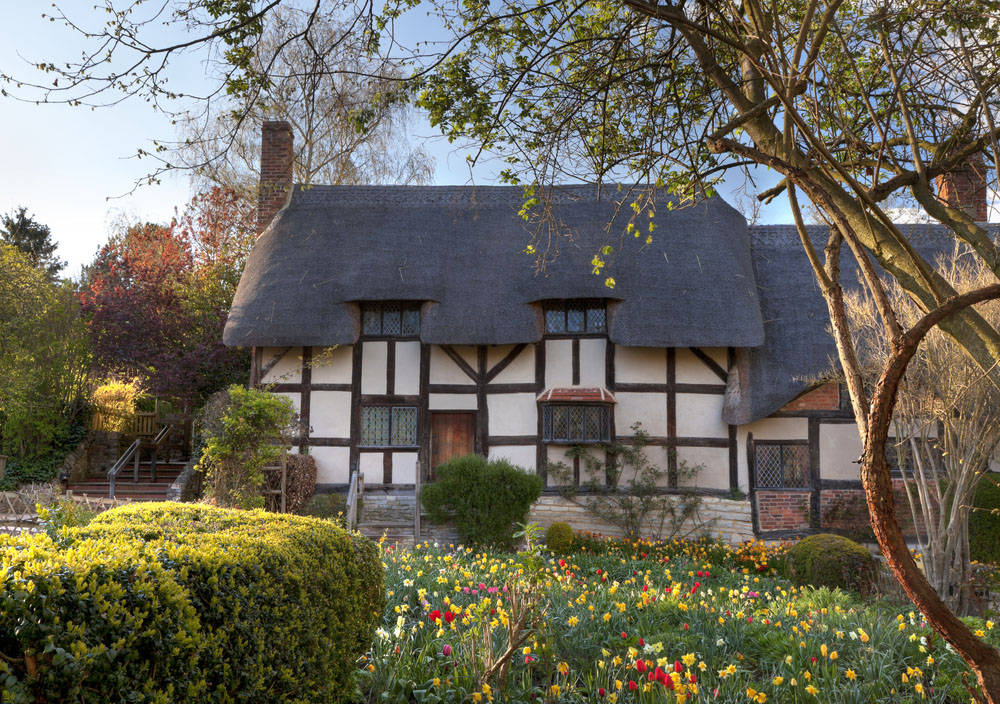 Big skies, beaches, boating, and birding make Norfolk and Suffolk a haven for outdoor enthusiasts, but they also offer historic churches, fine dining and cosy pubs. If you're after a local delicacy (beyond tucking into battered fish and chips on the beach), don't miss the sweet, tender Cromer crab which is justly famous – try the dressed crab at Davies Fish Shop in Garden Street, Cromer.

What to see and do in the area: Hire a boat for the day and explore the Norfolk Broads, take a boat trip to see the Blakeney seals, or seek out birds and other wildlife at Minsmere RSPB Nature Reserve. The magnificent Ely Cathedral towers above the Fens, while Sutton Hoo is the fascinating site of an Anglo-Saxon burial ship.

Where to stay in Norfolk and Suffolk: The Hoste, a boutique with private rooms and self-catering cottages in the quaint village of Burnham Market in Norfolk, really does have it all. Award-winning restaurant? Check. Luxury spa? Check. Private 20-seat cinema? Right on. Over in Suffolk, head for the historic Swan Hotel & Spa, which combines comfort and modern amenities with sensitive restoration that has kept the building's original oak beams, open fireplaces and even a minstrels' gallery. 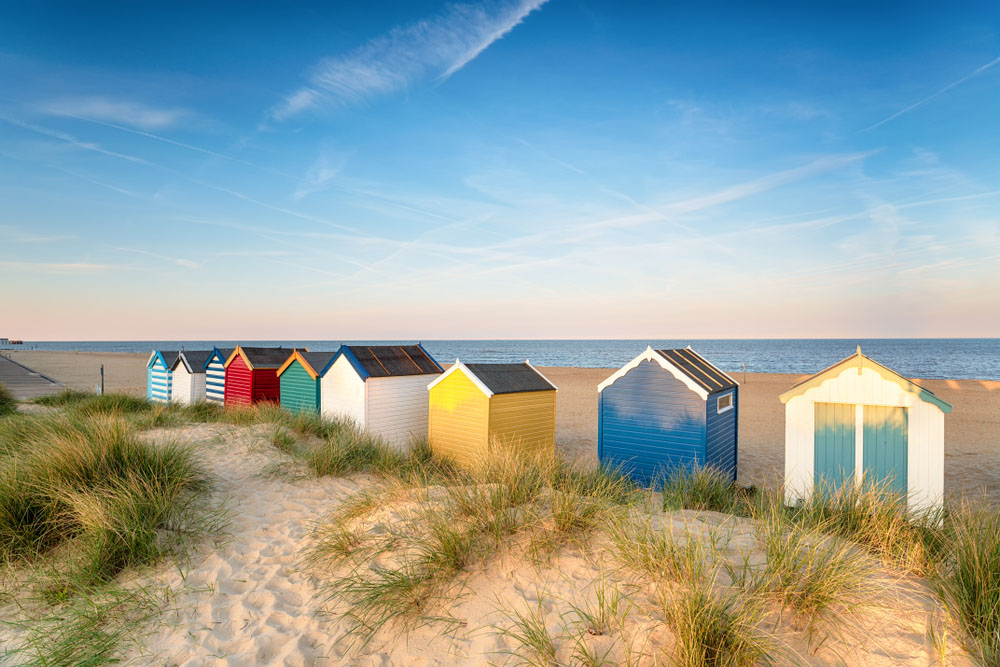 Magnificent Georgian architecture, historic attractions, modern spa facilities, and a host of cultural festivals… there are plenty of reasons why Bath is one of the few cities to have achieved Unesco World Heritage Site status. From its gorgeous Abbey to the famous spa where you can still take to the waters, the city has lots to recommend it. But one of the simplest pleasures is simply strolling its handsome Georgian streets. To break up your walk, Sally Lunn buns have been baked here for centuries and are still available at the restaurant of the same name.

What to see and do in the area: For architecture buffs, Bath is among the best places to visit in England. The Roman Baths are a vivid reminder of exactly what the Romans did for us, and modern-day visitors can soak in the thermal waters at Thermae Bath Spa. Pulteney Bridge is a beautiful bridge-cum-shopping arcade over the River Avon, while the city’s Abbey is where Edgar, England’s first king, was crowned.

Where to stay in Bath: The Kennard occupies a typical Georgian townhouse (dating back to 1794). It's walking distance from the major sites, including the baths, and there are homemade cookies to sweeten the deal. 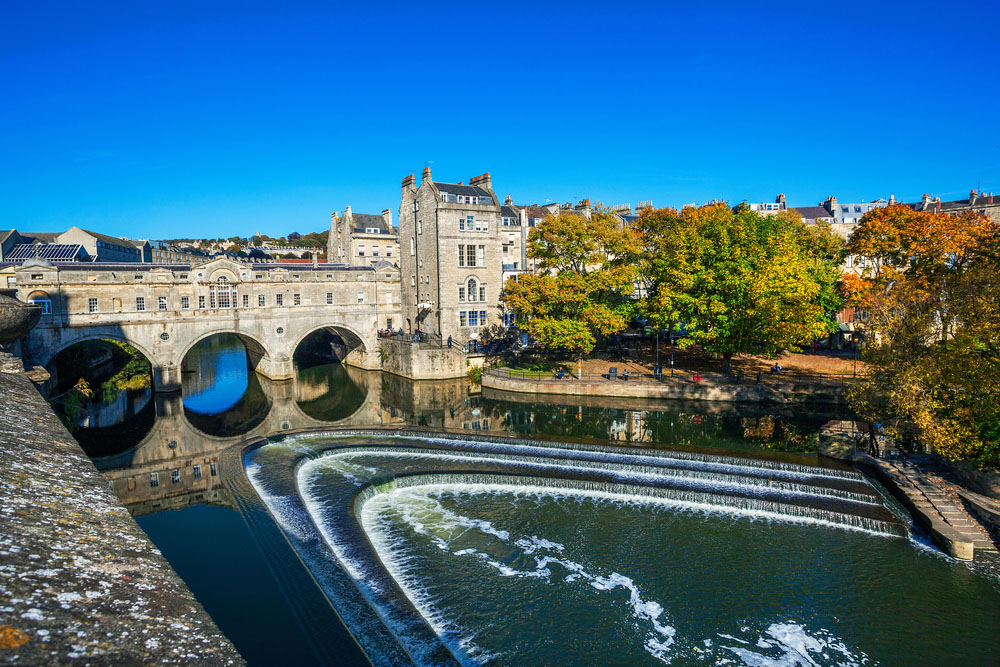 From its awe-inspiring cathedral to its picturesque medieval streets and a recreated Viking world, this charismatic northern city is one of England’s must-sees. For any chocoholics out there, names like Rowntree’s and Terry’s are deeply rooted in York’s social and industrial development and there’s even a Chocolate Trail you can follow.

What to see and do in the area: The glorious medieval York Minster dominates the city, while the City Walls are the longest medieval walls in Europe. Lined with half-timbered buildings, The Shambles are York’s most photogenic street, while Stonegate is one of its liveliest. There’s also plenty to see at the National Railway Museum, the York Castle Museum and the Jorvik Viking Centre.

Where to stay in York: There are plenty of atmospheric places to stay in York. The Churchill is a Georgian property with modern amenities; Judge's Lodging overlooks the famous Minster; while Jorvik house dates back to the 1750s and looks out over the 11th-century church of St Olafs. 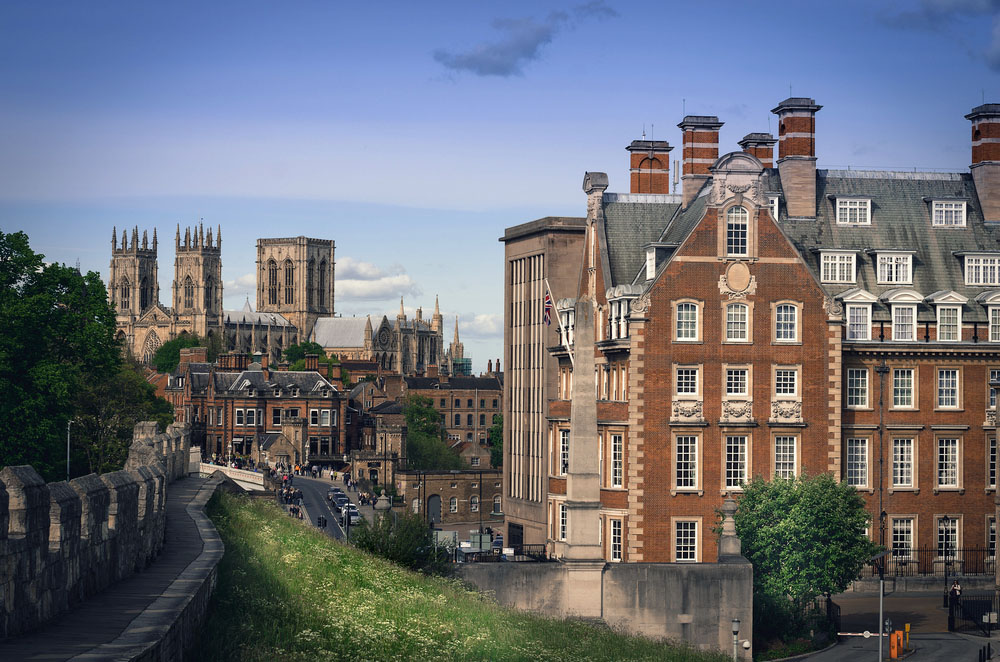 From punting on the River Thames to grandiose historical colleges and the oldest botanic garden in Britain, the ‘city of dreaming spires’ is crammed with inspiring buildings and cultural heritage that make it one of the best places to visit in England. Be sure to save time for a pint at one of the city’s historic drinking holes, such as the Eagle and Child or the Lamb and Flag, both on St Giles.

What to see and do in the area: The city’s landmarks include the Ashmolean Museum (the oldest museum in the country), the Bodleian Library and the Sheldonian Theatre. Christ Church, Oxford’s largest college, is also home to the city’s cathedral, while the University Museum next to Keble College is packed with fascinating natural history exhibits.

Where to stay in Oxford: Both the Vanbrugh House Hotel – expect historic charm and individually designed rooms, including a double with disabled access – and the Bath Place Hotel, a super cosy, 17th-century gem, are good choices in Oxford. 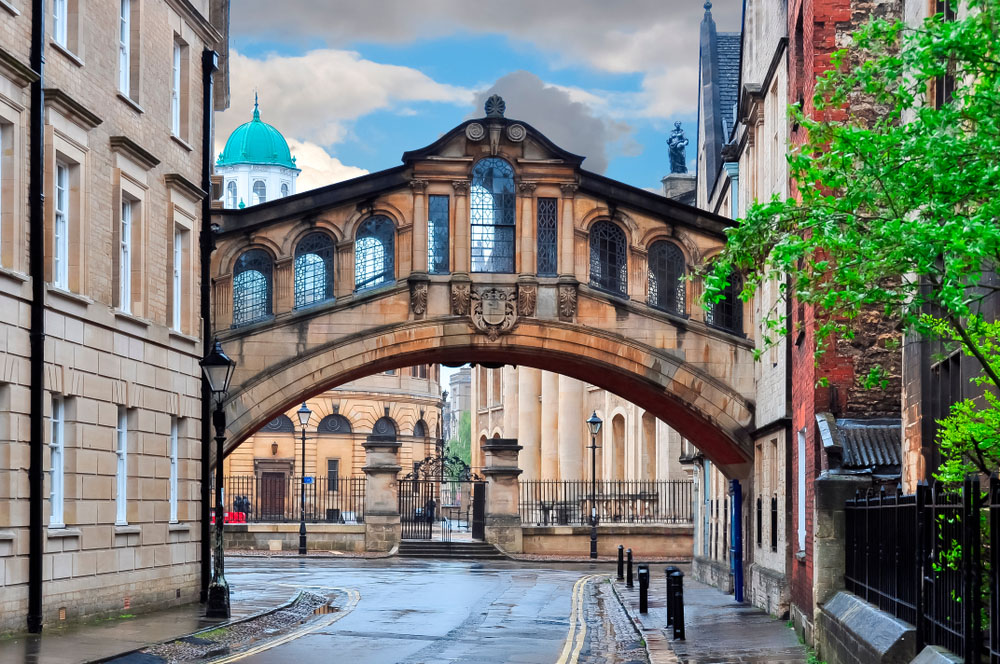 This page contains affiliate links; all recommendations are editorially independent.