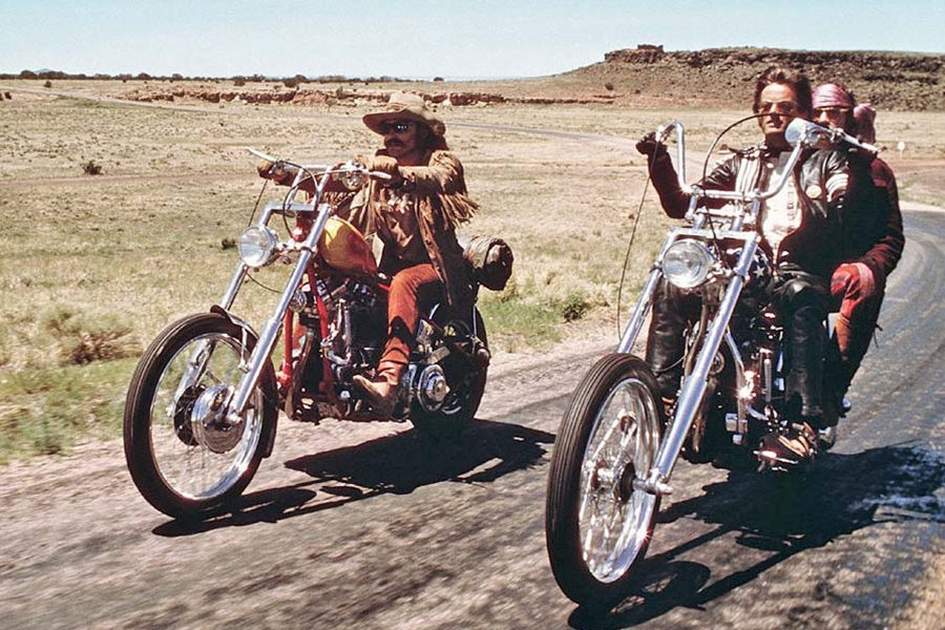 Our theme this month is USA on the road, and nowhere has the USA’s roads seemed more attractive than on the cinema screen. From state parks to theme parks, motels to casinos, and historic cemeteries to the Grand Canyon, film critic Scott Jordan Harris takes us on a tour of some of the best locations from US road movies.

No American road is as legendary as Route 66, and no American road movie is as legendary as Easy Rider, so it is fitting that the heroes of Dennis Hopper’s counter-culture classic follow the famous road for much of their journey. You can begin retracing the travels of Billy (Dennis Hopper) and Wyatt (Peter Fonda) from the moment you arrive in America, if you fly into Los Angeles International Airport (LAX), where the characters complete the drug deal that begins the film. After that, you could spend weeks touring the locations they visit. (You can see their complete route here.)

A particularly memorable moment in the movie occurs at the Pine Breeze Inn [map] in Bellemont, Arizona, where the owner displays a “No Vacancies” sign when he sees the long-haired hippies approaching. The motel still stands but is no longer in use. The “No Vacancies” sign, however, now attracts visitors to the nearby Route 66 Road House Bar and Grill at 11840 West Route 66 [map], where it hangs from the ceiling. If you’ve rented a chopper to cross America in true Easy Rider style, you won’t be out of place at the Route 66 Road House, which is a popular hangout for bikers.

The most shocking sequence in the film, at least for some of the more reserved audiences who saw it on its initial release in 1969, was the drug trip Wyatt and Billy take in New Orleans, Louisiana, at the end of their journey. They freak out among the picturesque tombs of the St Louis Cemetery #1 [map], at 1300 Saint Louis Street, which is one of the city’s famous above-ground cemeteries, built to prevent corpses being washed up out of their graves during floods. If you visit the cemetery, try to behave a little better than Dennis Hopper did: supposedly, he broke the head off one of the statues.

Discounting Route 66, no single location is as synonymous with road movies as Paris, Texas [map], which gave Wim Wenders the title of his slow-burning 1984 classic. The great irony here is that Paris, Texas (a small town in Lamar County in the northeast of the state), doesn’t actually appear in the film. And so, while film fanatics may feel a need to make a pilgrimage to Paris, Texas, there are no film locations to visit once they get there. There is, however, a 20-metre replica of the Eiffel Tower – wearing an enormous cowboy hat.

The town of Marathon, Texas [map], does feature prominently in the film, particularly in the shape of the ten-acre Marathon Motel and RV Park [map]. This provides a place for the movie’s amnesiac protagonist, Travis (Harry Dean Stanton), and his brother Walt (Dean Stockwell), to stay on their travels, and is an ideal location for anyone touring the area to do the same.

Thelma and Louise causes problems for fans hoping to recreate the trip taken by its title characters because so much of its shooting took place in locations other than the ones named in the movie, with Los Angles and Utah often doubling for Arkansas, Oklahoma, Colorado and Arizona. While it isn’t possible to take the same trip we watch the characters take onscreen, Thelma and Louise still gives us some remarkable locations to visit, including the cliff off which the outlaw ladies drive their car in the film’s most famous scene.

This is, as every fan of the film knows, supposedly the edge of the Grand Canyon in Arizona. But in reality it was in Utah’s Dead Horse Point State Park, near the city of Moab [map]. Aside from its spectacular sights and challenging bike trails, the park also offers accommodation: you can camp at its Kayenta Campground for $20 a night.

While many road movies stick to hard-to-recognise locations and small-town scenery, Rain Man includes several visits to more opulent big city locations. The casino at which autistic maths whizz Raymond (Dustin Hoffman) wins big, for example, is Caesars Place, 3570 Las Vegas Boulevard South [map], in America’s capital of kitsch, Las Vegas, Nevada. If you visit the casino, and manage to win as much money as Raymond, you may be able to stay in its “Rain Man Suite”, a palatial apartment that costs around $5000 a night.

A comedy about the road trip taken by an average, if disaster-prone, American family en route to the Walley World theme park, National Lampoon’s Vacation is probably closer to the reality of most American road trips than the epic odysseys undertaken by cool loners and sexy fugitives in the majority of road movies. A parody of Disneyland, Walley World is a fictional park, but the scenes set there were shot at a real one, Magic Mountain Six Flags in Valencia, California [map].

For Brits, it’s easy to think that America only has two theme parks – Disneyland and Disney World – but in fact the US is filled with fabulous theme parks. Magic Mountain is one of the best and one of the fullest: it attracts more than two and a half million visitors a year and 2013 will see the opening of Full Throttle, its eighteenth rollercoaster.

But you can’t visit all the Walley World locations at Magic Mountain. The scene in which the Griswold family arrive in its car park was shot in that of a race track, the beautiful Santa Anita Park in Arcadia, California [map], and so super fans will need to take a trip there to complete their National Lampoon’s Vacation experience.

Unlike the cast of Thelma and Louise, the cast of National Lampoon’s Vacation really did visit the Grand Canyon [map]. The Griswolds stop there for a brief spot of sight-seeing and also visit another of America’s great natural sights, and one of its most celebrated film locations, Monument Valley [map]. Monument Valley is best known for featuring in classic Westerns but it crops up in classic road movies too: aside from its appearance in National Lampoon’s Vacation, it can also be seen in Easy Rider. If you want to pitch your wagon there, there is perhaps no better place to stay than Utah’s The View Hotel [map]. Built on the side of the magnificent valley, The View is appropriately named. 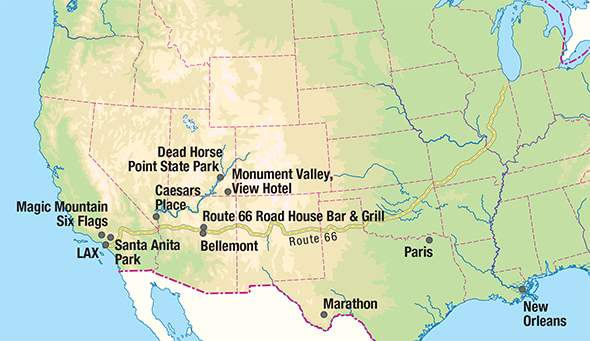 You can win DVDs of all five of Scott's film choices as well as a copy of our USA on the Road guide book in our competition. THIS COMPETITION IS NOW CLOSED.

To read more about what to see in the United States, visit our USA destination pages. See also our guides to the Northern route, from east coast Boston to west coast Washington state, and the Atlantic route, from New York City to Key West, Florida, plus tips on renting a car for your journey, and road trip survival skills.