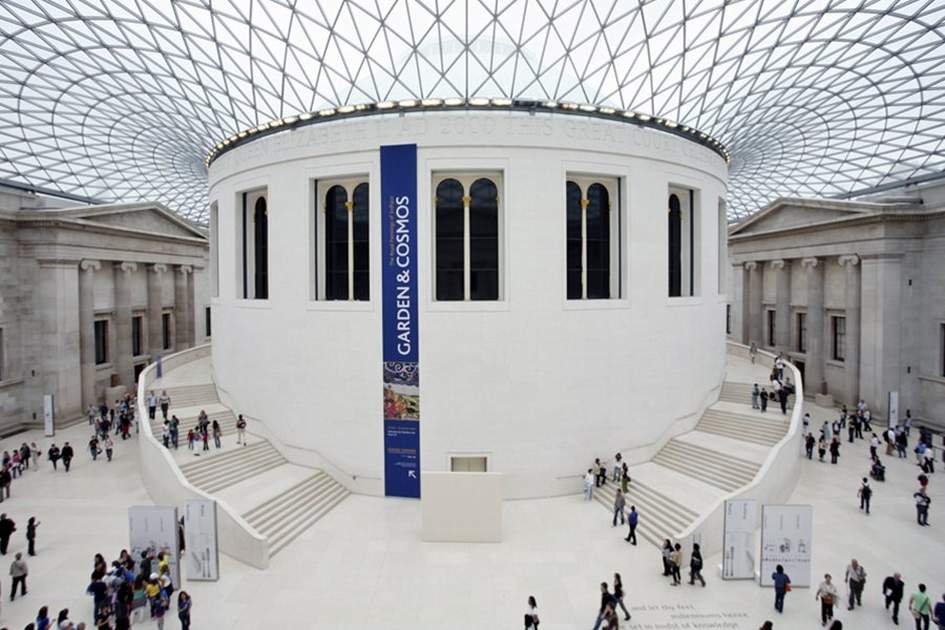 Opened in 1759, this world-class institution on Great Russell Street in London contains some 61⁄2 million objects.

Devote just 60 seconds to each object owned by the British Museum and you’d be there, without sleep or meal breaks, for more than 12 years. Even though only 50,000 objects are on display at any given time, this is not a place to “do” in a couple of hours. It is a treasure house that caters for scholars as well as tourists and, as the scholars do, it is best to concentrate initially on what interests you most. A tour of the highlights is a good start (see below). As you seek out any particular objects in the 100 or so galleries, you will be diverted by enough intriguing displays to justify future visits.

The British Museum is the most traditional of institutions, with most objects in glass cases and few buttons and levers for children to manipulate, but it is rarely boring. The best time to visit is soon after opening. This is also an ideal time to appreciate the Great Court, a dramatic glassed-over space in the heart of the complex, added for the millennium, and the round Reading Room, where Marx and Lenin once studied, which now functions as an ­information and research centre.

The Egyptian mummies: This is the richest collection of Egyptian funerary art ­outside Egypt.

The Sculptures of the Parthenon: Commonly known as the Elgin Marbles, these 5th century BC sculptures have a wondrous muscular detail.

The Rosetta Stone: This granite tablet from the 2nd century BC provided the elusive key to deciphering ancient Egypt’s hieroglyphic script.

The Nereid Monument: The imposing facade of this 4th-century monument from Xanthos in Turkey was reconstructed after an earthquake.

The Mausoleum of Halikarnassos: This giant tomb, finished around 350 BC in southwest Turkey, was one of the Seven Wonders of the Ancient World.

The Sutton Hoo Ship Burial: The richest treasure ever dug from British soil, an early 7th-century longboat likely to have been the burial chamber of an East Anglian king.

The Benin Bronzes: Brass plaques found in Benin City, Nigeria, in 1897. They depict court life and ritual in ­extraordinary detail.

The Cassiobury Park Turret Clock: This intricate 1610 weight-driven clock is part of a remarkable collection of timepieces.

The museum’s vast holdings from the Classical world include the Parthenon Gallery, lined with an exquisitely detailed frieze from the colonnade of the Parthenon, removed from the Acropolis by Lord Elgin, British Ambassador in Constantinople, at the end of the 18th century. The Parthenon was dedicated to the goddess Athena Parthenos and the frieze is said to depict the Great Panathenaia, a procession held every four years in honour of the goddess. It was carved under the direction of the master sculptor Pheidias.

Nearby is the Nereid ­Monument, a magnificent Lycian tomb (c.390–380 BC) from Xanthos, and, in Room 21, fragments and sculptures from the Mausoleum of Halikarnassos (modern day Bodrum; mid-4th century BC), the tomb of Maussollos, considered to have been one of the Seven Wonders of the Ancient World. A large-scale model of the mausoleum shows how it would have looked in its splendid entirety.

This section covers the ancient civilisations of Mesopotamia, Anatolia and the Levant. Among the highlights are tablets containing the inscription of Nebuchadnezzar II, King of Babylon, found in the ruins of Babylon in the early 19th century. Other highlights are the carved Assyrian reliefs and gateway figures from the palaces at Khorsabad, Nineveh and Nimrud.

As well as highly crafted Celtic artefacts and Roman treasures, look out for Lindow Man, a 1st-century man discovered in a peat bog in Cheshire.

Apart from the Sutton Hoo treasure, objects include richly decorated ecclesiastical artefacts such as an intricately decorated 12th-century gilt cross from Germany.

The Egyptian Galleries filled with funerary artefacts are the rooms to see first, simply because they can get wildly
overcrowded as the day goes on – 98 percent of visitors want to see the Egyptian mummies. They’re worth seeing, too: thanks to the enthusiastic plundering by 19th-century explorers, this is the richest collection of Egyptian funerary art outside Egypt. 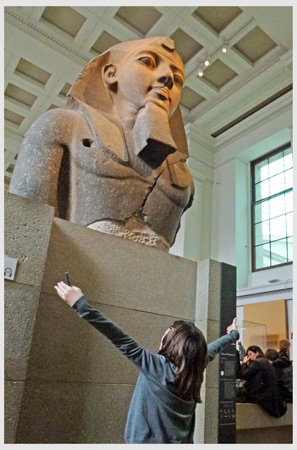 The size and ornamentation of the coffins and sarcophagi are immediately striking. The richly gilded inner coffin of the priestess Henutmehyt, for example, dating from 1250 BC, is a work of considerable art. Scans displayed beside the coffin of Cleopatra (not the Cleopatra) show how well the body inside is preserved, and the process of embalming is explained in detail. Apart from the noble humans who were destined to spend their afterlife in London’s Bloomsbury, there are various mummified cats, dogs, fish and crocodiles, plus amulets and assorted jewellery.

The Sainsbury African Galleries in the basement combine ancient and modern, showing how cultural traditions are still alive today. This is one of the most colourful and vibrant collections in the museum. Of special interest are the Benin Bronzes, from the Kingdom of Benin (now in Nigeria), a powerful state in West Africa between the 13th and 19th centuries. As well as the beautifully detailed bronze plaques depicting life in the royal court there are bronze heads and figures.

Other highlights of this section include Asante goldwork, from the gold-rich Ghanaian kingdom of Asante, Afro-Portuguese ivories, African textiles and funerary screens from the eastern Niger Delta.

The museum has superb collections from Central and North America on the ground floor. There are a number of impressive Olmec statues and other works from around 1000 BC, plus magnificent carved Mayan slabs from the 8th century AD. Relics from the Aztec civilisation include turquoise mosaic work that may have been given to Hernán Cortés by Moctezuma II and a very rare pre-Conquest manuscript painted on deer skin.

A collection of 750,000 coins dates from the 7th century BC to the present day, and there are notes dating back to 14th-century China.

For conservation and space reasons, only a fraction of the museum’s 3 million works on paper are displayed at any one time. Highlights include Old Master prints and drawings, and satires of the 18th and 19th centuries.

The museum’s collections of Chinese, Japanese and Korean artefacts are astonishingly large, with a series of vast galleries given over to them. Exhibits from India include the Amaravati Sculptures (1st–3rd century AD) that adorned a stupa (Buddhist temple) in Andhra Pradesh, southeastern India, and exquisite Mughal miniatures (from 16th–17th century).

For more information on the British Museum, visit www.britishmuseum.org.