The Great Wildebeest Migration in the Maasai Mara 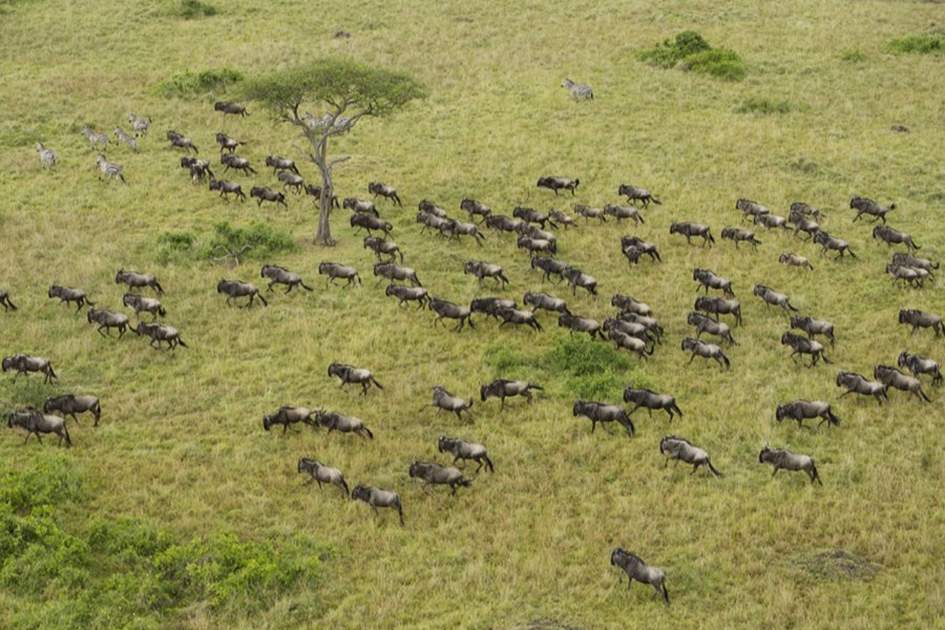 The great wildebeest migration across the Maasai Mara

September is a prime month for observing the great wildebeest migration in Kenya's Maasai Mara. Here's our guide to this amazing natural phenomenon.

Little matches the show provided by the Serengeti-Mara’s wildebeest migration: a company of over 2 million animals, an arena 3,200km (2,000 miles) round, and a non-stop year-long spectacle that has followed a similar pattern for hundreds of thousands of years. At the last count, there were 1.4 million wildebeests in the main cavalcade, accompanied by hundreds of thousands of gazelles, zebras, hartebeest, and another 64,000 species of grazers and browsers.

Dominating this extraordinary natural circus is the blue wildebeest (or white-bearded gnu), whose ungainly appearance and legendarily sheep-like intellect belie its extraordinary ecological success. True, its elongated head may look too big for a creature with such a spindly torso and legs, while its small horns and wispy white beard add to its faintly preposterous visage, but zoologists will point out that few large mammals survive in such numbers anywhere in the world as the wildebeest of the Serengeti-Mara.

Wildebeest are also surprisingly playful, arching their backs as they buck up and down in a manner reminiscent of the Maasai ipid dance, then spinning and falling, or charging about like a pack of excited puppies. Furthermore, the sight – and baaing sound – of tens of thousands of wildebeest trekking across the plains of the Serengeti-Mara is truly inspirational.

Given the option, the wildebeest would probably never come up to the Mara. They would stay down south, on the vast alluvial short-grass plains of the Serengeti, which they prefer because there is virtually no cover for predators.

The wildebeest usually disperse into the southern Serengeti during November, and calve there in January, but they soon mow the grass to stubble, and as the land dries up, they are forced to move northwest, following the bearing of the “long rains”.

The great journey generally has a disorderly start. None of the animals seems to know what’s happening, except for a few individuals in the 1.4 million who must sniff the air, decide it’s time and amble off through the Serengeti’s Western Corridor towards Lake Victoria. The others follow – straggling individuals and small groups – but eventually they bunch into broad lines of march which look like columns of safari ants. They wheel before the lake, moving due north to cross the Mara, Sand and Talek rivers at exactly the same places each year.

This brings them into Kenya, where there will be good grazing in the best-watered section of the ring from the Mara and the dozen other rivers that flow off the western wall of the Rift.

The wildebeest are highly vulnerable to predators launching out of the thickets, so whenever they smell the October “short rains” moving up from the south, the hordes reform and restart the migration south. This time, for some unknown reason, the lines are narrower and more dispersed for the southeastern arc, back to where it all started.

The most dramatic aspect of the migration is the multiple crossings of the Mara River that usually take place between July/August and September/October. Contrary to popular impressions, these crossings are not one-off directional events that occur as the migration enters and leaves the Mara.

Throughout the season, herds of a few hundred or thousand wildebeest regularly cross back and forth, using a total of eight favoured crossing points most regularly along the 5km (3-mile) stretch upriver of the Mara’s confluence with the Talek. Often preceded by several false starts, these crossings are breathless, adrenalin-charged spectacles whose drama is heightened by the outsized crocodiles that weave gape-mouthed through the crossing herd, ready to snatch any individual that makes a false move.

To find out more about visiting the Maasai Mara, buy one of our fantastic Kenya travel guides

Your local travel organizer for Kenya