The Hagia Sophia: a journey through time

The Hagia Sophia is one of the most beautiful buildings in the world. We take a journey through time to explore its history, present and future. 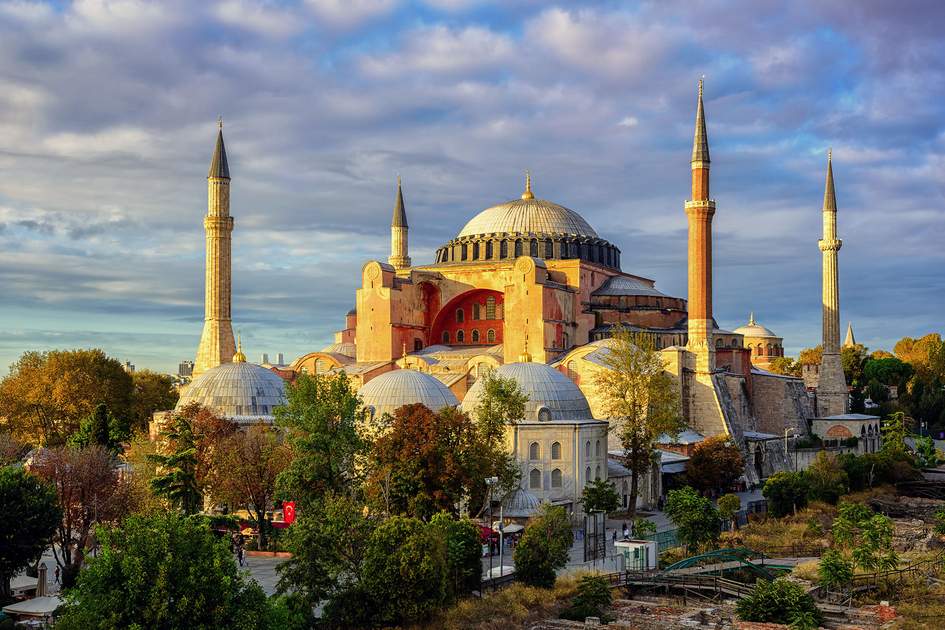 Over its 1500-year history, the Hagia Sophia – one of the most architecturally significant monuments in Istanbul – has been at the center of much religious and political controversy. This July, it hit the headlines again when the Turkish government amended its status from a museum into a mosque, a move that provoked condemnation from the Pope, UNESCO, and the World Council of Churches, and anger from many countries, notably Greece. There is also plenty of support for the change, particularly within Turkey and among much of the Islamic world.

But what is the Hagia Sophia, and why does it inspire such politically charged feelings? To find out, we’re going to explore the chequered history of this ancient building, which is irrevocably linked with the history of Istanbul itself.

The Eastern Roman Empire – romantically known as Byzantium – was founded in 330 AD by Emperor Constantine the Great, after whom the city of Constantinople (now Istanbul) is named. Thirty years later, in 360, the first Church of St Sophia was built on the site of the current Hagia Sophia, but this initial structure was destroyed by fire in riots during the early years of the Byzantine Empire. The next incarnation of the Hagia Sophia, however, was built to last.

By the 520s, the throne had passed to Emperor Justinian and Empress Theodora. They were of relatively humble origins: Justinian’s father had been in the royal guard, while Theodora has been described as Constantinople’s “most notorious courtesan” (among other, less polite, epithets). The early years of their rule saw Justinian recodifying the law and undertaking large-scale construction projects – both of which required major taxation programs often overseen by corrupt officials.

It’s hardly surprising, then, that Justinian and Theodora were unpopular with their subjects, and this discontent boiled over into a major revolt in 532. In the ensuing chaos, the existing Church of St Sophia was destroyed, along with much of the city. The subsequent rebuilding program ushered in the most glorious architectural era in Byzantium’s history, and at its heart was the Hagia Sophia. 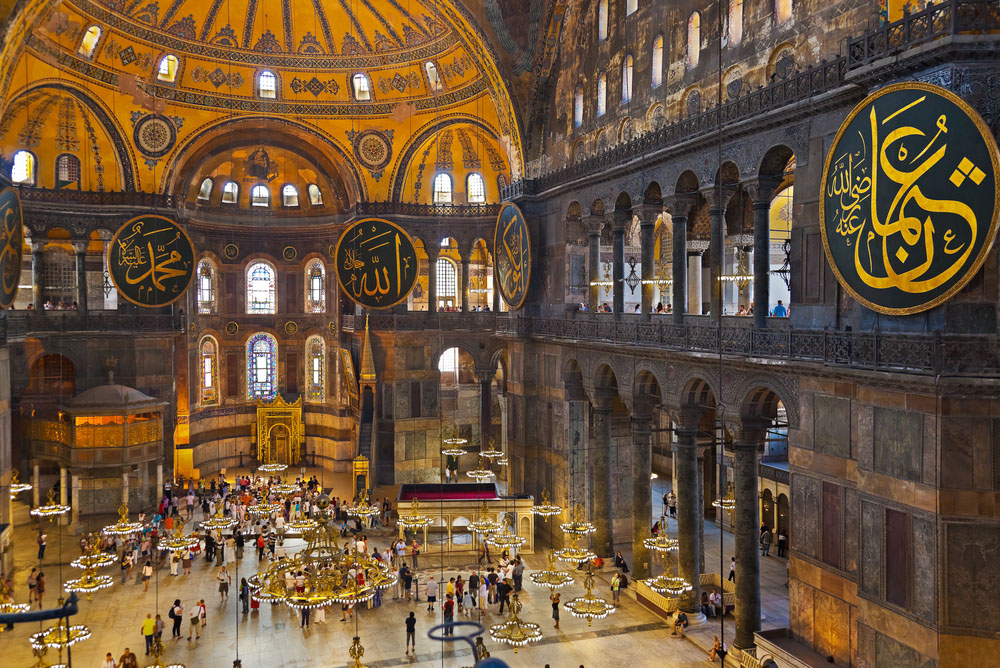 Justinian was determined that his new Hagia Sophia would be the most magnificent building in the world, and he hired two leading architects to make his dream a reality. The design of the church was revolutionary at the time: it was square rather than rectangular, and its most important feature was not to be the eastern end of the building – as was then standard – but the immense dome above.

Construction was completed in just six years; one (unconfirmed) account suggests that Justinian was so eager to see the work finished that he set two rival building teams in motion at once, one constructing the north side and one the south. Be that as it may, Justinian was certainly pleased with the result: on its completion, he is reported to have exclaimed, “Solomon, I have surpassed thee!”

Justinian had good reason to be pleased: the Hagia Sophia was indeed magnificent. Materials from all over the Byzantine Empire had been imported to enrich it: gold, bronze and precious stones, of course, and columns of marble recycled from classical temples in Rome and Ephesus. Colored stones from Lakonia, Libya and Lebanon formed beautiful mosaics, many of which can still be seen today.

To top it off, the Hagia Sophia contained some of the most important relics of the medieval world: Christ’s swaddling clothes, the table on which the Last Supper was served, and – holiest of all – the True Cross itself, which had been recovered from the Holy Land two centuries previously by Helena, mother of Constantine the Great. 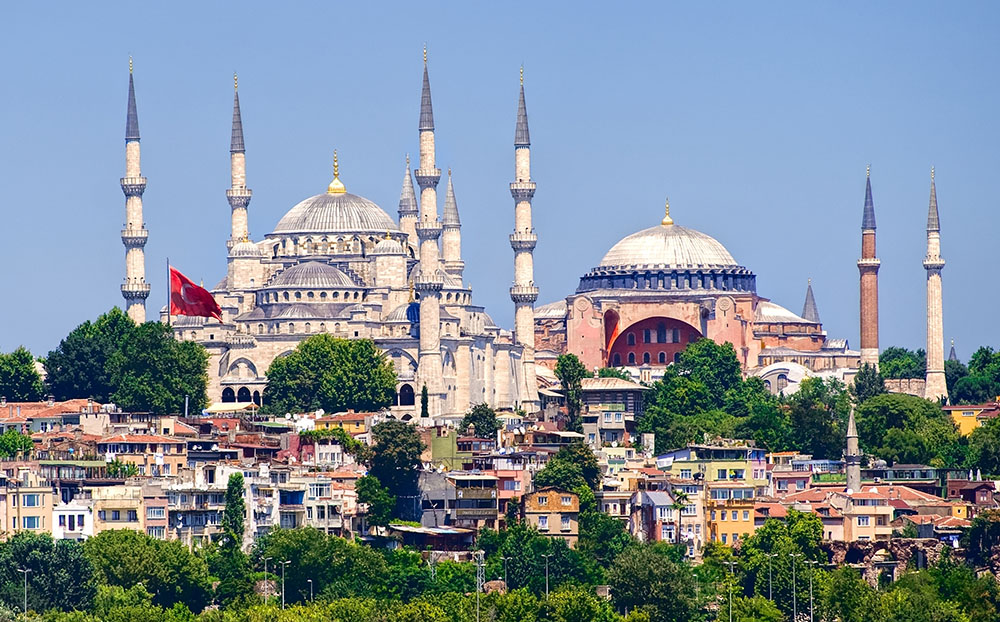 View to Blue Mosque and Hagia Sophia (in the background) in Istanbul. Photo: Boris Stroujko/Shutterstock

Over the following centuries, the Hagia Sophia suffered repeated damage from natural disasters including earthquakes and fires, as well as from the iconoclastic movement that swept Constantinople in the 8th century, in which many of the church’s religious icons were destroyed. But perhaps the most devastating event in the first half of the Hagia Sophia’s history came from an unexpected quarter: the Christian army which invaded Byzantium in the Fourth Crusade of 1204.

All the Crusades sent from Western Europe eastward to the Holy Land are an ugly chapter in history, but the Fourth Crusade stands out as a particularly pointless endeavor: its participants, thanks to the political machinations of the Venetian Doge, found themselves occupying and desecrating the center of Eastern Christianity rather than their intended purpose of recovering Jerusalem. The ensuing looting and destruction of Constantinople’s treasures has been termed one of the most catastrophic losses to civilization in all history.

The crusaders showed the Hagia Sophia itself little respect: like much of the city, its icons, relics, fine arts, and treasures were stolen or destroyed. The True Cross had by this time been returned to Jerusalem, but some fragments remained in the Hagia Sophia, and these were distributed widely across Europe. Far worse, the crusaders massacred those who had sought sanctuary within the church, brought horses and other animals into the sacred space, and – most horrifying to one eyewitness – installed a “common harlot on the Patriarch’s chair”.

In the aftermath of the sack of Constantinople, Byzantium became subject to a Western emperor who converted the Hagia Sophia into a Roman Catholic cathedral. This Latin occupation of Constantinople lasted only 50 years, after which the rightful emperor was restored, and the Hagia Sophia reverted to Eastern Orthodoxy. The church required serious renovation after its repurposing, and earthquakes in the 14th century further contributed to its dilapidation, though it remained a priority for the emperors, who funded several large-scale restoration projects. 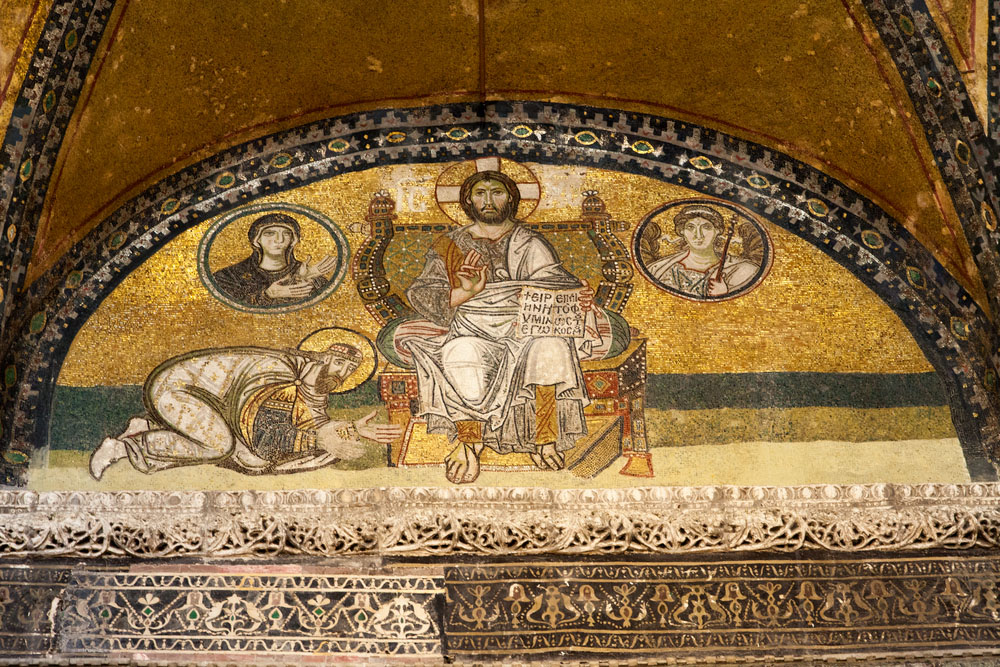 Byzantium itself limped on until 1453, when the Ottoman forces of Sultan Mehmed II took the city and brought the Eastern Roman Empire’s 1100-year history to an end. Again, the invading forces plundered the city amid scenes of violent bloodshed, those sheltering in the Hagia Sophia were massacred, and the church’s treasures were looted – after which the Sultan himself entered and gave orders for the building to be converted into a mosque. The next chapter in the history of the Hagia Sophia had begun.

Over the following years, the Christian icons and imagery in the Hagia Sophia were concealed, while a mihrab was installed and the now iconic minarets were added. In the centuries of Ottoman rule, the sultans treated the Hagia Sophia (now known as the Aya Sofya) with great respect, funding restoration and renovation programs where necessary, and ensuring that the entire structure – including its Christian legacy – was preserved and protected. It is thought by some experts that the Aya Sofya would have collapsed in the 16th century had it not been for strengthening works undertaken by Mimar Sinan, chief architect of Sultan Suleiman the Magnificent, who is also responsible for many of Istanbul’s finest Ottoman buildings, including the beautiful Suleymaniye Mosque.

The Ottoman Empire collapsed in the wake of World War I, and though there was talk at the time among the Allied forces that briefly occupied Constantinople of reconverting the Aya Sofya into a church, no serious efforts were made. Instead, in 1934, under the Republic of Turkey – founded by the statesman Mustafa Atatürk – the Aya Sofya was designated a museum, swiftly becoming one of the most popular tourist sites in Turkey. 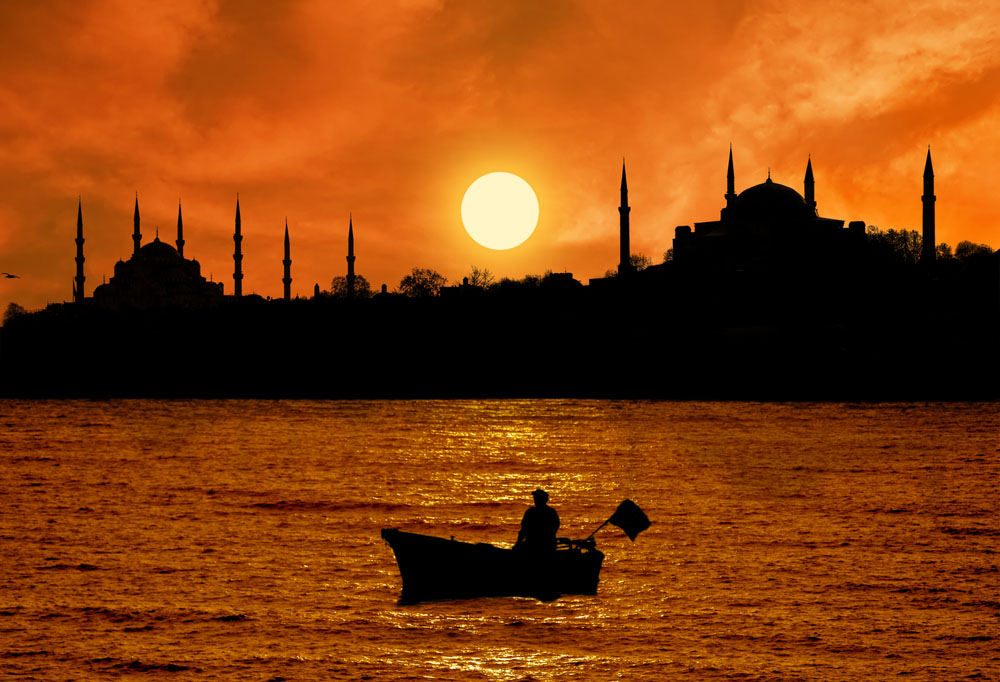 Sunset over Istanbul with the Hagia Sophia on the right side. Photo: nexus 7/Shutterstock

The 21st century saw repeated calls for the Aya Sofya to resume its status as a mosque, and on July 10 this year, the Turkish government agreed to cancel the building’s designation as a museum. The first daily prayers were held in the Aya Sofya on July 24.

The Turkish government has pledged that the Christian imagery within the Aya Sofya will be protected and maintained, and will simply be covered during prayer times. As a mosque, the Aya Sofya will also be free to enter. Right now, with coronavirus still a worldwide concern, tourist numbers at the site are likely to be low – but some thought will need to be given to managing visitors in the future. One thing is for certain: the Aya Sofya remains a hugely significant site for Muslims and Christians alike, and this magnificent ancient structure will always be on Istanbul’s must-see list.