The Music of Brazil: Samba 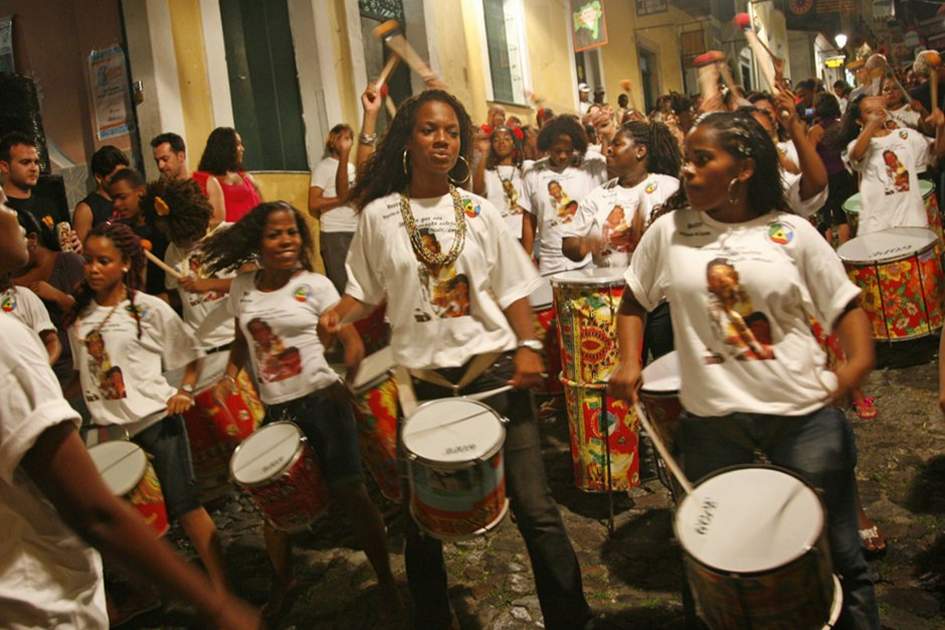 On a Saturday night in any sizeable Brazilian town a vast musical choice presents itself. Will you tap cutlery to a samba pagode in a tile-floored bar, or dance hip-to-hip to the simple rhythm of the forró? Will you try the tango-like ballroom virtuosity of the gafieira, or converse over the twinkling swirls of choro played on mandolins and violas? Alternatively, you could smooch to sensuous bossa novas in the bars of Ipanema once haunted by 'The Girl'. Or you could wait in line to experience ear-bleeding rock bands or hear exhilarating drum-and-bass, hip-hop and electronica DJs perform in small city clubs and bars, or hangar-like favela venues from where baile-funk spins through cyberspace to Europe’s hippest nightspots.

The big names of Brazilian music

In nightclubs, jazz takes turns with the melancholy of Portuguese fado, Brazilian torch singers, and the legends of MPB (Musica Popular Brasileira) such as Roberto Carlos and Elis Regina, and younger favorites, such as Marisa Monte and Céu, perform poetic anthems. Leading lights of the 1970s Tropicalia movement continue to draw young audiences: Gilberto Gil and his collaborator Caetano Veloso still woo with sensual, laid-back singing and eclectic music; Veloso also joins his son Moreno’s neo-Tropicalia experimentations; and Tropicalia divas Gal Costa and Maria Bethania continue to cast their spells. The ageless Jorge Ben Jor, Brazil’s James Brown, is seeing his back catalogue of funk-samba cannibalized by a new generation of producers around the world.

The origins of samba

The word samba derives from the Angolan semba, a synonym for umbigada – literally, a navel thrust. It was danced originally in a circle, with a soloist in the middle who clapped and danced, then stopped in front of one person, and, with a cheeky umbigada, swapped places. Variations of umbigadas – samba de roda, jongo, tambor-de-crioulo, batuque, and caxambu –  survive virtually unchanged today in Afro-Brazilian communities all over Brazil.

The Afro-Brazilian rhythms made their first, tentative foray into the salons of white urban society in the late 18th century in the form of the lundu, a toned-down couple dance accompanied by viola and sitar. In the second half of the 19th century, slave bands performing on country plantations and in city ballrooms were obliged to copy fashionable European dance rhythms like the polka and the mazurka. But playing for themselves, they injected their own sensuous thrusts and swings, and from those sessions emerged the maxixe, an extravagant, rhythmic form of tango. Fred Astaire’s version in the 1933 Hollywood film Flying Down to Rio coincided with the maxixe’s decline in Rio in the face of samba’s increasing popularity in Carnival parades. In today’s gafieiras (dance halls), couples still mix maxixes, habaneras, choros, and sambas with extravagant virtuosity.

Samba’s official history began in 1916, with Pelo Telefone, the first samba on record and an instant hit at Carnival that year. The first samba school, composed of scores of percussionists whose rhythms drive the revelers, was founded in the 1930s, and today every Brazilian town and city has its own. The oldest school, Mangueira, is acknowledged in scores of songs, and the 70-something singer, Elza Soares, whose voice is as huskily sexy as in her 1960s heyday, today mixes sambas and Mangueira tributes with hip-hop fusions.

Story samba and other genres

The best-known samba form is samba enredo (story-samba), sung by an amplified voice accompanied by a guitar and cavaquinho, to a responding chorus of the thousands of voices in the desfile (procession) who 'converse' with the drummers sashaying in their finery. Other subgenres include samba do morro, played on percussion instruments only; samba do breque (break), which pauses abruptly to allow a wry interjection, then starts again; and the perennial ballad version, samba-canção, the 'Frank Sinatra of sambas', which is popular in clubs and bars.

With musical frontiers opened and fashions flashing by, samba fusions are virtually limitless. But samba-rock, samba-funk, samba-reggae, and samba-rap must bow to the domination of samba-pagode, the sound of Rio’s favelas since the 1980s. Performed at informal get-togethers, it involves all ages. Cavaquinhos and banjos sing out the melodies, and dancers are driven by pandeiro (frame drum) and tamborim beats. In the late 1980s, David Byrne (ex-Talking Heads) released a significant set of tasters on his Luaka Bop compilation, O Samba. The compelling collection of classic samba singers it introduced included Zeca Pagodinho, today’s pagode idol.

Pagodinho (Little Pagode Singer) was a sambista from birth. He packs his infectious songs with slang and performs them as casually as a storyteller in a bar. Superstar Seu Jorge, who emerged from a generation raised on hip-hop, pays homage to Pagodhina, but his favorite is samba partido-alto (high party), with its addictive percussion and sharp beats created with palm-slaps on a pandeiro.

Samba, like most great musical genres, is wide open to adaptation, and many samba singers now also include bossa novas in their repertoires. Jazz samba is today an international fusion style, and Tania Maria one of its most popular exponents outside Brazil. The veteran 1960s samba-jazz group Os Ipanemas enjoyed a recent Buena Vista-style comeback with their album Samba is Our Gift, which drops trombone and saxophone into the samba mould.

Where to experience samba

While Rio holds the world records for numbers of Carnival visitors, samba schools and gyrating feather-clad dancers, Salvador in Bahia offers a more interactive experience in the colonial streets, which echo to the sound of blocos (formation drummers). But a new rival to Salvador is Olinda, the colonial town attached to Recife (capital of Pernambuco state), whose local frevo rhythm outranks even Rio’s sambas in intensity.

For more on Brazilian music head to the music chapter in the Insight Guide to Brazil, or if you're planning to visit Brazil take a look at our online Brazil guide...