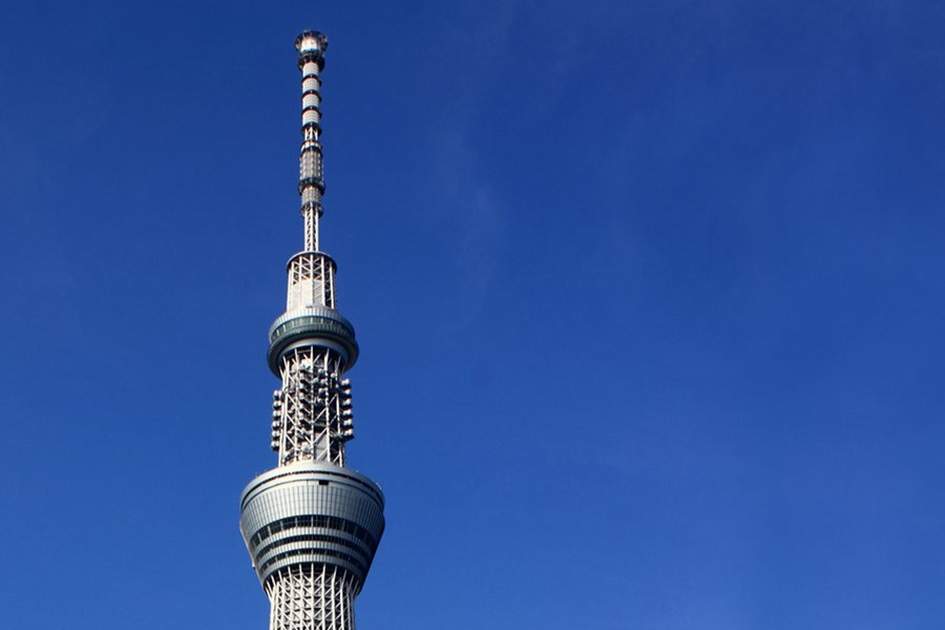 Situated in the Sumida ward, 7.5 km from Tokyo central station, Japan's newest and tallest tower, the Tokyo Skytree, has provided the city with another ultra-high level viewing platform.  This elegant structure’s dual purpose is as a television tower, a necessity for the city as existing broadcast towers are no longer tall enough to reach over the mass of high-rise buildings.

Construction began in 2008 and finished last year with the last elements of the 634m tower slotted into place. As of the 22nd May the Skytree opens to the general public.

Until 10th July however, all visitors will need to have purchased their tickets in advance through the online agent. To use this system, payment must be made with a Japanese registered credit card. From 11th July it will be possible to buy tickets on the day, although pre-booking is advised if possible.

The designers of the building chose the finished height of 634m intentionally. When spoken in Japanese the figure is pronounced "mu-sa-shi" and Musashi is the old province where Sumida and the Tree now reside. The Skytree's name was not decided by the design team but by a nationwide competition which saw other possible monikers such as the ‘Mirai Tree’, ‘Rising East Tower’ and ‘Yuemi Yagura’ fall to the wayside.

If you can't make it to Tokyo here are some of our other favourite city observation points.

This is currently the best place within the centre of the city to take in the wonder that is Manhattan's skyline. Why would you ascend the Empire State Building when it is itself so integral to the skyline of the city? The 3 level observation deck has been dubbed "Top of the Rock" after the Rockefeller Center in which the GE Building rises.

Sitting atop 488m of twisting, delicate looking metalwork sits the world’s highest observation platform.  An observation tower that is a destination in itself, the Canton Tower has an outdoor observatory at a feet itching altitude and a unique system of bubble like cars which run around the edge of the observation deck allowing a comfortable tour of the views across the region. The structure itself is especially beautiful at night when it is lit with thousands of LED lights.

Not sitting in the heart of the city has not deterred the crowds heading to one of Southeast Asia's tallest buildings. An outdoor observation deck at 392m is open when the weather allows. Building enthusiasts can relish the opportunity to gaze upon the world’s largest and heaviest visible tuned mass damper: a pendulum which sways within the building battling the motion created by the wind and, exceptionally rarely, earthquakes.

Having just emerged from a sorely needed repaint in bold "Galaxy Gold”, the icon of the Pacific Northwest celebrates its 50 years of views over Puget Sound to the west and Mt Rainer to the south this year. With the unpredictability of the weather in this region we wish you the best of luck choosing a clear day. A retro delight.

Sitting upon the ‘Magnificent Mile’ we rate it slightly above the taller Willis Towers (née Sear's) rival across town. The views across the city seem better framed and you have a clearer view of the lake's shoreline.  It is also nearer other sights and restaurants than Willis.

Despite having received such bad reception upon opening that it halted skyscraper development across the city for years, the building is a seriously undervalued vantage point. Ascending the Eiffel Tower is an experience BUT, you are not seeing the Eiffel Tower! Journey up the 209m Tour Montparnasse and not only do you get the beauty of Paris laid out before you (either from inside or on the roof's helipad), but you are not seeing the building many people would like removed from the Parisian skyline!

It started the trend of 'the observation wheel' back in 2000, which now sees copycat and larger and more luxurious structures in many major cities across the globe. But it was the sheer bravery of placing the thing slap bang in the heart of London that means the London Eye has yet to loose its crown. Originally intended as a temporary feature (as was the Eiffel Tower), its continued success leads to its ongoing residence (and its legendary queues). Book in advance.

This itinerary-based guide details 16 of the city's best walks and tours, written by a local expert, for that personal touch and insider information. All itineraries are arranged by theme for a truly tailor-made travel experience, so whether you are an art enthusiast, gourmet, historian, shopaholic, architecture buff, scientist, or simply want to escape the crowds; there is a tour to suit.